From Oscar Micheaux to Karin Slaughter, Great Crime Writing in the South

There is perhaps no more image-obsessed city in America than Atlanta, Georgia—the city adopts and drops slogans about itself every few years. Perhaps not so surprising then that Tom Wolfe opted for Atlanta as the setting for his doorstopper 1998 novel A Man in Full. The Olympic City appealed to Wolfe—its embodiment of a certain version of the American Dream contrasting with its precarious racial dynamic, elements which segue in the plot line of an alleged rape of a white heiress by a black sports star. That case opens the door onto a world of crooked politicians and grasping corporate types. It’s fair to say that much of Atlanta society, particular in the upscale Buckhead district, didn’t think too much of the book. Former city Mayor Sam Massell admitted he hadn’t actually bothered to read it before rescinding a lunch invitation he’d previously extended to Wolfe. Though maybe it was all a storm in a mint julep glass—Frederick Allen, a local author and city historian told the New York Times: “To have someone of Tom Wolfe’s stature hold you (Atlanta) up to scorn is really the Good Housekeeping seal of approval. He wouldn’t do this to Birmingham or Orlando.” No, he wouldn’t. Atlanta is a little different…

If Atlanta had done nothing else to earn the title of a Crime City then it would have been a winner because of Jacques Futrelle. Who, I hear you cry (even those of you in Atlanta)? Born in 1837 in Pike County, just outside the then-city limits, Futrelle was a newspaperman who spent his leisure hours writing mysteries. Some of them are pretty good; indeed I’d argue that The Chase of the Golden Plate (1906) is seriously clever, funny and original. Altogether Futrelle wrote half a dozen mystery novels and a bunch of short stories, many of which feature his characters “The Supreme Police Intelligence” and the scientist Professor Augustus S.F.X. Van Dusen, also known as “The Thinking Machine,” whose application of logic would invariably solve the crime. It has been suggested by biographers (though she never confirmed it herself) that Van Dusen was the inspiration for Agatha Christie to start writing crime novels and also that he was a major influence on G.K. Chesterton and his priest-detective Father Brown series.

Futrelle was making good money from his stories, was able to give up journalism to concentrate on his books, and had a bright future as a mystery novelist ahead of him. He decided to invest some of the proceeds from his crime writing in taking his wife on a dream holiday to Europe in 1912. The final highlight was the voyage home to Atlanta aboard a new liner, The Titantic. That fateful April night in the dark and cold Atlantic Jacques Futrelle secured his wife a place in an escaping lifeboat ensuring she would survive. Futrelle was last seen smoking a final cigar on deck with John Jacob Astor IV. Neither man was seen alive again.

Jumping forward a century Atlanta’s crime writing scene is dominated by one author. You don’t hear the word “aptronym” enough—a person’s name that is regarded as amusingly appropriate to their occupation. There really was once a florist called Mrs. Gardener, a specialist on arctic conditions called Mr. Snowman and, in England, a leading campaigner for prison reform is Frances Crook! So aptronym enthusiasts everywhere (Master Keeneye and Mistress Wellspotted, you know who you are) can thank Atlanta for the city’s bestselling crime novelist Karin Slaughter, who is living and prodigious proof of nominative determinism. Slaughter, Georgia-born and an Atlanta resident, is well known for her Grant County series, which takes place in a fictional Georgia town. However, her phenomenally successful Will Trent books are set in Atlanta and feature the same named Georgia Bureau of Investigation special agent. The first Will Trent book, Triptych (2006) takes the reader into Atlanta’s tough housing projects. The second, Fractured (2008), rises swiftly up the city’s social curve to investigate a spate of kidnappings of some of Atlanta’s wealthiest citizens. Slaughter has now given Trent eight outings, each taking him through another slice of Atlanta society.

Atlanta has not, so far, been well served by TV as far as crime goes—ok, Matlock’s law practice was in Atlanta, but that was back in the 1980s and 90s and never built a following outside the US (or with anyone younger than 50). But Atlanta is up with the best of them in the new world of true crime podcasts. Following the success of This American Life true crime spin-off Serial, Bill Rankin, senior legal affairs writer with the Atlanta Journal-Constitution produced Breakdown, an investigation into a murder conviction, sharing his own uncertainties about the case. Breakdown looks into the case of Justin Chapman, a man accused of homicide in the small west Georgia town of Bremen. Chapman was convicted of killing his neighbor by burning down his home. There’s deep reportage expertise on display in Breakdown—it’s a podcast, but you’ll come away with a great respect, and hopefully a determination to keep supporting the serious expertise a paper like the AJ-C can muster on legal issues. The podcast has been so successful it’s continued with series two focusing on Justin Ross Harris, accused of intentionally leaving his son Cooper strapped into his car seat on a hot June Cobb County day in 2014, leading to the child’s death in the super-heated vehicle. Series 3 sees AJ-C reporter Johnny Edwards investigate an Atlanta doctor accused of repeatedly sexually abusing his patients, yet still able to practice medicine locally and perhaps being shielded by the city’s medical establishment.

If there’s one element of Atlanta’s history many readers round the world are aware of then it’s the city’s segregation legacy and abhorrent history of race relations. It’s been a constant theme in Atlanta crime writing, whether in non-fiction or fiction. Rebecca Burns’s Rage in the Gate (2011) recounts the terrible summer of 1906 when Atlanta’s reputation as the “Gate City of the New South,” a place where relative, yet segregated, racial harmony presided was shattered in what Burns argues were the most brutal race riots in the history of America. At least two dozen African-Americans were killed and the events covered up or awkwardly explained away for decades afterwards.

The notorious Atlanta Child Murders saw 28 African-American children and adolescents murdered between 1979 and 1981. Atlanta police arrested local resident Wayne Williams for the killing of two adults. He was given life for those homicides. But the police believe he was also responsible for most, if not all, of the child murders. From his cell Williams maintains his innocence. Two novelizations of the horrific killings and their effect on Atlanta’s black community have been published and both are excellent—Toni Cade Bambara’s Those Bones Are Not My Child (2000) and Tayari Jones’s Leaving Atlanta (2003).

More recent, but still rooted in Atlanta’s segregated past, Thomas Mullen’s Darktown (2016) grips from the start. Darktown is a novel set in 1948 featuring officers Boggs and Smith, two of Atlanta’s initial eight black policemen. They were begrudged by their white colleagues, forbidden patrol cars, guns or to enter white-staffed stations by the front door. Mullen’s recreation of their harsh world—hated by their fellow officers of a different color and often distrusted by their own community, the vile nuances of institutionalized racism, the disgusting levels of segregation stooped to in order to keep the races apart, are well described and often harrowing. However, the core of the novel is a superb murder investigation that takes place across the post-war city. Anyone who has read Darktown will not be surprised to hear that Sony TV is currently making it into a series starring Jamie Foxx.

And finally a tribute to Oscar Micheaux, a man often forgotten nowadays and largely written out of American movie history. Micheaux is a truly fascinating character—author, publisher, screenwriter, homesteader, and regarded as the first major African-American feature filmmaker. Micheaux was born in Illinois in 1884, the son of a man who himself had been born enslaved. His youth is a classic up-by-the-bootstraps American tale—working in the Chicago stockyards, a shoeshine booth, as a Pullman porter, all before moving to South Dakota to become a homesteader. He also carved a career for himself as an author, and then a silent filmmaker founding the Micheaux Film & Book Company, which made over 40 silent movies, mostly with all-black casts in what were then called “race films.” A remarkable man whose African-American characters, both on the page and the screen, largely avoided the narrow stereotypes of the first decades of the 20th century, instead presenting as multi-layered and complex human beings.

But most important to us is his 528-page novel and movie The Forged Note: A Romance of the Darker Races (1915). Just over a century on from its publication it’s still an engrossing, though not always easy read (the language can at times appear a little stilted to contemporary readers). Micheaux’s novels invariably included leading characters who were proxies for his own experiences and thoughts. In The Forged Note that character is Wyeth, a black homesteader who moves to the southern city of Attalia (a thinly disguised Atlanta). Wyeth is a self-declared “race man,” a disciple of Booker T. Washington (to whom the book is dedicated and who died that year) and determined to become a member of Attalia’s burgeoning new black middle class. The Forged Note deals with a number of crimes, all of them difficult to deal with—a lynching, an African-American falsely accused of the murder of a white girl, Southern anti-Semitism, and the problem of black-on-black violence in Attalia.

In 1915 Oscar Micheaux, a great chronicler of his times, looked around the United States for a city that embodied the issues he thought most compelling—the touchstone of problematic race relations in the South at the time; a city with a burgeoning black and white middle class with strong entrepreneurial drive; a city not best served by its self-serving politicians; a city putting on a growth spurt. He chose Atlanta. Nearly a century later Tom Wolfe, without doubt one of the best chroniclers of his own times, looked across America for a city that embodied the American Dream at the end of the 20th century and he too settled on Atlanta. A century apart both authors, and plenty in between them, have dissected Atlanta society and chosen crime as a way to do that, to get beneath the skin of the place. It’s not a process expected to finish anytime soon. 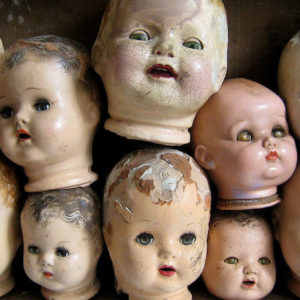 Fiona Barton, The Child (Berkley) A brief item in a London newspaper reports that the skeleton of an infant has been found...
© LitHub
Back to top