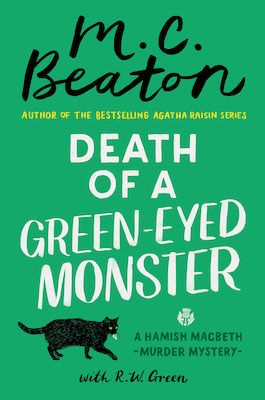 The following is an exclusive excerpt from Death of a Green-Eyed Monster, by M.C. Beaton with R.W. Green. Everyone's favorite unambitious Scottish detective, Sergeant Hamish Macbeth, is back! And he's about to marry the love of his life, constable, Dorothy McIver. But a murder in his town of Lochdubh might get in the way of the celebration...

“He’s dead! He’s dead!” Dougie Tennant was squatting on the ground near his petrol pumps, rocking back and forth.

Hamish moved to Dougie’s side and folded his lanky frame to kneel on one knee beside his friend. “Calm down now, Dougie. What’s going on here? Who’s dead?”

Hamish looked over at Dorothy, then nodded towards Dougie. She took his place beside the distraught mechanic, speaking slowly and quietly, soothing and calming him. Leaving Dorothy to deal with Dougie, Hamish walked round the back of the car and approached the driver’s door. In the wing mirror he could just make out the shape of a shoulder—a figure lying across the front seats. He took a quick, cautious glance through the open window, then instinctively ducked back out of harm’s way. Then he relaxed. No harm was going to come from the man lying inside the car. Dougie was right: He was dead—the neat bullet hole in the side of his head said so. Although he couldn’t actually see it, Hamish knew that the exit wound on the other side of the head would be far from neat. The splatter of blood and gore on the passenger seat and in the footwell was testament to that. Yet he needed to confirm that there really were no signs of life. He reached in and felt for a pulse. There was none.

Why did this have  to happen now? He had been having a grand day. The sun was shining. The spring was promising some fine weather. He was about to get married, for heaven’s sake! The last thing he wanted to be dealing with was a murder. The heavy squad would be up from Strathbane, maybe even from Glasgow, blundering around and upsetting the locals. This was a disaster. Aye, he thought to himself, and not so good for the poor devil in the car, either. What was he doing here in the Highlands? And what had he done to make someone want to murder him?

The previous day had started out blissfully, with murder the farthest thing from Hamish’s mind. He and Dorothy had paid a brief visit to the church for yet another chat with the minister, Mr. Wellington, who seemed more determined than anyone else that everything should be absolutely right for their big day. He regarded this as the most important wedding he had ever conducted in Lochdubh.

This meeting had been the most recent of several since they had first approached him the morning after they became engaged. On that day, they had met with both the minister and his wife, and Dorothy had been concerned about how to let everyone know they were engaged.

“That’s not something you need worry about at all,” the minister said with a smile.

“You have walked into the manse together in your civilian clothes, and you wearing his ring,” Mrs. Wellington noted. “If I am any judge of the way that tongues wag around here—and I am—the whole village will know by the time you get back to the station.”

Just as Mrs. Wellington had  predicted,  word  spread  like wildfire, sending the residents of Lochdubh scurrying  to cupboards and attic spaces to locate and dust off the toasters, wine glasses, serving dishes, and ceramic leaping- salmon ornaments that had been returned after Hamish had called off his previous engagement. There were those who shook their heads sagely and issued dire predictions about what a challenge this new lassie would be for Hamish. She had expensive tastes, did she not? She liked fancy clothes, fancy food, fancy wine, and all of her creature comforts.  Mrs. Mackenzie’s place hadn’t been good enough for her, had it? When she saw Tommel Castle, she had to stay there. There’s no way she would ever end up living with Hamish in the draughty old police station. She’d be wanting something far better than that once they were married. She might look like butter wouldn’t melt in her mouth, but there was another side to Macbeth’s new fiancée. So went the  endless rounds of gossip, dismissed out of hand by a buoyant Hamish whenever he heard whispers, his starry eyes now looking with undiluted optimism towards a blissful future with his beloved Dorothy.

The winter snow slowly thawed and soon the only patches of white to be seen by the roadside were not the last crusty remains of lingering snowdrifts but rather the delicate petals of wood anemones and cuckoo flowers. Then came the blue- bells, and Hamish pointed out a crowd of their nodding sapphire caps near the base of the Faraway Tree as he and Dorothy walked back to the station after their latest visit to Mr. Wellington.

“There’s some around here call them ‘the fairy flowers,’ ” he said. “Sometimes the bells grow in white, and they say it’s because a fairy has been visiting.”

“You don’t believe any of that old nonsense, do you?” Dorothy giggled.

“Not me, but there’s plenty as do. It pays to give  them  that believe in fairies, ghosts, and witches a wee bit of respect, though. Not all of them are completely bonkers.”

Hamish changed into his uniform at the station, then drove Dorothy to Tommel Castle to do likewise, before they set off to talk to a shopkeeper in Braikie about an attempted break-in. Leaving Lugs and Sonsie in the back of the Land Rover, Hamish chatted to Silas while Dorothy was getting changed.

“We have two guests at the moment who are a wee bit strange,” said Silas. “Not like most of our usual clients at all.”

“What have they been up to?”

“Nothing as far as I can tell, but you should check them out. They’re in the car park.”

Hamish walked outside and saw the two men standing together. One was tall, dark-haired, and slim, neatly dressed in a sweater and jeans. The other was shorter, heavily muscled, with a shaved head. He was wearing a black bomber jacket and sweat pants. Gold hung like anchor chains around his neck. Both men were holding handfuls of cash, and the taller one was swigging from a bottle of Coke.

“When I see two men  in  a  car  park  counting  cash,”  said Hamish, walking towards them, “it aye makes me a bit suspicious.”

“This is none of your business,” the thickset man sneered at Hamish. He had the guttural growl of a Glasgow accent. “Keep yer nose oot.”

“Take it easy, guys.” The other man had a relaxed American drawl. “There’s nothing going on here, Officer—just a little wager between two friends.”

Hamish looked at the two cars beside which the men were standing. The closer one was a silver Aston Martin. The farther one was a large yellow sports car of a make that he didn’t recognise.

“Aye, just a wee bet,” the Glaswegian smirked. “More than your week’s wages, though. We need an honest man to hold the pot. Care to help us oot, Sergeant?”

“The bet’s off,” said Hamish. “Put your money away. If either of you tries racing round any part of the North Coast Five Hundred in either of these cars, I will get to know about it in less time than it takes you to fill your tanks. I will then come after you and that will not end well for you. Do you understand?”

“You listen to me, you jumped-up teuchter,” snarled the Glaswegian. “We can do—”

“Wow!” Dorothy, now in uniform, approached the men. “Aston DB11. Nice. This one has the Mercedes vee-eight engine, right?”

“That’s right.” The American smiled. “A little down on power compared to its vee-twelve big brother, but it’s a lot lighter. You sure know your cars, young lady.”

“Och, I’ve always loved . . .” She paused, catching sight of the Glaswegian and frowning. He flashed a gold tooth in a vicious grin.

“Stick to the speed limits on our roads,” Hamish warned the two men, “and we can all stay friends. Enjoy touring Sutherland, gentlemen. Come along, Constable.”

They climbed into the Land Rover and Hamish started  the engine.

“The bald one. You looked at him a bit funny.”

“Never seen him before in my life.” Hamish sensed a hint of a lie. “He looked really mean and ugly. Scary. I didn’t like the way that he was talking to you.”

Was that it? Hamish thought to himself. Was that what I heard in her tone? Was she just a wee bit feared? Concerned for me? He shook his head to clear his mind.

“I can handle thugs like him,” Hamish said. “The American is different. Something odd about him. Get the license numbers of those cars and call them in to headquarters. Let’s find out who these two are.” 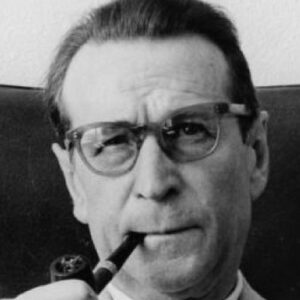 The Bleak, Propulsive Noir of Simenon's Romans Durs If forced to nominate any positives at all out of the last two years of global pandemic, it is the increased time I’ve...
© LitHub
Back to top