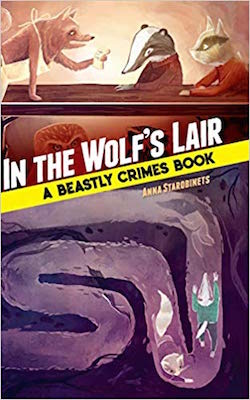 The following is an exclusive excerpt from In the Wolf's Lair, the first in Anna Starobinets's Beastly Crimes series for middle-grade readers. The Far Woods is a peaceful neighborhood, where all animals refrain from eating one another, and nearly-retired Police Chief Badger rarely sees any serious crimes. But one day, Rabbit is eaten. Suddenly, Wolf is framed, and Badger must find out who is making the woods a bloodthirsty place again, before danger strikes again.

“Everyone scram! This is a crime scene!” yelled Chief Badger. “You’ll trample the evidence! Beat it. Scoot. Skedaddle! Everyone, step back!”

The animals reluctantly took a few steps back, and Badger and Badgercat were finally able to make their way into the center of the clearing. A few bones, gnawed clean, some tufts of fur, and a bloodstain on the withered grass were all that was left of Rabbit. There hadn’t been such a brutal murder in the Far Woods in a long time. Chief Badger sniffed the air. The ripe, nutty smell of autumn filled his nostrils. He surveyed the surroundings. The tree tops were covered in reddish-gold leaves, as if the spotted hide of some magical creature had been thrown over them. The beauty was breathtaking! Meanwhile, animals were murdering each other. Badger suddenly felt tired—very tired. To heck with it all! Maybe he ought to go into hibernation right then and there. It wasn’t such a crazy idea. It was only natural, and winter was on its way. He’d go into hibernation and then straight into retirement and never have to come back. Let them kill one another and trample the evidence. He wouldn’t care. He’d be asleep…

“Chief! Is something wrong?” whispered Badgercat.

“But you were just standing there with your eyes closed, rocking from side to side,” Badgercat’s eyes suddenly flashed with alarm. “You weren’t about to go into hibernation, were you? We’ve got to arrest Wolf. Right? You don’t expect me to catch him all by myself. Do you?”

“No, no, I wasn’t going into hibernation. Just got lost in thought, that’s all,” said Badger warily. “And as for Wolf, we’ve got to determine if he’s guilty first. Don’t accuse animals willy-nilly, Son.”

“Obvious!” came a shout from the crowd.

“I understand your distress,” Badger spoke to the crowd. “Wolf will be punished to the full extent of the law—that is, if he is found guilty. And now Assistant Chief Badger of the Far Woods Police will rope off the scene of the crime and Vulture will proceed with the investigation.”

“Copy that,” said Badgercat, who reluctantly began hammering in small wooden stakes around the perimeter of the clearing. Vulture carefully examined the red stain on the grass, plucked at the tuft of fur with his beak, pecked at the bones, paced back and forth, and finally flew over to the edge of the clearing.

“Rabbit had gone out for a walk,” began Vulture, “when suddenly…”

“Please call him ‘the victim.’”

“If you say so.” Vulture was taken aback but didn’t let on. “The victim had gone out for a walk. Like so…”

Vulture proudly strode from the edge of the clearing to its center. “And then he was attacked by Wolf…”

“Victim. Assailant. That’s how we’ll refer to them.”

“These tracks lead away from the center of the clearing, in the direction of the thicket. And these tracks belong to—and you’ll have to excuse me here, but I can’t find an alternate word for this—a wolf. The tracks of the assailant are wolf tracks.”

“As you wish,” said Vulture, growing more annoyed. “The ferocious assailant ravenously plunged his teeth into the helpless victim, like this…” Vulture chomped down menacingly with his beak. “He was slain right here.” Vulture began tracing Rabbit’s outline on the ground with his talon, beginning with the long ears. “Traces of the victim’s blood indicate that he was eaten. Actually, if I may say so myself, devoured. The assailant committed the act quickly, showing no mercy. Time of death was around 9:00 p.m.—more specifically between the hours of 8:30 p.m. and 9:30 p.m. The assailant then fled the scene of this heinous crime. Here are his tracks. Take a look.” Vulture triumphantly spread his wings. “These tracks lead away from the center of the clearing, in the direction of the thicket. And these tracks belong to—and you’ll have to excuse me here, but I can’t find an alternate word for this—a wolf. The tracks of the assailant are wolf tracks.”

“Thank you, Vulture,” said Chief Badger, nodding. “Yes, these are wolf tracks. I can see so myself. However, there are lots of other animal tracks here as well. The whole scene has been badly trampled. How can you tell that these tracks in particular belong to the assailant?”

“Well…it’s obvious,” protested Vulture. “Or would you like to accuse one of us of the murder?”

“I don’t wish to accuse anyone,” sighed Badger, scanning the residents of the Far Woods. “But while the investigation is ongoing, everyone is a suspect.”

“Mrs. Rabbit,” whispered Badgercat, horrified. “What a shock this must be for her. And they’ve got children if I’m not mistaken.”

“They had a litter of ten this summer,” said Badger. “And before that, a litter of fifteen last spring. But they’ve grown up a bit by now.” He took a step toward Mrs. Rabbit. “We are all very sorry for your loss.”

“No one knows how hard this is for me,” she said, staring at Rabbit’s outline on the ground. Her body— covered in white fur with a downy gray underside— was shaking. “Show me my Rabbit. I’m ready to…to… to identify the body.”

“Unfortunately, there isn’t much to identify,” said Badger. “There is this tuft of gray fur. Do you recognize it?”

“Yes,” said Mrs. Rabbit quietly, her shaking increasing. “This is the fur of my husband.”

“Don’t say another word” came a voice from up above. “Not another word without our supervision!” Two owls nose-dived down into the clearing. Chief Badger recognized them. They were the two lawyer owls from the pub.

“We’re lawyer owls,” they said to Mrs. Rabbit. “Our condolences for your loss. We will defend you.”

“Defend her?” said Badger in disbelief. “But no one is accusing her of anything!”

“There will always be someone ready to accuse a poor widowed mother,” said one owl. “Especially one who has lost her breadwinner,” added the other.

“Open up, Wolf!” Badgercat struck the giant boulder blocking the entrance to Wolf’s den first with his front paw and then with his back paw. “It’s the police.”

“We’ll use force to come in if we have to,” said Badger calmly. “Resisting the police will only make things worse. We’re here to question you.”

“Again?” Wolf jerked the boulder aside and poked his muzzle out of the opening. “Sarge, aren’t you tired of accusing me? Why am I always first on your list? Huh? Theft—Wolf did it! Bite marks—Wolf! What’d I do this time, eh?”

“What’s that I smell coming from your mouth?” sniffed Badgercat.

He ripped a huge clump of graying fur from his chest and threw it on the ground. “I didn’t eat Rabbit.”

“How do you know who the victim was?” said Badger, squinting probingly. “And who said that he was eaten?”

“He said it! That catlike…” Wolf pointed at Badgercat with his claw. He spat something black and shiny onto the floor and added, “Freak.”

“I am Assistant Chief Badger of the Far Woods Police! For insulting an officer you will get an additional three days added to your life sentence!”

“Life sentence? But why, Sarge?”

“My colleague merely asked what the smell coming from your mouth was. Perhaps it was that of rabbit meat,” clarified Badger. “The rest came straight from you. You’re obviously aware that Rabbit was killed and eaten last night.”

“The whole woods knows that! But what makes you think I did it?”

“What did you eat for dinner last night?” asked Badgercat in an icy tone, entering Wolf’s den.

“Porcini mushrooms,” snarled Wolf, watching Badgercat and then Badger pass by him into the den.

“But you’re a predator,” said Badgercat, scanning the den for any evidence. “And predators need meat. Rabbit meat, for instance. Isn’t that so?”

“You’re full of it and you know it, Kitty!” Wolf bared his teeth. “It’s illegal for predators to hunt for meat in the Far Woods.”

“To prey on its residents,” said Badger. “Huh?” “It’s illegal to prey on the residents of the Far Woods, not ‘to hunt for meat.’”

“What’s the difference, Sarge?” Wolf popped something into his mouth and began chomping loudly. “What matters is that I follow the law.” He spat on the floor. “I eat mostly mushrooms. If you fry them up nicely, they’re practically the same as steak. You want proof? There’s some left over from last night in that pan over there.”

“Yes, these are mushrooms,” confirmed Badger. “But this doesn’t prove that you didn’t eat Rabbit. The mushrooms could have been a side dish.”

“I didn’t eat Rabbit,” Wolf repeated stubbornly. He made another crunching sound and spat on the floor.

“What are you munching on?” asked Badgercat suspiciously.

“Beetles. I’ve heard they have got more protein than deer meat. Plus, they help calm my nerves.”

“What do you think? You’re in my den, giving me the third degree. Wouldn’t you be nervous if you were being accused of murder?”

“If I wasn’t guilty of anything, I wouldn’t be nervous,” said Badgercat. “The police always carry out justice fairly.”

“Yeah right, I know how that goes,” growled Wolf.

“The police are fair and just,” affirmed Badger. “How about you tell us where you were last night around nine o’clock?”

“What were you doing?”

“Can someone confirm your alibi?”

“Confirm my…?” Wolf was confused. “Was anyone here in the den with you?”

“So you were all alone,” clarified Badgercat.

“So no one can confirm that during the time of Rabbit’s murder you were here, in your den, watching the root tube—and not murdering Rabbit in the clearing. So you don’t have an alibi.”

“I guess not,” Wolf scrunched up his nose, exposing his top teeth. “But I didn’t kill him.”

“What was on the tube?” asked Badger in an offhand manner. “Soccer, right?”

“It was the Far Woods Squirrels versus the Near Woods Weasels, right?”

“Why are you giving him hints?” whispered Badgercat loudly. Badger ignored his partner and continued to chat with Wolf about sports.

“Who won? It was our Squirrels, wasn’t it?” said Badger, smiling.

“Of course,” nodded Wolf, smiling in agreement. “Our Squirrels!”

“Far Woods Squirrels are the champions!” Badger pumped his fist in the air in celebration.

“What are you so excited about?” Badger stopped smiling abruptly.

“Yes, our Squirrels are the champions, but you… you’re lying.”

“What I mean is there wasn’t any soccer on the root tube last night,” said Badger. “In fact, nothing was on. All the root tubes were down last night. Because of all the rain we’ve been having, there was a glitch in the roots of the main oak. Which means you weren’t watching the root tube last night at nine o’clock. You were in the clearing at the scene of the crime. Vulture found your tracks. And Mrs. Rabbit said you strongly disliked Rabbit and had threatened to get even with him on multiple occasions.”

“Lone Wolf,” interrupted Badgercat, “you are under arrest for the suspected murder of Rabbit. Everything that you howl can and will be used against you. Paws behind your back.” In one swift jump, Badgercat had materialized behind Wolf and handcuffed him. 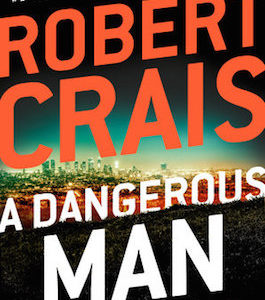 A Dangerous Man Isabel Ten fifty-three. Isabel helped her last customer, logged out of her terminal, and closed her station. She wasn’t...
© LitHub
Back to top