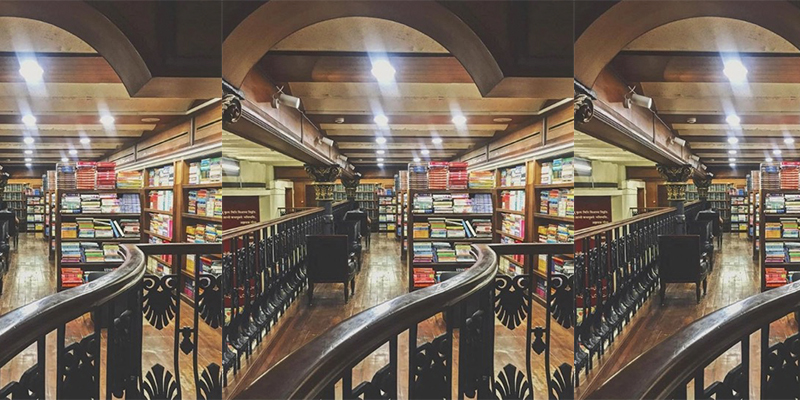 The door to Kitab Khana (“House of Books”), one of Mumbai’s leading English language bookstores, is tucked away behind a line of sidewalk stalls beneath a bustling Victorian arcade in the downtown area of the city. Right outside, vendors sell everything from pens and t-shirts to sex toys, but once you navigate your way through the crowds of shoppers and office-goers, and step into the air-conditioned quiet, you find yourself surrounded by marble floors, high ceilings supported by pillars, a mezzanine balcony and books displayed on tables and shelves. Other than its architecture, Kitab Khana isn’t unlike an independent bookstore in the US. There’s a children’s section at the back with space to sit and read, and a coffee shop. In contrast to other English-language bookshops in the in the city however, Kitab Khana carries a wide selection of books in Hindi, Gujrati and Marathi on the mezzanine floor.

The front tables feature current titles. When I visited, the books most prominently displayed were ones with a focus on Indian history and culture, along with international bestsellers. The first offerings that met my eye were The Patient Assassin—”A True Tale of Massacre, Revenge and the Raj” by Anita Anand; Emergency Chronicles, “Indira Gandhi and Democracy’s Turning Point” by Gyan Prakash; Michelle Obama’s Becoming; Homo Deus; Ann Beattie’s The New Yorker Stories; and Telling Times, a collection of Nadine Gordimer’s writing.

Browsing in bookstores is one of my favorite travel activities. Bookstores all over the world exude the same calm, hushed, atmosphere; the same soothing smell of paper and binding; the same handful of books by the big stars on the international bestsellers circuit. But it’s the differences in selection and organization that makes visiting bookstores abroad so rewarding. I find it both fascinating and humbling to see what people in different countries are reading and writing about, what’s on their minds, and what kinds of titles booksellers in other countries think will appeal to their reading public. There’s also the possibility of discovering something new and completely unexpected—an unusual art book, for example, or a writer or subject that might never be published in the US. It’s a gentle reminder that while the tastes and preferences of the American market can feel universal (at least to me, when I’m in New York), there’s a whole world of topics and approaches to writing and publishing that I know nothing about.

Kitab Khana has a high staff to customer ratio compared to other independent bookstores that I’ve been in. There must have been at least four or five salespeople, all men, the morning I went in. When I asked for the crime section, a helpful staffer informed me that there was no separate section for crime but that the crime novels were mixed in with the general fiction titles. When I asked how come, he said it was due to a lack of space—but the store didn’t appear to be bursting at the seams. My guess was that it wasn’t so much an issue of space as that the lines between different genres aren’t as tightly drawn in India as they are in the US. I grew up in Mumbai reading Agatha Christie, Frederick Forsyth and Dick Francis alongside Gabriel Garcia Marquez and Jane Austen—and didn’t think twice about the mix. It was only much later, when I started to write crime fiction and was looking to publish that I realized that in the US, crime fiction, like other genre fiction, is marketed separately and physically placed on separate bookstore shelves.

Article continues after advertisement
The lines between different genres aren’t as tightly drawn in India as they are in the US. I grew up in Mumbai reading Agatha Christie, Frederick Forsyth and Dick Francis alongside Gabriel Garcia Marquez and Jane Austen—and didn’t think twice about the mix.

At Kitab Khana, it was refreshing to find Jonathan Franzen beside John Grisham; and Jay Asher’s 13 Reasons Why, Isaac Asimov and Isabel Allende on the shelf above David Baldacci, Dan Brown, Steve Berry and Ann Cleeves. Elsewhere, I spotted A.J. Finn’s Woman in the Window, and titles by Elizabeth George and Janet Evanovich.

The store also carries locally themed crime novels, some of which were originally published in the US or UK. One of these was The Widows of Malabar Hill (published in India as A Murder on Malabar Hill) by this year’s Edgar-winner, Sujata Massey. Malabar Hill takes place in Mumbai (then Bombay) during British rule and features a female lead, the attorney Perveen Mistry. Murder at the Grand Raj Palace, the fourth installment in the Baby Ganesh Agency investigation series by UK born Vaseem Khan, features Inspector Chopra and takes place in contemporary Mumbai. There was also Sacred Games by Vikram Chandra (now a Netflix series) and novels that appear to be published only in India, like The Heist Artist by Vish Dhamija or Murder in Mahim by Jerry Pinto. (Unlike the coffee table, art books and hardcover fiction that I saw, the cover designs of the local paperback crime fiction titles veered towards a more pulpy, generic aesthetic.)

Afterwards, the manager at Kitab Khana told me that while they carried a fair amount of crime fiction, the store’s top-selling categories are children’s books, followed by general non-fiction titles, and then coffee table books on art and architecture. When I asked, he said that the bestselling crime fiction writers at the store are Daniel Silva, Ian Rankin, Jo Nesbo, Henning Mankell, Stieg Larsson, and Harlan Coben.

The onetime journalist, S. Hussain Zaidi, seems to dominate the Indian true crime scene, and Kitab Khana carries several of his titles, including Dawood’s Mentor, about the coming of age of the legendary Mumbai mobster, Dawood Ibrahim; Eleventh Hour, an account of the 26/11 terrorist attacks in Mumbai; and Mafia Queens of Mumbai, stories of thirteen colorful and ruthless women criminals—drug runners, smugglers, prostitutes—who left their mark on Mumbai’s underworld. Among the women profiled in Mafia Queens Jenabai “Daruwalli” [Alcohol-lady] stands out. She was born into the slums, married at fourteen, gave birth to five children and abandoned by her husband only to become a successful bootlegger and mediator between rival gangs, while moonlighting as a police informant. Despite her financial success, Jenabai never moved out of her one-hundred and fifty-square foot one-room home, and dispensed advice and brokered peace deals sitting cross-legged on her bed. Her daughter describes Jenabai as “powerful, fearless and abusive,” and admitted that although her mother tried to persuade her to enter the family business, she lacked Jenabai’s “charisma and shrewdness…when it came to dealing with the police.”

While the trip to Kitab Khana introduced me to Mafia Queens and Zaidi’s work, visits to other bookstores in different parts of the world have also been eye-opening. It was at a Catalan bookstore that I came across a children’s biography of Margaret Thatcher, and another on Agatha Christie. (The Christie book is now available in English in the US as a part of the excellent Little People, Big Dreams series.) And it was at a different Mumbai bookstore, the chain Crosswords, some years ago, that I chanced upon an anthology of Tamil Pulp Fiction (“Mad Scientists! Desperate Housewives! Murderous Robots! Scandalous Starlets!”) that had been translated into English. The stories were wonderful—they were both recognizable as pulp fiction but had a uniquely Indian sensibility. The cover art was also eye-catching: it showed a busty young woman dressed in a saree with flowers in her hair and bookish glasses, holding a pistol. The publisher, Blaft, an independent publishing house based in the city of Chennai in southern India, publishes crime fiction from India and Pakistan, as well as other eclectic titles in translation.

The Indian subcontinent has a long history of crime fiction, from the Feluda detective stories of filmmaker Satyajit Ray to the novels of Ibne Safi. Safi’s wildly popular Urdu language series Jasusi Duniya [Spy World] was published between 1952 and 1979 and consists of 125 titles including The Laughing Corpse and Doctor Dread, which are now available in translation in the US through Blaft and Small Press Distribution. The recent spate of thrillers, detective novels and true crime by Indian authors, published by Indian presses and set in India with Indian protagonists carries on and diversifies that tradition. 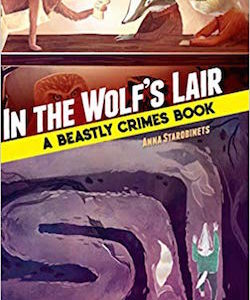 “Everyone scram! This is a crime scene!” yelled Chief Badger. “You’ll trample the evidence! Beat it. Scoot. Skedaddle!...
© LitHub
Back to top