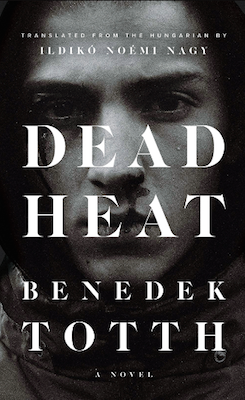 The following is an exclusive excerpt from Dead Heat, by Benedek Totth and translated by Ildikó Noémi Nagy. In a small town in Hungary, a group of bored teenagers—friends from the swim team—engage in reckless, wild behavior. They are bound together because their parents don’t care about them and their coach cruelly abuses them, but once night when they care caught up in a deadly accident, they start to turn on each other.

The car’s slid into a ditch, its nose facing some big-ass farm. The engine’s stopped. Smoke and fog swirl in front of the Matrix LED headlights. Ducky’s still stomping the brakes. I turn around. The red glow of the brake lights outlines a dark mound and the double skid marks. The only sound is the crackle of the cooling engine. Otherwise, you could hear a pin drop. I get out. The air is chilly even though it wasn’t cold when we left. I feel dizzy. I lean on the car for a second, and then I walk over to the body lying in the middle of the road. I crouch down. The guy’s on his stomach, wearing a thick wool coat, and I’m trying to figure out why anyone would wear this thing in such weather. I don’t really do much for a while, I just stare, but then as I turn him onto his side, he starts to moan. He’s stubbly and sixtyish. Or fortyish. He stinks of booze. He’s got a deep gash on his forehead and his face is covered in blood. There’s a black hole where his nose used to be, gushing blood at an angle so that it trickles right into his mouth. His eyelids tremble as he tries to open them, but all the blood pastes his eyelashes together. A bubble of spit forms on his lips and pops. He’s still breathing. I’ve never seen a corpse before, and what’s scaring me isn’t that soon I probably will, but that all this, with the blood and the red shine of the brake lights, seems kinda pretty in a way. I hear shuffling behind me. Ducky clambers out of the car and slams the door. He walks over to the front of the car, crouches down, and scowls as he examines the bumper and pats the radiator grille. His face is pale. The headlights cast radiance on his curly hair, as if he had a halo. He stands but doesn’t move. The headlights have blinded him. He rubs his eyes, then heads towards me, squinting.

“Let’s get the hell outta here.”

“We should call for help.”

“Not for the car, you dumbass.”

“Why the fuck would you wanna call for help?”

“Shit, man, did you really bash your head that hard?” Ducky gurgles.

“Then why the fuck would you wanna call an ambulance for a wild boar, huh?”

Ducky steps closer, looks at grampa, and prods him with his foot, prompting him to wheeze. Ducky recoils and starts screaming. I never thought he could make such a high-pitched sound.

“Is your fucking record broken, man?” Ducky bellows. “Chill the fuck out!”

“Why don’t you call one?” Ducky says, waving his phone around.

Ducky stares at me. He understands he has no other choice.

“Drag him off the road in the meantime,” he adds after a beat, and pokes grampa’s crushed head with the tip of his shoe.

“Fine, goddamnit, I’ll call your piece of shit ambulance,” Ducky grumbles, and I just stand there, staring at him. “Drag him off the road in the meantime,” he adds after a beat, and pokes grampa’s crushed head with the tip of his shoe.

“I can’t do it alone. He’s too heavy,” I say, and suddenly I feel exhausted. It’s quiet as fuck out here in the middle of nowhere. No grunt from any wild boar. There’s nothing. Not even a fucking owl hooting.

Ducky walks back to the car and gets in, and I’m thinking, what if all this isn’t really happening to us? That we’re actually someplace else right now? But I try to convince myself there’s no point, ’cause I damn well know that we’re not getting off that easy. A couple of seconds later Buoy and Zoli-boy get out of the car. Zoli-boy grabs his crotch and Buoy massages his forehead. They come over. Gravel crunches under their feet. They stop next to me.

“What’s this?” Zoli-boy asks, suspecting something’s not right, but by the time I can answer, Buoy starts explaining.

“My brother does a lot of hunting,” he says. “He told me that during mating season, older boars sometimes lose it and go charging at cars.”

Buoy gets a little pissed that Zoli-boy interrupted his story, but then he gets that something’s off, and takes a closer look at the dark, bulging mound on the pavement.

“Didn’t we hit a boar?” he says, rubbing his forehead.

“What the fuck’s he doing in the middle of the road at this hour?” he says, starting to get panicky.

“Don’t ask stupid fucking questions,” Buoy snaps, starting to get aggro too, even though he’s way better at handling stress than Zoli-boy.

“Get off my back,” Zoli-boy growls.

“Let’s pull him off the road,” I interrupt.

“What do you want to do?” Zoli-boy asks, alarmed.

Zoli-boy stands there looking scared as shit. He stares at the old man. I wait a bit, then try to jolt him back to his senses.

“What about his hand?”

“We’ll pull him off the road.” Zoli-boy stares at me blankly. “He can’t crawl away on his own,” I say, but he still doesn’t get it. An immense calm fills me. I am The Zen Master. “If we don’t move him, he’s gonna end up a pancake,” I explain.

“If we leave him on the road he will for sure,” I say.

“Okay, okay, I got it now,” Zoli-boy splutters.

“Why do I have to hold his legs?” asks Buoy.

“What if he’s got athlete’s foot?”

“You grab them, if you’re so into it!” Buoy steps back and pockets his hands, sour.

I switch places. I grab the old man’s legs and Zoli-boy holds his two hands. As we lift him, the guy moans and Zoli-boy freaks out and lets go. Grampa slams face-first into the concrete. Something goes crack, his cheekbones I guess, ’cause his nose is gone already, and his throat rattles.

Buoy is doubled-over laughing. He takes his phone out.

“Say cheese!” he calls, and we look up at him. The camera flashes.

“Are you out of your fucking mind?!” I yell, and let go of the old man’s legs, going straight for the phone in Buoy’s hand.

“Hey, chill dude!” Buoy says, seeing that I’m dead serious about taking his phone. He lifts it above his head and steps back.

“Then delete the picture.”

Buoy thinks about it, then starts tapping the screen hella salty.

“Fine, asshole, I deleted it.”

“I can’t fucking believe this.”

“Show me,” I say again, but then, as Buoy extends the phone towards me, I snatch it from his hand and start running toward the fields. As I move further away from the road and the car, it gets darker. I trip on the field’s ridges and furrows. Buoy’s behind me, but I know he can’t catch me. After about thirty metres, I stop with my back to the road. I hide the glow of the phone screen under my jacket, so Buoy won’t see me, and start looking through his folders.

I’m scrolling through Buoy’s phone but it’s hopeless. I can’t find that fucking picture for the life of me. All I flip through is a whole collection of naked chicks the asshole secretly took in the girls’ locker room, so I just go ahead and delete the whole folder. The bastard deserves it anyway.

When I finish, I look up, but I can’t see a thing. I’m seeing spots from the fucking phone screen. After I’m finally able to roughly pinpoint where the road is, based on sound, I head back.

Zoli-boy hasn’t moved from the grampa’s side. But Buoy’s still wandering around in the field, so Zoli-boy and I lug the old man into the ditch. Zoli-boy’s eyes are big and round as he yanks at the guy’s arm, and I keep thinking that Buoy wasn’t so full of shit about that athlete’s foot after all ’cause the stench that’s rising from the old man’s boots is something fierce. Ducky gets out of the car and heads towards us.

“What’s the number of the ambulance?” he asks when he gets back.

That means he’s within earshot. Better watch our backs. Ducky quickly taps in the number and holds the phone to his ear. He’s quiet for a while, then he takes the phone away from his ear and stares at the screen.

“It’s a phone-sex hotline, you dick!” he shouts toward Buoy.

“One-oh-seven,” I say. That’s the cops’ number and I mean it as a joke, because I seriously doubt someone could be that dense, but Ducky’s already tapping in the number, then turns around without a word and starts back towards the car. In the meantime, he’s mumbling something into the phone, but I can’t hear it. As he opens the door, the interior lights go on. Niki’s fixing her make-up in the rear-view mirror. Ducky gets in. Meanwhile, Buoy finds his way back to the road and demands his phone. I hand it to him. He’s happy to see that there’s not a scratch on it. He’s gonna be pleased as fuck though when he notices that I deleted all his voyeur shots.

Ducky gets out of the car again and starts towards us.

“I know, you idiot,” Ducky says. “Why’d ya think I called an ambulance? Now let’s get the fuck out of here.”

“Did you delete the pictures?” Buoy asks. He can’t believe his eyes.

A wise man is a silent man.

The Secret Life of Plants as Murder Weapons 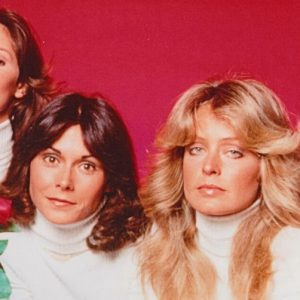 The Strange Cultural Legacy of Charlie's Angels When the television show Charlie’s Angels debuted on ABC in 1976, at the height of the second wave feminism movement, it presented...
© LitHub
Back to top