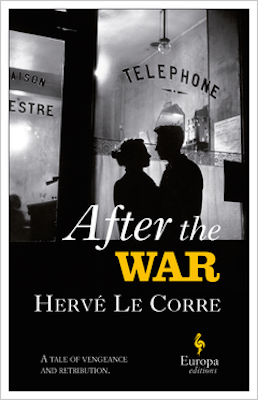 The following is an exclusive excerpt from After the War, the newly translated novel by Hervé Le Corre. Taking place in Bordeaux in the 1950, when France became embroiled in the Algerian War before the scars from WWII were able to heal, Albert Darlac, an unscrupulous, fascist police chief, and former Nazi collaborator, has retained power he does not deserve, running a corrupt police force. Twenty-year-old Daniel has been shattered by years of tragedy, loss, and despair. And he knows that Darlac should not be free to destroy more lives.

The street lies somewhere behind the station, pockmarked with large cobblestones and cut across in many places by train tracks where diesel locomotives sometimes rumble through, towing freight wagons. No-one around. In the distance, the sounds of metal creaking, a dog barking. They shove their prisoner into the back of the car. He is crying.

They drive, Albert at the wheel, Francis next to him. On the back seat, the fat man and the man they tortured. No-one speaks. Someone called the fat man Jeff, a little earlier, when they were starting the car. They talked to the other man but never used his name. They tied his hands behind his back before making him sit down. They never gave him time to get dressed, so now, wearing only underwear on the imitation leather car seats, he is shivering and sniffing and his teeth are chattering. His name? It will probably appear, a few days from now, in the local news section—or maybe even on the front page—of the Sud-Ouest newspaper, after his body has been discovered and identified.

On the other hand, it is important to understand why Albert insisted on driving: the car, an almost new 403, belongs to the judicial police department, of which he is the head. Commissaire Albert Darlac.

They slow down in a dark street on the north side of the city, in a district full of factories and workers, trapped between the marshland with its flooded paths and the muddy river that flows northward. Riverside poverty. They turn on to a concrete track that leads to the submarine base near the docks, left behind by the Germans. You can sense its gigantic mass absorbing the night and condensing it into impenetrable darkness.

They stop on a rutted part of the track next to a wasteland invaded by thistles and brambles. Francis and the fat man open the car’s back doors and drag out their victim, who falls to his knees in a puddle of water. Francis picks him up like a rag doll, standing him back on his feetand cutting the rope that binds his wrists. Then he pushes him in front of the car, where he’s illuminated by the headlights.

The man trembles and moans. He doesn’t move. He stares at them uncomprehendingly, trying to read the truth in their faces but seeing there, probably, only the night. He hugs himself tight in this frozen darkness, then begins to walk cautiously—because he’s barefoot—along a path that can just be made out amid the scrubland.

When the gunshot rings out, Darlac and Francis flinch slightly because the noise rebounds from the concrete walls of the monstrous blockhouse, amplifying the detonation and seeming to spread its echo all across the city.

Jeff, the fat man, takes a Luger pistol from the inside pocket of his pea coat, silently loads the breech, then moves forward and aims at the back of the man, who is panting and groaning a little further up the path, as his feet are hurt by the thorns and other junk that litter this squalid wasteland. When the gunshot rings out, Darlac and Francis flinch slightly because the noise rebounds from the concrete walls of the monstrous blockhouse, amplifying the detonation and seeming to spread its echo all across the city.

The man is thrown forward by the impact and he trips, one knee to the ground, and yells out in pain, then stands up again and tries to run. He goes two or three meters, shrieking, and his figure is about to disappear into the darkness, beyond the headlight beams, when the fat man fires again and they see a pale shape fall and then the dried-out vegetation moving, collapsing, where he crawls perhaps, or fights against what is killing him. They hear the rattle of his breath, muffled groans, the sounds of leaves rustling, dead branches snapping.

Jeff walks over to him, holding his gun down at his side. His massive body waddles.

“What the hell are you doing?” Darlac asks.

“Nothing,” Jeff replies, without turning around.

He fires three more shots and looks at what lies at his feet, which the other two cannot see.

Albert Darlac starts the car and puts it into reverse. Francis gets in just before it begins to move. They watch Jeff running towards them in the headlight beams. He’s heavy but so quick, so agile as he opens the door on the fly, yelling angrily.

Darlac does not respond. He manoeuvres the car onto the cobblestones of the street.

Behind him, the fat man wheezes, coughs, mutters. “He had to die, didn’t he? So what’s the problem?”

“Couldn’t miss your chance, could you? Gets you hard, does it? You’re a fucking lunatic! You like that, do you, a nice bit of red meat?”

Half turned to the back of the car, Darlac bellows at the fat man as the car rattles over the cobblestones. His gloved hands gripping the steering wheel tightly, he shakes it as if he means to yank it free. Francis, shrinking imperceptibly into his seat, looks through the windows at the empty boulevards moving past in the dimly lit night. Suddenly there is silence inside the car. The only sound is Jeff breathing through his nose like a sulky child, trying to contain his rage.

“You didn’t ought to talk to me like that,” he says at last in a quiet voice, as they drive past the wall of the Chartreuse cemetery.

“‘I didn’t ought to?’ I’ll talk to you how I want. You obey, and that’s it. We kill this piece of shit, and that’s how it goes. One bullet, nice clean job, leave him to rot, end of story. So calm the fuck down, or I’ll send you back where you came from!”

The fat man says nothing. He looks down, his hands touching.

“A hard bastard, am I? We’re doing this to make sure that Destang jerk doesn’t declare war and set fire to the whole fucking­ city. And this asshole goes and does that? He was out of line, and you know it. He’s not following the rules anymore.”

Leaning against the door, Francis sniggers.

“Oh, there are rules, are there? First I’ve heard of it. The only fucking rule I know is the law of the jungle—you don’t mess with the lion. And right now, the lion is us.”


After the WarEuropaHervé Le Corre 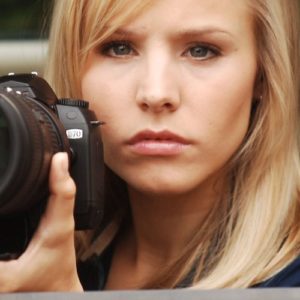 Five Series to Read if You’re Still Upset About How Veronica Mars: Season 4 Ended SPOILER ALERT: Major spoilers for the fourth season of Veronica Mars. Do not read on if you haven’t watched the season,...
© LitHub
Back to top