If you’re a Marshmallow (and I consider myself a newly minted one), 2019 has been a rollercoaster of a year. It saw the long-anticipated reboot of the tv show Veronica Mars—something in which fans had been so invested, they launched a Kickstarter that funded the 2008 movie. And when season four of the long-benched show wrapped, series creator Rob Thomas announced that he was already kicking around ideas for a season five, hopefully to be shortly picked up by Hulu.

But that new season came with a price.

The internet was not particularly chill about the move. Fans launched a petition to return the character to the show that garnered thousands of signatures. Twitter nearly melted down in the furnace of Marshmallow fury and sadness.

In an interview with Oprah Magazine, Thomas justified the choice to explode Logan Echolls and murder the teenage yearnings of millions of viewers (sorry, still not over it) by saying, “In most of noir, that possibility for romance or sex exist [sic] in those stories, and it’s tough to have that exist if there is a husband at home. So that’s why that very difficult choice was made.”

Thomas isn’t wrong—noir, and fictional private investigators in particular, have a long and storied history of singledom. Phillip Marlowe was famously single, vacillating between seeing in every woman either a femme fatale, the beautiful dame leading a man to his ruin, or something even more deadly: the Anne Riordans of the world, the nice girls who might actually represent a chance at domestic felicity and true partnership. It’s only in aggregate that the greater of the two dangers becomes clear: In all of the Chandler-penned Marlowe books, Marlowe has precisely one sexual relationship with a woman—not exactly an advertisement for the joy of matrimony or partnership.

And Marlowe’s not alone: singledom itself is often baked into that hardboiled crunch of noir. (For instance: You couldn’t easily write an article roundup about private investigators, male or female, with dysfunctional personal lives without some serious qualifiers. The internet only has so much bandwidth.) After all, it’s not tonally easy to maintain a tone of pessimism and cynicism if you’re also going home to the love of your life and things are going smoothly.

Just because a noir character is single, however, doesn’t mean they’re alone—or particularly unhappy. Sara Paretsky, whose iconic V.I. Warshawski is not hemmed in by any traditional bond of matrimony but rather draws strength from a larger community, has acknowledged that there is a different creative potential when writing female private investigators. In an interview with the Chicago Reader, she made the point that:

“The private eye is traditionally a loner…They come out of the tradition of the western, with the cowboy who’s coming in to clean out the town and restore justice with a capital ‘J.’ And I think that, on an unconscious level, women don’t think that way…I think women tend to exist more in what Carol Gilligan calls a “network of connection” than they do in isolation.”

If Thomas’ response to fans reactions are any indication, Logan Echolls Mars really is dead—and nothing can change that. And there’s certainly an argument to be made that moving Logan off the scene keeps the focus on Veronica Mars as a true noir heroine, in the vein of Phillip Marlowe—only time, and hopefully, another season of television, will tell.

Whether you’re in favor of Thomas’s drastic move as necessary to move the story of Veronica Mars forward, or you’re still truly, deeply, irrevocably heartbroken, one thing does immediately jump out as problematic. In Rolling Stone, Thomas also justified the choice by saying, “It’s just hard to imagine a detective show with a 35-year-old woman with a boyfriend.”

Defining a woman as interesting or watchable for her lack of relationship status is as reductive as requiring that she needs a love interest to be complete—it’s still a way of defining her vis-a-vis a partner. It shortchanges Veronica’s growth as a character, and it shortchanges the audience, for whom a happily married Veronica Mars is not inherently a less interesting character than a single one.

In that spirit, here are a few of the great fictional female detectives, sleuths, and private investigators whose powers of detection are not hobbled because of their domestic bliss. It’s no mistake that most of the female detectives, sleuths, and private eyes on this list were created by women themselves—”the network of connection” may not always equate to a spouse, but women in particular are well-versed in the creative possibilities of community. 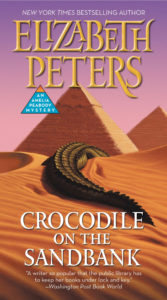 Over the course of 20 historical novels written by Egyptologist Barbara Mertz (writing under the pen name Elizabeth Peters), Amelia Peabody Emerson and her husband Radcliffe Emerson’s truly egalitarian marriage never gets in the way of solving mysteries. Amelia and Emerson fall in love over the course of the first Peabody mystery, Crocodile on the Sandbank, and maintain a strong partnership over the course of the series, becoming parents along the way.

Granted, this isn’t a strictly noir title—Peters’ novels are much more historical mysteries than noir in tone or structure—but Amelia Peabody is as sleuth-y as they come and her powers of detection are hampered not at all by the existence of either a husband or a full-fledged family. 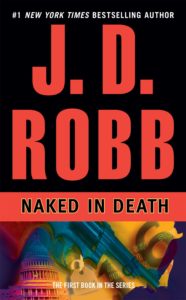 Maybe it should come as no surprise that Nora Roberts, one of the queens of romance, should excel at writing an engaging (and still steamy!) married couple. But Roberts, writing as J.D. Robb for the In Death novels, achieves exactly that with her partnership between lieutenant of the New York Police and Security Department homicide lieutenant Eve Dallas and Roarke, CEO of Roarke Industries, and one of the richest men in the world.

Over the course of some 50 (!) novels, Eve and Roarke remain devoted to each other, sacrificing no sexual tension for the fact that they’ve been married for what must surely be one of the longest marriages in crime novel history. 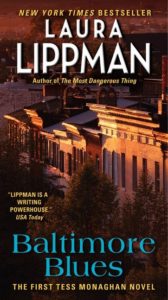 Laura Lippman’s Baltimore-based private investigator Tess Monaghan isn’t necessarily the picture of traditional domestic bliss, which makes her evolution into motherhood in the 11th Tess Monaghan novel, The Girl in the Green Raincoat, all the more interesting.

Lippman does something with Tess that might have been very satisfying to many a Marshmallow: take a human, flawed female character and evolve her relationships in a way that feels satisfying, unexpected, and very, very real. Nary a car bomb is necessary to keep Tess interesting for her readers. 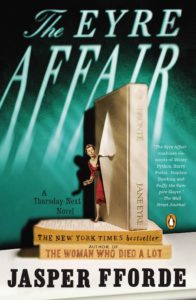 Everyone’s favorite Literary Detective, Thursday Next, bears many of the trademarks of the classic noir heroine/coupling, despite the fact that she exists in a parallel universe where she ensures that famous literary plots run as they should. Thursday’s got a tragic backstory, a star-crossed veteran ex-turned-husband, and an authoritarian government capable of commandeering police investigations at will. But by the end of the first Thursday book, The Eyre Affair by Jasper Fforde, Thursday is reunited with the ex and all seems to be well—at least until he’s eradicated from Thursday’s timeline for a bit in Lost in a Good Book.

Even though Fforde seems to recognize the narrative opportunity of sidelining a husband, Parke-Laine never totally vanishes from the narrative: he’s alive and well in Thursday’s memory, and eventually, back in the series proper. 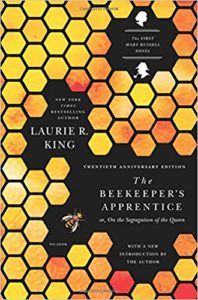 It’s almost cheating to include Laurie R. King’s Mary Russell series on the list since the premise, presumably, was: What if Sherlock Holmes had a wife with whom he solved crimes? But it would be a mistake to not point out that the character who is arguably the mystery genre’s most famous bachelor can find domestic bliss without sacrificing any intrigue over the course of fifteen novels. If it worked for Sherlock Holmes, why not Veronica Mars? 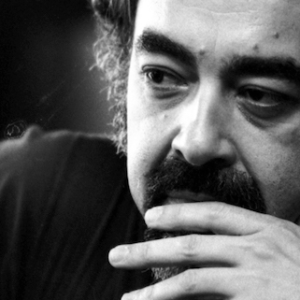 Joe Ford, car detective, searches for valuable stolen vehicles all over the world. Stayton Bonner reports on Ford's...
© LitHub
Back to top