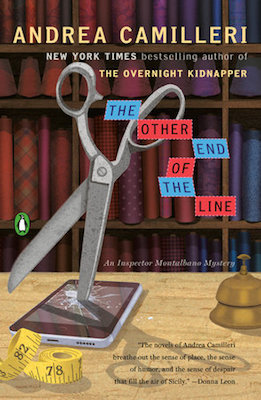 The following is an exclusive excerpt from The Other End of the Line, the new novel by Andrea Camilleri. When refugees come to Sicily, Inspector Montalbano and his squad are stationed at the coast to provide aid. But when a woman in the garment industry is murdered, Montalbano finds himself juggling many disparate responsibilities as they appear increasingly seamless.

“Yes,” said the inspector, starting to take his jacket off and unbuckling his trousers.

“What are you doing?” Livia asked.

“I should go and get him before the current carries him back out to the open sea. Go and get me my sandals and bathing suit.”

Livia rushed into the house, and when she returned she found Montalbano completely naked with the telephone receiver in his hand.

“Hello, Fazio? Listen, I’m about to recover a dead body from the sea right in front of my house. Inform the circus and try to get here as soon as possible yourself.”

He hung up, put on his bathing suit and sandals, and, the moment he reached the veranda, found himself face-to-face with the early-morning fisherman.

“Good morning, Inspector. Have you seen that there’s a dead—”

The two men turned the boat right side up and pushed it towards the wet sand, and then the first wave grabbed hold of it and pulled it into the water.

Montalbano and the fisherman hopped in. The man laid on oars and started rowing forcefully. Minutes later they were beside the floating corpse. The fisherman let go of the oars and went over beside the inspector, and together they got a good grip on the body and hoisted it onto the boat.

The inspector studied it.

The sea hadn’t yet had time to inflict any damage. The naked body was still intact. It was clear it hadn’t been in the water for very long. It belonged to a boy who looked barely fifteen years old. Death had rendered his facial features more childish.

Montalbano became suddenly aware that he was now in control of the “very delicate situation” that Bonetti-Alderighi had alluded to.

The fisherman, while steering the boat shoreward, said: “You know, Inspector, lately there’s been no point in going out to fish. You haul in more dead bodies than fish.”

They touched the shore. Montalbano hoisted the corpse onto his shoulders and brought it onto dry land.

Livia meanwhile had come running up with a bathrobe, which she handed to the inspector.

“Dry yourself off. It’s cold out,” she said, never once looking at the corpse.

Montalbano took the robe and, instead of drying himself off, covered the boy’s dead body with it.

From afar they began to hear the sirens of the approaching police cruisers.

Once he was dressed, to satisfy a whim, Montalbano phoned Hizzoner the C’mishner: “I just wanted to let you know the case of the dangerous terrorist has been solved. I found him dead in the water.”

“How can you be so sure that it’s the same person?”

“Dr. Pasquano has just reported to me that the victim died no more than five hours ago, at the very moment the patrol boat was outside the harbor. The boy must have fallen accidentally and nobody noticed. So I’d like authorization to suspend the search.”

Bonetti-Alderighi had a moment of hesitation.

“And you will take responsibility for this upon yourself?”

“It’s almost noon,” said Livia. “What are you going to do? Go to the office?”

“No,” said the inspector. “Let’s stay another half hour together, and then I’ll take you to the bus.”

He took Livia by the hand and led her into the kitchen.

“We need something hot to drink.”

He prepared another mug of coffee for himself and some tea for Livia. They drank in silence, then Livia finally went into the bedroom and grabbed her suitcase while Montalbano put on his jacket and closed the French door to the veranda.

They went out of the house.


Andrea CamilleriPenguinThe Other End of the Line 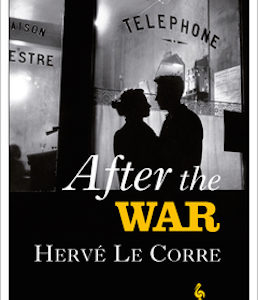 After the War The street lies somewhere behind the station, pockmarked with large cobblestones and cut across in many places by train tracks...
© LitHub
Back to top