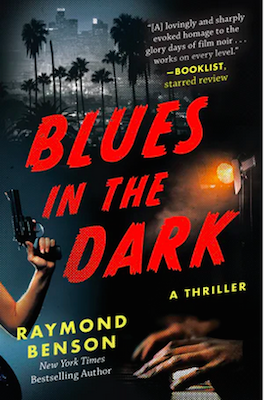 The following is an exclusive excerpt from Blues in the Dark, by Raymond Benson. A young film producer named Karissa Glover moves into an old LA mansion in an area of the city once populated by black celebrities. The former owner of Karissa’s house, a white actress named Blair Kendrick, died decades before. When Karissa tries to develop a modern noir film about Blair, mysterious forces seem to stop her, leading Karissa to begin to investigate who the star really was—and why she really died.

Karissa arrived at the house on Harvard Boulevard at dusk and pulled into the garage. It had been a productive day, but still a frustrating one. She and Marcello still didn’t seem any closer to resolving what direction they should take. Part of her wanted to drop the idea of doing a film about Blair Kendrick because it seemed so fraught with problems, not to mention the threats to her career and personal life. On the other hand, she was deter­mined to forge ahead and stand up to the bullies who thought they could dictate what her company could make or not. Some intangible force was pushing her toward uncovering Blair’s story and the truth about what had happened to her and Hank Marley.

She entered her home, put her purse on the kitchen counter, and walked through to the foyer. The mail had already been dropped on the floor through the slot. Still, she had gotten into the habit of peering out the door to check the front of the house. Opening the front door, she stepped onto the porch, and her eyes caught a splash of color over by the swing.

A vase containing a bouquet of flowers sat on the seat.

“What in the world?” she said aloud.

She walked to the swing and saw a little white envelope addressed to “Karissa” attached to the vase with tape. The flowers were peonies, carnations, and roses. Very pretty.

If this is from Willy, trying to get in good graces with me again . . .

Karissa took the envelope in hand and opened it. She removed the card and discovered that nothing was written on it. The front and inside were blank.

The bullet struck the front of the house before she heard the retort of the gunshot in the street.

The bullet struck the front of the house before she heard the retort of the gunshot in the street. It took a full second or two to realize what had just occurred. By then, another round thud­ded into the front door as she instinctively jumped backward and leaped to the floor of the stucco porch. The scream came next as she rolled.

Panicking, Karissa started to crawl to the door, but stopped when she saw that would break what cover she had. Instead, she slithered closer to the protection of the short wall that ran along the edge of the porch. Could a bullet go through the stucco? It wasn’t very thick.

She reached for her phone—but gasped when she remem­bered that she’d left her purse in the house. She was helpless.

The sound of a car revving its engine broke through her thoughts. Wheels screeched on the road and the automobile took off. Karissa raised her head above the wall and saw a black sedan speeding away. It had happened too quickly for her to get a good look at it.

Breathing heavily, she got back on her feet, gazed into the yard and street, and figured she was safe. Her heart was pound­ing in her chest like a drum. Her legs shook as she struggled to keep from collapsing.

Was it Barry Doon’s car? The BMW?

She couldn’t swear to it.

Karissa bolted for the front door and went inside, leaving the flowers on the porch. She ran back to the kitchen, found the phone in her purse, and dialed 911.

The police had come and taken her statement. A forensics team arrived a little later and pulled the two rounds out of the front of the house, bagging them as evidence. Now there were two ugly holes, one in the exterior wall and another in the door. The cops had also taken the vase of flowers and the card. Karissa assumed they’d check for fingerprints.

Curious neighbors had come out of their houses to investigate why police cars were congregated in front of the mansion. Nothing to see here, folks, move along . . . ! She was embarrassed and mortified that she would be the subject of gossip and mis­trust in the neighborhood. Whatever goodwill she had hoped to establish with her neighbors after moving in was now dashed.

A plainclothes officer who introduced himself as Detective Madison interviewed her after he arrived on the scene a couple of hours after the incident. He seemed weary and disinterested, as if a drive-by shooting was nothing new. Karissa told him her suspicions.

“Let me get this straight,” he said. “You think this was done by an executive at Ultimate Pictures in an attempt at stopping you from making a movie?”

“I know it sounds incredible, but, yeah, that’s what I think.”

“You sure about that?”

“No, I’m not sure at all. I didn’t see him. I just know that he’s verbally threatened me and my business partner, and we’ve caught him stalking us.”

“He said he was going to kill you?”

She shook her head. “No, he didn’t say that exactly. He just—”

“How did he threaten you?”

Karissa was tired and annoyed with the man’s line of question­ing. “It was more like intimidation. He told me not to continue my research.”

The man looked skeptical. “Uh huh.” He wrote something down and reread his notes. “These flowers that were delivered, you don’t know who sent them?”

“Like I told the other officers, I’m in the process of a divorce. My ex-husband is an actor, Willy Puma.”

“Well, we’ll see if he has an alibi. You have his contact information?”

She gave him Willy’s address and phone number. “Look, Detective, those flowers were placed on the swing so I would be forced to walk over and stand in a spot that made me a target. Whoever had the gun was waiting for me to do that.”

Duh. Karissa wanted to shake him.

The detective eyed the distance between the bullet holes and where she had been standing. “If you ask me, whoever it was is a lousy shot. Or he intentionally missed you.”

It was nearly eleven o’clock when Detective Madison finally gave her his card, gathered his things, and departed, saying, “If you have any more trouble, don’t hesitate to call.”

When she was alone in the house, Karissa texted Marcello and asked him to call her if he was still up. It seemed he wasn’t.

She was starving but was too exhausted and wired to do any­thing elaborate for a late dinner. Instead, she had a bowl of cereal and four glasses of wine.

When she was finished, Karissa sat in Blair Kendrick’s easy chair near the grand piano in the parlor. Photos of the movie star were all around. The actress in them stared at her, all smiles and bright eyes.

Halfway drunk, she asked aloud, “Is it worth my life to make a movie about you? Why should I? What happened to you and Hank Marley? What happened in that studio office when Eldon Hirsch was killed? Did you really have a baby? Who the fuck were you?”

Karissa wondered if the now-familiar ghosts lingering in the expansive ballroom of the old house would answer her questions, but the room around her remained silent. 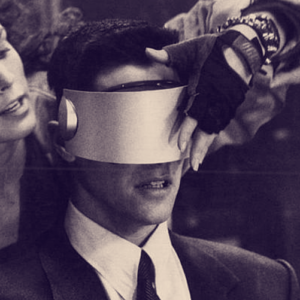 5 Classics of Cyberpunk Noir From its inception, cyberpunk has shared quite a bit of DNA with crime fiction. Your archetypical (some might say stereotypical)...
© LitHub
Back to top