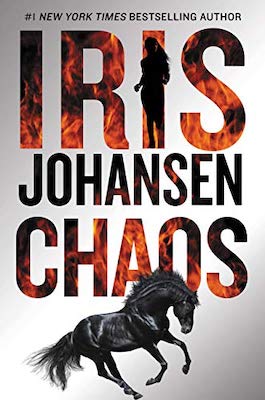 The following is an exclusive excerpt from Chaos, by Iris Johansen. CIA agent Alisa Flynn knows she's violating the rules when she breaks into billionaire Gabe Korgan's home, avoiding all the security measures and bumping into Korgan himself. She must convince him to help her rescue schoolgirls who are being kidnapped. He's her last hope, and time is running out.

Alisa could see Korgan sitting in the study at his desk drinking a cup of coffee as she paused near the bottom of the staircase. She braced herself and then went down the last three steps. “Have you been there all night?” she asked as she entered the study. “Even Zabron doesn’t know enough stories about me to keep you that entertained.”

“Actually, my conversation with Zabron was relatively short. I told you I would never trust a single source. But I did find him interesting, as I did all the other information I found about you.” He smiled. “But you flatter yourself if you believe I’d sit here all night poring over your résumé.”

“I think you  spent a good portion of it doing that.”  Her gaze  was narrowed on his face, trying to read him. Dammit, he was as ultra-complicated as one of his inventions. Yet she thought she could see something . . . “Be honest with me. I think honesty is going to be very important to both of us.”

His smile faded. “You’re absolutely right. I did my due diligence, but not all night. I took a two-hour nap, showered, and then came down here to wait and see when you’d break out of that bedroom.” He gestured to the thermal coffeepot on the desk. “I even ordered coffee for us. Would you like a cup?”

“Not right now,” she said absently. “I’d rather you talked to me. I’ve been waiting all night.”

“Not with you. You don’t give a damn about strategy. You just gather all the facts and then decide what you’re going to do with them. Besides, I think you’ve already made up your mind.”

“Perhaps. Providing I can receive reasonable assurance that I’ll get what I want from you.” He took a sip of coffee. “What took you so long to get down here if you were so anxious?”

“I was waiting for Vogel to come and get me. I didn’t want to strike a wrong note by breaking out of the room if the decision was still up in the air.” She added impatiently, “But he didn’t come, and I didn’t know if it was amusing you to rig some kind of test about the damn lock, so I thought, What the hell.”

He chuckled. “Indeed. What the hell?”

“Now stop talking about things that aren’t important. I’ve already given you all the assurances I can. What else can I do?”

“I’m about to tell you.” He leaned back in his chair. “You see, the entire problem is that I’m such a cynical bastard. I don’t trust you. It takes me a long time to have faith in anyone, and your breaking into my study wasn’t destined to inspire me to do it. You need to erase that mistake.”

“And how am I supposed to do that?”

“Proof of intent,” he said softly. “You keep talking about an exchange of services, but I’m obviously going to have to perform first to avoid having those students slaughtered. Correct?”

She nodded. “I knew you’d have to trust me.” She moistened her lips. “I thought you’d want some kind of bond to seal the deal. I told you I’d be willing to do anything.”

“So you did,” he said ironically. “I believe even Masenak’s head was mentioned at one point.”

She stiffened. “Is that what you want?”

“Not initially. You’ve told me that he couldn’t  be lured into a  trap by your people. And even if you could find his camp, he’s exceptionally well guarded. If you attacked him, he’d go into automatic, kill those students, and then go on the run himself. Which was exactly what I don’t want to happen.”

“I told you I’d track him down for you.”

“And so you will. My research affirmed that you weren’t lying about your tracking skills. Homeland Security gave you expert status after your training in the Arizona desert.”

“These days I’m even better than those reports say.”

He chuckled. “And so modest, too.”

“I don’t want you to change your mind,” she said. “You can’t do that, Korgan. I can’t let it happen. What was that you were saying about proof of intent?”

“I sat here for a long time last night thinking about what would make me trust that you’d keep your promise after I gave you what you wanted.”

She sat there, tense, staring at him.

He smiled. “Leo Baldwin. I’m sure you’ve heard of him.”

“Of course I have.” She frowned as she  tried  to  remember  every detail. “One of Masenak’s sergeants in his army. Murderer, rapist, scum of the earth.” She paused and then added slowly, “And Masenak’s lover.” Her eyes widened. “You want me to kill him?”

“No, I just want him captured. Though it would probably be  safer for you and those students to kill him. He’s as much a monster as Masenak and could be troublesome for me either way. But I’ve decided he might be useful to me, so I just want him to vanish in a manner that would not interfere with me removing those students you’re concerned about. Which would also mean that no one could think the CIA is involved.” He met her eyes. “Could you do it? You said your sources would have problems luring Masenak into a trap, but Baldwin is neither as smart nor as well protected. Possible?”

She thought about it. “Possible,” she said slowly. “Why do you want it done?”

“I’m not quite sure. I might have several reasons. Baldwin has been with Masenak a long time and has information I can use. Or maybe I want to catch Masenak off guard, and removing Baldwin will be the best way  to do it. Their intimacy would be a weapon in itself. I want Masenak wondering whether Baldwin has left him because he thinks he’s a lousy lover, or if he’s trying to sell him out to one of the wealthy parents or the CIA. Either way, if you do your job right and Baldwin just disappears into the mist, I’ll bet Masenak will be going on the hunt for him. Which might eventually let me spring a trap on Masenak after all.” He smiled mockingly. “It would be very complicated as well as dangerous. You’d have to want to keep that deal with me very much to risk it. I couldn’t ask for a better proof of intent.”

“No, you  couldn’t.” She was remembering that it had been Baldwin who had cut off the head of that schoolgirl. “If I take care of this, you’ll find a way to go get those students right away?”

He nodded. “Proof of intent.” His smile was twisted. “May my soul burn in hell.”

“Don’t be dramatic. A deal is a deal. I didn’t expect anything else. Of course I’ll do it.”

“How soon? You said you’d be able to locate Masenak’s camp in a couple of days. Baldwin will be at that camp. Two days?”

“More than likely.” She came forward and poured herself a cup of coffee. “Now that we’ve settled that, I’ll have that coffee. I need it. I should have expected you’d do something unusual to get your pound of flesh, but it wasn’t this. From what I heard, you were more cerebral than physical.” Now that she was committed, her mind was racing, trying to think how she could pull this off. “You’re right, it’s going to be complicated. How soon can we leave?”

He didn’t answer that question. “I’m very physical,” he said softly. “It’s just that most people pay more attention to the cerebral because they assume that’s where they can benefit the most. How physical are you, Alisa?”

She could feel the sudden tingle of sensuality in the room, the sheer eroticism he was emitting. It startled her to find her body responding to it. She had been so focused on his words and the opportunity he’d presented that she hadn’t been aware of the sexuality. Now she was very much aware, and it had to be confronted. “I have to be physical or I wouldn’t be able to do what you’ve asked me to do.” She stared him in the eye. “But if you’re talking about sex, say it. I don’t think you are, because it would get in your way. So tell me if it’s part of the deal. Is it another proof of intent?”

He was suddenly still. “And if it was?”

“I’d take my clothes off. I told you I couldn’t let you change  your mind.”

He was silent a moment. Then he smiled and shrugged. “You did, didn’t you? But you’re right, dealing in that particular proof of intent doesn’t appeal to me.” He grimaced. “Well, that’s not quite true. The appeal is there, but I’ve made the deal difficult enough for you. You asked how soon we could leave? Probably within the hour.

Excerpted from CHAOS by Iris Johansen. Copyright © 2020 by IJ Development. Reprinted with permission of Grand Central Publishing. All rights reserved. 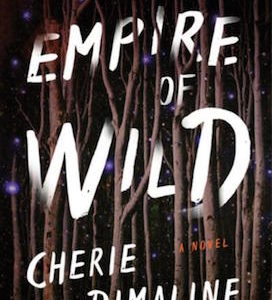 Empire of Wild Old medicine has a way of being remembered, of haunting the land where it was laid. People are forgetful. Medicine is not. The...
© LitHub
Back to top