Food is so much more than fuel for your characters—it can be the engine for your entire plot!

Long before I became a writer of foodie mysteries, I fell in love with reading them. It started with Diane Mott Davidson’s series about a Boulder-based caterer who couldn’t help solving mysteries on the side. Davidson didn’t merely dump descriptions of meal preparation onto the pages, food was woven into her story. As the reader, I wanted to be friends with caterer Goldy, sitting in her kitchen, tasting her food. When Goldy finally remarried—this time to a cop, many crimes were dissected in their kitchen as they cooked. Readers knew that Goldy’s husband Tom was a good guy, because he cooked incredible comfort food for her. And made amazing coffee.

Food can do more than provide fuel to a book’s characters. Like Davidson, other authors use food as the engine for their books, meaning the characters work with food so it’s always a part of the story. Barbara Ross’s Maine Clambake mysteries are a good example. Her main character, Julia Snowden, returned home to a small town in Maine to help save her family’s clambake business. Those books set in the summer season include scenes at the bake. Repeat readers know the menu by heart (fish chowder, lobster, steamers, corn on the cob, a roasted onion, baked potato, a boiled egg, and blueberry crumble), and know to expect a murder with a family-and-friends twist. Other writers are particularly good at using food to show connections between people and bring the surrounding community to life. Readers yearn to live in that town or befriend those characters. Krista Davis’s Domestic Diva series comes to mind. Sophie Winston lives in historic Old Town Alexandria, across the street from three sidekicks, her best friend, her childhood rival, and her beloved but ex, husband. Sophie isn’t in the food business, but she and her friends gather daily in her homey kitchen to produce and share amazing meals—and discuss clues and theories for the latest murder.

A kitchen, by the way, is the perfect setting for a murderous plot—it’s hot, fast, heavy work, involving people who are probably more accustomed to acting on their feelings than talking them out. And the kitchen is full of opportunities for slipping a little poison into someone’s soup, or pie. Or too much salt perhaps, to ruin an aspiring chef’s reputation and offer motive for murder? Plus, all those knives . . . Leslie Karst’s character, Sally Solari, has two restaurants in her life—her family’s homestyle Italian eatery and a fancy French restaurant she’s inherited. The chefs are often boiling over, family and murder make the work more intense. But always, the food in these books is divine. Deborah Crombie’s last release, A Bitter Feast, featured a high-strung and competitive chef, and a high stakes charity luncheon for important guests and critics. But the chef’s growing reputation drags the past into the present, with murderous results. Diana Abu-Jaber has written a little of everything, from straight fiction to memoir to mystery. Her references to food reveal so much about character, as illustrated by these lines from Crescent: Then she also read Sirine’s coffee grounds and said she could see the signs written in the black coffee traces along the milky porcelain: sharp knife, quick hands, white apron, and the sadness of a chef. “Chefs know—nothing lasts,” she told Sirine. “In the mouth, then gone.”

But you don’t have to include a chef in a book to show the ways that food can unveil details about people. What a character eats, cooks, or thinks about when describing another character tells a lot about who they are. Some writers use descriptions of food when they are not food writers at all—Ann Cleeves is an example. When a reader comes across lines like these from Raven Black, “Mr. Scott was a pale, thin man. A stick of forced rhubarb said Sally’s mother, who had seen him at a parents meeting” or “She tried to imagine Mr. Ross, sitting at their kitchen table while her mother hacked at the overcooked meat and picked away at him with her questions”, she knows she’s in the capable hands of a master.

Food and mysteries turn out to be a perfect pairing, and these days the reading possibilities are endless. If you’d like to check out more food and murder obsessed mystery writers, a baker’s dozen of them blog daily on Mystery Lovers Kitchen. To close, I’ll leave you with a few more of my favorite food-related quotes; I find and admire them everywhere . . .

“Her idea of fun was putting cake frosting on a bran muffin.” J. Ryan Stradal, The Lager Queen of Minnesota

“Now if you’ll excuse me, I’m going to go baste the turkey and hide the kitchen knives.” Mrs. Pascal, The House of Yes

“Amina opened her refrigerator. A collection of takeout boxes slumped together like old men in bad weather.” Mira Jacob, The Sleepwalker’s Guide to Dancing

“Sandy thought Anna still sounded angry. He had a picture in his head of a pan of soup standing on the Rayburn and ready to boil over.” Ann Cleeves, Red Bones

“Her knives were so sharp they severed the flash of an onion or a chicken as softly and cleanly as a wish.” Michelle Wildgen, Bread and Butter 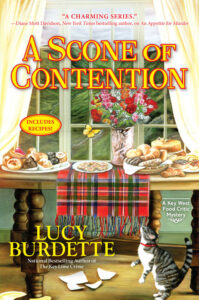 Lucy Burdette writes the Key West food critic mystery series published by Crooked Lane Books. Number twelve, A Dish to Die For, will be in bookstores on August 9. Death with All the Trimmings, A Deadly Feast, The Key Lime Crime, and A Scone of Contention all feature chefs as suspects or victims. All the books feature food, some poisoned, some plain delicious. A Dish to Die For is Lucy’s first deep dive into a vintage cookbook as plot device. 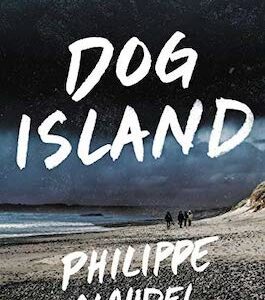 It was a Monday morning in September, on the beach, when it all began. It is called the beach, for want of a better term,...
© LitHub
Back to top