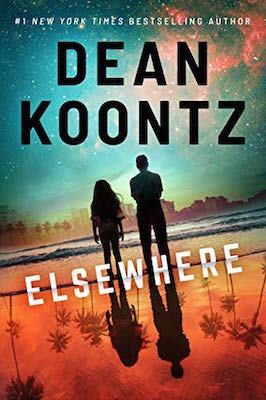 The following is an exclusive excerpt from  Elsewhere, by Dean Koontz. Ever since his wife left, Jeffy Coltrane has tried to make sure that he and his daughter Abby have a peaceful, normal life. But when a local crackpot nicknamed "Spooky Ed" arrives and asks them to guard an object he calls "the key to everything," they're not sure what to do. Then a group of men show up at their home, and Jeffy and Abby accidentally activate the key.

The eerie ululation of coyotes on the hunt issued from the farther end of the canyon, and a scrim of cloud diminished the moon, so that the silvered yard grew tarnished.

“I’m leaving this with you,” Ed solemnly intoned, holding forth the soiled, string-tied box, “because the fate of humanity depends on it never falling into the wrong hands and because, of everyone I have known in my life, I trust no one more than you, Jeffrey Wallace Coltrane.”

“That’s very sweet, but you hardly know me,” Jeffy said.

“Damn if I don’t!” Ed roared. “I know your heart. I trust my gut about you. My gut, your heart. If you don’t do this, if you don’t help me, you will be condemning your daughter to a life of terror, perhaps slavery or death! ”

Even in the soft amber glow of the porch lamps, Jeffy could see that Ed’s face had darkened with a rush of blood. His rapid pulse grew visible in both his neck and temples, as though he were working himself into a stroke or aneurysm.

The old man slid forward on his rocking chair, holding out the box. His voice quieted to an intense whisper. “Listen to me. Listen, listen. I’ve used the key to everything over a hundred times. I’ve seen horrors indescribable. I should destroy it, but I can’t. It’s my baby, my beautiful work of genius. I can’t put it in a safe-deposit box, because they’ll search bank records coast to coast. I can’t leave it with anyone I’ve ever known in my former life. They’re watching those people. I can’t dig a hole and bury the damn thing, because what if some poor fool who hasn’t been warned about the danger of it finds it and turns it on? You must hide it well. They’ll suspect everyone in the canyon, anyone with whom I might have come into contact. They’ll skulk around, looking, searching, those swine. After all, it cost seventy-six billion dollars.”

“Oh, it’s worth much more than that. It’s worth the world.

They’ll never stop looking for it.”

If a screw had been loose in Ed’s head, it evidently had fallen away from whatever parts of his mind it had previously kept securely connected. He was wide-eyed, suddenly glistening with a thin sweat, in great distress. Jeffy felt sorry for him. Ed was     a well-educated man, a scholar, perhaps once a highly regarded professor of history or literature or philosophy, now succumbing to dementia. A tragedy.

The kind thing to do, the only thing to do, was to humor him. It would be cruel to disrespect him and treat his paranoid fantasy as the delusion that it was. Jeffy slid forward in his rocker and accepted the package.

“I’m certain you’ve got a long life ahead,” Jeffy assured him. “After a year, obtain a barrel. Can you do that?”

Ed seized Jeffy by one knee and squeezed for emphasis. “Barrel, oil drum, an enclosed cylindroid of metal. Can you obtain one?”

“Yes, exactly, I forgot, a mason. After one year, if I do not return, fill a barrel half full of concrete. Put this package in the barrel. Finish filling the barrel with concrete, so the package is encased. Can you weld?”

“Weld the lid of the barrel shut. It will then be very heavy, don’t you think?”

Ed took his hand from Jeffy’s knee and gave him two thumbs up. “Convey the barrel into a rental truck. Take it to the harbor. Can you drive a boat?”

“Anything up to about thirty-six feet.”

“Charter a boat and take the barrel out to sea and roll it overboard in deep water.”

“A thousand feet should do it. No less than five hundred.” “Consider it done. That is, if you don’t return in a year.”

At the very moment that the cloud freed the moon, a look of relief wiped the anxiety off Ed’s face. “I knew you were the right man. From the first time I ever sat on this porch with you, I knew.” He rose to his feet. “Never open the box, Jeffrey. Never touch the thing in it. Keep your promise. The thing in that box can bring you only misery. The fate of the world is in your hands.”

Ed’s delusions were nothing if not grandiose.

Getting up from his rocker, Jeffy said, “Well, whenever you want it back, a year from now or tomorrow, it’ll be here, Ed.”

“A year from now or never. Tomorrow, the canyon will be crawling with those despicable swine. Hide it well.”

After adjusting his bow tie and smoothing the panels of his sport coat, he went to the porch steps and descended and moved onto the moonlit lawn.

He paused and gazed at the sky and then addressed Jeffy once more. “‘Like a ghastly rapid river / Through the pale door / A hideous throng rush out forever / And laugh—but smile no more.’ A few lines from Poe. Don’t use the key, Jeffrey. Don’t open the pale door.” He started to turn away but then had one more warning to deliver. “I’ve got a demonic posse on my trail. Devils, fiends! When the swine come snorting around, they won’t be who they claim to be. Even if you give them the box, you won’t be rid of them. Once they know you’ve been in possession of the key, the cursed yet wonderful key, they’ll assume you know too much. They’re ruthless. They’re murderers. Beasts. They’ll . . . make you disappear. Hide it well, Jeffrey. Save yourself and your girl! Hide it well!”

He crossed the yard to the lane, turned right, and headed into the canyon.

Sadness and pity took some of the shine off the moon-polished night. Perhaps the man had been an eccentric all his life, but until this evening, he’d been an engaging companion during his visits and never before wandered into alleyways of dementia.

Ed walked out of moonbeams, and shadows engulfed him, and he disappeared under the branches of the overhanging oaks.

Excerpted from Elsewhere, by Dean Koontz, with permission from the publisher, Thomas & Mercer. Copyright © 2020 by The Koontz Living Trust. All rights reserved. 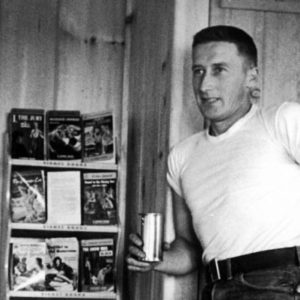 The Strange History of Mickey Spillane and New Zealand's "Jukebox Killer" Allegedly written in just nineteen days, Mickey Spillane’s 1947 book, I, The Jury, was one of seven bestsellers the author...
© LitHub
Back to top