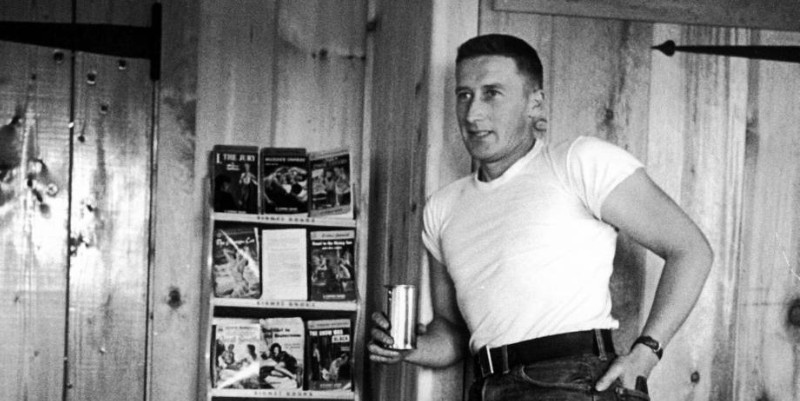 In 1950s New Zealand, public fear over American pulp novels reached its unlikely peak, with one boy stabbed and another hanged for it.

Allegedly written in just nineteen days, Mickey Spillane’s 1947 book, I, The Jury, was one of seven bestsellers the author pounded out in the space of four years. These novels rapidly made Spillane a global culture phenomenon, and also ignited a fire storm of condemnation and censorship for their graphic sex and violence. Critics were confounded by his popularity and even his publisher, New American Library head Victor Weybright, was at a loss to understand it. “I don’t think we can even judge Spillane’s appeal by logical mystery standards,” he said in 1950. “His magic in our market seems to consist of a sort of existential vibration, to which the readers out yonder seem able to tune into.”

That vibration was felt as far away as New Zealand, at the time a small, isolated nation of under two million people. And it was there that the controversy around Spillane arguably reached its peak when his work became embroiled in one of the country’s most sensational murder cases of the 1950s. The crime combined an almost perfect storm of concerns: immigration, out of control youth culture, and what many viewed as the negative moral and education influence of American popular publications, particularly pulp fiction.

According to Redmer Yska’s 1993 book, All Shook Up: The Flash Bodgie and the Rise of the New Zealand Teenager in the Fifties, worries about Spillane’s books first surfaced in New Zealand in 1952, fuelled by church groups and parents’ associations opposed to material deemed harmful to the morality and educational standards of the young. These concerns, which occurred more or less simultaneously in a number of countries in the first half of the 1950s, are now associated with emergence of the teenager as a distinct social category and the creation of markets specifically catering to them in reading material, clothing, music and film. The young were also viewed as particularly susceptible to what many educators and psychologists regarded as the pernicious influence of sex and violence in comics and pulp.

Official condemnation of Spillane’s work united both sides of New Zealand’s political divide. Jack Marshall, the attorney general in a conservative national government, condemned the author’s books and declared private investigators in most detective fiction as “seldom better than the gangsters, perverts and psychopaths which [sic] run through the pages.” People’s Voice, the newspaper of the New Zealand Communist Party, stated that Spillane’s books were “bestial ravings, sex perversions and maniacal killings, a fascist glorification of brutality and police, filth, repulsive to sane people.” The Party was particularly aggrieved by the plot of Spillane’s 1951 novel, One Lonely Night, in which Hammer battles Reds in New York.

But the controversy reached a crescendo when a young man, Johnny McBride, was fatally stabbed in the neck as he was leaning over the jukebox in Auckland’s ‘Ye Old Barn’ milk bar (the equivalent of what Americans once referred to as a soda fountain) on a Tuesday night in downtown Auckland on New Zealand’s northern island, in July 1955. His assailant, dubbed ‘the Jukebox Killer,’ by the city’s tabloid, was another young male, Albert Black. Only vaguely acquainted with each other when the killing occurred, both men came from a war-torn United Kingdom to New Zealand, where they were put in foster care as part of a scheme to give disadvantaged young people a new start. Prior to his death, McBride had worked for a year as a farm hand. He was “very fond of Mickey Spillane and read a lot,” his employer told the press. “He normally dressed quietly but when he went into town, he wore very loud garments.” It took police several days to discover that McBride’s real name was Alan Jacques. Such was the young man’s infatuation with Spillane that he had taken the name Johnny McBride from the main character in a 1951 Spillane novel, The Long Wait.

Jacques/McBride and Black were part of a floating scene of young people who worked as shop assistants, manual labourers, and drivers by day, and frequented the cafes, milk bars and dance halls of Auckland by night. Both men had a taste for American fashion, films and music. And both were members of a now forgotten but once prominent 1950s working class youth subculture, unique to Australia and New Zealand, known as ‘bodgies’ (female members were referred to as ‘widgies’).

First appearing in Sydney in the late 1940s, bodgies were initially Australian seamen who impersonated the American black marketeers that were active during the war. They frequented milk bars, liked rock and roll, and borrowed a mix of fashion styles from English Teddy Boys and what were referred to in 1950s America as ‘greasers’. In Australia, bodgies had been tied to a range of social ills, in particular an alleged upsurge in youth crime.

New Zealand was in equal parts scandalised and titillated by the details of Auckland’s bodgie and widgie scene that emerged during the public court case into the Ye Old Barn stabbing, particularly the testimony of the sixteen-year-old widgie whose affections the stabbing had been over. The McBride/Jacques killing ‘led the authorities to uncover an American-styled teenage wasteland developing under the noses of respectable Aucklanders,’ wrote Yska. It was a world of drinking, sexual permissiveness, ‘rumbles’ with bottles and knives, saturated in American culture: everything from Elvis to Marilyn Monroe and, of course, Spillane, played out in the city’s dingy bedsits, boarding houses, milk bars and dance halls. Some young New Zealanders were so enamoured with the United States they took on American accents.

Black, whose story was fictionalised in This Mortal Boy, a 2018 novel by New Zealand writer, Fiona Kidman, hailed from a desperately poor family in Belfast. He was twenty when he arrived by ship, had taken various unskilled jobs and was unemployed when he stabbed McBride/Jacques. But the New Zealand government, deeply unsettled by the revelations of youth excess that emerged from his trial, moved to make an example of him.

Black’s case was not helped by a spate of violent youth crime that had already occurred in New Zealand in 1955. In March, a bodgie called Frederick Foster, a 24-year-old unskilled migrant from Liverpool, walked into another Auckland milk bar and murdered his ex-girlfriend with a shotgun. Capital punishment had been reintroduced in 1950 and Foster, dubbed ‘the milk bar murder’ by tabloids, was hung. In April, Eddie Te Whiu, a 23-year-old Maori labourer, killed an elderly widow in a robbery gone wrong. He was sentenced to death for the crime. And in June, two young women were arrested for the murder of a Christchurch mother, one of them her daughter, Pauline. Both were too young for the death penalty. The case, depicted in the 1994 Peter Jackson film, Heavenly Creatures, was particularly shocking to polite New Zealand society for the inference that it involved mental ill-health and possible lesbianism between the young girls.

The press drew links among the Black’s actions, these other crimes and what some claimed was poor screening of immigrants from the United Kingdom. The McBride/Jacques killing, and the violent crimes that preceded it, also became a focus for anxieties related to urban drift, the breakdown of parental control, and the growing financial independence of the young in the midst of the post-war economic boom—in New Zealand’s case tied to the demand for wool due to the war in Korea. In the mix were also the perceived dangers of American cultural influence. As was the case in neighbouring Australia, there had been controversy over the presence of American servicemen in New Zealand during the war. With money to spend, they were viewed by some as a moral danger to local women, already weaned on Americanised notions of romance via magazines and Hollywood movies. The authorities were also concerned about the impact of American pulp fiction on the young.

The year 1955 saw the height of official attempts to crack down on imported popular print material. In reference to Spillane’s books, Attorney General Marshall told parliament, “They are entirely devoid of any literary or other merit and are devoted to the wanton depiction in gross detail of brutality, violence and sex.” The Justice Department initiated a special flying squad that went around the country confiscating pulp paperbacks.

The Long Wait, the Spillane novel from which Jacques took his moniker, is a stand-alone that does not feature Mike Hammer. The protagonist, Johnny McBride, loses his memory in a car crash. Two years later, a clue leads him back to his hometown where he discovers he is a murder suspect. He decides to clear his name, an effort which brings him up against the town’s main organised crime figure. The book is full of sex and violence. Mexican born Anthony Quinn played McBride in a 1954 film version by British director, Victor Saville, who would also direct Spillane’s My Gun is Quick in 1957. Infusing the role with his characteristic tough intensity, Quinn as McBride is a tornado of violent energy, tearing apart the archetypal American noir bad town in an effort to uncover his real identity and clear his name. He does this while stylishly dressed and, it seems, always with a cigarette in his mouth and a drink in his hand.

While the film resides firmly in B-noir territory, the story is elevated by the amnesia angle. As Alain Silver and Elizabeth Ward state in their 1993 book, Film Noir: An Encyclopedic Reference to the American Style, it gives ‘the hero a sense of hopelessness compounded by the frustration of his loss of identity [and this] instils a distinct existential bias into McBride’s search.’ The same could be said of Jacques and Black, young drifters without a fixed sense of themselves and where they belonged, who found themselves on the other side of the world, and who were high on fictionalised notions of an America that must have seemed impossibly exotic in 1950s New Zealand.

According to Yska, the campaign against American pulp ran out of steam by 1956. By then, the New Zealand government had already made an example of Black. Found guilty, he was hung within a few days of Christmas in 1955. His execution, one of eight that occurred in New Zealand between 1951 and 1957, helped galvanise opposition to capital punishment, which ceased in 1958. 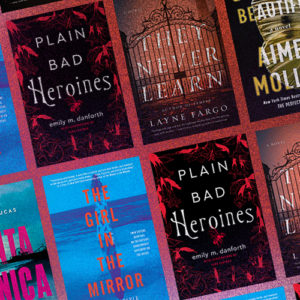 Well, readers, here in Toronto fall has struck. Our first pandemic autumn will go by in a flash, followed by our long pandemic...
© LitHub
Back to top