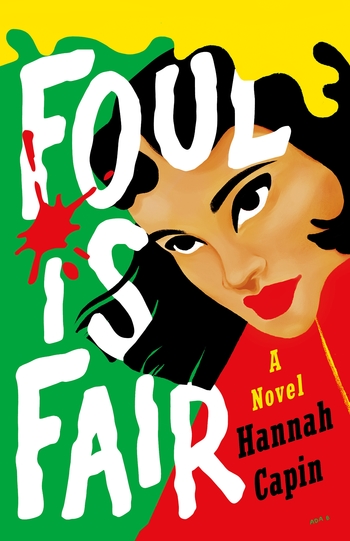 The following is an exclusive excerpt from Foul is Fair, by Hannah Capin. Jade, Jenny, Mads, and Summer are the most popular girls in their school. But on the night of Jade's Sweet Sixteen, they crash a St. Andrews Prep party, where Jade is targeted by a bunch of boys. Shortly she transfers there, planning to make each boy pay for what he did to her...

“You chose the perfect boy,” says Summer, after school. “Too perfect,” says Jenny.

We’re standing against the south wall of St Andrew’s, shadowed in a stone alcove, looking down the golf-course- grass slope to the field. Dark sunglasses and internet intel. “I know,” I say.

Jenny wrinkles her nose. “You’re doing him a favor, get- ting him to kill all his friends. He’s boring as fuck right now.”

The rest of us laugh. Jenny says, “God, Summer, you’re such a romantic.”

“He is,” says Summer. “He’s the least asshole boy on the whole team.”

Jenny runs her tongue over her teeth. “The whole team roofies girls.”

“I’m just saying, if everyone he knows does this shit, if they’ve been doing this shit since before it was even them, and it’s just—the way things are, but he doesn’t, he won’t—”

Article continues after advertisement
Duffy’s caption says, To the nights we won’t remember. Connor’s comment, right below, says, we will, she won’t.

“Look.” Summer holds her phone out to us. She has a whole album saved already, the grid filling up the screen: GOLDEN BOYS. She clicks on a post: Duncan and Duffy and Connor and Banks at a party, arms draped over each other’s shoulders, a liquor bottle gleaming in Duncan’s hand. Duffy’s caption says, To the nights we won’t remember. Connor’s comment, right below, says, we will, she won’t. It’s not from Friday; it’s not even from this year.

“Okay, fine, so call it a cult,” Jenny says, nudging against Summer. “And our boy still rolls with them.”

“He doesn’t do what they do.” Summer scrolls and scrolls, past Duncan and Duffy and Connor and Banks, past Dun- can’s little brother who mixed the drinks on Friday night, past boys from last year and the year before, off studying prelaw and economics now. All slinging comments and collecting hearts on every post. “He won’t. He’ll never really be one of them.”

“He doesn’t stop them, either,” says Jenny. “Very fucking honorable.”

A breeze curls around us in the shadows, hot pavement and freeway exhaust. “He wants to be honorable, but not as much as he wants approval,” says Mads, staring down at the painted-green field. “He’ll sell out enough to stay in with them, but he can still pretend he’s innocent.”

The first few St Andrew’s Preppers are winding down the path to the bleachers. The away team bus pulls up: tinted windows, shiny red-white-blue paint, VIKINGS blazing along the side. “He’ll sell out to take Duncan’s place,” I say. “He’s ambitious.”

“He’s weak,” says Jenny, and she steals Summer’s phone, and Summer lets her.

“Both,” says Summer. “Once Jade gets in his head, he’ll do anything she tells him to do.”

I’m smiling too wide but I don’t care.

“Jade has an eye,” says Mads. “She could see all that just from the picture. Before we spent all weekend digging up their secrets.”

Jenny laughs into whatever golden-boy portrait she’s flip- ping past. “God, I love it.”

“Just,” says Summer, “are you sure?” She’s lip-biting the way she does whenever she’s worried about something.

“That’s cute,” says Jenny, and her eyes linger on Summer’s until Summer does a movie-perfect blush. “Cute that you feel so bad for this asshole and not for all those boys you’ve black- widowed.”

Summer still blushes. “That was different.”

“Damn straight it was different. You were just bored. Jade’s crusading.”

“I know the boys I ruin,” says Summer.

“And I know the boys I’m about to ruin,” I say. Lilia’s name lights up on my screen: Meeting at the field in five, see you there?

I leave Lilia on read and face them, all three of them, against the gray stone. “He’s a target,” I say.

—but still so fucking weak it turns my stomach. “Are you in?” I ask even though I don’t need to. “Yes,” says Jenny.

The breeze curls up again, hot and greedy. “Go,” I tell them. “Exactly like we planned it.”

We clasp hands for one heartbeat. All four of us, ready for war.

I walk out into the sun, alone.

We sit in the very front row, on display. Lilia, the queen about to shatter. Piper on her right. New-girl Jade on her left. The flock fanning out on either side and one row back, whispers and laughing and unbuttoning one-two-three lower than they can get away with in the hall.

I unbutton one more than that and loosen my tie so the knot hits just under the made-you-look V. My silver crucifix glows against my skin.

New-girl Jade is brazen and brash and everybody already knows it.

“Game day on your first day. Lucky bitch,” says a flock-girl, poking between Lilia and me. “Have you ever—”

“The boys.” Piper cuts her off, so much sugar in her voice that Lilia’s lips do an anxious little twist. “Let’s tell her about the boys.”

“She’s going to meet them right after the game,” says Lilia. “Seriously,” the first flock-girl says. “So thirsty, Piper. God.” Piper doesn’t bother turning to whoever said it. “I’ve already got Duffy,” she says. “Just looking out for the new girl. In case she’ll slum it with a high school boy.”

“Oh!” says Lilia, not even a sigh. Awake enough that I check her hands first, for blood. But she’s sifting through her bag and she comes back out with a lipstick that uncaps to rotting bright St Andrew’s blue. She draws one line on each cheekbone, under her eyes. Then she paints her right-hand girl, and Piper preens like Lilia’s anointing her.

Lilia turns to me, on purpose, a spark almost like life in her dead eyes. So are you, she said when I said you’re fucking crazy. Like she already knew. Like she knows I’ll be the one who does the killing.

But then she stripes the lipstick across my cheeks, left- right, cold war-paint.

She doesn’t know anything. She’s dead and empty.

Past her, Piper says, “Doesn’t take much to get on your good side anymore, does it?”

“It’s not a competition,” Lilia sighs.

Piper nudges her too hard. “Everything’s a competition, sweetie. You know that better than anybody, don’t you?”

Lilia can swat away the rest of Piper’s needling bites, but this one lands. “Piper, God—” she starts, but then—

The St Andrew’s boys run out onto the field, fists and crosses, yelling loud. The whole flock flies up, and everyone behind us, too.

Right this blistering second the little field feels like a whole goddamn colosseum.

—the alpha boy, leading the charge, eyes a startling piercing gray that sears everything he looks at even with his hel- met in place. The boy whose father ruled this field once upon a time and whose brother will rule it next. The boy who holds all the power, the same way his family does, and decides who joins the pack. The best, the fastest, the one they all watch and obey—

Next to me, Lilia slips and grabs at Piper’s arm. Piper wrenches away and her sabre slashes the space between them and glances off Lilia’s thigh. She stops screaming to look down, and there’s a hair-thin red line on her skin. She screams again, louder.

—the favorite, the one who’d hide the body for Duncan if he killed. If. Piper’s perfect match. She shrieks so shrill for him that he turns and sees her and raises his fist. Piper stops for a breath and catches my arm behind Lilia’s back and says, “Jealous yet?”

—the worst of them. The ugliest, the one everybody knows does the kind of shit only blond boys with director-producer fathers can get away with, the one who came so close to ad- mitting it on Duffy’s Friday-night picture, damm banks, the slut did some cat scratch shit on ur arm, fukkin wild, that I can’t believe the rest of them haven’t taken him out themselves to keep their own names clean—

—the biggest, towering tall and broad-shouldered. A defenseman. The kind of hair-trigger brute who can slam his fist against the spot where your ribs join together and you’ll forget how to breathe—

The rest of them: Porter, the goalkeeper, the one who guarded the door. Malcolm, Malcolm Duncan, the skinny sophomore who told his big brother yeah, I’m sure they’ll work, made the fucking drink myself. Ross and Lennox and Seward and O’Donnell: nobodies who don’t matter.

And Mack. Square-shouldered and clean-cut and honor- able, eyes right ahead.

The boys from the white-sheets room on my sweet sixteen. All of them, and their ride-or-die brothers. Charging across the field in blue and white and battle yells.

I’m supposed to be afraid of them. Forget everything I thought I felt and collapse right here, weaker than Lilia.

The boys circle together next to their benches, right in front of us. Close enough that if I wanted to, I could jam Piper’s sword into Connor’s throat before anybody could think about stopping me. If I went fast I could get Duffy, too, before the rest of them threw me down.

For a second everything flashes red. Stains that bloom from their chests and turn the whole field warm and metallic. I raise one fist, just like Duffy did, and I scream with all my might. The boys crush close, yelling, crosses up and cracking

together. Duncan and Duffy and Connor and Banks.

I know it better than I’ve ever known anything: every second in my whole life has just been practice for what I’ll do to these boys.

This is why I’m alive. 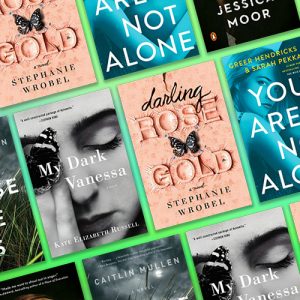 5 Psychological Thrillers You Need to Read This Month Well, hello March, you certainly are a little minx. This psychological thriller list is one of the most twisted I’ve written,...
© LitHub
Back to top