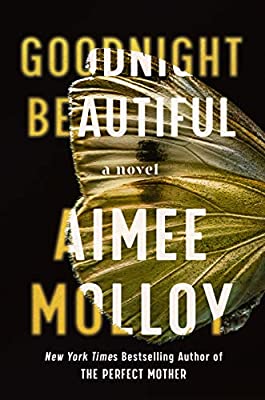 The following is an exclusive excerpt from Goodnight Beautiful, by Aimee Molloy. Sam and Annie, newly married, are excited to leave New York City behind and move upstate to his sleepy hometown. Annie is bored all day, while Sam, a psychiatrist, conducts his work from downstairs. Through an upstairs vent, though, she can hear everything uttered in his office. It seems like she's the one keeping all the secrets, until one day Sam leaves with a mysterious visitor and does not return.

An ass so perfect there’s no way Sam can pull his eyes away as he walks half a block behind her up the hill, past the cheese shop, the bookstore, the lauded new wine place with the bright red door. He pretends to browse the table of American flags, half off at Hoyts Hardware, as she approaches the Parlor, the upscale small-plate restaurant that opened three months ago. A man on his way out behind his wife holds the door open for her, lingers to catch a glimpse of her from the back, no doubt praying his wife doesn’t see.

The restaurant took over the space once occupied by two generations of Finnerty dentists, the brick facade replaced by a sleek glass wall. Sam pauses in front of it, watching her cross the room and sit at the bar.

She takes a book from her bag, her shoulder blades rising like the wings of a bird under a thin white tank top as he passes, stopping to look at the listings in the window of the realtor’s office next door. Exactly nine minutes he waits, long enough for her to be nearing the end of her drink, feeling the familiar rush of adrenaline as he loosens his tie an inch and turns around.

The door to the Parlor opens as Sam approaches, releasing an air-conditioned gust into the humid evening air. “Dr. Statler.” A patient is standing in front of him, and he has to hunt for her name. Started two weeks ago. Carolyn. Caroline.

“Catherine,” Sam says. Fuck. What absolutely never happened to him back in New York happens all the time here— running into patients on the street, in the grocery store, yesterday at the gym, where he ran three miles on the tread- mill while Alicia Chao, the newly divorced humanities professor with a history of anxiety, worked the elliptical—and it makes him feel off-balance every time. “How are you?”

“I’m good,” Catherine says. Catherine Walker. She’s a well-known painter in New York, bought a million-dollar home overlooking the river. “This is Brian.” Sam shakes his hand. Brian: the restaurateur who doesn’t satisfy her in bed. “I’ll see you tomorrow,” Catherine says as Sam steps inside.

“Will you be dining with us tonight?” the girl at the podium asks. She’s young and blond. Tattoos. Very pretty. An art student is his guess, with a piercing hidden somewhere under her clothing, the type he once would have assuredly had in bed by ten tonight.

The bar is crowded with recent transplants from the city, sharing plates of roasted brussels sprouts and nine-dollar pickles. Sam makes his way toward the woman, allowing his elbow to graze her arm as he passes.

Her purse is resting on the stool between them, and Sam bumps one of its legs as he sits, hard enough to knock it to the floor. “Sorry,” he says, reaching down for it.

She smiles as she takes it from him, hooks it under the bar, and returns to her book.

“What’ll it be?” the bartender asks. He’s got slicked-back hair and shockingly white teeth.

“A man with expensive taste,” the bartender says, as Sam pulls a credit card from his wallet. “My favorite kind.”

She smiles tersely. “That’s nice of you. But my purse is fine.” “No, I insist. What are you drinking?”

“A martini? Would have pegged you more as a rosé drinker.” “How gendered of you,” she says. “But you know what they

He’s learned to observe people unobtrusively, a professional necessity that allows him to see that underneath the white tank top she’s wearing a pale pink bra with lace trim, that the skin on her shoulders glistens. “No, what do they say about martinis?” Sam asks her.

“‘The proper union of gin and vermouth is a great and sudden glory; it is one of the happiest marriages on earth and one of the shortest-lived.’” The bartender sets her drink in front of her. “Bernard DeVoto.”

Sam nods down at her book. “Is that who you’re reading?” She flashes the cover, revealing an image of a woman in silhouette. “No, this is that thriller everyone’s talking about.”

“Good enough. Another unreliable female narrator. I’m get- ting a little tired of the way women are being depicted in fic- tion right now, to be honest.”

“Oh, you know,” she says. “That we’re prone to neurosis and/or hysteria and our judgment shouldn’t be trusted, thus legitimizing the hegemonic idea of masculinity and men’s dominant position in society and justifying the subordination of women.” She picks up her glass and returns to her book. “Anyway, thanks for the drink.”

Sam allows her to read one more page before leaning in. “Hey, smarty pants. You visiting for the weekend?”

“You’re kidding. Chestnut Hill is a small town. I think I would have remembered seeing you.”

“I’m new.” She looks up at him. “Moved here last month from New York. A ‘cidiot,’ I believe we’re called by the locals?” She slides an olive from the plastic stirrer with her teeth, and he’s imagining how salty her lips must taste when he feels a hand on his shoulder. It’s Reggie Mayer, the pharmacist. His wife, Natalie, is a patient; she thinks Reggie smells like salami. “Natalie’s not feeling well,” Reggie says, holding up a plastic to-go bag. “Bringing home some soup.”

“Tell her I hope she feels better,” Sam says, leaning in a few inches, detecting no smell.

“Doctor?” the woman says after Reggie has left.

She laughs. “You’re a psychologist.”

“What? You don’t believe me?” Sam reaches for his wallet again and pulls out a business card, which he slides next to her drink.

“Weird,” she says, reading the card. “Would have sworn you were a podiatrist. So, you want to analyze me?”

“What makes you think I haven’t already?”

She closes her book and turns to face him. “And?”

“You’re smart,” he says. “Confident. An only child is my guess.”

“Two devoted parents. Private school. At least one graduate degree, probably two.” Sam pauses. “You’ve also had to be- come adept at shouldering the burdens of being an exceptionally beautiful woman in the world.”

She rolls her eyes. “Wow, that was bad.”

“Perhaps. But I’m serious,” he says. “I’d bet if you were to survey every man in this place as to who they’d want to take home tonight, one hundred percent of them would say you.”

“Ninety-nine percent,” she corrects him. “The bartender would say you.”

“Constantly being on the receiving end of the male gaze can have an effect,” Sam continues. “We refer to it as objectifi- cation theory.”

“Do you think I should get a therapy dog?”

“Are you kidding? A hot girl with a dog? That’ll make matters worse.”

She smiles. “Did you come up with all of this while you were walking behind me up the hill, staring at my ass? Or was it while you were standing outside, watching me through the window?”

“I was on a phone call,” Sam says. “Existential crisis that needed immediate attention.”

“That’s too bad. I was hoping you were out there building up the courage to come hit on me.” She keeps her eyes on his as she lifts another olive to her lips and sucks the pimento out of the center, and there it is, the feeling he’s been chasing like a drug since he was fifteen years old, the thrill of knowing he’s about to plant his stake into a beautiful woman.

“You do have an exceptional ass,” Sam says.

“Yes, I know.” She looks down at his Johnnie Walker Blue. “Speaking of exceptional, I’ve heard good things about this drink of yours. May I?” She holds it up to the light and studies the color before lifting it to her lips and draining the glass. “You’re right. That’s a good drink.” She leans in close, the scent of his whisky on her breath. “If you weren’t a married local therapist, I’d invite you inside my mouth for a taste.”

“How do you know I’m married?” he asks, the heat rising on the back of his neck.

“You’re wearing a wedding band,” she says. He slips his hand in his pocket. “Says who?”

“Does your wife know you’re out tonight, analyzing the confident only children of Chestnut Hill, New York?”

She laughs. “You don’t even know my name.” “It’s not your name I’m interested in.”

“You guys doing okay?” It’s the bartender. He’s back, scratching an itch over one eye, as she slowly slides her hands up Sam’s thighs.

The bartender walks away as her right hand arrives between his legs, where it remains for another minute at least, her eyes locked with his. “My goodness, Doctor,” she says. “From what I can tell, the poor sucker who married you is a lucky woman.” She returns her hands to the bar. “Be sure to tell her I said so.” “I will.” Sam leans forward and softly cups her cheek, his breath hot on her ear. “Hey, Annie Potter, guess what? You’re a lucky woman.” She smells like Pantene shampoo and is wearing the earrings he gave her last night. “Now put your hand

back on my dick.”

“I’m sorry, Dr. Statler,” she says, pulling away from him. “But that was just part of your anniversary gift. You’ll have to wait until we get home for the rest.”

“Well, in that case.” Sam raises his hand and signals for the check as Annie picks up the stirrer and bites into the last olive. “How was your day, dear husband?” she asks, smiling at him.

She brushes a hair off his shoulder. “How was she?”

Annie sighs. “Everyone over there seemed so grumpy yesterday. They hate the new management.”

“It’s fine, Annie,” Sam says, not ready to replace the feeling of his wife’s hand between his legs with thoughts of his mother sitting alone and unhappy at the five-thousand-dollar-a-month nursing home he moved her into six months before.

“Okay, fine, we won’t talk about it,” Annie says. She raises her glass. “To another successful week of marriage. These past six weeks have been so good, I give us at least six more.”

Sam adjusts Annie’s tank top to cover the bit of bra strap on display at her shoulder. “You sure you don’t resent me for all this?”

“Giving up New York. Moving to this shithole town. Marrying me.”

“I happen to love this shithole town.” She intercepts the check from the bartender and quickly signs his name. “And if nothing else, you’re very rich. Now come on, Doctor, take me home and pleasure me.”

She stands up, slowly slips her jacket back on. Sam follows her toward the door, so content at the sight of his wife walking in front of him through the restaurant that he barely registers the seductive smile from the pretty blonde at the podium as he passes. He has no need to notice things like that anymore. He’s a changed man. 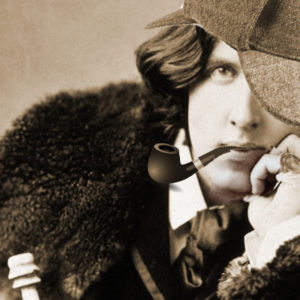 17 Crime Fiction Series That Use Real Historical Figures As Sleuths Real people often crop up in historical crime fiction. Some authors take it a step further and have them become sleuths....
© LitHub
Back to top