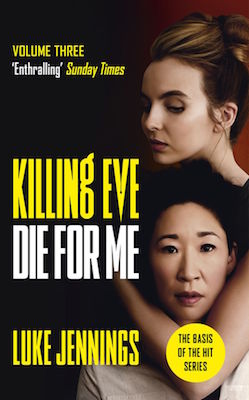 The following is an exclusive excerpt from Killing Eve: Die For Me, by Luke Jennings. Villanelle is back, and though the hunt for Eve seems to be over, something much bigger has just begun.

“I guess you should start calling me Oxana,” she says, a little regretfully.

“I guess I should. I liked Villanelle.”

“I know. Cool name. But too dangerous to use now.”

We’re lying at opposite ends of a huge old enamel bath in Dasha’s apartment. Tall windows overlook a broad high- way from which the rumble and hiss of traffic and the clanking of trams are dimly audible. Oxana, needless to say, has taken the end of the bath without the taps, but the hot water is bliss after our confinement in the container.

The apartment is on the third floor of a massive neoclassical block in an area called Avtovo. The building must once have been very grand, the sort of property where senior Communist Party officials and their families lived, but it has clearly been in decline for decades. The fittings are worn, the lift creaks, the plumbing clanks and grumbles. “Look at the color of this bath water,” Oxana says, playing with my toes.

“I know, gross. And you farting all the time doesn’t help.”

“When you live alone, you get good at stuff like this.”

“Dasha and I were in Dobryanka prison together, and under the criminal code, the vorovskoy zakon, we are sisters. Murder sisters. That means that she has to help me. I told her I was a torpedo, a shooter, for a powerful family in Europe, and that I had to get out fast. She doesn’t need to know more than that at this stage.”

“She didn’t ask about you.”

“You want me to say you worked for MI6? Seriously? I told her what I had to tell her to get her trust, because right now, we need her. We need new identities, new passports, all that shit, and she can fix it. Or at least she’s connected to people who can fix that. Basically, we can stay here as long as we need to, she’ll help us, and she won’t give us up. But she’ll also expect me to do something for her in return. Something big. So we have to wait and see what that something turns out to be.”

“So what am I supposed to do?”

“Nothing. Can we have some more hot water? It’s getting cold at this end.”

“There isn’t any more hot water. What do you mean, nothing?”

“I mean you just, I don’t know, hang out or whatever. Dasha knows you’re my woman. She won’t involve you in any criminal stuff.”

“Wow. That sounds… Fuck, I don’t know what it sounds like.”

She takes an experimental bite of my big toe. “You want to be a gangster, pupsik?”

“I want to be by your side. I didn’t come all this way just to go shopping.”

“I’m weird? You’re the one in the bath with the psychopath.”

“I did. I’m going to make you look so amazing.”

“Yes, you are. You know your feet taste of Emmental cheese? The sort with the big holes in?”

“You are seriously fucking weird, you know that?”

“I’m weird? You’re the one in the bath with the psychopath.”

I try to get my head comfortable against the taps. “What sort of criminal stuff is Dasha into?”

“The usual. Smuggling, credit cards, protection, drugs . . . Probably mostly drugs. Her father Gennadi led a brigade for the Kupchino Bratva, which controls the St. Petersburg heroin trade, and when he retired he passed the leadership of the brigade to Dasha. It’s almost unknown for a woman to hold rank in the gangs, but she was already a fully initiated vor, and people respected her.”

“Eve, pupsik, you have to move on from this morning. See it from her point of view. That Prekrasnaya Nevesta warehouse pays her to protect them, and we did make quite a mess in there. Dasha had to be seen to be taking control of the situation.”

“She didn’t have to torture me.”

“She only tortured you a bit.”

“She’d have tortured me a lot if you hadn’t turned up.”

“She was just doing her job. Why is it that when a woman is assertive in the workplace she’s always seen as a bitch?”

“I’ll tell you. It’s because we expect men to torture and kill people, but when women do it it’s seen as violating gender stereotypes. It’s ridiculous.”

“It really is. And just for your information”—she kicks bathwater in my face—“I’d appreciate a thank-you for rescuing you this morning.”

“Thank you to my protective, feminist girlfriend.”

Dasha, I have to admit, takes very good care of us. The apartment is impersonal, and the room she assigns to us has an unaired, unused feel to it. The windows, which are locked shut, have the thick, greenish look of bulletproof glass. But the bed is comfortable enough, and after break- fast, which is brought to us by a young woman who introduces herself as Kristina, we both fall fast asleep again.

When we wake it’s almost midday, and we’re ravenous again. The apartment appears to be empty except for Kristina, who has clearly been waiting for us to surface. Handing us each a warm down-filled jacket, she leads us out of the flat, and we descend to the street in the shuddering lift. My ankle is less swollen than it was, and although it’s still sore, I can walk. It’s good to be in direct sunlight. The sky is dark azure blue, and the morning’s snowfall has frozen, dusting the grimy, yellow-brown buildings with sparkling white. Lunch is a Big Mac and fries, and then Kristina walks us a short distance down Stachek Prospekt to a second-hand store in a converted cinema, the Kometa. The seats have been removed from the auditorium, which now holds rank after rank of clothing stalls. These offer everything from goth and punk fashions to old theater costumes, military and police regalia, fetish-wear and homemade jewelry. The place smells musty and cloying, as such places always do, and it’s oddly poignant to wander down the aisles beneath the art deco chandeliers, picking through the tattered residue of other people’s lives.

“In these clothes, you’ll look as if you’ve lived in St. Petersburg forever, like subculture people,” Kristina says. Tall and long-legged, with hair the color of wheat and a gentle, hesitant manner, she’s an unlikely member of a gangster household. She doesn’t speak often, and when she does it’s so quietly that we strain to hear her.

In this spirit, I make a point of choosing things I’d never have considered in my former life. A midnight-blue velvet coat, its silk lining in tatters, its label identifying it as the property of the Mikhailovsky Theatre. A studded jacket painted with anarchist slogans. A mohair sweater striped in black and yellow like a bee. It occurs to me that I’m enjoying myself, something I’ve never felt while buying clothes before. Oxana seems to be having a pretty good time too. She’s as ruthless out shopping as she is in every other area of her life, not hesitating to rip a garment out of my hands if she wants it for herself.

A visit to a nearby hairdressing and nail salon completes our makeover. Kristina pays for everything from a large roll of cash, which I’m guessing is Dasha’s. In the salon she sits quietly, staring into space, as Oxana and I are attended to. The stylist gives me a short, choppy bob, while Oxana gets a spiky pixie cut. My nails end up turquoise, hers black. When we’re done Kristina gives us a rare, shy smile. “Now you look like proper Russians,” she tells us.

Afterward, we take a taxi to Aviatorov Park. Why Kristina wants to take us there, I’m not sure. Maybe it’s the nearest thing to a tourist attraction that Avtovo has to offer. As the sky darkens, and flurries of new snow whirl around us, we mooch across the near-deserted park to a frozen lake girded by dark, skeletal trees. On the far shore, a Soviet monument stands on a promontory. A MiG fighter aircraft leaping into the sky, arrested at the moment of takeoff. Kristina indicates it perfunctorily before continuing on her ghostly way along the icy lakeside path. Only then does it occur to me that she has been ordered to keep us away from the apartment for as long as possible, so that Dasha can search our possessions and decide what to do about us. Which might include selling us out.

I ask Oxana about this, and she’s doubtful. “The only people who’d be interested in me, in us, are the Twelve, and they operate at a much higher level than outfits like the Kupchino Bratva.”

“Dasha might have heard of them, though. Presumably she has access to all kinds of underworld information sources.”

“I’m sure she has, but they wouldn’t lead her to the Twelve.”

“Supposing she did make the connection. Just for the sake of argument.”

“How would she get in touch with them? On Facebook?” I nod, not quite convinced.

“Look, Dasha didn’t get to be a brigadier in a bratva by being stupid. If she breaks the vory code and betrays me to the Twelve or anyone else, she won’t ever be trusted again.

Also, I’d kill her. Maybe not immediately, but one day I’d come for her, and she knows it.”

The Crime Cinema Renaissance of 1990 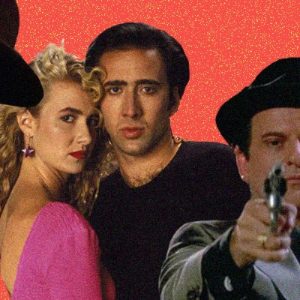 The Crime Cinema Renaissance of 1990 The Nineties were the last great decade for crime films, and no individual year was stronger than the very first: 1990. It...
© LitHub
Back to top