All the new shows and movies you need to get through a month of social distancing.

These are strange, sad times, and we all need some entertainment. Many of us might feel inclined toward a certain noir vision of the world, while others are just looking for a good, quality thriller. We need streaming services right now, and fortunately there’s still a lot to watch, maybe even too much to keep track of. That’s why every month we bring you a guide to what’s streaming now, for the discerning crime viewer. Kicking off with one we missed from late March…

Everything good and dark and brooding about the first two seasons of Ozark, Netflix’s hit rural noir, has been leading up to the point where we get to watch Laura Linney point a gun at Jason Bateman and also they own and operate a damn riverboat casino. What has brought us to this wonderful point? The magic of money laundering in rural America. This might well be the season we see the full Breaking Bad arc for Linney’s Wendy, and also a needed dash of seedy glamor seems to coming to the series, courtesy of that riverboat casino. B&Bs and strip clubs were fine for a while but it’s time we watch these characters jump up to the big leagues of washing dirty money. Vice begets vice, folks.

How to Fix a Drug Scandal (Netflix) (April 1)

You just know it’s going to be a good true crime documentary when you get that urgent-sounding violin in the background, don’t you? This four-part Netflix series covers one of the most profound scandals in recent judicial system memory, a story that’s been, at least in my opinion, surprisingly underreported on a national level. Sonja Farak was a chemist at the drug lab for the Massachusetts State Police in Amherst and, it turned out, was suffering from some crippling mental health issues and also had developed a severe addiction to the drugs she was supposed to be testing, including liquid meth. When she was finally found out, the state didn’t know what the hell to do. I still remember talking to lawyer friends back home, who were predicting a judicial apocalypse that more or less came true. Thousands and thousands of convictions have had to be thrown out, and the state courts are still dealing with the fallout, as well as some pretty shoddy attempts to limit the damage.

Yes the title sounds like it came out of an online Scottish Crime name generator, and come to think of it the whole setup—small town coastal Scotland crime drama led by the excellent David Tennant—does feel a little like a crime show built out of an algorithm of what has worked in the past, but actually this might just be the prize pick of a crowded field. Dark, brooding, visually impressive, genuinely suspenseful and with a stellar cast, Deadwater Fall has every chance of being a breakout series on this side of the Atlantic. If you don’t already have Brit-mystery-haven Acorn TV, this might finally be your reason. (Or your Mom might have it; you could check with her to see about sharing passwords.)

I’m going to make a confession. I’ve never seen an episode of The Good Wife or The Good Fight. I am assured by people I trust that these are excellent shows of consistently high quality and riveting drama and suspense. I believe them. I have never before seriously considered getting CBS All-Access, but you might well have it and you might want to know that this is in the pipeline and also since we’re all housebound maybe now is the time to consider new streaming services. Probably not CBS All Access for me, but everyone has their own cup of tea.

If I could buy stock in one show launching in April it would be Run, which looks like a neo-Hitchcock road trip fever dream, created by Vicky Jones, with an executive producer credit to her longtime collaborator, the woman with a golden touch, Phoebe Waller-Bridge. The setup is phenomenal: an ex-couple who made a decades-old pact that if one of them texted “run” and the other responded in kind, they would both bolt their lives and meet at Grand Central and take the hell off. And it happens. I can’t tell from the trailer whether the vibe is going to be somehow inspirational or just suspenseful and exhilarating and weird, but I’m leaning toward the latter. It looks a little North by Northwest and I’m very much there for it.

(Update: Sadly, Fargo Season 4 has been postponed as production was halted because of coronavirus concerns…)

After a long wait, Noah Hawley is back with a new season of this anthology Coen Brothers universe crime drama / meditation on the strangeness of life. The new series is set in midcentury Kansas City, MO, and looks to have more of a Miller’s Crossing atmosphere, as it follows a gang war between a Black organized crime outfit and the long-entrenched Kansas City branch of the Italian-American mafia. Chris Rock and Jason Schwartzmann star, so we can expect some really strange and cool line readings. Also, knife fights. I’ll admit I was out on Season 3 of this one but I’m all the way back now.

Based on the true story of a Long Island school scandal, Bad Education stars Hugh Jackman and Allison Janney and follows one community’s slightly manic quest to become the nation’s highest ranked school system. That quest led to the increased flow of money and, maybe not inevitably but sometimes it seems that way, an embezzlement scandal. Think Election, but with money instead of whatever exactly was going on in that one; plus the Jackman and Janney pairing you’ve been needing in your life without fully understanding what that gaping void was.

Okay let’s be honest, season two wasn’t quite sure where to go with this thing. It felt like a single season idea that became wildly and deservedly popular and then figured, why the hell not? And really, why the hell not? It’s still stylish as hell, still globe-trotting, still starring Sandra Oh and Jody Comer, who have still electric chemistry. And also there are still really quite good books in the series coming from Luke Jennings. So, basically, there’s my pitch. Sure I also wish Phoebe Waller-Bridge was still more directly involved, but that first season was magic and maybe season three will be too.

More streaming options to keep an eye on:

Defending Jacob (April 24) and Home Before Dark (Apple TV) (April 3): One, based on the William Landay novel, the other based on a true story about a kid reporter and small-town crime, both on Apple TV. And I mean maybe your experience is different, or maybe one of these shows will be the breakthrough, but I’ve never once had a conversation where anyone in the entire world asked me if I had seen a show that aired on Apple TV. Not once. It’s been around a few months, right? What are the odds? 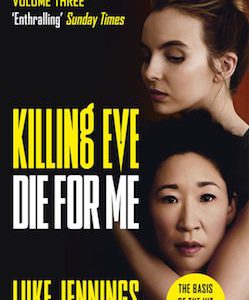 “I guess you should start calling me Oxana,” she says, a little regretfully. “I guess I should. I liked Villanelle.” “I...
© LitHub
Back to top