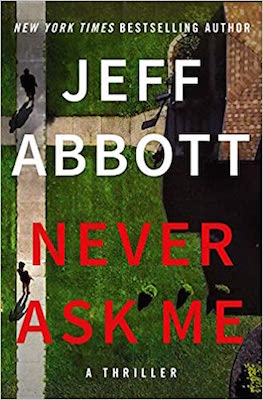 The following is an exclusive excerpt from Never Ask Me, by Jeff Abbott. In the quiet, wealthy suburb of Lakehaven, the body of a beloved community member, Danielle Roberts, is found on a park bench. No one grieves harder than the Pollitts, Danielle's neighbors, who thought of her as family. But the tight-knit Pollitts have their own secrets, and it's not long before they begin to suspect one another of perpetrating the horrible crime.

Iris Pollitt sits in her car, in her closed garage, hands on the wheel, thinking: Danielle is dead. Really dead.

And then she thinks: Good.

It’s the worst thought she’s ever had, a horror, unworthy, and she shoves the thought away. She wants to cry; she wants to vomit. Instead she takes several deep breaths and starts the car. Music plays, the nineties channel on satellite radio, or the “Mom Channel” as Julia calls it. Britney Spears is singing “ . . . Baby One More Time,” and Iris turns the volume down into silence.

Now she hears only the sound of her own ragged, gasping breath.

Go. Go there. Your kid needs you. Mom mode. Now.

She’s in such shock she’s forgotten to open the garage door, and she jabs the button, thinking herself lucky she didn’t rocket into the closed door. She waits for the door to power up and reverses up the driveway, fast. Going past the kitchen window, she sees Grant staring out in surprise, in curiosity.

She should have woken Kyle, made him come with her. She didn’t even think of that. She is moving through this morning as if she is in a dream and she needs to be awake.

Iris floors the Mercedes GLS. She doesn’t think about Danielle being dead—she can’t. She keeps that terrible thought at bay and instead retreats to thinking about her to-do list, which now won’t get done today: organizing the final fundraiser for the Lakehaven High Music Festival (featuring band, orchestra, and choir); drop- ping off donated supplies at the fundraiser for a less fortunate school on the other side of Austin (a project of Julia’s, both to do good and to bolster Julia’s résumé for college applications); then a meeting with the choir parents board tomorrow, where she’ll outline the spending for the school musical and the end-of-year senior chorister trip to Houston, where the kids will see a touring Broadway show and have a private session with the show’s understudies to learn about musical theater. It’s a lot; it’s a job where she doesn’t get paid, except that then her kids have better programs and her husband thinks she’s doing something worthwhile and not pining about her vanished career all day.

Thinking about her day as if it could still be normal doesn’t keep the horror at bay. Tears now in her eyes. Oh, Danielle. Why?

And my daughter found her.

Suddenly, in her mind, an old and precious memory: Danielle surprising her at the front door, with a smile: I got the email. They’ve matched a baby for you. A boy.

And Iris screaming in joy, and Danielle embracing her.

She blasts down Winding Creek Trail. Past one neighbor walking a pair of dogs, past a jogger. The houses are morning-quiet. All that quiet, that sense of security, is about to go away for a long time. She feels the world shift. She has to be ready for her family.

Article continues after advertisement
“We found her… we found her on the bench.”

Iris skids to a stop inside the park entrance. Ned kneels by the bench, sobbing, Julia embracing him from behind, still holding her phone. Two men she doesn’t recognize, but both dressed for jogging, are standing near them, watching. One has a phone pressed to his ear, speaking quietly. The other, a tall redhead, just stares, pale and unsure.

The enormity of it all slaps her in the chest, the stomach.

Iris stumbles out of her SUV, her hand at her mouth in horror, and runs toward them. “Julia!” she screams.

“Mom!” Julia looks like she’s seen the end of the world. “We found her… we found her on the bench.” Julia doesn’t let go of Ned, her face twisted, tears on her cheeks. “She was sitting here… She’s cold.”

“I tried to get him to move,” one of the joggers says quietly. “He won’t go.”

Iris forces herself to look at Danielle Roberts. The dead woman wears a dark wool coat, jeans, loafers, a dark-gray sweater. Expensive ring on her finger. A massive bruise discolors her throat; blood cakes her mouth, her chin.

“Iris?” the jogger on the phone calls to her. He knows who she is, of course; she isn’t sure of his name in the charge of emotions. She forces herself to flip through her mental catalog of contacts and remembers him. He’s Rachel Sifowicz’s husband. Matt. They have two kids, a senior in high school who plays football and an eighth-grade girl in band. Rachel had to cut back on volunteering when Matt was briefly unemployed after being laid off. Odd rambling thoughts fighting for footing in the slippery slope of her overwhelmed mind.

“I did. They’re on their way. I’m on the phone with the emergency operator. They said don’t touch anything.”

Ned found his own mother. Dead. Iris feels faint. She swallows down a tickle of bile. She forces herself to check Danielle’s wrist; she can’t bear to touch that discolored throat. No pulse.

“Yes,” she says. Mom mode. She has to get into mom mode. For both of them.

She looks at the other jogger, a brawny redhead. She doesn’t know his name. “Help me with him,” she says, and he nods.

“Ned,” she whispers. She puts her fingertips on his chin and turns his face

toward hers. She has known this boy since he was a toddler. His face is gaunt, his mouth quivering, brown eyes hollow with grief. His breath smells like mouthwash. His dark hair is under a cap. He looks at her like he no longer understands the world.

“Ned, come away.” She can hear the police sirens approaching; he hears them, too, and he shakes his head. Everything is about to change. He can’t let it, she sees; he cannot accept this new world.

“I know, I know. The police are here. Let them help her.” “Why would anyone hurt her?”

She sees a shadow start to pass over his face, as if he is asking himself the question and considering the answers, and then he presses his face into Iris’s shoulder. She begins to stand, and he resists, but then the redheaded jogger gently raises the boy to his feet, and Iris guides Ned toward the police car that has just pulled up. The weight of him against her shoulder is the weight of this new, awful reality.

She hears words being spoken—Matt, remaining calm; the officer, taking command of the scene; Julia brokenly starting to tell them what happened—but she focuses on Ned, on steering him away from the horror, on holding him up, on comforting him. Another police car arrives.

Ned shudders under her arm.

Iris looks back at Danielle, an empty shell on a cold bench.

She can never tell now.

Iris hugs the grieving boy closer to her.

"All Good Things Must Come to and End... Even War" 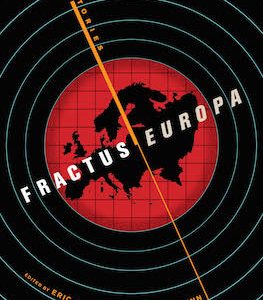 "All Good Things Must Come to and End... Even War" We come to miss the familiar. Children miss departed parents—despite years of abuse. Dog owners miss the mutt once it runs...
© LitHub
Back to top