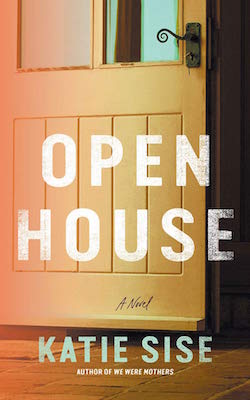 The following is an exclusive excerpt from Open House, by Katie Sise. Emma McCullough's disappearance from her quaint university has shocked the town, and her family, for ten years. Especially her sister Halley. But then a piece of evidence is finally found in the case. And a young woman is mysteriously attacked, linking the past and present more devastatingly than anyone can imagine.

The tapping was a compulsion Haley had developed to cope with the waves of sadness and obsessive thoughts about her sister, Emma. Haley mostly tapped her right index finger against her left hand and counted. Sometimes she tapped objects that felt interesting to touch—the edges of a staple, or the scratchy fabric on the old armchair where she studied, or Susie even. If she was in public, she tried to conceal her compulsions. If she was alone, she closed her eyes and soaked up the sensation of the tapping.

Haley had been doing it for nearly ten years, ever since her older sister vanished at age twenty-one, and it worked, actually. Every time fury swelled inside her, the tapping calmed her body until she could function again. Fury was the most succinct word to describe it, but it wasn’t only anger; it was a surge of regret, despair, and so many other things she didn’t dare name, followed by a quickening of her heart and a thick swirl of blood in her ears. It was where her body went every time she thought of Emma.

That morning as Haley tapped Susie’s shoulder—tap, tap, tap, one, two, three—her mind went to the clavicle and scapula that lay beneath, and she tried not to think about the things the young woman had done when she was alive, but she couldn’t always help it. Had Susie used this shoulder to pitch a ball? Haley guessed the odds were that yes, at some point she had, so she imagined Susie’s slight frame in a softball uniform, her skeleton of bones very much erect and alive, a sly smile playing on her lips as she considered her batter. Would she be wearing lipstick? No, no. Haley’s mind quickly canceled that out. But her hair: it would be in a ponytail, most likely. Haley could see it now, trailing over the delicate curve of her spine.

It wasn’t Susie lying there dead that had Haley so worked up that she needed to tap; it was the phone call she’d received on her way to her Saturday-morning anatomy lab. This has to be fake, this must be a prank, she thought as Detective Hank Rappaport introduced himself. After assuring her there hadn’t been any kind of emergency, he’d asked in a raspy voice, “Could you come down to the station later this afternoon, Ms. McCullough?”

“Of course,” she’d told him, because that was the only appropriate response to a question like that. And ever since his call she’d only been able to think of Emma, her body like a live wire as she wondered why a detective was calling her in.

Susie’s toes were painted, and she was pretty, too. Maybe it was wrong to notice her cadaver’s looks, but Haley felt Susie was different. Special, even. And not just because of how much she reminded Haley of her disappeared sister, but because Susie and Haley were both in their midtwenties and each had small

tattoos on their ankles. Haley sensed they’d be friends if Susie were alive, but maybe that was taking it too far. She was just so on edge lately. People had warned Haley medical school would do this to her. Every day after classes she raced down the University of Yarrow’s halls, dying to get to a bathroom so she could scrub her hands, her dry, red fingers never feeling clean enough.

“Observe the aortic arch,” their anatomy teacher, Dr. Brad Aarons, was saying, his voice echoing through the lab. (Call me Brad, he’d told them all at the start of the semester, and they did.) Twenty cadavers lay on stainless steel tables across the room, and the overhead lights were as bright as any operating room. They’d already sawed through the sternum and cracked open the rib cage, and now they were following the ascending aorta as it became the aortic arch and looped over the heart to become the descending aorta.

That first day in anatomy when Haley had been assigned to cadaver station number four, she gasped when she pulled the sheet from the body and saw the resemblance to Emma: perfectly pale skin, high cheekbones, long lashes, and a top lip with a deep cupid’s bow. She’d glanced up at Brad and raised her hand as if to protest the match, but then lowered it, feeling utterly ridiculous. What would she even say? She renamed cadaver #347 Susie to humanize her, and as the first weeks of the semester wore on, there was this part of Haley—and she knew how damaged she was to even be thinking this way—that relished the similarities. She looked for her sister everywhere. Why not here, too?

“Identify each branch,” Brad went on, changing the picture on the screen so that it showed a simulation of a gorgeous, pulsing heart. Haley loved the human body; she always had. She cut around the bra- chiocephalic artery, carefully moving aside tissue to expose its course, losing herself in the dissection. She didn’t look up again until Brad said, “Eyes here for a moment,” and changed the slide to an illustration of the heart, the veins and arteries curving in bright reds and blues.

Brad Aarons was a cardiothoracic surgeon at the end of his fellowship at Waverly Memorial Hospital. He was somewhere in his late thirties, and half the female students fawned over him, but Haley had no interest in that. He’d been teaching at the University of Yarrow ever since he graduated from its medical school, and Haley didn’t know much else about him except that he was married to a woman named Priya, who’d once been a successful artist. “Note the way the brachiocephalic artery splits into the right subclavian artery and the right common carotid artery,” Brad was saying. His messy red-blond hair was an inch too long and a shade lighter than the stubble blanketing his face, but even doctors could get away with a mussed look in a town like Waverly, because here they valued ideas, academia, and compost piles. Maybe it was because of the university hovering on the wooded outskirts, but Waverly didn’t preoccupy itself with the kinds of things most wealthy New York City commuter towns did, and Haley wasn’t sure whether that made it better or worse. Elitism was still elitism, even when you packaged it as being smart and noble.

As Haley moved on to the right subclavian artery, she thought about how much her sister would have hated this class. Emma would have barfed at least a dozen times by now. She probably wouldn’t have even liked to know the cadavers existed on Yarrow’s campus when she went to school here. But even though there wasn’t a scientific bone in Emma’s body and she never would have taken one of Brad’s classes, Haley was sure Brad knew exactly who Emma was, and who she was, too: the sister of the undergrad who went missing. Everyone knew. Haley remembered the way Brad’s eyebrows lifted when he read her name aloud the first day in class, and the way he’d taken off his black reading glasses to glance up and see her face, searching it for similarities. She knew he’d found the similarities when his eyes widened, and part of her enjoyed it. Emma’s sister: if she was anything, it was that. Brad had tried to cover up the awkwardness by quickly resuming his roll call, barking out names, taking a few moments to get back on track. He’d been weird with her ever since, but that was nothing new. So many people were.

Emma went missing her junior year at Yarrow, when Haley was a sophomore at Waverly High School. There was no official explanation for her disappearance. The police had closed the case after investigating for months, interviewing everyone who was at the party that night in the woods with Emma, and sweeping the river—Never a guarantee to find a body that way, they kept reminding Haley and her parents. They never did find Emma’s body, and they were convinced, just like most people in Waverly, that Emma had flung herself into the river from the cliffs behind Yarrow, where she’d last been seen.

But Haley knew in her bones that that was impossible. Emma had her dark side, but she wasn’t suicidal. Haley believed Emma had been killed and that the police were too naive to figure it out, and once she

realized her theories were falling on deaf ears in Waverly—including at the police department—she had to get out of there. She chose Stanford for college, far away from the dark and cold East Coast that had claimed her sister, and a plane flight from the parents who were trying so hard to keep it all together. At the airport Haley’s parents warned her over and over to stay safe, but their warnings were hollow. Emma’s disappearance made it too obvious that they didn’t have control over anything.

It didn’t take long for Haley to realize that California had been a mistake. She missed her parents and felt too removed from Waverly and where she’d lost Emma. Some magical-thinking part of her was certain she was the only one who could get to the bottom of her sister’s disappearance, so after undergrad, Haley moved back east, to New York City, to be closer to her parents. That’s where she met Dean, her fiancé, the only person besides her mother who’d ever believed her theories that her sister had been killed by someone else who was at the party that night. Her own father was convinced Emma might have just run away or been taken alive, and even Haley’s friends at Stanford had nodded along when she got drunk enough to talk about Emma, clearly feeling very sorry for her, but also seeming not to believe her. You’re too close to see things clearly, one of her roommates had said late one night, and Haley wondered if she just didn’t have the right language. Disappeared, missing, dead: words Haley used interchangeably about what could have happened to her sister that night, the truth existing somewhere in the dark spaces between them.

Dean had supported Haley when she accepted an offer from Yarrow’s medical school, and now here they were, back in Waverly where it had all started. Haley knew it was crazy. To want to live in the town she’d grown up in, where her parents still lived, and to walk the campus where they’d experienced their worst nightmare. To fall in love with Dean, who’d also attended Yarrow. But her grief was like a part of her body now, and she felt a visceral need to stay connected to her roots and her pain, and to her sister.

Haley looked down at the slim platinum ring she could just make out beneath her rubber gloves. An engagement. Dean had proposed a few months ago, and Haley knew something needed to change if she was supposed to start a new family. Because how could she move forward when the person she loved could be stuck, buried somewhere underground, her disappearance still a mystery?

When "Normal" People Snap: The Unnervingly Universal Potential for Violence 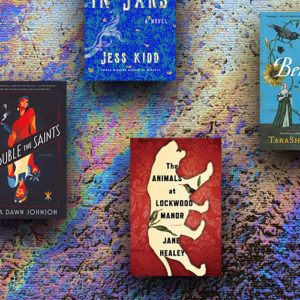 The Best Historical Fiction of 2020 In a year like 2020, it's no wonder that people have been turning to both historical fiction and genre fiction in record...
© LitHub
Back to top