The following is an exclusive excerpt from Outside the Lines, by Ameera Patel. In Johannesburg, Cathleen, a drug addict, winds up kidnapped and her family doesn't notice, while Zilindile and Farhana, a couple with two very different cultural and religious backgrounds try to make their relationship work. Runyararo was painting Cathleen family's house but he was fired, since Cathleen's father believed he stole from them. And Flora, a domestic worker, tries to stand by the man she loves.

The policemen have made themselves at home. They’re relaxing on the couch in front of the empty space where the TV used to be. The fatter one is on Jennifer’s side. They are not the same policemen that came previously. Perhaps all the police pairings have a Laurel and Hardy feel to them.

Frank has Cathleen’s photograph in his hands. It’s the most recent one that he could find but her face has become much more drawn since it was taken. She was happy in this picture. It’s from the night of her matric dance. Her hair was shiny and curled into spirals pinned on top of her head. It was the first time Frank had seen her looking like a woman. He didn’t want her to go out that night, scared that his baby would disappear. Jennifer had to convince him to let her go with that pimple-faced idiot date of hers. The boy smiled like a cat; Frank didn’t trust him.

There was a time when he drove her everywhere. If she came home now, he would do it again. He wouldn’t let her leave his side.

What if she’s been attacked? When she was scared as a little girl, she would attach herself to his leg until he picked her up. Jennifer said he babied her too much. He should’ve taught her to defend herself.

“Who was the last person your daughter was with?” Frank shakes his head. “Did you phone her friends? Children of this age are usually at someone else’s house.”

Frank doesn’t know any of Cathleen’s friends anymore. He’s not sure if she has any.

He looks at Flora. She is standing next to the window, staring out at her room.

He met that girl at the bar, who went to school with Cathleen. What was her name? He could go back and try to find her. But she didn’t know that Cathleen had dropped out of university. They seemed to have lost touch.

“Do you know any of Cathleen’s friends? Does she bring anyone home during the day? Have you seen a car drop her off?”

“No. When she is here, she is always alone.”

What is wrong with Flora? It’s like she couldn’t be bothered to help. What’s the point of her being here with the children all day if she’s not going to look after them? Doesn’t she know anything?

“Where does your daughter go out to?”

“Parties, clubs…I don’t know.” One of the policemen raises an eye- brow as he makes notes.

It’s normal for young people to go out. Cathleen gets frustrated if he asks too many questions. She says she doesn’t need an interrogation. He can’t keep her captive in the house.

“How does she get around? Does she have a car?”

“She doesn’t have a license. There is a second car. Flora’s son was teaching her to drive but she lost interest. He drives it at the moment.” The policemen start to talk to Flora in Zulu. Why won’t they speak English? Are they discussing his parenting? Are they even talking about Cathleen?

Both policemen stand up and follow Flora into the dining room. He walks to the kitchen and gets himself a glass of water. He really wants a beer. Flora looks at him and moves past him to get two glasses of water for the policemen who are now sitting at the dining room table. No one has sat at the table in ages.

Why is Flora treating them like they’re visitors? They’re here to do their job.

Frank doesn’t know the answers to any of their questions. Flora is as useless. Why doesn’t she know? Part of her job is to make sure that the children are taken care of. This is ridiculous.

He stares at Flora and the two policemen. They are talking with smiles on their faces. Do they not realize the severity of the situation? They need to start looking now.

“Flora, where is that phone I gave you to charge?” If the phone belonged to one of Cathleen’s friends they might be able to find a clue.

He rests against the wall facing the two officers. The fatter one yawns and stretches, revealing sweat-stained armpits on his uniform. The other one stares blankly at Frank.

“Okay, gentlemen. What’s the next step? What do we do now?”

“We’ll put the word out, sir. Sounds like a runaway. You will probably find her on your doorstep before we do.”

That’s it? They’re not going to investigate?!

He walks the policemen out and drives to the bar in Parkhurst where he met that girl. Cathleen might be there. He should check all the bars in the area. She could have a boyfriend. Maybe she’s been sleeping at her boyfriend’s house as some form of rebellion.

The bar looks different now that he’s sober. He is the oldest person there. A different group of girls is sitting at the table they were at the last time. They look about Cathleen’s age. He walks toward them.

The girl closest to him rolls her eyes as he approaches. “We’re not interested buddy, move along.” She swings her ponytail over her shoulder and laughs with her friends.

“You’re too old for us, okay! We’re not interested in sugar daddies.” A cackle of laughter erupts from the table.

“I’m looking for my fucking daughter! Her name is Cathleen. Do you know her?”

They’re silent. The rest of the tables turn to stare at him. The bartender looks ready to call security. The girl with the ponytail shakes her head.

There’s a chance that the girl from the other night could still come. He orders a beer and sits at a stool facing the entrance.

Is Sydney Australia's Capital of Noir? 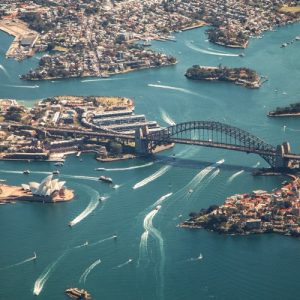 Is Sydney Australia's Capital of Noir? Sydney—capital of New South Wales, the biggest city in Australia with five million Sydneysiders. It’s the country’s...
© LitHub
Back to top