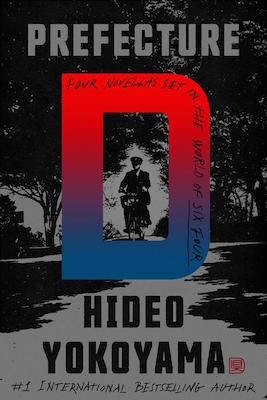 The following is an exclusive excerpt from Prefecture D, by Hideo Yokoyama. In this collection of four thrilling stories, four different officers must solve four impossible mysteries.

If memory served, Toshie was around ten years Tomoko’s senior, which would put her in her early fifties. She had no children. Her husband, an officer from Mobile Investigations, had died in the line of duty, stabbed while investigating a break-in during the summer twelve years ago. Toshie had since, by way of an introduction from Administration, devoted herself to her role as caretaker of the female officers’ dorm.

It was this history that caused Tomoko’s heart to ache every time she set eyes on the woman. She, too, had been married to an officer. Despite a bright future in Security, he had passed away three years earlier. He hadn’t died in the line of duty, not specifically. But Tomoko could not help wondering, every now and then, whether lie hadn’t suffered something close to karoshi, the now-infamous death from overwork.

Toshie led her to the canteen, where vegetables for the evening meal were already laid out in neat groups on the tables.

“She left without breakfast this morning.”

“Sorry, I’m not hungry,” Mizuho had said before she left. That had been at 7:30. It was the time she usually left for work. She’d been wearing a cream dress. It was one of a few she generally wore for her commute. She’d had a little makeup on, but nothing drastic. The only thing that was slightly different, according to Toshie, was that she’d seemed a little down.

“How about the night before?”

“She was late back. I mean, she gets these early and late

calls for work, so that’s not necessarily anything to. . . ”

Whenever a serious crime took place within the prefecture, Mobile Forensics would be called to the scene. Their job was to collect footprints, fingerprints, and all other trace forms of evidence. Mizuho would join her team in the minivan as it raced to its destination. Drawing likenesses was only a side job.

Toshie went on to say that Mizuho had not arrived back until after the ten o’clock curfew. She’d called into the caretaker’s office from the corridor, apologized for being late, and said good night. She’d been out of sight by the time Toshie had emerged from the room; she’d heard only the sound of her footsteps in the stairwell. They’d seemed to lack their usual vitality, and Toshie remembered thinking that Mizuho must be tired.

Toshie was claiming that Mizuho had been out of sorts, but that was strange. Mizuho load been celebrating her triumph with a childlike glee during lunch that day. Tomoko had witnessed the girl’s wide-eyed joy in person. Had something happened after that? Something to cut short her celebratory mood prior to her return to the dorm at ten?

Something to nullify her excitement? An overwhelming shock of some kind?

It was the first thing to come to mind.

“Do you know if she’s seeing anyone?”

“Seeing anyone? Oh, I don’t think so. She’s as strait-

laced as they come. No, I’m pretty sure she isn’t.”

Tomoko recoiled at the defensive tone. She noted a sense of envy in herself, too, for Toshie’s closeness to Mizuho. While Tomoko knew that Toshie did not doubt the girl’s virtue, either, her display of motherly affection forced Tomoko to accept that Toshie was now acting in her capacity as a managing officer. Perhaps that had been the woman’s intention. \Ve’ve hoth lost husbands in the force. But you’ve still got your son. Let me at least have the girls. This plea was something that was always there in her eyes.

The grandfather clock in the canteen began to chime.

Four hours had passed since Mizuho had left the dorm. Given the time and the fact that they’d yet to hear anything, it seemed safe to dismiss the idea of a traffic accident. And while she couldn’t yet dismiss the possibility of a crime having taken place, Tomoko’s conversation with Toshie had served to greatly alleviate her fears regarding the bike gang. If Mizuho had been out of sorts since the previous night, it seemed likely that her going missing was related to whatever it was that had altered her mood.

The word caught Tomoko off guard. Missing, not absent. Perhaps it was appropriate. Who was to say it wouldn’t continue beyond today? That the situation would change tomorrow, or the day after? Surely she had to consider the possibility.

The word caught Tomoko off guard. Missing, not absent.

Tomoko got to her feet. “Can I see her room?”

Toshie nodded and began to walk toward her office. She stopped suddenly, as if she’d just remembered something. She riffled through her apron and pulled out a key with a sticker marked “Room 6.”

“Yes. I thought she might have left a note, but I didn’t see anything.”

A note, maybe on her desk, examining the absence.

Tomoko had entertained that hope, too, and was discouraged to learn that no such thing existed. Still, there might be other clues. She should at least check.

She made for the stairs; she knew her way around. She made sure to be present whenever someone was moving in or out, and she made frequent rounds to lend an ear to the concerns of the younger officers. Still, she was never sure whether it made a difference. Mizuho had disappeared without so much as a word. And Tomoko, for her part, was unable to come up with a single theory as to why.

There were two names on the door: Mizuho Hirano and Junko Hayashi. Tomoko turned the key. The air shifted when she opened the door, causing something to tickle her nose.

Anyone else might have missed it. The scent was faint but clearly identifiable. Tomoko hacl a natural aversion to the stuff. The unexpected olfactory greeting caused her to hesitate. Not once had she detected even a whiff of perfume on either Mizuho or her roommate—not on them, and certainly not in their room.

Mizuho’s bedroom was located to the right of a common space that contained the bath, toilet, and other facilities. The door was unlocked. Tomoko’s heart pounded as she pushed it open. The scent grew stronger. It was Mizuho’s. The small bottle sat on what looked like a kid’s dresser.

Chanel No. 19. Not one to use perfume herself, Tomoko had only a limited knowledge of such things. Yet even she knew that this particular brand was one men liked to give as a present to women.

Tomoko let out a deep sigh before scanning the remainder of the room in an attempt to calm herself down. A collection of faces decorated one of the walls. The drawings were of actors, celebrities, news anchors, comedians, and various other TV personalities and were arranged in neat rows. Tomoko had had to catch her breath the first time she’d set eyes on the collection. Mizuho had been working hard. Really hard.

A likeness was a drawing of a suspect based on information provided by victims and witnesses to a crime. Deemed to be greater in accuracy than the photo composites used before them, likenesses had been fully integrated into the investigative tool set of every station in the country. Mizuho was the third female officer in the prefecture to have taken on the role of drawing them. Seeing in her greater potential than in her predecessors, Forensics had taken an active role in developing her abilities. They had placed her under the tutelage of a well-known painter and paid for her to attend the municipal art school twice a week.

Their investment had paid off.

The likeness she had drawn of the gang leader had proved astoundingly accurate. She had justified the expectations of her department and raised her standing in the force as a whole. Tomoko had been proud. An officer under

her guard had committed herself to working toward a goal and been rewarded for her effort.

The pictures on the wall. The little bottle on the dresser. Which, Tomoko wondered, was the better reflection of what Mizuho wanted now?

Tomoko caught Toshie on leer way out. “Was she wearing perfume when she left?”

“Perfume? Not that I noticed. She doesn’t really like that sort of thing, you know,” Toshie said, nudging her head out of her room, defensive again, smelling ever so slightly of perfume herself.

Tomoko set off for the Prefectural HQ.

Junko would be at her desk in Traffic Planning. As Mizuho’s roommate, she would have more information. About the perfume. And about the man.

A short pause at the light was enough for Tomoko to find a question. Mizuho had left in her usual commuting attire. She’d had some makeup on, but nothing out of the ordinary. Why, then, bother with perfume? Mizuho was of course smart enough not to wear anything that would grab attention even if she had been on her way to meet someone. And if the relationship was sufficiently advanced, there would be no need to dress up anyway.

Tomoko pressed down on the accelerator. It was already after twelve. The movement of the clock marked the gradual transition of Mizuho’s status from absent to missing. 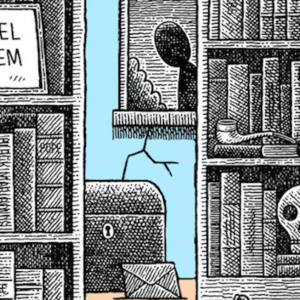 The tortuous literary puzzle Cain's Jawbone has been solved for the first time since 1934 In 1934, Edward Powys Mathers, the crossword puzzle creator at Britain's popular newspaper The Observer, created his masterpiece:...
© LitHub
Back to top