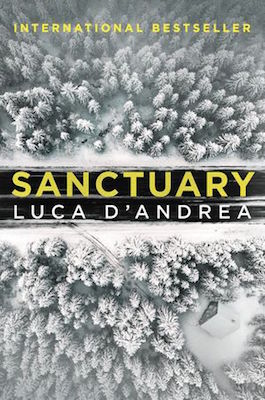 The following is an exclusive excerpt from Sanctuary, by Luca D’Andrea. Marlene Wegener, the wife of an infamous German crime boss, has had enough of her husband’s treachery, and leaves him, absconding with millions of lire’s worth of sapphires. Furious, her husband sends an assassin known as The Trusted Man after her. But things change when the syndicate finds out she’s pregnant—and Herr Wegener wants his child is returned to him, alive.

Two light knocks and these words: Nibble, nibble, little mouse! Who is nibbling at my house?

Marlene, twenty-two years old, one metre sixty, maybe a little more, eyes a melancholy blue, a beauty spot at the edge of her smile, undoubtedly beautiful and undoubtedly scared, looked at her reflection in the steel of the safe and felt stupid. Metal, not gingerbread like in the fairy tale. And not a witch in sight.

It’s only fear, she told herself, that’s all it is.

She relaxed her shoulders, held her breath the way her father did before he squeezed the trigger of his rifle, emptied her lungs and focused again. There were no such things as witches. The fairy tales lied. Only life mattered, and Marlene was about to change hers for ever.

The combination was easy to remember. One. Three. Two. Then four. A flick of the wrist, then another four. Done. So simple that Marlene’s hands moved as if automatically. She took hold of the steel handle, pulled it down and gritted her teeth.

Wads of banknotes stacked up like firewood for the Stube. A pistol, a box of ammunition and a velvet pouch. Under the box was a notebook worth more than all that money multiplied a hundred-fold. There was blood, and maybe also a couple of life sentences, preserved within its crumpled pages: an endless list of creditors and debtors, friends and friends of friends, all in Herr Wegener’s small, wiry, slanting hand. Marlene didn’t give it a second glance. She didn’t care about the pistol, the box of ammunition or the bundles of banknotes. The velvet pouch, though, made her hands sweat. She knew what it contained, knew its power, and was terrified of it.

Hers was not a simple theft.

Let’s not mince our words. The name for what the young woman was doing, with her heart in her mouth, was treason. Marlene Wegener, née Taufer, lawful wedded wife of Robert Wegener, the man they all doffed their hats to, a man with a forty-year career of contraband, intimidation, violence and murder. No one messed with a man like Wegener. No one even dared call him by his first name. To everybody, Robert Wegener was Herr Wegener.

Even to her. To Marlene. His wife.

Get a move on, time’s flying.

And yet, perhaps because the ticking of the clock was turning anxiety to panic from one tick to the next, when Marlene opened the velvet case, the fairy tale once again prevailed over reality and her eyes met the deep, terrible, dark-blue eyes of tiny, angular creatures.

It even struck her as obvious. Kobolds loved metal, cold and death: the safe, the pistol, the money, the notebook.

The kobolds reacted fiercely against the intrusion. They drained the room of light, trapped Marlene in their cruel little eyes, and turned her into such a savage essence of hatred that the pouch almost slipped from her fingers.

That brought her back to the present, to the wide-open safe, the villa on the River Passer.

In other words, to reality.

The velvet pouch was filled with sapphires. Pressed carbon which, through a trick of physics, has learned to sparkle like a star. Herr Wegener’s entire fortune—or near enough—clutched in her hand. But no witch and no kobolds. Because, Marlene told herself again, there were no such things as witches or kobolds, whereas these precious stones were not only real, they were the key to her new life. As long as she stopped wasting time and got out of here.

Without giving the world of fairy tales another thought, and without even considering the consequences of what she had just set in motion, Marlene tied the pouch, hid it in the inside pocket of her padded jacket, locked the safe, put the painting back to hide it, straightened up, flicked back a strand of hair that was about to fall into her eyes and left the bedroom.

She walked along the corridor, down one flight of stairs, across the living room, through the hall with its excess of mirrors and down the outside steps. The night greeted her with a light northerly wind.

She did not stop.

She got into the grey Fiat 130 and drove away. The villa disappearing in the rearview mirror. The passing street lamps. The gold wedding ring thrown out of the window without a trace of regret. The sleeping town. The scrapyard. A brief halt and, thanks to an envelope stuffed with money, the Fiat 130 became a cream Mercedes W114 with new number plates, papers all in order, brand-new tyres and a full tank.

Then, without so much as a farewell thought, she was off again, heading west.

Apart from the first snowflakes, everything was going according to plan. At least until the roadblock a few kilometres from Mals. A real pain in the neck.

At the end of a series of bends she had just started along, Marlene glimpsed a van, its rotating beacon switched off, and a couple of carabinieri who looked as if they were freezing to death. Or falling asleep. Or maybe slyly waiting for someone or something.

Herr Wegener had eyes and ears everywhere. Even among officers of the law.

So: Should she try her luck or change route?

The back road led her to another, even narrower, winding one, which went through a sleeping village and brought her to a cross- roads (left or right? heads or tails?), then further on, with the snow piling up around her, layer upon layer.

And when the car started to skid, the young woman with the beauty spot at the edge of her smile decided to carry on anyway, with one eye on the road, which kept climbing, and one on the map—on which, needless to say, this stretch wasn’t marked. Damn them and their useless maps!

The map may not have been precise—none of them were. But inaccurate? It was 1974, and by 1974 man had already left his prints in the dust of the moon, so a map could hardly be inaccurate. Marlene should have just pulled over, switched on the light inside the car, taken a couple of deep breaths and checked. Things would have turned out differently.

But Marlene did not stop.

Her anxiety was now compounded by the incredulous realisation that she was well and truly lost.

Step on it, but gently, she told herself. Keep going. The road will

take you somewhere sooner or later. A village, a shelter, a lay-by. She would even have been happy if the road had widened enough to let her do a U-turn, drive back the way she had come, and brave the checkpoint: anything, just to put a stop to this new, remorseless sequence of events and take back control of her own fate.

It was not to be.

Maybe it was the snow, maybe she couldn’t take her eyes off the map, but suddenly Marlene felt the Mercedes lose traction, swerve abruptly to the left, spin around and . . . take off.

It was terrifying: the headlights sweeping the blackness, the swirls of dark snow, the gaping precipice, the tree trunks, motionless and in perfect focus.

The impact was violent, the explosion of pain stifled by the screech of ripped metal. Yes, this time it really was an infernal lament, all too similar to the creaking of the witch’s door.

Marlene cried out the name of God. And as the black, nameless mountain loomed over her, her cry turned into a gasp. The last thing she invoked, though, was love. Love, which had driven her to betray the most dangerous man she’d ever met. Love, which had a name.

Marlene’s last word before the darkness. 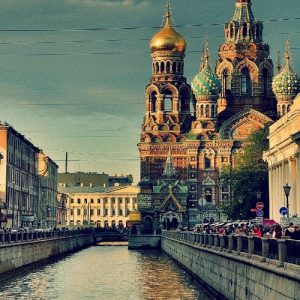 Saint Petersburg: City of Revolution...and Crime Fiction A city that has changed its name so many times has to be interesting. Originally named for Peter the Great, after 1914 and the outbreak...
© LitHub
Back to top