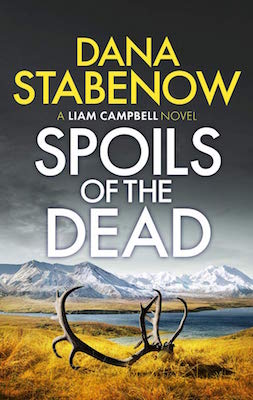 The following is an exclusive excerpt from Spoils of the Dead, by Dana Stabenow. Following a tragic accident, Alaskan Trooper Liam Campbell has been demoted and relocated from Anchorage to Newenham, an isolated, freezing, tiny town that is surprisingly full of trouble. When an archaeologist (on the brink of a huge discovery), is found dead, Campbell knows it's time to do what he does best.

“Come on, Erik!” Josh’s sneakers disappeared over a mussel-encrusted rock ridge left exposed by the low tide. His voice echoed behind him. “We have to get there and back again before the tide turns!”

Like Erik didn’t know that. He pulled himself up the ridge, puffing, and saw Josh’s tracks in the dark sand, the strides long, the toes dug in. He was running.

Bastard. Erik savored the forbidden word in his mind and even thought about saying it out loud. No one was around to hear, or wash out his mouth with soap, or spank him, or send him to bed without his supper. Which his mother lost no opportunity to do because she thought he was too fat.

Instead, with a heavy sigh, he hoisted himself up over the ridge of rocks covered in barnacles, mussels, and kelp, and slid down the other side to land in the damp black sand on his backside. The edge of a mussel shell had caught his finger.

The wound was bleeding sluggishly, dripping down from his hand. He knew better than to say anything, but he heard Josh laughing, and looked up to see the other boy vanish around the next ridge of rock, his excited voice lingering after him. “Wait till you see, Erik! It is the coolest thing ever!”

It was low tide on an already broad, gently sloping beach that was half sand and half mud, with a narrow section of tumbled gravel between sand and goose grass. The beach stretched down to a glassy calm of sun-washed blue. This side of the bay was backed by two bluffs, one at water’s edge and another miles inland. Both were made of glacial silt that had spent epochs washing down Cook Inlet to pack down and pile up, interrupted by seams of black coal. On the other side of the Bay the bright teeth of the mountains gnawed at the lighter blue of the sky. Behind them the summer sun was setting somewhere behind Redoubt, turning the sky toward the pale twilight that passed for night during summer in Alaska. The tide was about to turn and the mud bloomed with a thousand spurts of water, the razor clams digging in beneath the incoming edge of the water. The salt air stung his nostrils and Erik drank it in with every labored breath, watching the shadows lengthen and the light fade. Even at the age of ten he understood that he lived in a beautiful place, and was grateful for it.

Josh’s scream jerked him around in a circle and yanked him into motion up the beach without volition or thought.

Erik had never heard Josh’s voice sound like that, a high, thin edge of fear that knifed right through him.

There was the sound of a thunk, exactly like a cleaver coming down on a roast when they butchered out their yearly moose, and Josh was cut off in mid scream.

“I’m coming, Josh! I’m coming!” He tried to run faster but the sand gave way beneath his feet and it was like postholing through deep snow. He rounded the outcropping of black rock, gasping, his chest heaving, his heart pounding so loudly in his ears he couldn’t hear anything else but it. “Josh! Josh! Josh—”

There was movement to his left from behind the outcropping and as he started to turn his head to see what it was there was another thud and a kind of explosion of white light followed by a feeling of falling down a deep, dark hole, down, down, down… 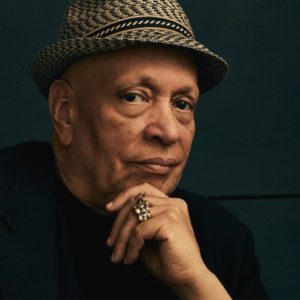 My First Thriller: Walter Mosley There is no one to whom a blue dress has meant more to his career than author Walter Mosley, with the possible exception...
© LitHub
Back to top