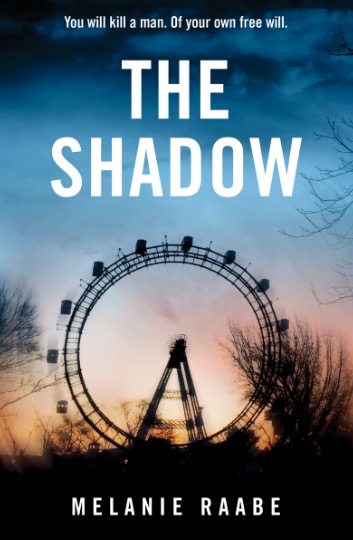 The following is an exclusive excerpt from The Shadow, by Melanie Raabe. (Translated by Imogen Taylor.) Norah has moved to Vienna with hope for a fresh start, but is terrified when a woman approaches her and tells her that on February 11th, she will kill a man named Arthur Grimm.

Vienna was giving Norah the cold shoulder. When she’d visited with Alex in the summer, she’d been enchanted; it had seemed to her a city with a mind of its own, unlike anywhere she’d been before. That felt like light years ago.

Everything seemed so bleak—a Munchian vision of a city; a dark, urban forest, warped and menacing. The gloom pervaded Norah’s empty at and the dingy streets. Passers-by stared grimly at their phones; melancholy coated everything like a film of grease. And it was fucking freezing.

Norah bought an Austrian paper, a German paper and a packet of cigarettes in the newsagent’s across the road, and sat down with them in the corner bistro. By the time she took her first sip of coffee, the shock of memory aroused in her by Theresa had subsided a little, and she could turn her mind to the day ahead.

Although Norah’s job wouldn’t officially begin for two weeks, her new boss had asked her to go and meet him that morning. They’d talked at length on the phone, but this would be their first real meeting,

and Norah was looking forward to it; she couldn’t wait to get back to work, even if she was a little nervous. She knew she was a good journalist; she’d won prizes for some of her features, and there had even been attempts to headhunt her. But all that had been before what she secretly thought of as the disaster. Coming after that, the job offer from Vienna had seemed too good to be true; she was almost afraid it would turn out to be a cruel joke.

Mira Singh, the publisher, had rung her in person. Norah’s feature on women soldiers in Afghanistan had caught her interest; she’d gone on to read all Norah’s latest work and been impressed by her keen eye and her choice of topics. Mira was involved in setting up a new weekly magazine in Vienna and wanted Norah on board. The idea, she explained, was to forget about trying to keep up with the internet and publish an old-school high-quality magazine headed by an out- standing team of editors and filled with well-researched articles by prestigious writers.

It sounded perfect to Norah. Where was the catch? Did Mira realise Norah was lumbered with a lawsuit? Mira only said that she’d read the article in question. She was looking for a woman with attitude and thought she’d found one in Norah. Not wanting to sound overeager, Norah had asked for a day to think it over. Then she’d accepted. What else could she have done?

And here she was.

The magazine offices were in the touristy part of town, not far from St Stephen’s Cathedral, on one of those big shopping streets lined with fast-food outlets and clothing chains that sell more or less the same things the world over. Norah knew the area from one of her previous visits to Vienna; it was packed from early till late with tourists and those who lived off them. There were tour groups on their way to the cathedral, con artists, buskers, teenagers taking selfies on their phones, and here and there an exasperated local who actually wanted to get somewhere. And there were beggars and homeless people, their calls echoing through the streets like the cries of ghosts. The living shuddered at their voices, but pretended not to hear them.

Some years ago, Norah had wanted to write a feature on homeless minors, but hadn’t been able to persuade her boss. Maybe it was time to give it another go. She lit a cigarette and walked down the street, thinking hard. Her tongue probed a molar that was throbbing dully, as if the tooth couldn’t make up its mind whether or not to ache properly. That was the last thing she needed. She wanted to go to the shops that evening, not the dentist.

Outside H&M, a nondescript girl was sitting cuddled up to an Alsatian with a sign in front of her. I’m hungry. Early twenties at most, reddish-brown hair under a black beanie, military parka, chewed fingernails. Next came a man of sixty-odd with finely drawn features behind a pair of glasses, and then a guy with blond dreads—presumably the local psycho—who sat there, mumbling away to himself and scrounging off the passers-by, occasionally turning on a passing woman and hurling obscene abuse at her with astonishing inventive- ness and persistence.

Then Norah saw the woman—an elderly woman, with striking wrinkles and clear, bright blue eyes. The kind of face that won photographers prizes, if they were lucky enough to spot it in a remote mountain village.

She wasn’t sitting or kneeling on the ground like the other beggars, nor was she at the edge of the street. She was standing right in the middle of the pedestrian precinct with a small brass dish in her hand, apparently unfazed by the milling crowd. It was incredible. This woman—a good six foot, Norah guessed—stood in everybody’s way, and yet nobody bumped into her; the bustle of the city washed over her like water lapping a river island. Now and then a couple of coins chinked in the dish, but she didn’t say thank you, she just stood there motionless—upright and forbidding in the steady ow of people. A rock, a black tower. Only her eyes moved. Norah wondered what story she had to tell.

Sebastian Berger, Norah’s new boss, was a tall, strongly built man in his fifties, with still-dark hair combed back off his face. He was wearing jeans and a tweed jacket that made him look rather donnish. What really struck Norah, though, was his expression. It said, You are not the way I imagined you. But she was used to that. With her ne- featured face and petite figure, she was regularly mistaken for the rookie, even now, in her mid-thirties. When she’d had photos taken for the various web portals where her writer’s pro le was posted— photos that Sebastian Berger had presumably seen—she’d deliberately worn dark clothes and a serious expression, and then chosen the pictures that made her look the most grown-up. In real life, of course, such tricks were no use to her, and she’d realised early in her career that if she wanted to be respected, she had to be tougher than most, and work harder. Berger, to his credit, soon regained his stride. He offered Norah coffee and they resumed the conversation they’d begun on the phone about potential topics for articles. When Norah took the lift down two hours later, her mind was whirling with ideas. It felt good to be going back to work.

Outside, it had warmed up a little. Norah had planned to go and get Austrian number plates for her car and, if that didn’t take all day, to look for some furniture afterwards. She unbuttoned the grey winter coat she was wearing over a black woollen dress. It was mild, almost springlike; the sun shone in a deep blue sky. All was brightness in this city. No shadows anywhere. She paused for a moment to watch the crowds of people ploughing their way down the pedestrian precinct, lured out by the glorious weather.

Norah soaked it all in: shoppers, tourists, police, neon signs, pigeons, cigarette ends, paper cups, the smell of deep-frying, the clatter of heels. A man touting roses, the distant clip-clop of hoofs from the tourist carriages, fountains, balloon-sellers, ice-cream cones and popcorn, smartphone zombies and con artists. She could feel herself being swallowed up and tried to get along more quickly, but it was useless; an enormous tour group even pushed her back a little. Norah abandoned all politeness and began to elbow her way through, holding the bag with the vehicle papers close to her body. She dodged a rickshaw cyclist who, for reasons best known to himself, seemed to think it a good idea to chauffeur his passengers through this mayhem. Then she realised that her phone was ringing. She shed it out of her bag and gave a start when she saw the screen. Alex. They hadn’t spoken since Norah had moved out—she’d stayed in a hotel for a few weeks before coming to Vienna, and neither of them had made any attempt to get in touch. Norah stared at the screen, feeling cold. Should she pick up or wait for her voicemail to kick in? Then it was too late; Alex had given up. Norah slid her phone into her coat pocket and raised her eyes.

The old woman she had seen begging earlier was standing right in front of her, so tall that Norah had to look up at her. She reached into her bag and pulled out her wallet to put a few euros in her dish.

‘You bring death,’ the woman said, her husky voice calm.

Norah frowned. ‘What did you say?’

The woman seemed not to hear.

Her grave stare was still fixed on Norah. Her hair was darker, her eyes brighter and her wrinkles deeper than Norah had realised. The pale turquoise of her irises was flecked with specks of red, like the tiny particles of blood in the yolk of an egg.

It suddenly occurred to Norah that the woman was mentally ill.

‘On February 11 you will kill a man called Arthur Grimm in the Prater,’ the woman continued. ‘With good reason. And of your own free will.’

Norah didn’t know what to say. She had just opened her mouth to speak when someone or something rammed into her from behind, making her stumble and drop the papers she was carrying. A few loose sheets slipped to the ground and she stooped to pick them up.

By the time she had straightened back up, the woman had vanished. Norah looked about her in bewilderment. A group of Chinese tourists shoved past her, then a young couple with a pram. Where had she gone? Desperately scanning the street, Norah pushed her way between two football fans in Rapid Vienna scarves. The woman was so tall she ought to have stood out above the crowd, but she was nowhere to be seen; it was as if the earth had swallowed her up. Shame, thought Norah, she looked like a woman with a tale to tell.

But it had been slightly unnerving. 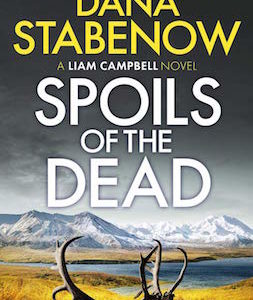 Spoils of the Dead Thirty years ago, July “Come on, Erik!” Josh's sneakers disappeared over a mussel-encrusted rock ridge left exposed...
© LitHub
Back to top