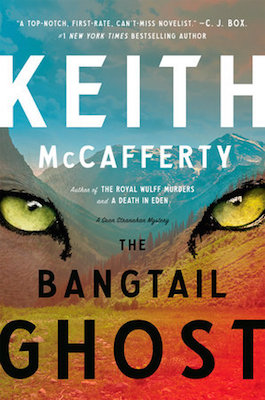 The following is an exclusive excerpt from The Bangtail Ghost, by Keith McCafferty. When Sheriff Martha Ettinger finds the remains of a woman who appears to have been dragged off by mountain lion, she hires her fiancé, sometimes-detective Sean Stranahan to help close the case. But Sean this is one in too many cases which appear to be terrible accidents, and is determined to find the connection.

The house was a fish out of water for the setting, a split‑level mid‑century modern with a backward‑slanting roof and casement windows offering a spectacular view of the Madison Range, if only a sliver of the river itself. It was a lot of concrete and steel in a development dominated by cabins built tongue‑and‑groove, but the house, Sean thought, had been constructed before the onslaught of second homes choked the valley, back when the concept of covenants still made most people think of church. He parked and climbed out of his Land Cruiser.

Finding the residence had been surprisingly easy, thanks to Sam’s eyes. After descending the ridge, Sean and Sam had explored the grounds around the trailer while Martha called for troops on the radio. It was a search they’d had neither time nor light to do on the way in, and Sean had hoped they might find cat tracks and settle the identity of the killer once and for all. But the snow had been falling off and on all night and was deep enough to keep its secrets, and he was pondering his next step when he’d heard Sam’s “aha” grunt. He’d found him behind the trailer, sporting a smile that revealed the V‑shaped notches in his front teeth.

“See how the snow’s been shoveled out to make a clear lane all the way around the trailer? It was piled into this bank. He hit it when he backed his truck around to drive out. See?”

The indented letters of the license plate were clearly visible where the plate had pressed into the packed snow: maestro 5.

“You figure it’s the hunter you winched out? His rig?”

Martha had walked over while they were examining the snowbank. “The number,” she said. “Is that a five or a six?”

“I can’t do all your job for you,” Sam said. “I have to leave you with some shred of dignity.”

But he’d done enough of it, and Martha had the name and address of the truck’s owner plus the model and registration within the hour. By then the techs were searching the trailer and three men from the Wildlife Human Attack Response Team, called by the acronym WHART, had arrived to investigate the scene of the kill and remove the human remains. Martha was still waiting on the hounds‑ men when Sean left to visit the address that the license plate had led them to.

He pressed the buzzer beside the door, waited a minute, then knocked.

Down the hill on the lawn, two children were taking turns ramming a snowman with a Flexible Flyer sled. They eyeballed Sean incuriously, as they might glance for a few moments at a deer that wandered into the yard. Sean had driven in over two sets of tire tracks, one coming in, the mud and snow it disturbed stiff, one going back out sometime later, the snow softer. The only vehicle was a late‑model RAV4 in electric blue with a cracked headlight and a dent on the left front panel. The training bra of trucks was nowhere to be seen. Sean went back to his rig and listened to the engine tick down as a girl with a mess of curls detached herself from the snowman demolition zone to walk up the hill.

“Did you come to tune the piano?” she asked. “Do I look like a piano tuner?”

“Sort of,” the girl said. She looked to be eight or so. “I don’t know. Are you? When it’s winter, the humidity is too low and the keys go flat. The ideal is forty‑two percent, but it’s like twenty‑two now. But Daddy says we can’t afford one.”

“What can’t you afford?”

“A humidifier.” Her tone said he should know this, whether he was the piano tuner or not. “That’s what I want for Christmas. Or before, if we get some money.”

“Then you play?” Sean asked. Another silly question. “Of course.”

“How about him?” He gestured down the hill toward the boy. She nodded. “Jimmy’s okay, but not as good as me. I’d have a chance at being a career pianist if my fingers were longer. Daddy says it’s his fault. He has short fingers. It’s like a family curse.”

“Oh, yes. Billy Joel and Elton John are my favorites.”

“What do you play of Elton John?”

“But you just called him Elton.”

“That’s because that’s what he told me to call him.”

“Yes, when he played in Missoula. I got to go backstage because I won the six‑and‑under division of the Treasure State Music Competition for popular song.”

“What did you play?”

“‘Rocket Man.’ Elton gave me a pair of sunglasses. Mommy had them framed. They have blue sequins. They’re on the mantel. Would you like to see them?”

“I would, but the reason I came here was to talk to your father. His name is Leonard Johnson, right?” That was the name on the registration for the license plate.

“Lenny. Or Lenny Two J. ’Cause our last name’s Johnson and his middle name is James.”

“No, he took the truck into town to get a haircut.”

“Is your mother home?”

“No. She went with him to get groceries.”

“Why didn’t she take the blue car?”

“Because Daddy drove in with the headlights out and ran into it by accident. It bent the radiator.”

“This morning, when he came back from hunting. He said he didn’t put the lights on so not to wake us up, ’cause it was early, and that’s why he hit the car. Mommy’s mad at him. She called him an imbecile. I looked it up. It’s a kind of insult. She’s always mad at him for something.”

“What’s your father do?”

“He conducts the orchestra.”

“No, there’s no orchestra in Ennis. In Bridger.”

He remembered the letters on the vanity license plate. maestro 5. “He lost his job,” the girl said.

“We’re not allowed to talk about it, but he sleeps in the music room now. You can hear him playing the violin. ‘In that way lies madness.’ That’s what G‑Ma says.”

Beyond her, Sean saw the brother trudging up the hill, towing the sled. Behind him, the snowman lay in ruins.

“Who’s looking after you?” Sean asked. “Nobody answered when I rang the bell.”

“G‑Ma is. But the buzzer doesn’t work. She wouldn’t hear it, anyway. When we go outside she sits in the window, but she always falls asleep. She says it doesn’t matter because we’re all in the bubble and her aura is looking out for us.”

The brother had arrived. Winded, he set his hands on his hips. Same curls as his sister. Coonskin hat, minus the tail. “You’re not supposed to talk to strangers,” he said.

“No, but I don’t want you to get into trouble. Do you think you could do me a favor? Could you give your father my card?”

Sean fumbled a card from the glove compartment of the Land Cruiser. He had two cards. One read blue ribbon watercolors, the lettering embossed above a pastel landscape with a river. The other read usual suspect investigations and featured an Atlantic salmon fly pattern of the same name. It included Sean’s investigator’s license number and contact information. Martha had once told him that the fly, however good the illustration, was an amateurish touch. It made him seem less of a serious person. Sean had re‑ plied that that was the point. He really wasn’t looking for work.

After a moment’s hesitation, he picked out one of his artist cards and drew a circle around the street address of his second‑floor studio in the Bridger Mountain Cultural Center.

“Tell your dad I’d like to ask him how his hunting went up Johnny Gulch.”

“Still, I’d like to talk to him. Tell him he’ll want to see me.” He handed the card to the girl, who bent her face over it.

“Did you paint that?”

“Let me see,” the boy said, and when he grabbed for the card, she held it out of reach over her head.

“I’ll tell Mommy you were talking to a stranger,” he said. “I’ll say you were first.”

“But you’re older. You’ll be the one gets in trouble.”

This seemed to register and she handed him the card. “You won’t be able to read it, anyway.”

And to Sean, “I hope the tuner comes today.”

He left them standing in the bubble under G‑Ma’s aura, the boy’s brow furrowing as he mouthed the words on the card, the girl ruing the tragedy of an out‑of‑tune piano, hoping for humidity. 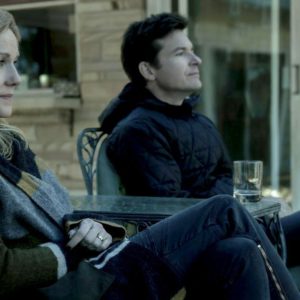 What I Learned About Myself While Tallying The Body Count of Ozark's First Season We like to think we’re decent people, the way you try to be, but there we were, counting our fingers to recall how many...
© LitHub
Back to top