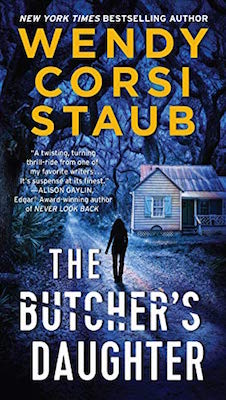 The following is an exclusive excerpt from The Butcher’s Daughter, by Wendy Corsi Staub, the thrilling third installment of the Foundlings trilogy.

The city that had snoozed well past dawn on New Year’s yesterday has resumed humming with hyperactivity. Amelia shoulders her way off a rush-hour subway wearing last night’s hoodie, jeans, and sneakers under a puffy parka. Unpresentable, yes, but she has no client appointments until this afternoon, and can dash home to shower and change at lunchtime. Right now she’s on a mission so pressing that she skips her morning latte, barely breaking stride to buy mucky coffee-cart brew as she hurries toward her office.

At the turn of the last century, the brick tenement was overcrowded with European immigrants and the neighborhood rampant with slums. By the turn of this one, Allen Street’s historic medians were decaying and the building was a rat-infested ruin. Now it houses professional offices on a charming block overlooking a restored, landscaped pedestrian mall. She climbs the creaky wooden stairway to a door bearing a brass plate that reads AMELIA CRENSHAW HAINES, INVESTIGATIVE GENEALOGIST. Every time she sees it, wistfulness taints the surge of pride. No longer just because Bettina, Calvin, and her beloved mentor Silas Moss can’t bear witness to her thriving career, but because the husband who’d proudly put up the placard is no longer in her life.

“Who knows? We might find out we can’t live without each other, either,” Aaron had said, zipping his suitcase on the chilly November morning before walking out the door for the last time.

She couldn’t answer the question then for the fierce lump in her throat.

She can’t now, because she’s not sure.

Her life has gone on much the same way it always has. Aaron had traveled more than he was home ever since he’d made partner at his corporate law firm years ago, so she’s long accustomed to being on her own. In fact, her loneliest moments had unfolded when they were together.

Her kitten, Clancy, is affectionate company, her work keeps her busier than ever, and her social life is unchanged. Childless by choice, Amelia and Aaron hadn’t hung out with fellow couples in years. He’d cultivated his circle of pals and colleagues and she has hers, though her longtime friendship with his sister has grown strained.

“You’re part of the family. My parents still want you to come for Thanksgiving,” Karyn had said back in November.

“Oh, Aaron is fine with it. He knows we all love you. He loves you, too. I’m sure you guys will work things out. He can be difficult, but he’ll come around.”

“You mean, the thing with your mother?”

The thing with your mother—as if it’s some innocuous to-do list detail that needs tending. As if Amelia hadn’t finally clawed her way out of a gaping crater, scarred and dazed, only to be hit again by that unexpected DNA match to Bettina.

She’s hoping to find some answers at last on Martin Luther King weekend, when she and her friend Jessie fly to Bettina’s hometown. The plane tickets had been Jessie’s Christmas gift to Amelia.

“We’re going to figure this out together, Mimi, on location!”

Jessie is the only one who calls her by that nickname, and as a fellow foundling, the only one who understands what it’s like to have been abandoned as a newborn. Well, besides Clancy, who’d been found on the street and brought to a kill shelter, where Amelia had rescued him.

She unlocks the door and steps into an office that had once felt spacious, with high tin ceilings and tall windows. Now it’s cluttered with stacks of bankers boxes containing files that long ago overflowed the cabinets, courtesy of predigitalization-era research.

The building is chilly every Monday morning, but she’s earlier than usual today, and the place had been vacant through holiday week. A cold wind rattles the windowpane and a smattering of snowflakes swirl beyond. Still bundled in her coat, she settles on the couch with her client records for the woman she now knows was Brandy Harrison.

Last night as she was drifting off to sleep, she remembered something. Brandy might have lied about her name, but she’d given Amelia a folder filled with newspaper accounts about a Black toddler abandoned at a Connecticut shopping mall in 1990. Why?

Skimming the thick sheaf in the manila folder, Amelia is struck anew by two details.

There’s no mention in any press account of a later adoption or charmed life the foundling had supposedly gone on to lead as Lily Tucker.

And the articles Brandy had given her weren’t printed off the internet, as they would be if the story had been accessed in online archives. These are photocopies of actual clippings, mostly torn, not cut, from newspapers. Either they’d been collected at the time the story was unfolding, or someone had gone to a lot of trouble and expense to hunt down copies of vintage papers to make the file look authentic.

The Connecticut child was discovered at downtown New Haven’s Chapel Square Mall just after the place opened. Unlike Amelia, she’d have been old enough to comprehend that she was alone in the world and surrounded by strangers.

The media accounts detail how she’d been found in a dim corner of the cavernous mall, sound asleep in a cheap folding stroller. The accompanying photos show a strikingly pretty little girl. Her chin is down, upturned gaze wide-eyed and frightened. Amelia studies her features. Her mouth is a delicate rosebud mouth; her enormous eyes fringed by long, thick lashes. There’s something familiar about her.

She uses her phone to snap photos of the child in the clippings, then grabs another client’s file and snaps a few more. Flipping back through the articles, she makes notes on a pad.

The child is described as unkempt, dressed in grungy pink corduroy overalls and a jacket that was two sizes too big for her, and a season shy of the weather. No mention is made of a little gold ring on a chain.

That doesn’t mean there hadn’t been one. But why would the authorities withhold it from the press? There was no reward offer to protect, and it wasn’t a criminal case.

Her phone dings with a text.

It’s from Jessie. Last night, Amelia had called to tell her about her meeting with Barnes. Of course Jessie immediately wanted to know if he was single and hot.

“Both, but that’s not why I’m calling,” Amelia said.

She told Jessie about the Brooklyn murders and the gold ring, leaving out Perry Wayland and the bribe, having promised Barnes she’d keep it to herself. 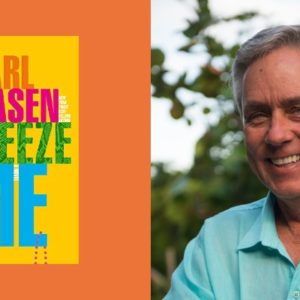 Carl Hiaasen on Palm Beach, Slithery Characters, and Florida Crime Fiction On reflection, it seems like Carl Hiaasen and the Palm Beach charity set have been circling one another for some time. Hiaasen...
© LitHub
Back to top