The following is an exclusive excerpt from The Guest List, by Lucy Foley. At an immaculate celebrity wedding on an island off the coast of Ireland, tensions between the guests, and the wedding party themselves, start to rise. And then someone ends up dead.

All of the wedding party are here now. Things are about to crank into another gear: there’s the rehearsal dinner this evening, with the chosen guests, so the wedding really begins tonight.

I’ve put the champagne on ice ready for the predinner drinks. It’s vintage Bollinger: eight bottles of it, plus the wine for dinner and a couple of crates of Guinness—all as per the bride’s instructions. It is not for me to comment, but it seems rather a lot. They’re all adults, though. I’m sure they know how to restrain themselves. Or maybe not. That best man seems a bit of a liability—all of the ushers do, to be honest. And the bridesmaid—the bride’s half sister—I’ve seen her on her solitary wanderings of the island, hunched over and walking fast like she’s trying to outpace something.

You learn all the insider secrets, doing this sort of work. You see the things no one else is privileged to see. All the gossip that the guests would kill to have. As a wedding planner you can’t afford to miss anything. You have to be alert to every detail, all the smaller eddies beneath the surface. If I didn’t pay attention, one of those currents could grow into a huge riptide, destroying all my careful planning. And here’s another thing I’ve learned—sometimes the smallest currents are the strongest.

I move through the Folly’s downstairs rooms, lighting the blocks of turf in the grates, so they can get a good smolder on for this evening. Freddy and I have started cutting and  drying our  own turf from the bog, as has been done for centuries past. The smoky, earthy smell of the turf fires will add to the sense of local atmosphere. The guests should like that. It may be midsummer but it gets cool at night on the island. The Folly’s old stone walls keep the warmth out and aren’t so good at holding it in.

Today has been surprisingly warm, at least by the standards of these parts, but the same’s not looking likely for tomorrow. The end of the weather forecast I caught on the radio mentioned wind. We get the brunt of all the weather here; often the  storms  are much worse than they end up being on the mainland, as if they’ve exhausted themselves on us. It’s still sunny out but this afternoon the needle on the old barometer in the hallway swung from fair to changeable. I’ve taken it down. I don’t  want the bride to see   it. Though I’m  not sure that she is the sort to panic. More the sort  to get angry and look for someone to blame. And I know just who would be in the firing line.

“Freddy,” I call into the kitchen, “will you be starting on the dinner soon?”

“Yeah,” he calls back, “got it all under control.”

Tonight they’ll eat a fish stew based on a traditional Connemara fisherman’s chowder: smoked fish, lots of cream. I ate it the first time I ever visited this place, when there were still people here. This evening’s will be a more refined take on the usual recipe, as this is a refined group we have staying. Or at least I suppose they like to think of themselves as such. We’ll see what happens when the drink hits them.

“Then we’ll be needing to start prepping the canapés for to- morrow,” I call, running through the list in my head.

“And the cake: we’ll be wanting to assemble that in good time.” The cake is quite something to behold. It should be. I know how much it cost. The bride didn’t bat an eyelid at the expense. I believe she’s used to having the best of everything. Four tiers of deep red velvet sponge, encased in immaculate white icing and strewn with sugar greenery, to match the foliage in the chapel and the marquee’s tents. Extremely fragile and made according to the bride’s exact specifications, it traveled all the way here from a very exclusive cake-maker’s in Dublin: it was no small effort getting    it across the water in one piece. Tomorrow, of course, it will be destroyed. But it’s all about the moment, a wedding. All about the day. It’s not really about the marriage at all, in spite of what everyone says.

See, mine is a profession in which you  orchestrate happiness.   It is why I became a wedding planner. Life is messy. We all know this. Terrible things happen, I learned that while I was still a child. But no matter what happens, life is only a series of days. You can’t control more than a single day. But you can control one of them. Twenty-four hours can be curated. A wedding day is a neat little parcel of time in which I can create something whole and perfect  to be cherished for a lifetime, a pearl from a broken necklace.

Freddy emerges from the kitchen in his stained butcher’s apron. “How are you feeling?”

I shrug. “A little nervous, to be honest.”

“You’ve got this, love. Think how many times you’ve  done this.”

“But this is different. Because of who it is—” It was a real coup, getting Will Slater and Julia Keegan to hold their wedding here. I worked as an event planner in Dublin, before. Setting up here was all my idea, restoring the island’s crumbling, half-ruined folly into an elegant ten-bedroom property with a dining room, drawing room and kitchen. Freddy and I live here permanently but use only a tiny fraction of the space when it’s just the two of us.

“Shush.” Freddy steps forward and enfolds me in a hug. I feel myself stiffening at first. I’m so focused on my to-do list that it feels like a diversion we don’t have time for. Then I allow myself to relax into the embrace, to appreciate his comforting, familiar warmth. Freddy is a good hugger. He’s what you might call “cuddly.” He likes his food—it’s his job. He ran a restaurant in Dublin before we moved here.

“It’s all going to work out fine,” he says. “I promise. It will all be perfect.” He kisses the top of my head. I’ve had a great deal of experience in this business. But then I’ve never worked on an event I’ve been so invested in. And the bride is very particular—which, to be fair to her, probably goes with the territory of what she does, running her own magazine. Someone else might have been run a little ragged by her requests. But I’ve enjoyed it. I like a challenge. Anyway. That’s enough about me. This weekend is about the happy couple, after all. The bride and groom haven’t been together for very long, by all accounts. Seeing as our bedroom is in the Folly too, with all the others, we could hear them last night. “Jesus,” Freddy said as we lay in bed. “I can’t listen to this.” I knew what he meant. Strange how when someone is in the throes of pleasure it can sound like pain. They seem very much in love, but a cynic might say that’s why they can’t seem to keep their hands off each

other. Very much in lust might be a more accurate description.

Freddy and I have been together for the best part of two decades and even now there are things I keep from him and, I’m sure, vice versa. Makes you wonder how much they know about each other, those two.

Whether they really know all of each other’s dark secrets. 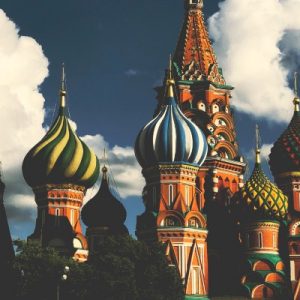 With the World on Lockdown, Crime Fiction Is the Perfect Way to Travel The snow swirls around my feet, rising in a tight, whirling embrace as the wind gathers in the dark. In the distance, Moscow’s...
© LitHub
Back to top