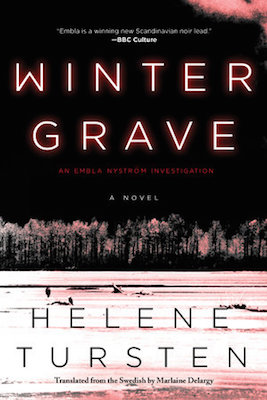 The following is an exclusive excerpt from Winter Grave, by Helene Tursten. In this wintry Scandinavian thriller, a child goes missing and the police are unable to divine any clues from the taciturn boy who was last to see her. When a second child goes missing soon thereafter, suspicion grows and townspeople begin to turn on one another.

“So we’re supposed to sit here and wait until that asshole and his son feel like turning up? Why the hell didn’t you stand your ground and bring the boy in?”

Roger Willén, the acting area chief superintendent for Trollhättan, glared at Patrik Lind and Alice Åslund. Before either of them had the chance to formulate a response, their boss, Detective Chief Inspector Sven-Ove Berglund, stepped in.

“Believe me, Roger, Olof Sjöberg isn’t an easy man to deal with,” he said, raising his bushy eyebrows meaningfully.

“What’s the problem? Why does he deserve special treatment?” Willén demanded.

Berglund looked down at his hands, which were resting on the desk. They were wrinkled and marked with age spots. Alice wondered if he was praying to a higher power for strength and energy.

“Olof Sjöberg is what you might call a power player in Strömstad. I know him well; we grew up not far from each other, and we were classmates for many years. He’s always . . . set the agenda, so to speak. We often see each other at various events—this is a small town. Sometimes we play golf together, and we’ve gone sailing several times over the years.”

He glanced up at Willén, who was standing straight-backed in front of his desk. The chief superintendent’s uniform sat perfectly across his broad shoulders, and the creases in his trousers were razor-sharp. His head was virtually clean-shaven, which no doubt contributed to the military impression he made on his subordinates. He appeared to be standing at attention.

Berglund thought for a moment before he answered. It was obvious that he was choosing his words with care.

“He inherited a flourishing business from his father. I assume Olof takes after him. They’ve made a major contribution to the economic health of Strömstad. Entrepreneurs, both of them. They’ve created many job opportunities.”

“What does Sjöberg actually do?” The chief superintendent’s question carried an implied sneer. Inspector Berglund spread his hands wide and smiled.

“What doesn’t he do? His father started up a large auto repair workshop, then partnered with the town’s biggest car dealership. This was just after the war, but he was far-sighted and ambitious. He bought up as much land as he could and built apartment blocks and houses to rent out. Olof worked with his father until the old man died in the mid-eighties, then he took over. He’s done a good job and expanded the business wherever possible. He sells cars, boats, and property. In recent years the Norwegians have been major clients.”

Patrik coughed discreetly. To Alice’s horror he had decided to say something.

“He was very unpleasant and obviously intoxicated, and it wasn’t even nine-thirty in the morning,” he announced.

Berglund immediately put him in his place, which wasn’t what Patrik had been expecting.

“I’m not surprised. We were at the same Christmas party yesterday—the local branch of the Lions. There was plenty of mulled wine, among other things . . . If you’d breathalyzed me a few hours ago I’m sure you’d have gotten a positive result.” He gave the chief superintendent an amused glance before adding, “It wouldn’t have been a high reading, of course. After all, I had to come to work today. Although I did leave the car at home and walk in.”

Article continues after advertisement
Roger Willén narrowed his eyes. “Did you know the girl was missing last night?”

Roger Willén narrowed his eyes. “Did you know the girl was missing last night?”

Berglund shook his head. “No. I’m on the Lions’ social committee, and we were at the venue by five. That’s when the station closes, but I left an hour early, at four. The call came in at seven, so it went straight to the regional unit’s central control. They chose to send you over from Trollhättan. Uddevalla has a problem with the stomach flu, plus they still haven’t caught that serial rapist. One woman was almost strangled, so that investigation has top priority.”

Willén was already aware of the situation, but he nodded in agreement. He had arrived in Strömstad that morning with two of his detectives, mainly to join the search for Amelie, but also to get to know the local team. He’d sent the detectives to speak to Amelie’s teacher and classmates; when Paula Nilsson and Lars Engman returned to the station, they would be expecting to question Kristoffer Sjöberg on the events of the previous evening, but clearly that wasn’t going to happen. They would have to wait until it pleased Olof Sjöberg and his lawyer to wander along with Kristoffer.

Willén was annoyed, but he tried to hide it.

“This station isn’t manned on weekends, so Nilsson and Engman can base their operations here over the next couple of days. Is there a spare office they can use if they have to stay on into next week?”

He straightened his back even more. Alice could almost hear the seams of his uniform creaking.

“No problem,” Berglund assured him.

If the inspector and Olof Sjöberg are the same age, that means Sjöberg is sixty-four, Alice thought. But Berglund looks significantly older and more tired. Willén was only about forty, but behaved like some crusty old general. Then again, he was the highest-ranking officer in the room, thanks to the new structure of the Swedish police service.

Following the reorganization a year or so ago, the country’s twenty-one police districts had been brought together into seven regions. Strömstad was part of the Western Region and was under the jurisdiction of Fyrbodal, which also included Trollhättan, Vänersborg, and Uddevalla. The control center was based in Gothenburg and decided which area should be responsible for a particular investigation and which units should be brought in.

One effect of this restructuring was serious turbulence at every level. Units that had worked well for many years were broken up, with team members being dispersed to new departments. The union was highly critical of the reform, and those on the ground were very unhappy. A significant number of older officers had taken early retirement.

Roger Willén was an example of a younger man who had been moved up the promotion ladder, and the fact that he took his role extremely seriously was clear to everyone in the room. According to what Sven-Ove Berglund had heard, he was a good policeman. His former chief in Trollhättan, Ann-Katrin Svantesson, was now in charge at Fyrbodal. Berglund had heard nothing but positive comments about her, too. The new organization might function well in time, but personally he was sick of the whole thing. He had decided to retire at the end of June, but right now that seemed like a lifetime away.

The intercom on his desk buzzed, and Kicki on reception informed him that Olof Sjöberg’s lawyer had called to say they’d be there between three and four.

Willén compressed his lips into a thin line. His ice-blue eyes appeared to be covered in a thin layer of frost, and the coldness in his voice was unmistakable when he spoke. “Is everyone at that man’s beck and call?”

Sven-Ove Berglund smiled for the first time that morning. “I guess you could put it that way,” he said.

Willén turned to Patrik and Alice. “You can go.”

They didn’t need telling twice. After they had closed the door behind them, Willén paced for a little while, then stopped in front of Berglund’s desk.

“Why is Sjöberg doing this? Because he can, or because there’s something suspicious about his son?”

Berglund remained silent for a moment, then he took a deep breath and looked up at his younger colleague. “Sit down,” he said, gesturing toward the shabby chair.

Willén grasped the creases in his trousers between thumb and forefinger before cautiously lowering himself onto the rickety seat.

Berglund took his time before he began to speak. “I was at both of Olof’s weddings,” he finally said. “He divorced his first wife about twenty years ago, after he met Ann. She was younger than him, and she’d also been married before. Olof’s daughter was almost grown up, but Ann didn’t have any children. Eventually Kristoffer came along. He was premature and went straight into an incubator. The situation was critical, but he made it. He had to have heart surgery when he was a baby, I remember that. But he also suffers from a number of other . . . problems as a result of what he went through. He doesn’t talk much and tends to keep to himself. He’s phenomenal when it comes to anything mechanical, particularly veteran and old American cars. That’s also Olof’s main hobby, and the two of them spend a lot of time together tinkering around. As I said, for Olof it’s a hobby, but it’s Kristoffer’s job, and his main interest in life. He’s a genius!”

“So it’s because the boy is mentally handicapped that Sjöberg is protecting him from us?” Willén said sharply.

“Kristoffer isn’t mentally handicapped—quite the reverse. He’s just a bit different,” Berglund replied calmly as he contemplated the bandbox-neat chief superintendent perched on the visitor’s chair. Doesn’t drop his guard for a second, he thought. He decided not to mention that he was Kristoffer’s godfather.

“There’s a reason for Olof’s protective attitude. Ann died ten years ago. She had a stroke while she was in the shower and collapsed. Dead, with no warning. Since then it’s just been Olof and Kristoffer. They’re very close,” he said.

Willén gave his colleague a long look. “How old is the boy now?”

“Seventeen. Olof mentioned at the party last night that Kristoffer’s about to go for his driver’s license. Apparently there shouldn’t be a problem. He reckons he’ll be ready for his test in April, when he turns eighteen.”

“But until then he drives around in a so-called A-tractor.” Willén fell silent again, his expression pensive. Eventually he stood up. “I’ll come back at three—I want to sit in on the interview. See you later.”

He left the office, and Berglund heard his energetic footsteps hurrying down the stairs. The inspector remained where he was, contemplating an embroidered picture that had hung in the same spot on the wall ever since his predecessor’s day. Over the years the stiff flowers had taken on a faded, grayish tone and did nothing to lighten the atmosphere in the room. However, the picture had always been there, and there it would stay. Nobody noticed it anymore anyway.

Berglund sat up a little straighter, took out his cell phone, and made a call. A mechanical voice asked him to leave a message after the tone. When the beep stopped, he said, “Olof—it’s Sven-Ove. Call me on my personal cell as soon as you can.” 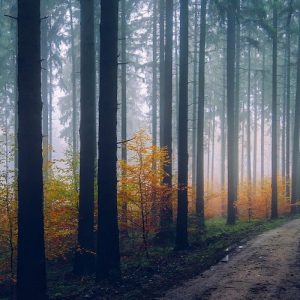 The New Voices of Country Noir How to define “country noir”? It’s more than just murder and mayhem in a rural place (although that’s always a big component);...
© LitHub
Back to top