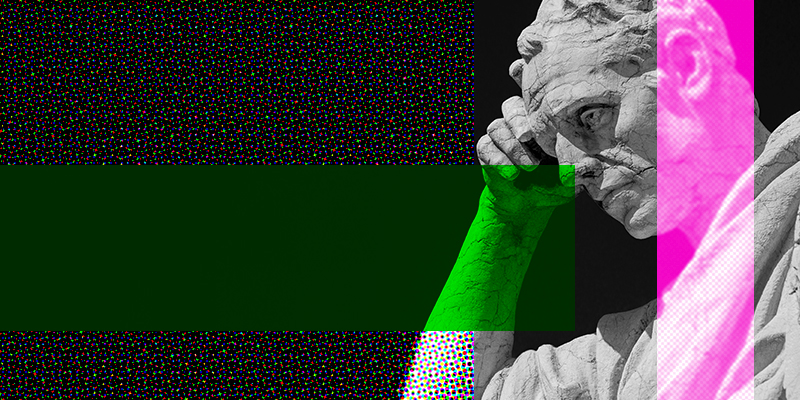 "Genre fiction can be every bit as inventive and arty and revelatory as something dubbed literature."

See if you agree:

Genre fiction guarantees a beginning, a middle, and an end.

The word “genre” is a kind of shorthand for the reader: expect closure.

Literary fiction? Not so much.

“Literary” suggests shiny prose and real life on the page. And part of the bargain is that the ending could be inconclusive. Thought-provoking. Not always, of course, but that’s a distinct possibility.

But fans of genre fiction know there is as much powerful commentary on the human condition in a good mystery as there is in any novel up for the Booker or Pulitzer. “Genre” fiction can be every bit as inventive and arty and revelatory as something dubbed literature.

Of course. It’s a known fact.

I don’t know what Gary Reilly was thinking when he wrote The Paradise That Lurks in Female Smiles. But it’s got crime fiction bones and ample literary touches. The story in a nutshell: Earnest writing teacher Charley Quinn has his world upended by a new female student who brings him sex, intrigue, and puzzles about her past.

The story is also full of Charley Quinn’s keen observations on the world around him, including his somewhat blunt opinions on the transactional nature of male-female relationships.

I don’t know what Gary’s objectives were when he wrote Paradise Lurks because Gary died in 2011, leaving behind 25 unpublished novels. When he died, we had been close writing pals for about seven years, but Paradise Lurks was one of the few books that he and I did not discuss.

Paradise Lurks marks Reilly’s 16th posthumously published novel. It follows nine novels in Reilly’s Asphalt Warrior series, a trilogy based on Gary’s experiences in the Vietnam War, and three other standalones. (I am the co-publisher of these books.)

Among those three standalones is a straight-up chunk of genre fiction—a darkly comic suburban noir called The Circumstantial Man. That book, published in 2018, earned praise from Jeffery Deaver, Chris Holm, Michael Harvey, Patricia Abbott, Brendan Dubois, Jeffrey Siger, Carter Wilson (all of whom know their fair share of genre!) and others.

Six of Gary’s books have been finalists for the Colorado Book Award in, yes, various genres. National Public Radio, Booklist, and The Denver Post, among others, have also raved about the quality of Gary’s works.

Gary knew genre fiction. He loved old pulp crime fiction paperbacks and he gobbled up sci-fi B-movies with abandon. He knew what he was doing when he wrote Paradise Lurks. The main ingredients were there for another fat slab of crime fiction. To wit, there’s the aforementioned writing teacher Charley Quinn, who is more than a bit of a self-doubting brooder and parttime janitor. There’s the alluring Linda Hathaway, who is one of his students and, soon lover with evasive answers and a stash of mind-enhancing substances. There’s a self-assured writing student named Drew. There’s a robbery and break-in at a medical clinic where Charley sweeps and mops and empties trash in the evenings. And there’s a detective who investigates the break-in but who might also discover Linda’s stash.

The ingredients are there, but Reilly keeps his focus on the Charley Quinn character.  He doesn’t play it straight. Or predictable. How boring would it be if every novel followed a formula?

Genre, of course, is a construct. It’s artificial. It’s helpful for booksellers and, sure, it’s efficient to walk into a bookstore or library and make a beeline to our favorite section.

Like rules, however, constructs are meant to be broken. Or bent. Or toyed with.

A few of my favorite books that prioritize character and literary insights but can be all be found on the mystery shelves: 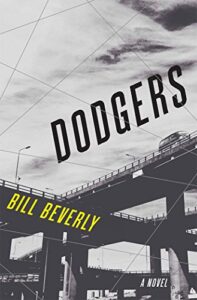 Humanity oozes from every syllable of Dodgers, which is either a Great American Novel with crime fiction undertones or a crime novel with not a care in the world about the expected tracks of the genre’s normal grooves.

Dodgers is about 15-year-old East, who “had never been a child.” East falls in debt to his boss and is sent to Wisconsin to kill a witness in an upcoming trial. East and three others in his group are to avoid looking like “ignorant gang boys.” Road trips mean change, right? Dodgers is memorable and gripping in its own way from start to moving, unpredictable finish. 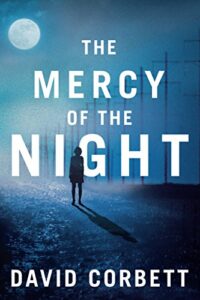 The Mercy of the Night by David Corbett

When we meet Jacquelina Garza she’s turning tricks again but trying to avoid crank. When she was eight, Jacqi was abducted by a predator and managed to escape. Now, her life is a mess and she’s protecting a valuable secret.

Lonnie Bachmann knows this particular “circle of hell” where Jacqi is stuck. She has started a halfway house and enlists the help of a former litigator, Phelan Tierney. Tierney is soon involved in tutoring Jacqui, with a goal of earning her GED.

One of Jacqi’s “frequent flyers” is murdered. And Jacqi disappears. There’s plenty of plot available for a fast-paced action thriller, but Corbett goes organic and substantive, letting the characters breathe and interact as the tension burns. Rewarding to the core. 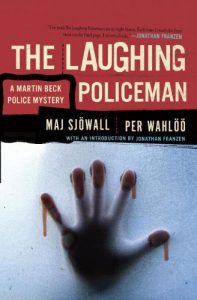 The Laughing Policeman by Maj Sjöwall and Per Wahlöö

Co-authors Maj Sjöwall and Per Wahlöö chop down the “one hero” or “central protagonist” notion in The Laughing Policeman. Written in 1968, and the fourth of ten novels featuring Swedish detective Martin Beck, the prose swoops down from extreme omniscience with a dry, matter-of-fact coolness to the tone—before picking up the thoughts and actions of one of the many Stockholm cops in the ensemble.

The Laughing Policeman climbs a mountain of plot. A cold case becomes the key to solving a mass murder. Finding out how the cold case connects to the mass murder takes time and effort. Clues are scant. The typical rising-action arc is not here. All hope is lost—repeatedly. The work is procedural, dogged, and nuanced.

One of the most gripping sections is a 17-page exchange between Kollberg, Beck’s trusted colleague, and the dead cop’s wife. It’s a masterpiece scene. The Laughing Policeman has all the external appearances of straight genre fiction, including a knockout finish, but its path is decidedly something else. 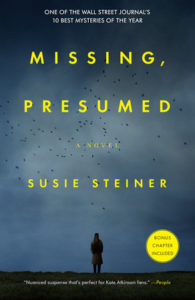 Missing, Presumed is sip-and-savor tasty. The loss this year of British writer Susie Steiner, who died at a very young age, was tragic. And any brief sampling of her writing makes the loss even more painful. When I finished Missing, Presumed, I went right back to the opening chapters to see how Steiner slipped her funny, odd, curious detective Manon Bradshaw onto the page and then tangled her up in the impossible case of a missing college student.

There are sparkles in the caulking of Steiner’s prose, the nifty granular details and observations that both encourage and reward a careful read. And, finally, it’s a solid theme—right there on page one and right there on page The End. A basic yearning, an essential need for human connection.

Manon Bradshaw is a fascinating cop and person. Person first. For instance—she’ll sleep with a guy just to shut him up. She believes in sniffing—yes, inhaling—her men to discern their good points and bad. She reverts to her “mammalian self” and puts out on first dates to determine as quickly as possible if she’s plucked a good fish from the gene pool.

The story provides ample opportunity for commentary on power, authority, money, immigration, sexuality, race, and the concept of family. More than anything, it’s about family in all its various forms—official and unofficial. It’s about ties, bonds, connections, and finding a home. The final flip of clue-finding is a nifty one that gives Manon a chance to put two seemingly unrelated ideas together. Steiner deftly planted both disparate seeds.

Missing, Presumed is a wonderful, memorable read—first sniff to last. 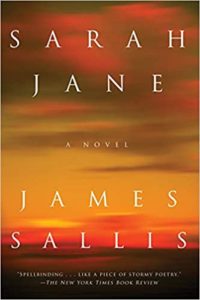 Sarah Jane defies pigeonholing. Told in first-person, our titular narrator has a “patchwork past.” She’s the daughter of a chicken farmer. She’s been a short-order cook. Military vet. And, for six hours, a mom. Suddenly, she is acting sheriff. The previous sheriff has gone missing. Sarah Jane narrates in fragments. Sarah is running from something. “I didn’t do all those things they say I did. Well, not all of them anyway.” That’s right up front in Chapter 1, paragraph seven.

Amid chaos and trouble, Sarah Jane thinks about storytelling. She thinks about the arc and shape of her life and the lives of others. She is perceptive and empathetic. Sarah doesn’t miss much. She’s both in the moment and floating above, looking down. She thinks about how American novels focus on redemption as some sort of indicator of the “nation’s common soul flashing guilts it needed to pick up and put down elsewhere.”

All in a brisk 200 pages, Sarah Jane is a mesmerizing slice of pure literature, as good as it gets. 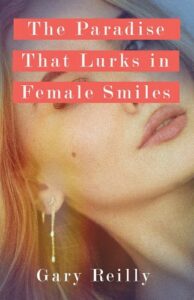 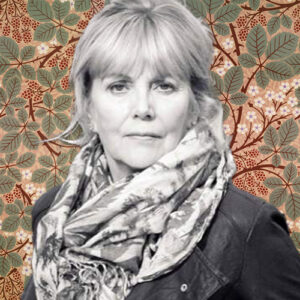