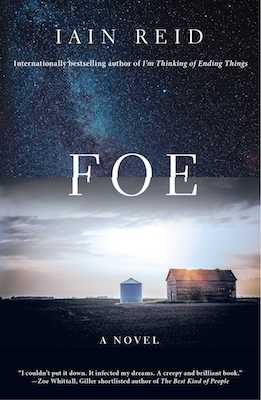 The following is an exclusive excerpt from Foe, the sophomore crime novel from Iain Reid, whose debut, I’m Thinking of Ending Things was a breakout hit. In the following passage, we encounter a mysterious interloper who disrupts the peaceful life of a couple living a reclusive existence.

Two headlights. I wake to the sight of them. Odd because of the distinct green tint. Not the usual white headlights you see around here. I spot them through the window, at the end of the lane. I must have been in a kind of quasi slumber; an after-dinner daze brought on by a full stomach and the evening heat. I blink several times, attempting to focus.

There’s no warning, no explanation. I can’t hear the car from here.

I just open my eyes and see the green lights. It’s like they appeared out of nowhere, shaking me from my daze. They are brighter than most headlights, glaring from between the two dead trees at the end of the lane. I don’t know the precise time, but it’s dark. It’s late. Too late for a visitor. Not that we get many of them.

We don’t get visitors. Never have. Not out here.

We don’t get visitors. Never have. Not out here.

I stand, stretch my arms above my head. My lower back is stiff. I pick up the open bottle of beer that’s beside me, walk from my chair straight ahead several steps to the window. My shirt is unbuttoned, as it often is at this time of night. Nothing ever feels simple in this heat. Everything requires an effort. I’m waiting to see if, as I think, the car will stop, reverse back onto the road, continue on, and leave us alone, as it should.

But it doesn’t. The car stays where it is; the green lights are pointing my way. And then, after a long hesitation or reluctance or uncertainty, the car starts moving again, toward the house.

You expecting anyone? I yell to Hen.

“No,” she calls down from upstairs.

Of course she’s not. I don’t know why I asked. We’ve never had anyone show up at this time of night. Not ever. I take a swig of beer.

It’s warm. I watch as the car drives all the way up to the house and pulls in beside my truck.

I hear Hen walk down the stairs and into the room. I turn around. She must have just gotten out of the shower. She’s in cutoff shorts and a black tank top. Her hair is damp. She looks beautiful. Truly. I don’t think she could look more like herself or any better than she does right now, like this.

Neither of us says anything else for a moment, until she breaks the silence. “I didn’t know you were here. Inside, I mean. I thought you were still out in the barn.”

She brings her hand up to her hair, playing with it in a specific way, curling it slowly around her index finger and then straightening the hair out. It’s compulsive. She does this when she’s concentrating.

Or when she’s agitated.

She stands there, staring at me. I don’t think she’s blinked. Her posture is stiff, reserved.

She takes a few hesitant steps toward me. She maintains more than an arm’s-length distance but is close enough now that I smell her hand cream. Coconut and something else. Mint, I think. It’s a unique smell, and one I register as Hen.

“Do you know anyone with a black car like that?”

No, I say. Looks official, like government, doesn’t it?

The windows are tinted. I can’t see inside.

“He must want something. Whoever it is. They’re here, they came all the way up to the house.”

Article continues after advertisement
“He must want something. Whoever it is. They’re here, they came all the way up to the house.”

A car door finally opens, but no one steps out. At least not right away. We wait. It feels like five minutes—standing, watching, waiting to see who will step out of the car. But maybe it’s more like twenty seconds.

Then, I see a leg. Someone steps out. It’s a man. He has long blond hair. He’s wearing a dark suit. Collared shirt, open at the top, no tie. He has a black briefcase with him. He shuts the car door, adjusts his jacket, and walks up to the front porch. I hear him on the old woodenplanks. He doesn’t need to knock on the door because we’re watching, and he can see us through the window. And we know he’s here, but we wait and watch anyhow, and eventually the knock comes.

You answer it, I say, buttoning a section of middle buttons on my shirt.

Hen doesn’t reply but turns and walks out of the living room, goes to the front door. She delays, looks back at me, turns, takes a breath, and then she opens the door.

“Hi there. Sorry to disturb you at this hour,” the man replies. “I hope it’s okay. Henrietta, right?”

She nods and looks down at her feet.

“My name is Terrance. I’d like to have a word with you. Inside, if possible. Is your husband home?”

The man’s exaggerated smile hasn’t changed since she opened the door, not at all.

What’s this about? I ask, stepping out of the living room, into the hall. I’m right behind Hen. I place a hand on her shoulder. She flinches at my touch.

The man turns his attention to me. I’m taller than he is, wider.

And older by a few years. Our eyes meet. He holds his attention on me for several moments, longer than what I deem normal. His smile moves to his eyes as if he’s delighted by what he sees.

Sorry, do we know you?

“This is very exciting.” He looks to Hen. She doesn’t look at him. “I had butterflies in my stomach the whole way over, and it’s not a short drive from the city. It’s thrilling to finally see you like this. I’m here to talk with you, both of you. That’s all,” he says. “Just to talk. I think you’ll want to hear what I have to say.”

Article continues after advertisement
“It’s thrilling to finally see you like this. I’m here to talk with you, both of you. That’s all…”

What’s this about? I ask again.

There’s something unusual about this man’s presence. Hen’s unease is visible. I’m uncomfortable because Hen is uncomfortable. He better start telling us more.

“I’m here on behalf of OuterMore. Have you heard of us?”

OuterMore, I say. That’s the organization that’s dealing with—

I open the door wider. Hen and I step aside. Even if this stranger has malicious intentions, I’ve seen enough to know Terrance is not a threat, not to me. There isn’t much to him. He has an office worker’s body, a delicate frame. He’s a pencil pusher. He’s not a man like me, a laborer, someone used to working with his body. Once inside the front hall, he looks around.

“Do you want to sit down, in here?” Hen says, leading us to the living room.

“Thank you,” he replies.

Hen turns on a lamp and sits in her rocking chair. I sit in my recliner. Terrance sits in the middle of the couch in front of us. He puts his case on the coffee table. His pant legs rise as he sits. He’s wearing white socks.

Anybody else in the car? I ask.

“Just me,” he says. “Making these kinds of visits is my job. Took a little longer to get here than I thought it would. You guys are a long way out. That’s why I’m a bit late. Again, my apologies. But it really is great to be here. To see you both.”

“Yeah, it is quite late,” says Hen. “You’re lucky you caught us before bed.”

He’s so calm, relaxed, as if he’s been here, sitting on our couch hundreds of times. His excessive composure has the counter effect on me.

He’s so calm, relaxed, as if he’s been here, sitting on our couch hundreds of times. His excessive composure has the counter effect on me. I try to catch Hen’s eye, but she’s just looking straight ahead and won’t turn her head. I return to the matter at hand.

What’s this about? I ask.

“Right, I don’t want to get ahead of myself. As I said, I’m a representative of OuterMore. We’re an organization that formed more than six decades ago. We started in the driverless automobile sector. Our fleet of self-driving cars was the most efficient and safest in the world. Our mandate changed over the years, and today it is very specific. We’ve moved out of the auto sector and into aerospace, exploration, and development. We’re working toward the next phase of transition.” The next phase of transition, I repeat. So, like, space? The government sent you here? That’s a government car out there.

“Yes and no. If you follow the news at all, you might know that OuterMore is a joint assembly. A partnership. We have a branch in government, hence the car, and roots in the private sector. I can show you a brief introductory video about us.”

He removes a screen from his black case. He holds it up with both hands, facing it toward us. I glance at Hen. She nods, signaling to me that I should watch. A video plays. It seems typical of government-style promotion—overly enthusiastic and forced. Again, I peer at Hen. She appears uninterested. She’s twirling a lock of hair around her index finger.

The images on the screen move from one to the next quickly, too fast to discern specific details or glean intent. People smiling, people engaged in group activities, laughing together, eating together. Everyone is happy. There are several images of the sky, the launch of a rocket, and rows of barrack-style metal beds.

When the video ends, Terrance tucks the screen away in his bag.

“So,” he says. “As you can see, we’ve been working on this particular project for a long time. Longer than most people realize. There’s still a lot to do, but things are progressing. The technology is quite impressive and advanced. We just received another significant surge of funding. This is happening. I know some of this has been in the media of late, but I can tell you that it goes much deeper than what’s being reported. This is a long time coming.”

From FOE, by Iain Reid. Used with the permission of the publisher, Gallery/Scout Press. Copyright © 2018 by Iain Reid. 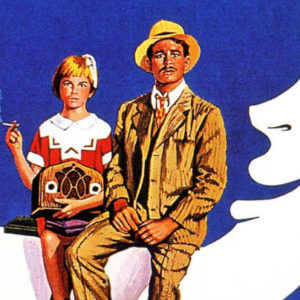