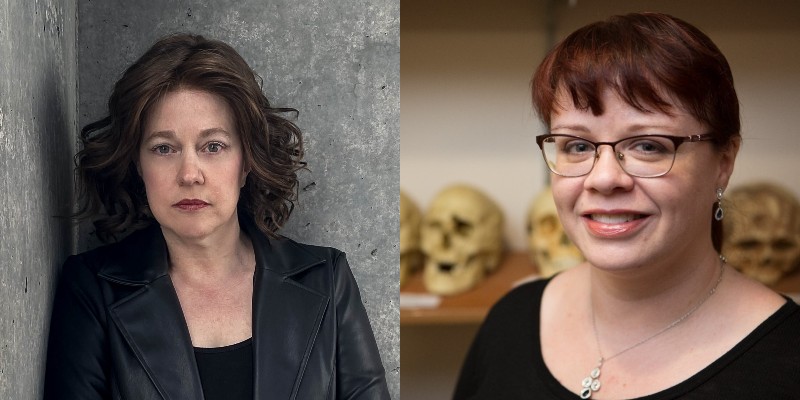 Evie Hawtrey talks with Dr. Cassandra Kuba about her career in bones (and also her consulting work on Bones)

Doctor Cassandra Kuba is a PhD biological anthropologist, and a university professor focusing on the study of the human skeleton (osteology). She is a forensic consultant—an expert on-call with police, at the ready to analyze human remains. Dr. Kuba also helps creative types—television script writers, crime novelists—get their forensic and procedural matters right. She’s consulted on TV crime dramas including the long running series CSI, and Bones.

Today I have the pleasure talking with Dr. Kuba about her experiences with crime, real and fictional. (Hawtrey is the author of the new novel, And by Fire.)

Evie Hawtrey: Welcome Cassandra! Let’s start with the real-life nitty gritty. When did you work on your first case involving a dead body?

Dr. Kuba: It was in November 1994, first day of deer hunting season, a typical time for bodies to be discovered in Pennsylvanian woods. It was my sophomore year in undergrad.

The deceased was a young adult female with a known history of attempted suicides.  Something that struck me, while waiting in the coroner’s office before heading to the scene, was a county map on the wall. There were colored pushpins coded to indicate different deaths and if homicide, suicide, natural, etc. There were a lot of suicides on that map.

My second case, involving three bodies, was two days later. That one was a double-homicide suicide. A father murdered his daughters before taking his own life. Because of the terrain, I had to lie on the ground alongside one of the skeletons to collect data for the crime scene maps. Reaching across the victim, while lying face to face with her, felt like a partial hug, almost as though I was letting her know I was sorry this had happened.

Hawtrey: Wow! That’s a lot to handle for a student who was only nineteen or twenty years old.

Dr. Kuba: Yes, four skeletons in one week was a rather abrupt initiation into this field and it certainly challenged me to consider whether I was cut out for this line of work. I have never regretted my ultimate decision to go forward with forensic anthropology.

Hawtrey: What kinds of questions can a forensic anthropologist help answer about a corpse?

Dr. Kuba: Here in the US, forensic anthropologists are typically called in when the body is either badly decomposed or significantly altered due to trauma or fire. Essentially, we are asked to assist when the typical autopsy and methods of visual ID cannot be performed, or when a detailed analysis of skeletal injury is needed

Our initial analysis will include estimation of the deceased’s biological profile, which includes information such as age, sex, and stature. We assess for signs of illness or injury, which includes what might have happened during the person’s lifetime and those possibly linked to why and how the person died. We also ferret out facts telling the story of what has transpired since the person died. All of this is focused on achieving a positive identification of the individual and figuring out how long the person has been dead.

Hawtrey: What’s the toughest part about looking down at a collection of human remains?

Dr. Kuba: As a forensic scientist, I know I need some degree of emotional distance for self-preservation. But I can’t help but to connect with the dead as a fellow human. As I analyze remains, I am getting to know these individuals at a very personal level. Studying someone’s bones, I can tell if their right knee likely ached when the weather changed, or if they had a habit of grinding their teeth. The child lying in front of me had new teeth coming in, which leaves me imagining he might have been a bit fussy, or perhaps had enjoyed laying down with her head tilted to one side more than the other.

It’s helpful for me to include the before death elements of the deceased while I work—what these people’s lives were like—even though I know, ultimately, I need to dive deeply into their deaths. The ugly fact that their lives were cut short and the knowledge that humans can be so cruel to other humans, those are very difficult things to bear witness to. But those same brutal truths also help motivate me to push through the nastier aspects of the work that I do.

Seeing the human remains as people who deserved better reminds me that they have family, friends, and community members who want answers and should have those answers. Ultimately, my desire to help provide that closure allows me to face the task at hand.

Hawtrey: Can you give readers an example of a change or two in science that has improved forensic analysis and the difference they make in identifying bodies or solving crimes?

Dr. Kuba: The continued refinement of DNA analysis amazes me. One development impacting the identification of perpetrators and victims alike, though, is basically the side effect of a hobby. Law enforcement now has access to a vastly expanded DNA pool for their forensic genealogical analysis thanks to the ability to compare forensic samples from unsolved crime scenes with sequences of individuals who paid to have their DNA analyzed by a company because they were curious about their family history. That’s astounding…and, I am sure, a bit unsettling to folks, too.

I received a DNA analysis kit as a Christmas gift several years back. That doesn’t make me nervous because while I may write crime, I don’t commit it. But I have to admit, if some distant relation turns out to be a bad-actor I’ll be genuinely delighted if that spit I mailed off in a tube helps to catch him.

Dr. Kuba: Another example I can think of is the use of stable isotope analysis in forensic investigations. The chemical signature of your teeth can tell us where you grew up during childhood and early adolescence. If we have baby teeth from a victim, they tell us where the child’s mother lived while pregnant. I suggested this technique to a detective who asked me about a cold case. I do not do this type of analysis myself, so I suggested people he could reach out to. In the end, the victim’s teeth helped the detective to figure out where that little girl was from.

Hawtrey: That’s amazing! I find myself wondering, as the science used to determine the identities of victims and perpetrators improves, are criminals upping their game?

Dr. Kuba: It is a bit of a competition—can science and detective work stay ahead of the criminal game? The good news is destroying a body to the point that there is absolutely nothing that forensic science can assess is not easy to do. I mean, people are certainly aware that teeth and fingerprints are very important in positive identification, and a smart killer will be looking for a way to make those unavailable, but we forensic folks have more tricks up our sleeves to help with identification.

I recall a case, from Florida, I believe, where a man killed his wife. He pulled out her teeth and cut off her fingers, but he forgot about her breast implants. Apparently, he did not know—and most people likely don’t—there are serial numbers on breast implants. Those numbers on the implants of this unfortunate woman were used to identify her body, and the police had enough evidence to link her murder to the husband.

Hawtrey: What has motivated you to share your forensic science expertise with creators of fictional crime dramas?

Dr. Kuba: When the TV series Bones first aired, I didn’t plan on watching it, thinking that it was likely to botch its portrayal of forensic anthropology, making the science I love into a farce. But I gave it a try and soon got interested in watching it with a critical eye, seeing how accurate the science was in a fictional world. It wasn’t until the 8th season that I was contacted, asking if I could help answer questions that the writers had. I didn’t respond right away. I just wasn’t sure how I felt. But I came to see that helping the show’s writers could allow me to have some impact on how real science was adapted to fit the needs of television.

Hawtrey: Can you offer us an example of a common forensic misrepresentation you see in fictional crime dramas?

Dr. Kuba: There are a few I often mention to my students.

Fiction gives forensic anthropologists several roles they don’t have in real life. We do not determine cause of death. We advise on the particulars of the injuries and leave it to the medical examiners or coroners to decide if that was enough to kill someone. And in the US, we do not get involved in criminal interrogations and rarely have direct interaction with suspects or the victim’s families.

Technology is often portrayed as more advanced or producing results that are easier to visualize. For example, ground penetrating radar, in its current form, does not provide nice crisp images that look like a buried skull or skeleton in the ground. In reality, we see lines and arcs in the profile slices we can watch in real time as we run the device. I wish real life mimicked television here!

Hawtrey: Obviously, your involvement with fictional crime helps improve the genre. Has your consulting work had any unexpected impact on your day job?

Dr. Kuba: It’s definitely impacted my teaching! My crime show work helped inspire an honors course, jokingly referred to as my Murder Class. Essentially my students play the role of writers, brainstorming episode ideas for fictional crime shows I come up with. They break into teams and alternate between being the writers and researchers. The “writing” team explores cold cases, considering how to adapt them as an episode premise. They brainstorm research questions related to critical plot elements.The “research” team tries to find the necessary information and explain it at an appropriate audience level.  I believe the Murder Class helps test my research and critical thinking skills while benefitting my students in the same areas.

Hawtrey: That sounds like a blast! And I could easily see it turn into the plot of a novel when one of the student’s imagined scenarios results in murder. Which makes me wonder have you ever thought of writing a mystery novel yourself?

Dr. Kuba: I have, but my full-time job gets in the way. I always think that when I finally have a calm summer, I’ll put pen to paper. I’ve thought about a series centered on a female grad student in forensic anthropology, her experiences learning the ropes, the cases she works on and the scrapes she gets into. And before you ask, no, this would not be semi-autobiographical. I am too tame to make for exciting reading.

Hawtrey: We will have to agree to disagree on that one Cassandra. It’s been a pleasure, and I hope you write that novel. I want a signed copy! 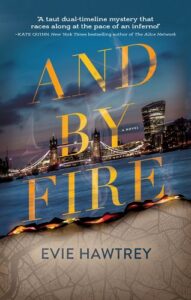 Crime novelist Evie Hawtrey is a Yank by birth but a sister-in-spirit to her fierce and feminist London detective, DI Nigella Parker. Evie splits her time between Washington DC, where she lives with her husband, and York, UK, where she enjoys living in history, lingering over teas, and knocking around in pubs. Evie’s dual-timeline mystery And by Fire releases May 10th with Crooked Lane books. 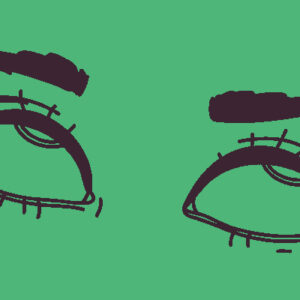 Serial killers and cult leaders. I’m not sure how many times I’ve Googled either of these true crime sub-categories in conjunction...
© LitHub
Back to top