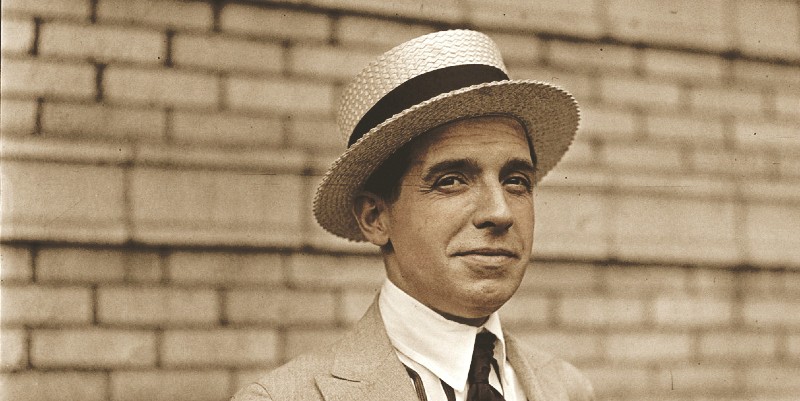 In 1920, Boston’s Charles Ponzi gave a classic confidence trick its name. Why are investors still falling for such a notorious swindle?

The office door bore an impressive name—the Securities Exchange Company—and during the first seven months of 1920, it made the Niles Building at 27 School Street one of the busiest addresses in Boston. A steady stream of people turned up with wads of cash, convinced they would soon strike it rich.

They were scrambling to invest in something few of them had ever heard of, let alone seen—international postal reply coupons, slips of paper that post offices would exchange for stamps. These certificates enabled someone sending a letter to include return postage when seeking a response from a recipient in another country. Currency exchange rates were in flux after the Great War, and the founder of the Securities Exchange Company claimed enormous profits could be made when coupons purchased with undervalued liras or francs were redeemed in the United States.

How much profit? Investors were assured they would double their money in just 90 days. The notion of such quick and lucrative returns was as ridiculous then as it sounds now, but thousands of people—from poor immigrants to businessmen who should have known better—collectively poured millions of dollars into the scheme. Bostonians felt blessed to have a financial wizard in their midst, a man who knew how to make easy money and was willing to share the secret with the masses. A charming, slick-talking man named Charles Ponzi.

A century ago this month, Ponzi’s house of cards collapsed when the Boston Post revealed he was a convicted forger and the U.S. Postal Service confirmed that no one was exchanging postal reply coupons in the massive volumes needed to generate his promised, sky-high profits. Ponzi had been using the money pouring in from new investors to pay interest to earlier investors, and the revelations cut off the cash flow needed to keep the scheme afloat. He was charged with theft and mail fraud. Much of the money he had raked in—at least $10 million, almost $100 million US today—had vanished.

Ponzi’s “financial alchemy,” notes his biographer, Mitchell Zuckoff, “would mark the first roar of the 1920s,” a decade of investor-mania and stock market gambling hurtling toward the Wall Street crash of 1929. He was not the first con artist to use the rob-Peter-to-pay-Paul scam. But his audacious fraud gave it a new name.

The man whose name has become synonymous with fraud was born in Italy in 1882 and emigrated to the U.S. when he was twenty-one. He bounced from job to job—everything from washing dishes to repairing sewing machines—before landing a job as a clerk at a bank in Montreal. Caught forging a check, he served a 20-month term in a Canadian prison. While crossing back into the U.S. after his release in 1910, he was charged with trying to smuggle in a group of undocumented Italians and sentenced to two more years behind bars. He finally settled down in Boston, found work as a clerk and married. But Ponzi wanted more—cursed, his wife later lamented, with “the tastes of the millionaire,” he was determined to find a way to make a fortune.

He began selling a directory that promoted local merchants and one day in 1919, while checking his mail, he spotted a coupon he had been sent to cover return postage to Spain. He thought about the exchange rate and an idea “fell in my lap like a ripe apple,” he noted in his memoirs, a “shortcut to some easy money … it took me less than five minutes of figuring on a scratchpad to realize its possibilities.”

In late July 1920, at the height of the frenzy, Ponzi raked in a jaw-dropping $1 million in a single day.

When a bank balked at loaning him money to back his dubious scheme, he set up his company and began selling shares. Early customers turned a quick profit, boasted about their good fortune to friends, and word spread quickly. Ponzi hired salesmen and opened branch offices from Maine to New Jersey. Many customers were Italian immigrants who entrusted their countryman with their lifesavings. Three-quarters of Boston’s police officers, it was said, were investors. A banker from Kansas ponied up $10,000. In late July 1920, at the height of the frenzy, Ponzi raked in a jaw-dropping $1 million in a single day. And he lived a millionaire’s lifestyle, driving into town from his suburban mansion in the back of a chauffeured limousine.

Doubters soon burst Ponzi’s bubble. How could this upstart deliver a 400-percent annual return at a time when banks typically offered depositors a modest—and far more realistic—five percent interest a year? Ponzi was not about to reveal his secret. “I told just enough to whet people’s greed and curiosity,” he recalled. “Nothing more.” Massachusetts officials and newspapermen began to question his claims; the knock-out punch was a front-page Boston Post story, published on August 11th, revealing his criminal record for fraud. Investors panicked and demanded their money back. Two days later—fittingly, Friday the thirteenth—Boston’s financial wizard was behind bars.

Ponzi’s scheme was nothing new. Decades before him, swindlers were touting high-yield, sure-thing investments to reel in the suckers, then looting the money flowing in to pay interest and create the illusion of profit. The scams stayed afloat for as long as the con artist could keep enough new investors pumping in new money.

In 1878 Bostonian Sarah Howe opened a private bank, promised to pay interest of eight percent a month, and enticed more than a thousand women to deposit their savings. The former fortune teller-turned-banker took in a half-million dollars and lived well on the proceeds until the scheme collapsed. A few years later, Chicago promoters offered huge profits to investors in their mysteriously named “Fund W,” paid back some of the money as interest and absconded with the rest.

Then it was bookkeeper William Franklin Miller’s turn. In 1899 he launched the Brooklyn-based Franklin Syndicate and claimed to have discovered insider secrets for playing the stock market. Investors would earn a whopping 10 percent on their investments every week, more than quintupling their money within a year. The outlandish claim worked and the man who became known as “520 Percent” Miller was soon pocketing an average of $80,000 a week. He fled to Canada with $2 million but returned to face charges, and was sentenced to ten years in prison.

But none of these early peddlers of fake investments could match the imagination and chutzpah of Leo Koretz, a Chicago lawyer who ran a succession of schemes, each one paying interest using fresh investments, for almost two decades. He sold fake mortgages, then claimed to be making a killing in Arkansas rice farms. But his masterpiece was the Bayano Syndicate. Koretz dreamed up this shadowy group of millionaires in 1911, claimed they controlled valuable timberland in a remote corner of Panama, and began selling shares in this tropical bonanza. By the early 1920s investors were earning an astounding 60-percent annual return on their investments. When Koretz needed more money to meet the hefty interest payments, he simply announced that the Syndicate had struck oil on its land and would soon be one of the largest petroleum companies on the planet; a flood of new investors begged him to take their money.

American securities regulators uncovered 60 of the schemes in 2019 alone, funded by a staggering $3.25 billion from investors.

Not even Ponzi’s spectacular flame-out in 1920 could shake the confidence of Koretz’s loyal followers—they began calling him “Our Ponzi,” unaware the joke was really on them. As much as $400 million, in today’s terms, flowed into Koretz’s various schemes before he skipped town in 1923. And his success, combined with Ponzi’s notoriety, inspired future generations of imitators. Wikipedia lists dozens of major Ponzi schemes that have been exposed since 1980, culminating in Wall Street fund manager Bernie Madoff’s spectacular $65-billion default in 2008. American securities regulators uncovered 60 of the schemes in 2019 alone, funded by a staggering $3.25 billion from investors.

Why do so many people—including many with experience in business or investing—continue to fall for Ponzi schemes? Tamar Frankel, a law professor in Ponzi’s hometown of Boston, has studied the schemes and identified patterns. Promoters offer high returns, no matter how implausible (one 2011 scheme she cites promised to double investors’ money every month) to catch a potential victim’s attention. The investment itself is touted as something new and lucrative—one scam featured synthetic rubies, for instance, while another was based on a cheaper process for refining gold. Canadian authorities recently exposed the failed cryptocurrency trading company QuadrigaCX as a classic Ponzi scheme that cost investors $125 million. Bitcoins supposedly stored in online “wallets” proved to be as fleeting as postal reply coupon profits and pipe-dreams of Panamanian oil.

Once a client is hooked, the swindler’s powers of persuasion—and the victim’s urge to get in on the ground floor of a sure-thing—can be irresistible. “Warnings against fraud and lists of red flags,” notes Frankel, “seem to offer little protection against treacherous charmers.” Investors who jump in early enough reap the promised returns and may even recoup their investment, and their success offers a further inducement to latecomers. But the pool of potential investors is bound to dry up at some point, no matter how skilled the swindler or alluring the investment, leaving most victims in the red. By the time Ponzi’s scheme collapsed, two-thirds of the money invested was gone.

Unlike a traditional, short-lived con game, where the fraudster finds a dupe, grabs the money and runs, Ponzi schemes take time to build and come with a best-before date. “The fatal weakness of the scheme is that you cannot stop,” journalist Garet Garrett noted in the 1930s. “When new creditors fail to present themselves faster than the old creditors demand to be paid off, the bubble bursts. Then you go to jail.” As did Ponzi (who eventually took a stab at selling worthless Florida swampland) and Koretz, captured in 1924 after a year on the lam in Canada.

A century later, Ponzi’s name—and the fraud he made famous—lives on. And the reason is not only the endless supply of con artists who can conjure up new ways to tease money out of pockets. What keeps the same time-worn scheme popping up, in new guises, is the folly and greed of the people it targets. “We are all gamblers,” Ponzi himself once noted. “We all crave easy money. And plenty of it. If we didn’t, no get-rich-quick scheme could be successful.”

The World of Robert B. Parker's Spenser and the Birth of the 1970's Private Detective 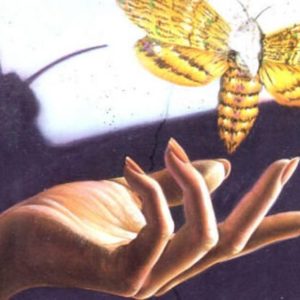 I decided to invite Thomas Harris to my house around Day 24 of the pandemic. Outside, the world was exploding. Inside, my writing...
© LitHub
Back to top