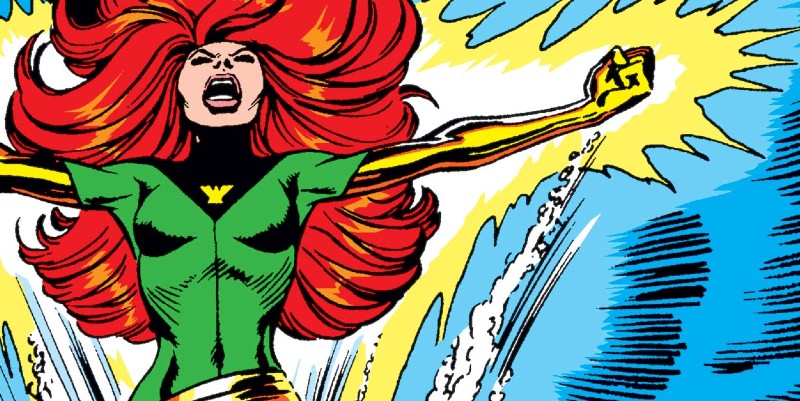 By any standard, Chris Claremont’s original, 17-year run as writer of the X-Men comic book series is legendary. During his time steering the lives of Marvel Comics’ band of outlaw mutants, Claremont managed to not only work with a who’s who of amazing artists—like John Byrne, Paul Smith, Dave Cockrum, John Romita Jr., Marc Silvestri, and Jim Lee—he also elevated the superhero narrative to that of an epic novel, weaving the stories of dozens of characters over a decade-plus of battles, deaths, relationships, and more.

While at first blush Claremont’s literary superhero epic veers far from the gritty, street-level turf of crime fiction, the scribe is no stranger to the genre’s basic elements. In fact, some would suggest—as I have—that arguably his most lauded stories, “The Dark Phoenix Saga,” is really a long spotlight piece on one of the medium’s most evocative femmes fatales—Jean Grey, the aforementioned Dark Phoenix.

The Dark Phoenix Saga focuses on the telepathic/telekinetic Grey nee Marvel Girl, one of the original, founding X-Men, who up until then had been portrayed as a mostly two-dimensional way, the bland foil to her male counterparts. That wouldn’t fly with Claremont, who’d made a name for himself as a write not only for his complex, mature storylines, but his desire to bring his female characters to the forefront—as fully-formed, complicated people. Jean Grey was no exception.

In the wake of the historic Giant-Size X-Men #1, which saw a new roster of mutants brought under the influence of team mentor Professor Charles Xavier, only one original team member remains—the stoic, insecure Cyclops. The other originals, including Beast, Angel, Iceman, and Marvel Girl, move on. Jean Grey returns to the fold as an auxiliary member of sorts, having rekindled her affair with Scott Summers/Cyclops.

What follows is a nontraditional superhero opus, as Marvel Girl risks her life for the new X-Men team and is briefly believed dead, only to rise from Jamaica Bay imbued with power beyond her wildest dreams, rebranded Phoenix—a woman encased in flames, rising from the ashes.

But power comes with a price, and as Claremont and artist John Byrne unfurl their at times cosmic, at times painfully personal story, we see a woman pushed to the brink—manipulated by dark forces and tempted by the depths of her new, god-like powers. Finally driven over the edge by the mental torment of classic X-Men villain Mastermind, masquerading as Jason Wyngarde, of the aristocratic cabal known as The Hellfire Club, Phoenix fully embraces the dark side, going from demure damsel in distress to a full-on femme fatale. Pretty damn noir, eh?

Though Claremont accepts the thesis that Dark Phoenix is, in many ways, in tune with the femme fatale trope, he’s not sure it’s totally apt.

“I’m not sure I would consider her a femme fatale. That actually is more Mystique’s side of the ledger,” Claremont said, referring to the blue-skinned, shape-changing mutant villain he’d introduce a bit later in his run. But the writer cannot deny the influence he and initial X-Men series artist Dave Cockrum had in reshaping Jean Grey—moving her from soft-spoken B-list heroine to full-on goddess.

“The fun with Jean for example was that when I first took over X-Men, Jean was a relatively two-and-a-half-dimensional character,” Claremont said. “What you had there was essentially unchanged from what [X-Men co-creator] Stan Lee had introduced years before. And we wanted to, I think, rough things up a tad but in the process, explore her more.”

Even that early on in his run on the book, Claremont knew he had plans for Jean Grey, which may have been one of the reasons he sent her, along with the other original members, off the stage for a beat. The Jean Grey that returned was different in spirit and look.

“When she left the book in X-Men #94, she looked so traditionally Republican it was boring,” Claremont continued. “And when she came back in #97 she suddenly—for one—discovered modern fashion, at least modern fashion in a late ’70s perspective.”

Almost immediately upon Jean Grey’s return to the team, Claremont and Cockrum test her mettle, and a new character is born after a death-defying space shuttle craft, in the form of Phoenix. The challenge for the team was to achieve the expectations of the form while still injecting it with something new and different.

“‘How’s the hero gonna win?’ Even in the old days, you knew the hero had to win, so you had to be creative about it,” Claremont said. “You have Jean end the issue by saying, ‘The space shuttle’s damaged, they’re in the middle of the deadliest solar flare in living memory. How often have I seen that scene in a movie? How’s she gonna do it?’ Well, she absorbs from Peter Corbo, how to fly a space shuttle…and then she flies the shuttle. And you don’t know what happens until, I guess, six pages into the crash at JFK Airport.”

What rises from the waters is a very different Jean Grey. Marvel Girl is gone. In her place is Phoenix, an all-powerful version of Jean Grey that immediately elevates the character to the upper reaches of the Marvel comic book universe. And while at heart, Phoenix is still Jean Grey, she now wields a set of powers that would make characters like Thor blush. She’s a goddess, but can she handle it? That’s the heart of the Dark Phoenix Saga, a tale of a woman gifted great powers, and her eventual corruption and subsequent redemption. Or is it?

“She wasn’t corrupted,” Claremont said. “At least not in my interpretation/presentation of the character and the concept. The Phoenix exists one small step below the creator, why? In her initial integration with the Phoenix she embraced the first three words of Stan Lee’s classic line, ‘With great power…’ Well, she had power at this point that was only a half step below the Almighty. And she could handle it, kinda, and what was the plus side of that? The downside was, she was not in possession yet of the total maturity needed to wield that power. I guess the metaphor would be, when Jean Grey becomes the Phoenix, she becomes to us, as we are to the amoeba beneath our feet, in the ground, as we’re walking across a stretch of beach.”

Corrupted or not, Jean Grey does find herself susceptible to the illusionary powers of Mastermind, who manipulates her in an effort to gain entry into the upper-class world of the elite Hellfire Club. But like many before him, Mastermind had underestimated his opponent – and the fallout that would ensue.

“She had her powers under control until Mastermind came out and gave her a vision of what the temptation, the dark side would be like,” Claremont said. “He was dealing with her as simple, sweet, impressionable, seducible Jean Gray without the slightest awareness of her power. He was treating her like a normal superhero. ‘Not a problem, I’ll just corrupt her and give her a wicked costume and we’ll have fun.’”

Needless to say, it didn’t work out as Mastermind had planned—with the newly-Dark Phoenix performing a telepathic lobotomy on the villain and fully embracing the role of femme fatale: a deadly, empowered, and fearless woman with nothing to lose. Driven mad by her evolution, Dark Phoenix’s defining moment, when she destroys an entire alien star system, was a testament to both her sheer power and how far she’d evolved from the shy, supporting character Jean Grey once was. 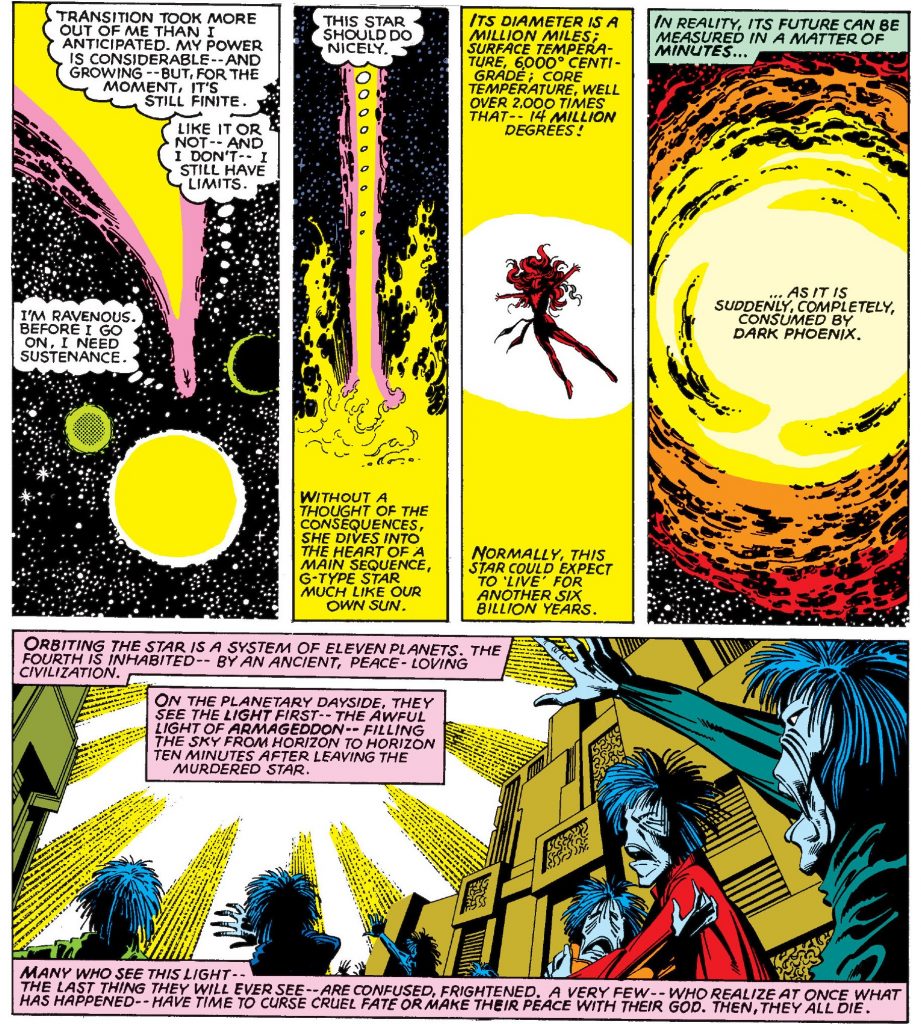 “When she ate the D’bari sun, she had no conscious awareness that there was an inhabited planet there. All she knew was, ‘Oh, a snack. Thank God, I needed some food,” Claremont said. But this would just be a sign pointing toward the story’s epic finale, on the moon, with the X-Men squaring off against the Shi’ar Empire’s powerful Imperial Guard for the life of their corrupted teammate. It’s only then, in the story’s final pages, that the reader begins to realize how things might end—how they have to end. “That’s why in the next to last page of #137, where Scott’s saying, ‘We will find a way.’ And Jean says, ‘I get it, we may well find a way, but that would mean I would have to stay in absolute conscious control of my existence for the rest of what I fear is my immortal life. And if I make the slightest mistake, if one person dies because of me, that’s too much.’”

But Jean’s suicide was not always the plan. In fact, Claremont and series artist John Byrne had submitted an alternate ending, which saw Jean Grey depowered, the Phoenix persona gone. But then-Marvel Editor in Chief Jim Shooter felt the story was a cop-out, especially in the wake of the billions of alien lives Dark Phoenix had destroyed. A price had to be paid. So the decision was made: Jean Grey must die.

Article continues after advertisement
“My first draft was not that, because we didn’t know we could do that. She’s Jean Grey!”

“It’s why Jean chose the alternative—dying,” Claremont said. “My first draft was not that, because we didn’t know we could do that. She’s Jean Grey! Her relationship with Scott/Cyclops is the second oldest romantic relationship in Marvel Comics—we can’t kill her. On the other hand, she is a mega-murderer, she killed seven billion people. It was an accident, but she still did it. There has to be a balance. And that’s why Jean pulled the plug on herself. That’s why the story became what it really should have been from the start, a tragedy, a classic tragedy, not a super hero story.”

While Claremont wouldn’t classify the Dark Phoenix Saga as a mystery, per se, he does take some joy from the genre—and is an avid fan of Laurie King’s Mary Russell novels, to name one.

“As a reader, I enjoy complex character mysteries. [Laurie King’s novels] tell the story of an older Sherlock Holmes, who’s married to this young woman in the 20th century,” Claremont said. “They first meet at the end of the 19th century and they get together and move on, and he’s like, as one can imagine, in his 70s, and she’s in her barely 20s, so it’s very much a December-April romance. They’re really good mysteries. I’m also fond of things like The Maltese Falcon and Dashiell Hammett. I hate to say it, but I enjoy Mickey Spillane in certain respects, too.”

But Claremont tends to throw genre trappings out the window when it comes to what stories engage him. It’s about the people first, the structure and classification a distant second.

“I’m not that much of an aficionado of mystery per se,” Claremont said. “What I find myself consistently intrigued by is character—how these people interact, what kind of challenges get thrown in their way, what they do to resolve mysteries, overcome challenges, learn something about themselves, all aspects that I’ve tried to bring to all my work whether prose or comics. But as far as comics are concerned, like mysteries, what remains is the idea that nothing is quite what it looks like when you first see them.” 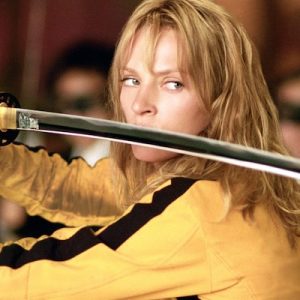 It’s not easy making readers sympathize with a serial killer, but Jeff Lindsay manages to do just that. Dexter is psychologically...
© LitHub
Back to top