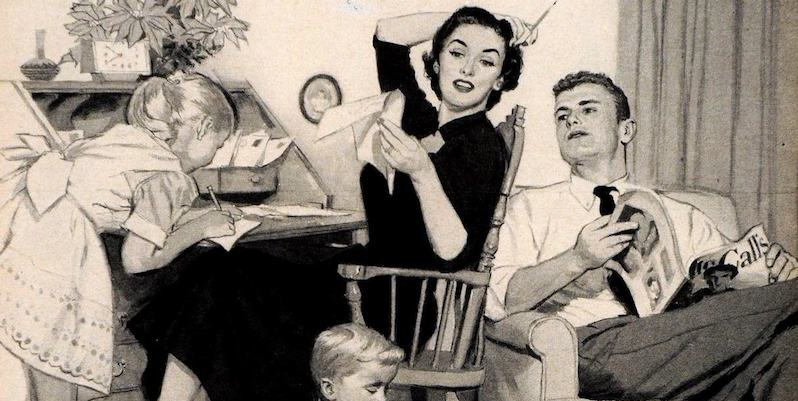 Everything you wanted to know about changing diapers and solving fictional murders but were afraid to ask.

There’s a romantic vision of writing that most non-writers have. They envision the solitary writer sitting in dim, moody lighting in front of a large, polished desk (likely some sort of expensive, dark wood), gazing out a window that overlooks a forest, a quiet stream, a mountain range, or a jaw-dropping sunrise. The writer’s desk is covered (neatly!) with papers, manuscripts, photos, and emotionally resonant heirlooms (say, a framed pair of Mark Twain’s glasses purchased at Christie’s). The writer likely has a drink close at hand: coffee if working in the morning, a glass of wine or an aperatif at night. They write in silence, their churning imaginations the only sound.

As the kids say these days: LOL.

If you’re a writer with children, you’re most definitely not listening to a running brook, chirping birds, calming crickets, or even a curated Spotify playlist as you hunt and peck at the keys. You write chapters in between changing diapers. Calming tantrums. Preparing food. Scheduling doctors appointments and playdates and doing everything you can to keep the small humans who have taken over your life alive.

I began writing my new novel, Hide Away, a few months after our first daughter was born. My wife and I read all the baby books, painstakingly decorated her nursery, and stocked our apartment with enough diapers and ointments to film several Cheaper by the Dozen sequels. But as any new parent can tell you, nothing truly prepares you for having a child. It’s the difference between reading North Dallas Forty, and lining up under center while several angry 300-lb lineman try to decapitate you. And writing a book with an infant at home is like trying to play Bach in the midst of a typhoon.

“It feels like there are never enough hours in the day to do everything well,” says Jennifer Hillier, Thriller-award winning author of Jar of Hearts and Little Secrets. “So it’s a daily struggle to decide what actually needs to be done well, and what I can get away with half-assing. Which means, if I’m on deadline, we might be eating chicken fingers for the third night in a row and putting The Wiggles on TV so I can find an hour to write.”

As soon as our daughter, Ava, came into the world, she became our world, especially after we’d endured the agonies of infertility. Having a happy, healthy child was a legitimate blessing. But it meant that every moment I spent writing, rather than with our daughter, also came with a deluge of guilt.

Having a happy, healthy child was a legitimate blessing. But it meant that every moment I spent writing, rather than with our daughter, also came with a deluge of guilt.

“The hardest part about balancing parenthood and a writing career is the guilt around my time,” said Vanessa Lillie, author of Little Voices. “Writing is a game of numbers for me, and the more time I spend at the keyboard, the better my work and how I feel about myself. The problem is that my child would happily take every waking hour. That’s a difficult tension. With each book event or conference I attend, I feel guilty for choosing my work over my child. For each book event or conference I miss, I feel guilty for not prioritizing my career.”

Adds Wendy Heard, author of Hunting Annabelle and The Kill Club, “The scheduling juggling act is truly the most challenging organizational endeavor I can imagine. I’ve had to sacrifice a lot of personal interests and goals to make writing, parenting, and working happen.”

And as every author knows, part of the responsibility of being a published writer is also being a supportive member of the literary community. But once you add kids to the mix, it’s not always possible.

“I used to go to book launches and events all the time,” says Alex Segura, author of the Pete Fernandez series. “It was a way to engage with the writing community and, from a more career-minded perspective, get your face out there. With two young children and a full-time job, it’s just not feasible. That’s why I try to host authors at the great indie bookstore near us, and I try to manage my schedule better. I can’t say yes to everything, because I have a greater responsibility.”

One of the added wrinkles is that, as crime writers, it is literally our job to describe terrible horrific deeds, often in gruesome, painstaking detail. We spin tales of violence, depravity, murder, and mayhem. So how does one reconcile writing about the darkest aspects of humanity while trying to raise children in the light?

Says Julia Dahl, award-winning author of Conviction, “My son is four and though he doesn’t know I write about murder, he does know that I have a dark sensibility. We talk about death carefully, but we talk about it openly. I don’t want him to go through life afraid. Our cat died last month and, instead of being really freaked out, he was steady through his sadness. Whether that’s because we’ve talked about death or just because of his temperament I don’t know, but I felt proud of the way he handled it.”

Adds Heard, “Being in an environment of kid-appropriate content makes me grateful to have an outlet for the darker side of my personality. Writing crime fiction is a way to remind myself that I haven’t lost my edge and become a vanilla, mom-jeans-wearing suburbanite…not all the way.”

Before my daughters were born, I watched innumerable movies and films and read books about children in peril without experiencing much of any emotional attachment. Without children of my own, I couldn’t fully understand the terror and agony of having a child in danger. But I also could not have written Hide Away before becoming a parent, as the bond between Rachel Marin and her two children, and how she deals with the traumas of their shared past, needed to come from an emotional place that did not exist in me before kids. Nothing terrifies me more, now, than one of my own children being in harm’s way, and writing about imperiled children hits me in a way it did not a few years ago.

Says Kathleen Barber, author of Truth Be Told, “Before my son was born, I was contemplating a possible novel that would center around the kidnapping of an infant. Now, that idea is so gut-wrenchingly horrifying to me that there’s no way I could spend months working on a novel like that. I can barely read books in which children in peril these days!”

“Little Secrets, which is coming out in April, opens with the abduction of a four-year-old boy,” says Hillier. “When I wrote it, my little boy was four, and I always write about the things that terrify me the most.”

But as any parent can tell you, the chaos of writing with kids often leads to the most memorable moments—emotional, chaotic, and comedic. When I open my laptop, our oldest daughter, 32 months, runs up to me, says, “Daddy I want to type!”, then promptly climbs onto my lap, grinning ear-to-ear, and proceeds to pound out sentence after sentence of adorable gibberish.

Says Daniel Palmer, aka D.J. Palmer, author of The New Husband and Saving Meghan, “I had a home office when my kids were little, and I was thinking about trying Dragon Naturally Speaking software to speed up the workflow. So I borrowed a device from a friend to try it out and the session went something like: ‘The killer opened the door slowly and…no, you can’t have ice cream for dinner…he took his knife out and…your tooth is wiggly? Which one? No…that’s not very wiggly. You can’t pull it out with pliers, I’m sorry.”

But in addition to comedic moments  experiencing a career highlight with your child can make it even more special. “I brought my wife and son to Bouchercon in St. Petersburg,” says Segura. “Dangerous Ends was up for an Anthony Award, and I vividly remember sitting at our table during the ceremony and watching my son, who was almost three at the time, playing Legos with Jon Jordan, one of my oldest friends in the crime fiction world. It just warmed my heart. And it kind of put this whole journey into context.”

And while writing, for many, is a therapeutic exercise, occasionally your books can help other children deal with their trauma. Says Palmer, “I wrote a novel called Forgive Me, which explores how young people get groomed for sex trafficking. After publication, I found out a rehab facility in Minneapolis was using the book as a reference tool to help girls leave that life for good. One of my proudest moments in the business.”

It can also be a tremendous joy to have your child share the most memorable moments of your writing life. As every debut author knows, the first time you open a box of your own books is a magical experience. “Unboxing” videos have become increasingly popular…but sometimes they don’t go according to plan.

Says Lillie, “The unboxing video with my son was a little bit of a disaster. I was so excited to hold the copies in my hand, and share that moment with him (to whom I’d dedicated the book), but he wasn’t having it. He called the book ‘weird’ and ‘scary, scary’ and said he didn’t like it. I’m always glad to make others feel better about their unboxing videos going much better than mine. “

And sometimes parenting as a crime writer can literally lead to health hazards.

“Once I was on a phone call with my agent,” says Heard, “and my five-year-old daughter was in the bath, eating froyo. She stuck her finger through a hole in the handle of the spoon, got it stuck, screamed for me, at which point I realized her finger was turning purple and I had to take her to urgent care, where they had to solder the spoon off her finger.”

And if you still have that purely romantic notion of being a writer in your mind, just talk to Kathleen Barber. “I was scheduled to read at a Noir at the Bar when my son was about four months old. We’d never left him with a babysitter before, and so we decided to just take him with us. He handled it like a champ … until there was a diaper incident.” 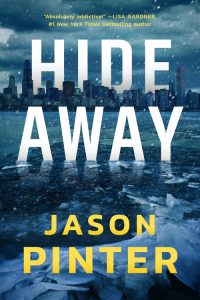 Jason Pinter is the author of seven thrillers and two children’s books, as well as the Founder and Publisher of Polis Books. His latest novel, Hide Away, is now available from Thomas & Mercer. Visit him at www.JasonPinter.com and follow him at @JasonPinter. 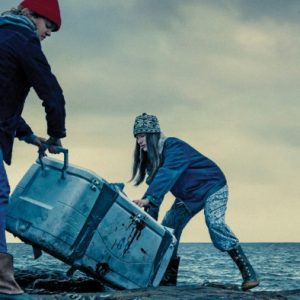 We're entering into a somewhat dizzying phase of pop culture consumption, and even if you come to your regular viewing-habits...
© LitHub
Back to top