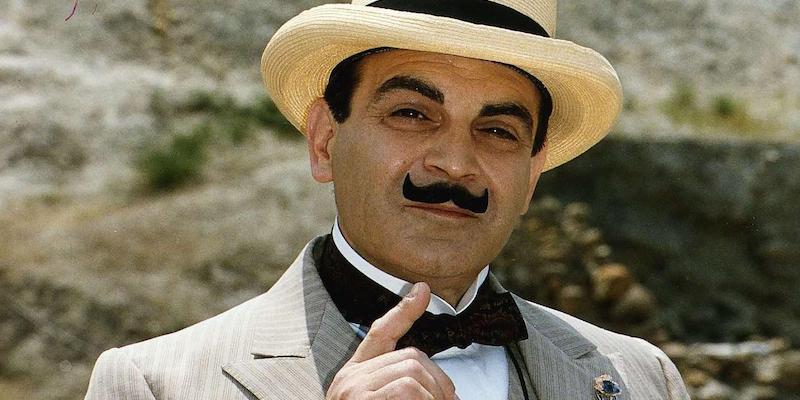 "A series in which the protagonist ages with the years becomes in effect a long novel, the record of a life..."

How old is Hercule Poirot?

Good question. In his first published case, The Mysterious Affair at Styles, which takes place during the First World War, we are told that he is retired from the Belgian police. So he was already elderly by the 1920s and 30s, when most of his classic cases occurred. And yet here he is in 1966, in the Third Girl, passing judgment on the youth fashions of the day: Anyone of Poirot’s age and generation would have had only one desire. To drop the girl into a bath as soon as possible. At this point he would have been retired from the Belgian police for… at least fifty years. Using evidence from the books, H.R.F. Keating once calculated that Poirot lived to be 130.

The truth is that Agatha Christie herself didn’t know or much care when Poirot was born and died; she knew that her readers wanted him at the center of the story, and they wanted him to be much as he always had been: fastidious, pompous and perspicacious. They wanted him unchanged as the world changed around him.

Much the same happened with Nero Wolfe, who irrefutably established the benefits of overconsumption and complete physical inactivity by remaining in the pink of health for fifty years while refusing to stir from his brownstone on West 35th. Rex Stout knew what Christie knew: readers want constancy in a series. We want Holmes to pick up the violin (or the syringe) when he is in one of his moods, we want Marlowe to set out the chessboard and pour himself a stiff one, we want V.I. to nip downstairs for a chat with old Mr. Contreras. The familiar is comforting in fiction just as in real life.

Of course, there are other things we might want in a series, like a convincing picture of how people change as they move through life, or as George Eliot put it, “how the mysterious mixture behaves under the varying experiments of Time.” What a lot of readers want from a crime series is a sense that the stories are rooted in real life. And in real life Nero Wolfe would have keeled over from a massive coronary about the time Dewey was defeating Truman.

A long-running series can cover decades, and if you like realism in your fiction, you’re going to want to see what those decades do to your hero. Even Holmes ages, finally retiring to his beekeeping in the country, and V.I. Warshawski gets older too, though slowly, through some kind of Einsteinian (or Paretskian) magic. A series in which the protagonist ages with the years becomes in effect a long novel, the record of a life, and who doesn’t like a big fat novel you can read in installments?

All this occurred to me on the occasion of a rare opportunity that came my way when a publisher proposed resurrecting a series of books I had written back in the nineties that had its moment and then expired. Twenty years had gone by, the paper editions were out of print and the e-books lost in the long tail, and I had given it up for dead.

The series featured Pascual Rose, a repentant ex-terrorist trying to go straight. John LeCarré’s The Little Drummer Girl had set me to wondering about those left-wing European youths in the seventies and eighties who got radicalized and drifted into terrorism, some with Palestinian groups and some with home-grown European outfits like the Red Army Faction or Action Directe. I wondered if any of those people ever had second thoughts and wanted out, and if so, where that left them for the rest of their lives.

That, I thought, would be a really interesting character. And so Pascual was born. In the three novels I published in the nineties, Pascual finds that terrorism is a tough business to get out of. Having turned informant for the CIA and Mossad, not only has he betrayed some very nasty people, but also he is now essentially owned by the agencies who debriefed him and provided him with a new identity. In each book somebody from Pascual’s past catches up with him and wants something.

The background of the series was the end of the Cold War and the breakup of the Soviet Union, with the old terror gangs mutating into organized crime groups in the chaotic new geopolitical landscape. The third book came out just before 9/11, a watershed event that marked the end of an era. In an important sense, Pascual’s world ended on 9/11.

I moved on to other things. Almost twenty years went by, and then Adam Dunn, founder of Dunn Books, called my agent. He had liked the Pascual books, been intrigued by the character, and he had wondered what might have become of Pascual. He wanted to know if Dominic Martell would be interested in reviving the series.

Dominic, of course, was keenly interested. Adam called me and we had a long talk about where he saw the series going. The old world of Cold War, Soviet-sponsored terrorism was dead; the new world featured not only a new geopolitical landscape but also revolutionary technologies that had transformed the way everything was done, including warfare, intelligence-gathering and crime. Was there a role anywhere in this world for Pascual?

I said I would create one. Adam stressed that he was interested in Pascual twenty years on, personally as well as in the context of his environment. What had he been doing for twenty years and how would he, middle aged now and long out of the game, cope with this brave new world?

It was an interesting challenge, but not unprecedented. One of my favorite writers, Margery Allingham, had taken her featured sleuth, Albert Campion, all the way from the 1920s up through the sixties, aging him as he went, marrying him off and providing him with a son. Not only the character but the series as a whole evolved, beginning in a fairly frivolous vein but maturing with the years. The later books are, among other things, novels of manners about a changing Britain through the middle years of the twentieth century.

That long arc spanning multiple eras makes for compelling reading. Walter Moseley took Easy Rawlins all the way from his adolescence in late 1930s Houston to post-Watts Los Angeles over the course of his series, one man’s trajectory providing a sweeping view of African-American life over three crucial decades when the country was forced to begin to confront its racial sins. When Easy first leaves Texas, Jim Crow still prevails; the Los Angeles through which he moves in his later cases is seething with late-sixties social upheaval. Continuity of character against a background of change characterizes the great epic novels; the best long-running series approach that standard.

For an epic canvas, it would be hard to surpass Philip Kerr’s Bernie Gunther series. Kerr started with the inspired concept of putting a hard-boiled private eye into late-thirties Berlin, a sort of Teutonic Philip Marlowe. Then at some point he realized that Bernie could be a vehicle for a more ambitious project: to explore the catastrophic middle of the twentieth century. Fifteen years after the first three books were published, Kerr resumed the series in a darker vein, recording Gunther’s survival at the black heart of the Nazi regime, his travails in a Soviet prison camp and then a postwar odyssey that takes him to Argentina, Cuba, Croatia, Greece and the French Riviera, contending with fallout from his past at every stop. The densely researched series covers thirty years of traumatic history, with Bernie evolving from a young Berlin copper to a jaded old morgue attendant in Munich in 1957, exhausted and embittered but clinging to his integrity.

So I had some models to refer to when reviving Pascual, properly aged. But the twenty-year hiatus was an interesting twist. I had to account for his two decades of unmolested anonymity, and I had to account for its end. I had Pascual retire to the Catalan hinterland and raise a son with the woman he winds up with at the end of the third book. And I traced out the connections and circumstances that would make him, twenty years on, a valuable property for an agency intent on skulduggery and requiring a front man of unstable identity who can’t refuse the offer he is made.

In Kill Chain, Pascual will have to confront a new threat landscape, older and not as quick on his feet, but, we hope, with a little bump up in wisdom to assist him. His struggles to master the intricacies of cybersecurity, cryptocurrency and pervasive surveillance will mirror his creator’s. But if anyone out there has missed him, I hope they will find enough of what they liked about him to follow him as he is dragged back into the game, long after he thought he was out of it. 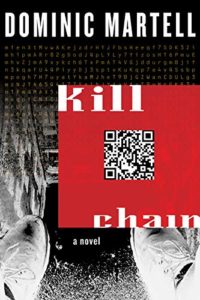 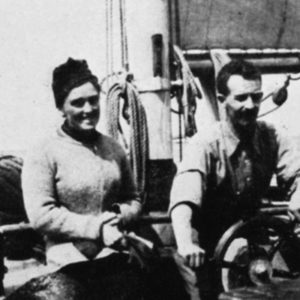 Born in 1870 Erskine Childers was a Gentleman, man of Empire, son of Victorian Britain, Civil Servant, veteran of the Boer...
© LitHub
Back to top