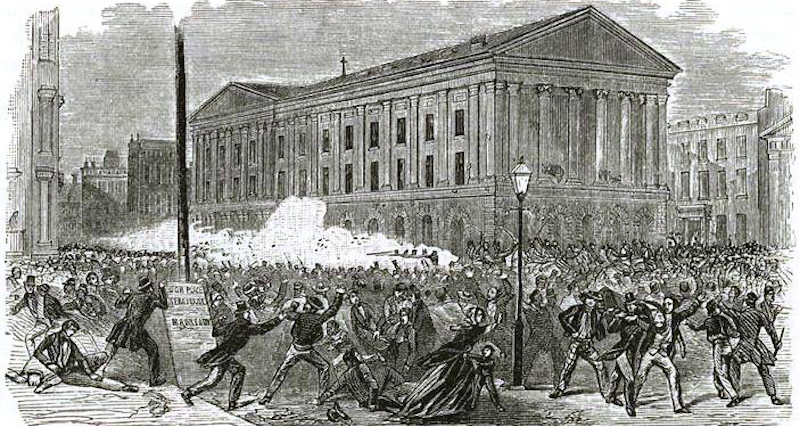 The New York State Militia arrived and fired into the crowd, leaving more than twenty dead and a hundred injured

Although the rivalry between Irish-English actor Charles Macready and American actor Edwin Forrest reached its violent apex in the streets of New York City in 1849, their dislike for one another officially began brewing years earlier. During this era, the high-born, English actor Macready, and the working-class, rags-to-riches star Forrest, were competing for status as the greatest actor of the day, and their professional competition symbolized the class-based and political tensions between the two represented nations, which were mounting during this time period. To many, Macready, who was about seventy years old, represented an old guard celebrity still hanging on to cultural importance due to the bias of industry insiders; in New York, most theater managers and companies were British, so the American Forrest’s rise to fame pushed back against British cultural hegemony within this industry.

Though each was considered to be the best performer by those in their respective nations, their tours in opposite continents were less well-received than either would have liked. According to an 1848 article in The Boston Mail on October 30th, when Macready had arrived in New York earlier in the decade, to attempt to achieve this title, he had charged an exorbitant fee of $1 per ticket for his performance, resulting in a sparsely-attended theater. The article suggested that the following year, the two actors met in Paris, with Forrest attempting to mount a performance there, and Macready, out of revenge, preventing this from happening. When they returned to London, evidently Macready invited Forrest to dine with him, but when Forrest appeared onstage at the Princess Theatre later on, he attempted to sabotage this, too. When unable to prevent him from putting on a production, The Boston Mail suggests that he hired men to come to the theater and “hiss Forrest off the stage.”

In 1846, Forrest attended a performance of Macready’s Hamlet in Edinburgh. He found Macready’s performance lacking; an account in The Scotsman entitled “Professional Jealousy” noted that Forrest “hissed” at Macready from his seat, “with a view of expressing his disapproval of the manner in which Mr. Macready gave effect to a particular passage.” Shortly thereafter, Forrest published his own account in The London Times, decrying The Scotsman‘s coverage as obloquious; Forrest wrote that anyone in the audience is always welcome to applaud or hiss at moments thought to be good or bad, and that The Scotsman neglected to mention the many times Forrest had applauded for Macready. In addition to justifying his reaction, however, he went a step further, insulting Macready’s performance: “The truth is, Mr. Macready thought fit to introduce a fancy dance into his performance of Hamlet, which I thought, and still think, a desecration of the scene.” He added that he wasn’t the only one who thought so. (The Boston Mail notes that the whole audience followed suit.)

The following year, Macready toured through the United States, again. In a speech given at the Arch Street Theatre, he referenced Forrest’s “hiss” towards him. Forrest caught wind of this, and published an angry response, citing all the times Macready had sabotaged him, and additionally characterizing Macready’s own assertions about feeling hostility from American audiences, as folly. “Mr. Macready has a very lively imagination, and often draws upon it for facts.”

Afterwards, Macready made a motion to sue Forrest for libel, but his lawyers advised him to lay the matter to rest, a process which inadvertently resulted in the publication of his case materials. Macready pulled them, but it may have been too late. It seems likely that this accident portrayed him as continuing to stoke the rivalry.

On May 7th, 1849, Macready was due to play in Macbeth at the new Astor Place Opera House (built in 1847 in Greenwich Village, on the small part of Lafayette St in between Astor Place and 8th St, it no longer stands, having been dismantled by 1853 and torn down in 1890). That night, a few minor fights broke out in the audience, between the actors’ rival supporters. But the boldest challenge to Macready came not from Forrest’s fans or Anti-British theatergoers, but from Forrest, himself. He staged his own production of Macbeth at the same exact time, further downtown at the Broadway Theatre (which also no longer stands).

According to Columbia professor James Shapiro in his anthology Shakespeare in America, the press made the most of this conflict, representing it as the ultimate symbolic standoff, “the aristocracy against the people.” Affectively speaking, the two Macbeth performances could not have been more different, with Macready’s in a more affected, grand style, and Forrest’s closer to what we might refer to today as more “method.” When Macready began his Macbeth again on the 10th, a few days later, the crowd before him (mostly composed of the pro-Forrest faction) began to boo. The surviving account of the riot entitled “Account of the Terrific and Fatal Riot at the New-York Astor Place Opera House,” chronicles:

“On the stage, the English actor Macready was trying to play the part of Macbeth, in which he was interrupted by hisses and hootings, and encouraged by the cheers of a large audience, who had crowded the house to sustain him. Outside a mob was gathering, trying to force and entrance into the house, and throwing volleys of stones at barricaded windows. In the house the police were arresting those who made the disturbance—outside they were met by a volley of paving stones.”

The mob was fifteen thousand strong, and soon, the New York State Militia arrived. This onslaught only galvanized the crowd more—but they turned away from attempting to force entry into the theater and onto the soldiers. The soldiers, whose guns were outfitted with bayonets, fired into the tumult, killing more than twenty people and injuring more than one hundred.

The following day, New York City was abuzz with the news. Many were outraged. A group of people, calling themselves “Citizens opposed to the destruction of Human Life” [sic] assembled, as the anonymous account observes, “in the park,” to offer resolutions. Others were galvanized. Later that night, another mob gathered outside the Theatre (even though Macready was by now in Boston), but the surveying military broke up the crowd and sent everyone away, barricading the routes to the theater. But the mob reassembled and grew violent along Broadway, ultimately attacking troops along the Bowery. At around 9 pm, the mob built their own barricade along 9th St, along with some bonfires, but the police broke this up as well, and arrested many present. By midnight, the street was calm and empty.

As part of the inquest, the New York City Coroner assembled a jury of men to assess the bodies of those killed. At least twenty-three died, all men, most of them young. 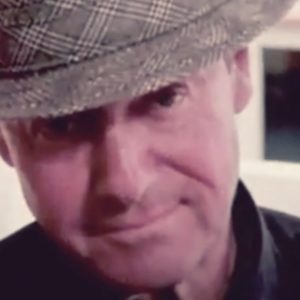 In the mid-1970s, Kenneth Millar, better known by his pen name Ross Macdonald, was living comfortably in Santa Barbara with...
© LitHub
Back to top