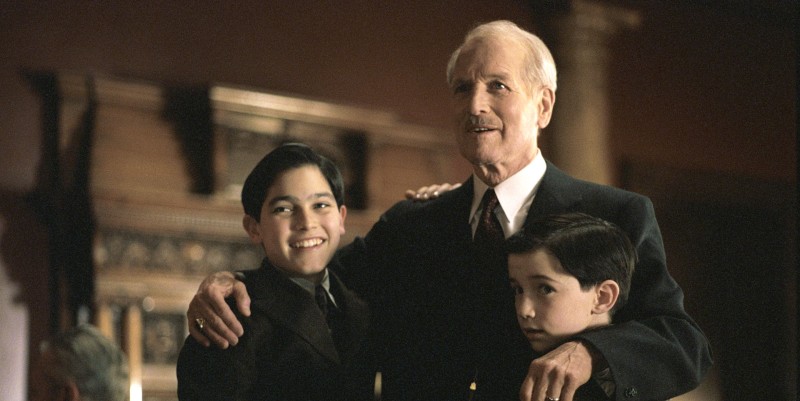 Is there any scene of screen violence that wouldn't be better if 'Danny Boy' were playing on a gramophone in the background?

When I was a kid, I always struggled to make conversation with my grandmother, who was from County Meath, Ireland. Sometimes I’d try to bridge the gap by bringing up things related to Ireland, and shortly after seeing a certain movie listed below, I tried to describe “the Danny Boy scene” to her. She was a little hard of hearing and my mother, somewhat annoyed, eventually clarified what I was talking about. “They’re gangsters, ma, criminals,” she said.

Movies have always had an odd relationship with the Irish-American gangster. Perhaps the two most celebrated gangster movies of all time, “Goodfellas” and “The Godfather,” prominently feature Irish-American characters despite centering on the Mafia. Conversely, the movie “The Irishman” isn’t even about the Irish mob, but about a single Irishman who works for the Mafia. But here, in honor of St. Patrick’s Day, are the eight best Irish mob movies of all time—seven for luck and then one more, because St. Patrick’s Day is all about having one more than you should. 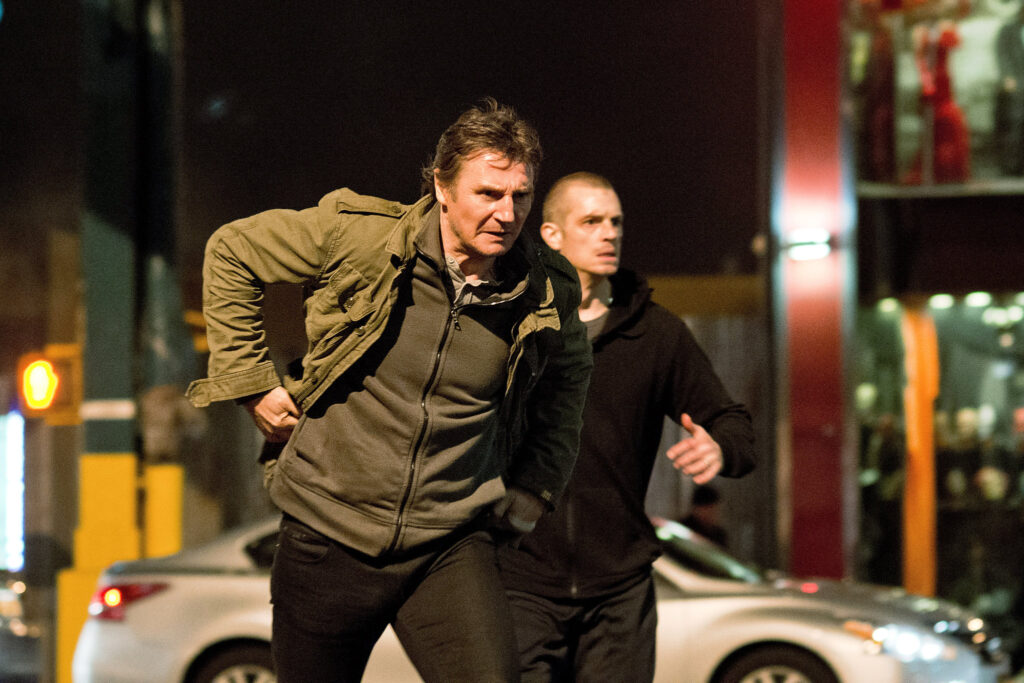 Since Liam Neeson began his second act as an action-thriller assembly line, it’s hard to tell which of his output is worth watching, but this is definitely one of them (as well as the rare case where his undisguised brogue kind of makes sense in the context of the character). Neeson stars as an alcoholic retired enforcer pulled back to action after his old friend and boss (Ed Harris, who’ll be a recurring fixture on this list) sets his sights on Neeson’s estranged son (Joel Kinnaman), blaming him for the death of his own firstborn.

Neeson is forced to traverse his old New York stomping grounds and save his son’s life in a single night, pursued by Harris’ goons, corrupt cops and honest cops who think Kinnaman’s the one dropping the bodies in their wake. The results play out like a fun, much stupider version of the Safdie brothers’ “Good Time.” Frequent Neeson collaborator Collet-Serra creates a reasonable facsimile of what might be called “John Wick vibes,” while Neeson and Harris both add nuance to the old crime-fiction standby of bad men holding out hope they can raise better sons. 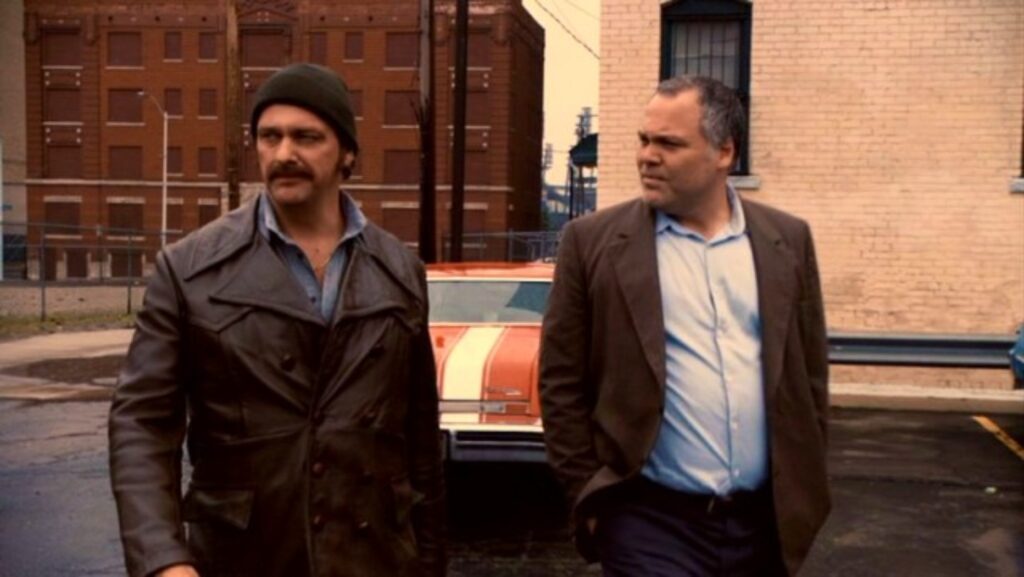 This film takes us to the Rust Belt, an underexplored but fertile territory for mob history, to tell the fact-based story of Danny “The Irishman” Greene, a Cleveland longshoreman whose small-time criminal operation waged a guerrilla war against the Cleveland Mafia in the 1970s. While (historical spoiler) a car bomb eventually felled Greene, the expense and public spectacle of the war against Greene hobbled his Italian rivals and sent most of them to prison, and today the Forest City has no Mafia presence of its own to speak of.

“Rome”’s Ray Stevenson sinks his teeth into the role of Greene and doesn’t let go, giving him Conor Macgregor swagger to match his burnt-orange wig and facial hair. He’s backed up by typically great performances by Christopher Walken (as rival loan shark Shondor Birns) and Vincent D’Onofrio (as Greene sidekick John Nardi, a defector from the Cleveland family). And that’s not even getting into the staggering supporting cast of Mafia film stalwarts (Paul Sorvino, Tony LoBianco, Steve Schirippa, Mike Starr, Tony Darrow). Reviews were meh, noting that we’d seen many of the rough plot beats in better films, but is it really the filmmakers’ fault that cocky gangsters tend to come to similar ends? 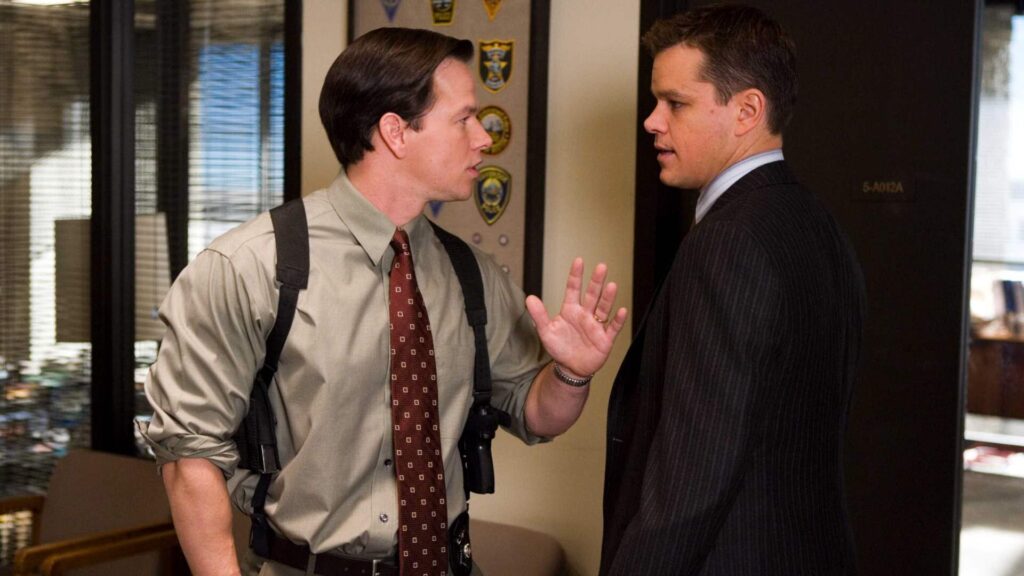 Perhaps this remake of the Hong Kong film “Infernal Affairs” isn’t the movie Scorsese should have finally won an Oscar for; less fair is the dismissal of the movie as simply more of the same from the “Goodfellas” and “Casino” director. Compared to his earlier, Mafia-centric films, the difference is almost literally night and day—in addition to focusing on the Irish-American dirtbags of South Boston, this is not a sprawling, multi-decade epic but a claustrophobic noir; the viewer shares in the feeling of the walls closing in on both harried undercover cop Billy Costigan (Leonardo DiCaprio) and Colin Sullivan (Matt Damon), his smirking, careerist counterpart in the Irish mob.

There’s also never the opportunity for the tedious debate over whether Scorsese romanticizes these characters’ lifestyle; the vibe is rank, blood-soaked sleaze all the way down, and Jack Nicholson’s mob boss Frank Costello is a leering, terrifying figure who puts the lie to the idea of the “glamour of evil.” Costigan’s initiation into this world isn’t getting into the Copa through the backdoor; it’s Costello pounding on his broken hand with a boot demanding to know whether he’s a cop. 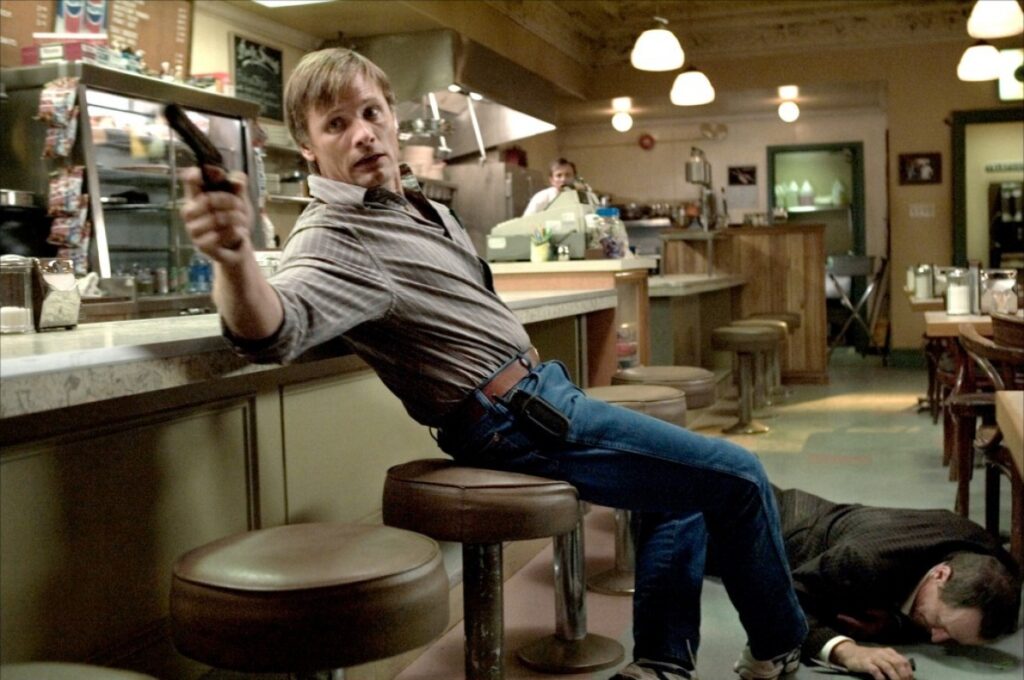 It’s actually only by the grace of Cronenberg that this film even qualifies for the list; in adapting John Wagner and Vince Locke’s graphic novel, he made its Italian mobsters Irish instead after casting Viggo Mortensen, Ed Harris and William Hurt, wisely deeming them unconvincing paisans. Mortensen stars as an Indiana diner owner and family man who kills two stickup men in self-defense. The resulting news coverage catches the attention of disfigured Philly gangster Harris, who stalks into town insisting Mortensen is not who he claims to be.

The tensions between the two eventually take Mortensen back to the City of Brotherly Love, another setting with an extensive, bloody criminal history but little to show for it in pop culture. Cronenberg proves the ideal shepherd through this world, imbuing it with visceral, quick-striking violence that makes you feel physically exhausted, like you were in these fights yourself. It’s the perfect style for depictions of Irish-American organized crime, which has always felt grimier and colder than its more famous counterparts. 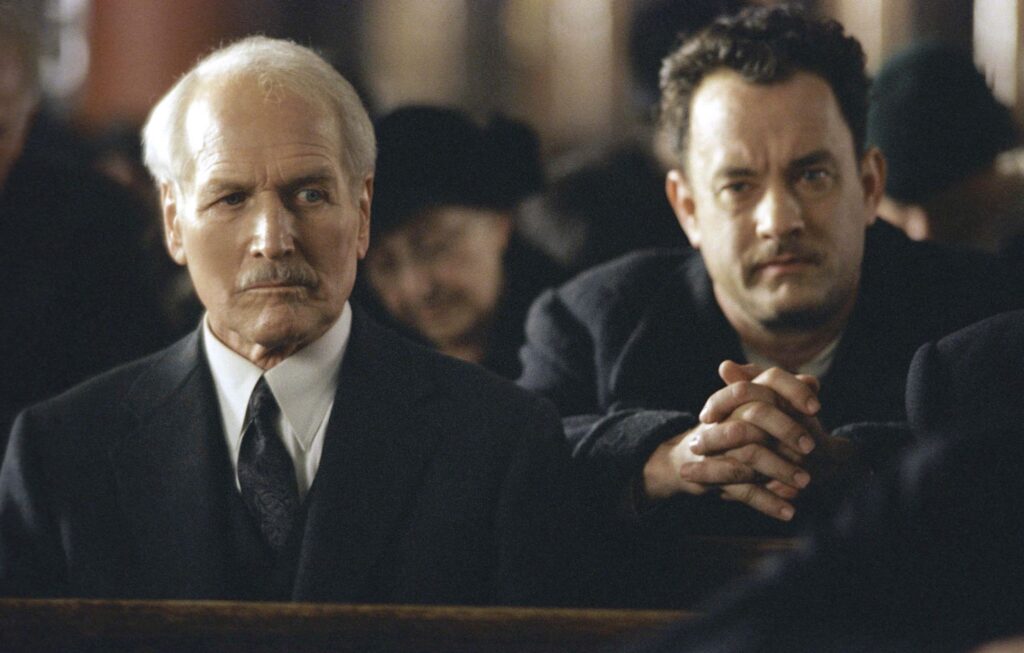 Tom Hanks is rightly regarded as a national treasure, but for the most part, when he’s cast in a movie you can safely assume what sort of character he’s going to play. Not so for this adaptation of Max Allan Collins’ comic, in which he stars as Michael Sullivan, a prolific hit man for a Depression-era Irish crime family headed by John Rooney (Paul Newman, in his last non-voice performance).

When Sullivan’s 12-year-old elder son Michael Jr. witnesses his father plying his trade, Rooney’s wormy failson (Daniel Craig) puts a hit out on the entire family, with only Senior and Junior surviving. The two go on the run, with a sociopathic assassin (Jude Law) in pursuit, as Michael Senior tries to find a solution that will both avenge his family and preserve his surviving son’s innocence.

The complicated family dynamics that many Irish-Americans know well abound here, particularly in the relationship between Rooney and Michael Sr., a father and son in everything but blood. Hanks is unsurprisingly great, but Newman, who was nominated for an Oscar, is the MVP. In a scene that serves as the film’s thesis statement, he scolds Michael Sr. for his selective morals. “There are only murderers in this room,” he barks. “There is only one guarantee: none of us will see heaven.” “Michael could,” Sullivan responds. 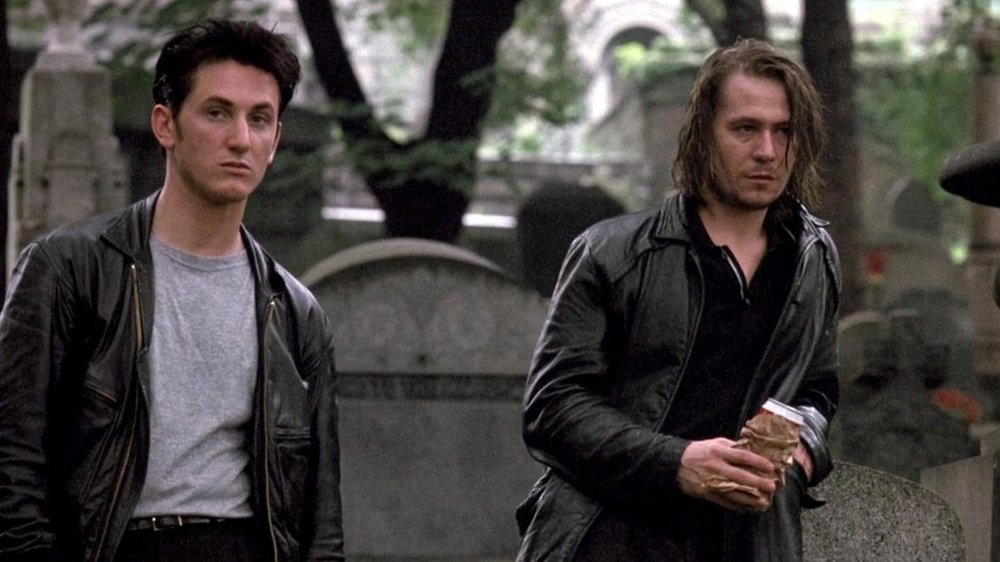 In a year that saw the release of “Miller’s Crossing,” “Goodfellas,” “King of New York” and “The Godfather Part 3,” not every gangster movie could be a hit, and unfortunately, “State of Grace” was among the also-rans. That’s a real shame, because it’s a great one, and one of the only fictional looks at the Westies, the notoriously vicious gang that dismembered their way through pre-gentrification Hell’s Kitchen.

Sean Penn, more babyfaced than a modern audience would believe possible, stars as Terry Noonan, an undercover cop who infiltrates the crime syndicate of his childhood friends Jackie (Gary Oldman) and Frankie Flannery (Ed Harris). Noonan is more conflicted than he was prepared for, particularly after he rekindles his relationship with Frankie and Jackie’s sister Kate (Robin Wright).

Meanwhile, the Flannery brothers are struggling with their own internal tensions, with Jackie fiercely loyal to the old neighborhood and its people while his ambitious brother seeks to expand his horizons with an alliance with the Mafia, even at the expense of his Irish contemporaries. Everyone’s at the top of their game here, particularly Oldman, playing essentially a more sympathetic version of his cranked-out psycho in “The Professional,” and Harris, restrained and steely-eyed but imbuing everything he says with an air of implied menace.

This also has the distinction of being the only film on our list actually set on St. Patrick’s Day, giving us a masterful climax in which the St. Patrick’s Day parade’s brightly-lit sea of green contrasts with the bleak lighting of a barroom shootout.

I’ve extensively sung the praises of this one before, but can you really blame me? One of the Coens’ best movies very roughly adapts Dashiell Hammett’s “The Glass Key;” when mob boss Leo O’Bannion (Albert Finney) risks a bloody gang war for the sake of his affair with bookie Bernie Bernbaum’s (John Turturro) sister Verna (Marcia Gay Harden), his consigliere and best friend Tom (Gabriel Byrne) goes full Yojimbo, playing all sides in hopes of saving his friend and neutralizing their respective enemies.

Anchored by Byrne’s soulful, pensive lead performance, the Coens add a touch of the eerie folk magic of the Old Country not often seen in cinematic depictions of the Irish mob, from Carter Burwell’s gorgeous Celtic score to the recurring dream-image of the wind carrying Tom’s black fedora into the forest. And then, of course, there’s one of its most legendary scenes, in which Leo foils an assassination attempt on him in his dressing gown by disarming the hitmen, escaping his burning mansion and turning a tommy gun on them, all while an Irish tenor’s soaring rendition of “Danny Boy” builds to a crescendo on his gramophone. 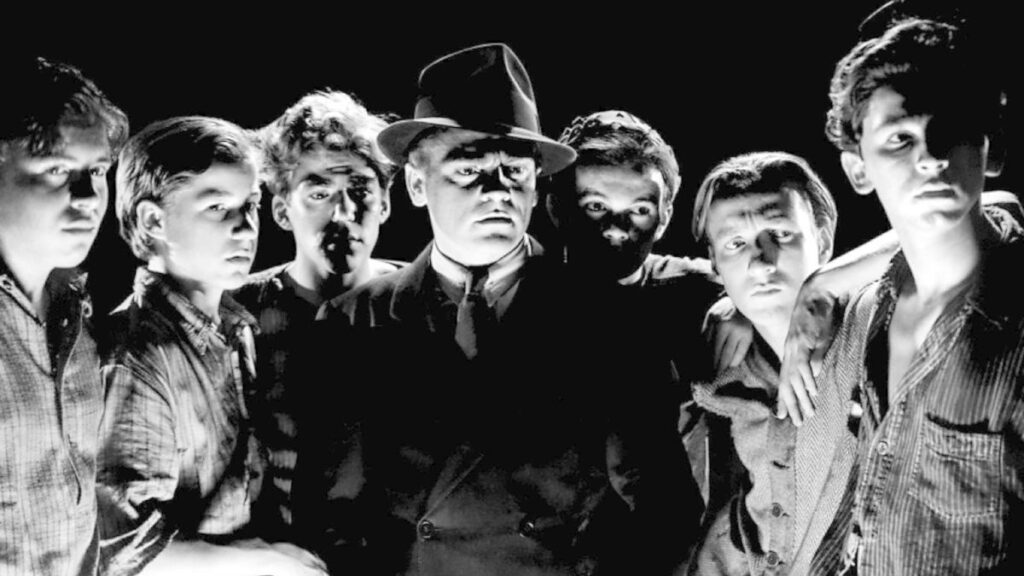 It’s impossible to talk about the history of the silver-screen gangster without talking about James Cagney, who codified many of the genre’s tropes with his star-making 1931 performance in “The Public Enemy.” It was seven years later, however, that he gave his best performance in a gangster movie, and one that set the stage for much of the tropes, imagery and aesthetics as the others on this list.

Cagney stars as Rocky Sullivan, a kid from the slums of New York who gets busted committing a petty theft while his best friend Jerry escapes. Years later, Jerry (Pat O’Brien) is a priest and Rocky is a gangster, and a gang of neighborhood kids is caught between their respective influences. Rocky, meanwhile, is also out to settle with his backstabbing collaborator (Humphrey Bogart). In the film’s now-legendary ending, Rocky, facing the electric chair, drops his tough-guy stoicism and howls for mercy, shattering the kids’ image of him, possibly deliberately.

A lot of the movie will seem laughably old-fashioned and melodramatic to anyone who’s not into “old movies,” but today its influence is everywhere—from “Angels with Filthy Souls,” the fictional gangster movie that features so memorably in “Home Alone,” to the New York City bar Rocky Sullivan’s Pub to one of the best episodes of Batman: The Animated Series. Its themes of sin, redemption and the long shadow thrown by the past are present throughout both the other movies on this list and the gangster genre in general. 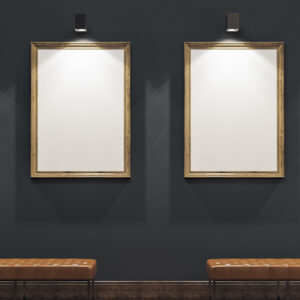 A moment of reckoning took place earlier this month in the “stolen art” arena: After a years-long investigation, the Fine...
© LitHub
Back to top