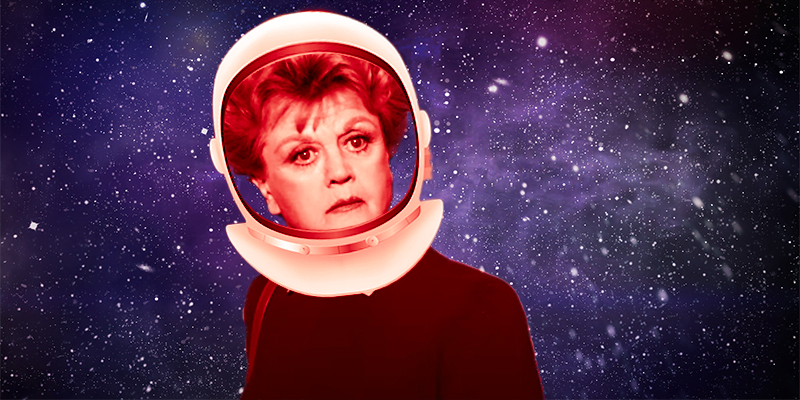 "Straddling between dark murder and lighthearted alien adventures was a real challenge..."

Several years ago, I was chatting with an editor and mentioned an idea I had about clones and murder in space. She loved the idea and after the ink was dry on the contract, I went into a panic. “Hang on. I don’t know anything about murder mysteries! What have I done?” So I went into research mode.

I spent the next few months reading all the Agatha Christie I could get my hands on, and started watching murder shows regularly. I’m from Generation X, so I did know one thing about murder: Jessica Fletcher was the most successful serial killer in history. Or at least that was the joke back then. My husband and I consumed a lot of more recent murder mysteries in TV and book form, such as Father Brown, Miss Fisher, and Midsomer Murders. If you take any one of these stories by themselves, they offer an engaging story and an interesting mystery. But if you look at them as a whole, you wonder why no one ever points out, “Damn, there’s a lot of murder in Midsomer County!” (its murder rate is 278 times the rest of England and Wales, as reported by My London in March, 2021.) They never say, “Lady Felicia [Father Brown] sees dead bodies all the time, and every time she still screams like it’s the first one she has ever seen.” And they never ask why all these murders happen around Father Brown and Miss Fisher. I sure as hell wouldn’t go to Father Brown’s church. He’s delightful, but too much murder.

So I started thinking about playing with the trope itself. What if someone DID say, “of course there’s a murder; Father Brown came to the fete. THANKS, FATHER BROWN.” People might get paranoid. “Don’t invite Miss Fisher; someone will end up dead!” Fiction doesn’t usually like to point out when it sacrifices consistency on the altar of Plot. But I kept thinking, if these murders happened in our world, Father Brown, Miss Fisher, and Jessica Fletcher would be shunned, not to mention frequently investigated for their connections to the murders.

But I’m a science fiction writer, and tend to want to throw weird technology, space, or aliens into stories. I am a fan of Babylon 5, the TV show that featured a diplomatic space station full of aliens and humans, and I had the idea that if our murder magnet protagonist could escape humanity without being totally alone, she might take that opportunity. Maybe murders won’t happen if she’s surrounded by aliens? Worth a try.

(Someone pointed out that J. Michael Straczynski wrote for MSW and created B5, which tickles me. I hope we can get a copy of Station Eternity into his hands. If we really do live in a Six Degrees of Separation reality, one of you might be able to show him this book.)

My heroine, Mallory Viridian, was created—but I needed at least one more interesting human, a partner, with Mallory on the station. That’s when I turned to clipping., the concept hip-hop rap group. They received a Hugo nomination for their album Splendor In Misery about a slave, known only as 2331, on a spaceship who overpowers his captors, takes control of the ship, and then has to flee into the deep dark. It’s a powerful album, and I absolutely love it. I got a strong desire to include a story about a man who bonds with a sentient ship and is otherwise quite alone in the universe, and Xan Morgan was born.

And because I love comic relief, the joyriding, intoxicated aliens who abduct Xan were born shortly thereafter. I can’t help it.

Lastly, I want to discuss Mrs. Brown. She is there primarily to answer Ursula K Le Guin who wrote an essay called “Science Fiction and Mrs. Brown” (The Language of the Night, 1976). In it, she references an essay by Virginia Woolf who watched an unassuming woman on a train and made up a fully realized character (today we call it headcanon) for her, then wondered if literature could return to character-driven narratives. Le Guin’s essay looks at Mrs. Brown through the lens of SF. I won’t do a book report, but the essay is summarized in the blog SciFi Mind,* “Science fiction offered a promise for the “continued life of the imagination” and an “enlargement of consciousness, a possible glimpse, against a vast dark background, of the very frail, very heroic figure of Mrs. Brown.’ (p. 119).” With that, I had to include Mrs. Brown in my story. She suffers no fools, but wants to be as proper as she can be. (Until encountering the aforementioned fool.)

Also, I realized that subconsciously I put a little bit of my Grandma Lafferty into a lot of my stories. They seem to frequently include a tough old woman I like to call a “murder granny.” (While tough, the murder granny may or may not be an actual murderer. Also, to my knowledge, my Grandma was not a murderer.) In this book, there’s a little bit of my maternal grandmother as well, who was not tough as nails, but screamed during televised golf for the rolling ball to do her bidding, and really liked radio contests…

So, Mrs. Brown went from Woolf, to Le Guin, to me, with a dash of two grandmothers. I don’t know if those giants of literature would approve of my Mrs. Brown, but I thank them for their inspiration.

I’m sure you have heard enough creators talk about how the pandemic changed their writing, so I won’t go into too much detail, but I have always done my best to offer entertainment and levity to folks’ lives with my work. I know funny/dark SF probably won’t change the world, but it can change one person’s day. Now, more than ever, I take that role seriously. Straddling between dark murder and lighthearted alien adventures was a real challenge, but my editors at Ace helped me steer it.

And now you can take my murder cozy, hip-hop, literary essay, 90’s SF—inspired book and, I hope, enjoy it. 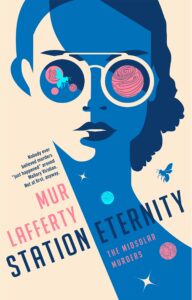 Mur Lafferty is an author, podcaster, and editor. She has been nominated for many awards, and even won a few. She lives in Durham, NC with her family. Her latest novel, Station Eternity, is now available. 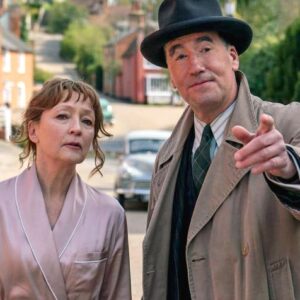 It's just about October, which means your streaming services are going to be packed full of horror, but for the avid crime...
© LitHub
Back to top