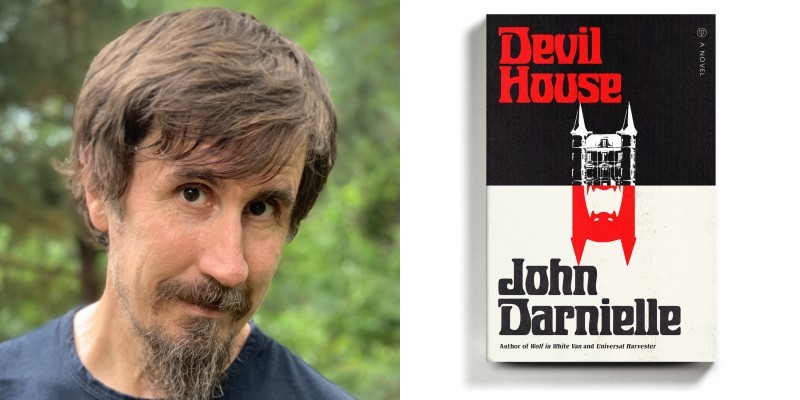 Coming fresh to a new work by the author and musician John Darnielle is a deeply unsettling experience. From the outset, you’re fairly certain that what appears to be a modest, brooding text will transform into a howl of loneliness and a prolonged meditation on some of life’s rawest forms of pain, but you’re not quite sure how it will all go down. There’s a Hitchcockian element to his work, in that sense: an ever-building dread, along with the anticipation at turns to come and what they might expose. (His 2014 novel, Wolf in White Van, might be one of the most slyly disquieting works to come around in a long while, but Universal Harvester (2017) certainly gave it a run for its money.)

In his latest novel, Devil House, a true crime writer finds himself adrift, disenchanted with his life and work, and eventually drawn to a small-town in California and a house that was the site of a notorious crime supposedly caught up in the 1980s Satanic Panic. Devil House soon spirals outward and becomes an uncanny portrait of a town, its people, its secrets, and the long, complicated afterlife of violence and tragedy.

I caught up with Darnielle to ask him about the book’s inspiration, his experiences of true crime culture, and how crime stories transform into legend.

Dwyer Murphy: Can you take me through the early inspiration for this book? It feels like one that had a definite starting point. An incident or a story that stayed with you. How did Gage Chandler first come into focus?

Did you dive into the world of true crime ‘fandom’ (for lack of a better word) for the research? Gage has such an ambivalent relationship with his work in that space: a highly refined sense of what the stories demand of him, but also a growing dread at his own inclination to give it. All that in addition to how it will be received. I’m thinking you must have spent some interesting time dwelling on true crime culture.

I did, a little—and I used to read a  lot of true crime, especially back in my library-stacks-haunting days as a lost young man—in the pre-Internet time, you had to do a lot of legwork to learn the grisly details, and there was a sort of status economy in knowing more about it than other people who were into the same thing, in having a more accurate version of stories that circulated mainly as legends. And, you know, when you’re young and angry and over-edgy, you get something of a charge from how bizarre the whole world of crime seems, how disruptive and norm-violating. You read a lot of Genet, right. But in summer 1985 I had a friend, a fellow Genet-lover, a fellow goth-adjacent person who knew all kinds of true-crime trivia—this was in Pomona, and that was the summer of Richard Ramirez, the Night Stalker. And suddenly my friend was terrified; he always slept with his window wide open, and this was in a great big early-twentieth-century southern California house so we’re talking about a window you could climb through real easy, and he started closing the window, asking friends to stay over. And I think this sort of planted a seed for this book, of the tension between the allure of gory stories as stories and the reality of what they’re about, which has very little luster to speak of, which is usually at bottom stuff that you don’t want getting caught in the cobwebs of your imagination.

How did the connection to Arthurian legend catch a spark? At first glance, the affinity between that kind of legend and true crime mythology isn’t necessarily apparent, but as you give them both texture in the story, we really see what interesting facets they bring out in one another. It’s an interesting character trait, also—so telling about Chandler, his family, and how he comes at the world.

Well, it became clear as I told the first two stories—of Gage moving to Milpitas, and of Diana Crane—that I was talking about myth-making, about how legends get built. And this is something that’s been interesting to me forever, the way that French romances become English legends, and Welsh history transforms into Arthurian myth—all these transmutations. And for me there’s sort of a double-delight in all this, because you get a really fun story (the legend) and also a deep mystery, of what the legend cloaks, of what it seeks to conceal. To some extent I think all storytelling is concerned with some dynamic like this—storytelling is the art of deciding what to leave out, right?—but when you enter into crime stories, then you’re in the terrain where the power of myth really starts to assert itself—stories without authors  stuff “everybody knows.”

What drew you to Milpitas in particular? It seems to occupy a very specific place in the contemporary California landscape.

Well, I lived there for a year or two as a kid—the me in part VII is really me. It was a very brief span during a turbulent time in my life, and it was also there that I first decided I wanted to be a writer. I had a friend next door who spun her own urban legends—about murders!! stuff that had taken place just down the block!!—and who insisted, I remember the day she said it to me with great fervor, “All my stories are true!” I had a couple of other possibilities for where to set the action, and actually went a ways with one of them, but settling on Milpitas is what opened up the book.

Can you tell me a little about what drew you to this 1980s Satanic Panic legacy? Chandler is looking for crimes that have bigger mythologies built up around them, and certainly that period and the occult intonations qualify, but was there something in particular about the crimes in that era that caught your imagination?

I was working in child & adolescent psych during that period—I was pre-licensed, so I basically worked as an attendant / orderly—but I had my CNA certificate and I was done with the nursing program, I was just waiting to take the exam. And McMartin was such a giant deal; this was in southern California, it dominated the news cycle for what felt like forever. And we on the hospital floor were told in no uncertain terms that Satanic ritual abuse was actually pretty common, you know, when this was actually a moral panic—I know a lot more about this now than I did then, when I was, I think, about twenty-one years old. Possibly only twenty. So, over the years, I’ve stayed current with the thinking about that whole era, about the damage done by the panic, and it can be hard to separate out from what we were getting told at the time. So when I reflect on that, it seems like a very complicated moment both in cultural history and in my own history—those sorts of complicated moments are kind of where I live, when I’m writing, I like things with knotty answers.

Did you find that your own relationship to murder and death—in particular, what it means to tell stories about them—evolved as you were working on this?

Yeah, I sort of learned—or confirmed, this has been ongoing for about ten years—that I don’t really have the stomach for the real thing like I used to. I started digging into the current landscape of true crime, and, without wanting to wag my finger at anybody for what they enjoy—life’s cold sometimes, take pleasure where we find it, right?—a lot of it felt voyeuristic, while simultaneously striking this sort of moralistic tone: toward the perps, or toward bad investigations, whatever. Whereas, for me, I sort of lock in on the pain of the people who survive some of these crimes, how hard it must be to bear all that. How it must have ripples in your life. I think this is sort of a natural process of maturing, for me anyway, to be much more interested in the victim than the perpetrator; but I spent enough time on the other side of that street to know it’s never as simple as that, that there’s sort of misery enough to go around, you know. And yet, some of the stuff I looked into while writing this—like the list of killers in the Derrick section of part five—it’s just a three-item list, but it’s the fruit of several days’ work, looking up crimes for the right time-span with the right details. And I wound up right back in the grip of that feeling you get when you start thinking about crime, where your own moral center shifts a little and you get a colder eye, and true stories sort of assume a patina of myth, and you get caught up by the sort of narrative flash of it: the names assigned to killers by the press, the reputation of this or that crime. Which, I think, is what makes these stories feel safe to hear—it’s hard to really contain the stuff you learn about human beings if you read about this stuff too much. 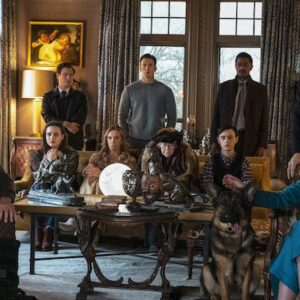 One reader’s fair-play mystery is another’s confounding enigma, so at the risk of starting an internet debate, first...
© LitHub
Back to top