The Christmas I was 21, my sister gave me six of the sexiest paperbacks I had ever seen, James M. Cain’s The Postman Always Rings Twice, Double Indemnity, Mildred Pierce, The Butterfly, Serenade, and Love’s Lovely Counterfeit, updated with beautiful sepia-tinted covers. Although I was in college, with little time for discretionary reading, I began tearing through those books, finishing Postman in time to be completely underwhelmed by the Jack Nicholson-Jessica Lange movie version when it was released seven days later.

The first film version of Postman, with Lana Turner and John Garfield, had come out in 1946; the so-called Production Code had stalled the film version for more than a decade, yet it was still relatively tame compared to the 1934 book. Logic dictated that the 1981 film should have been truer to Cain’s work and therefore sexier. But it was a dud. Cain’s brilliant dialogue fell flat on the screen, freedom was just another word for everything left to lose.

Still, my love affair with Cain’s novels blazed on. I read the final book in the set, Love’s Lovely Counterfeit, on a 24-hour bus journey between Chicago, where I was in college, and Waco, Texas, where I had a job interview for what would become my first newspaper job. Counterfeit remains one of my favorite Cain novels—human-scale, with insights into local politics that few books get right. Years later, I noticed that a favorite film, Miller’s Crossing, had several sly references to Counterfeit. The book’s mild-mannered Swede, for example, shows up as the murderous Dane in the movie.

Mildred Pierce is my favorite Cain novel, but Postman, his first, is probably his best. In 1994, while a reporter on the Baltimore Sun’s city desk, I pitched a piece about Cain’s Maryland roots tied to the 60th anniversary of Postman’s publication. I had a scheme, you see, albeit one with much smaller stakes than the murder plot launched by Postman’s hapless Frank and Cora. I wanted to get into feature-writing, a cushier gig with regular hours, something that would help me finish the novel I had started writing in my spare time.

Besides, I had long felt an affinity for Cain, who had worked for the very newspaper where I toiled. If he could break out of newspaper life and make it as a novelist, maybe I could, too.

One thing that most people don’t realize about Postman is that it was a dazzlingly successful first novel. Cain’s biographer, Roy Hoopes, whom I interviewed for my Sun article, called it a “grand slam”—a commercial hit with glowing reviews, which sold to both the stage and the movies. It was even banned in Boston, which proved to be invaluable publicity. Although publisher Alfred A. Knopf found the ending “soppy,” the only significant editorial change was the title—Cain had originally intended to call it Bar-B-Q.

With success, however, came some frustrations. Cain chafed at the idea that he was hardboiled, a reputation that may have started with a review of Postman headlined “The Six-Minute Egg.” “I belong to no school, hard-boiled or otherwise,” Cain wrote in 1946. He disavowed Dashiell Hammett and Ernest Hemingway as influences. He scolded critics “on behalf of all writers of fiction . . . You’re really being a little naive, you know. We don’t do it that way. We don’t say to ourselves that some lucky fellow did it a certain way, so we’ll do it that way, too, and cut in on the sugar. We each have to do it our own way, each for himself, or there isn’t any sugar.”

The cynic in me finds Cain adorably naive; clearly there are writers who rip off others, but maybe that’s a modern development. The pedant in me notes that a six-minute egg, with its creamy warm center, isn’t truly hardboiled. But, come to think of it, that’s a pretty good description of Cain’s work. His dark stories are rooted in commonplace desires. Frank and Cora want to be together, but can’t imagine how to achieve this without killing Cora’s husband. Ditto Walter and Phyllis in Double Indemnity. Mildred Pierce is so twisted by maternal love that she marries a man to lure her daughter Veda home, then cooks the books to support the lifestyle that the spoiled girl demands.

My definition of noir has long been: Dreamers become schemers. Cain saw his work as a series of Pandora boxes: “I think my stories have some quality of the opening of a forbidden box . . . the reader is carried along as much by his own realization that the characters cannot have this particular wish and survive.”

My definition of noir has long been: Dreamers become schemers. Cain saw his work as a series of Pandora boxes.

In Double Indemnity, Walter and Phyllis began plotting her husband’s murder within days of meeting one another. Phyllis, as readers discover, is an old hand at killing, but Walter’s been a straight arrow. He wants Phyllis. He wants the money. And, I think, he wants to prove that he’s smarter than the mooks to whom he sells insurance, and smarter than his bosses, too. One of my favorite inside jokes in Cain is that Walter tells Phyllis that all would-be killers want to stage accidental bathtub deaths. That’s exactly the first tact tried by Frank and Cora.

My newspaper ploy worked, by the way. My piece on Cain was a hit with editors and, within three months, I had moved to the features section. Six months later, I finished my first novel, Baltimore Blues, which would end up being published in 1997. But to my disappointment, it wasn’t particularly hardboiled. If Cain was a six-minute egg, I clocked in at three. Which, as it happens, is how I like my eggs, but not necessarily my books. I had to accept that my PI character Tess Monaghan and I had gooey little centers and write accordingly.

And for 21 novels, that’s what I did, although my short stories were always dark. So dark that they scared my husband, who once asked if I was driving him to remote location to castrate him. “Where do you get your ideas?” I asked. “Your stories,” he said.

Where do I get my ideas? When did I decide to try my hand again at being a six-minute egg? My Cain homage, Sunburn, apparently occurred to me sometime in the fall of 2015, according to friends who remember me talking about it over po’boys in New Orleans. Certainly, by January 26, 2016, I was on my way. I know this because I posted to Facebook that I had written the first chapter that very day. It was only six words and it’s nowhere to be found in the final novel. But all the Postman hallmarks were there from the beginning. A man and a woman. A roadside tavern in a small town. A stranger passing through.

There was one key difference: The stranger was a woman and she had an extremely complicated back story, whereas the man she meets has led a pretty blameless life. Their attraction to each other is immediate. So are their lies.

One of my best friends, the writer Lauren Henderson, (now writing under the name Rebecca Chance) once observed that crime novels can be weirdly bookless. Why don’t the characters read, she asked. Why don’t PIs recognize that they exist in a universe where there are established tropes about what they do and how they act? In Sunburn, it seemed silly not to acknowledge Cain’s influence, so I made it overt. Polly, exposed to films based on Cain’s novels almost by accident, goes on to read all his books. She treats them like instruction manuals—shades of one of Joan Didion’s most famous lines—although Polly is well aware that almost no one in Cain’s universe ever gets away with anything.

When people talk about the great American crime writers of the mid-20th century, they usually invoke Raymond Chandler, Dashiell Hammett and Ross MacDonald. But I think the holy trinity deserves to be a quartet. Cain continues to provoke readers and flummox modern filmmakers. (Todd Haynes’s Mildred Pierce couldn’t be more faithful—or drearier.) Interestingly, it was Chandler, who co-wrote the screenplay for Double Indemnity but quite disliked Cain’s work, who identified why Cain’s books were tricky to adapt. The dialogue was written for the page, not the screen, he wrote to Cain. Spare and naturalistic, it looked as if it should work.

Yet, behind Cain’s back, Chandler said horrible things about him. He said he was like a little boy, writing dirty words on a fence. I find myself obsessed with this fact. How did the man who understood Cain’s work so well on a textual level fail to see its merits? Cain’s work isn’t dirty. It’s gloriously human. It gets the details right, whether it’s the insurance business, pie-making or opera.

My single favorite anecdote about Cain, taken from Hoopes’s biography, was that he declined advances, fearful that he wouldn’t finish his work. As a result, he often received nice large lump sums upon completion of a novel. When he was paid $5,000 for Mildred Pierce—almost $90,000 in current dollars—he treated himself to a snowball machine like the one he remembered from the Annapolis market of his youth. The snowballs weren’t that good. But it made terrific mint juleps.

That detail would be perfectly at home in a Cain novel.

Since her debut in 1997, Laura Lippman has been hailed as a distinctive voice in crime fiction. Recently named one of the "essential" crime writers of the last 100 years, she has produced 24 novels, a book of short stories, a collection of essays, and a children's picture book, and been published in more than 25 languages. A New York Times bestseller, she also has won more than 20 prizes for her work and been shortlisted for 30 more. Her 2019 novel, Lady in the Lake, will be produced as a television series starring Natalie Portman and Lupita Nyong'o. Lippman lives in Baltimore and New Orleans.
http://www.lauralippman.net/ 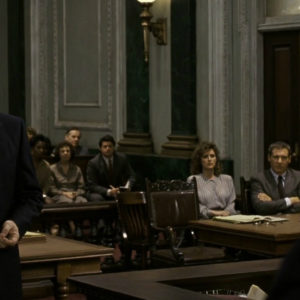 Scott Turow, the bestselling author of Presumed Innocent, The Burden of Proof, Innocent, and other novels, is often said...
© LitHub
Back to top