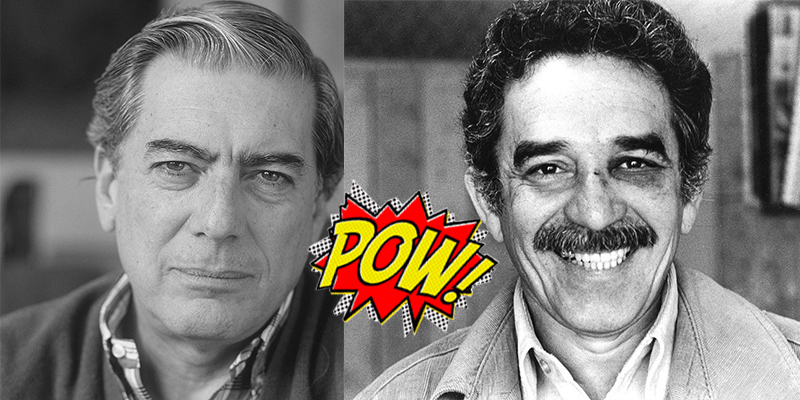 It was about a woman.

We didn’t intend to make “accounts of writers punching one another in the face” a recurring beat on the site, but after the fun of writing our previous piece on the subject, we have decided to continue with more.

It all started with an affair.

While on board a voyage from from Barcelona to El Callao, Mario Vargas Llosa, the celebrated Peruvian novelist, encountered a beautiful woman. He was already married, but this didn’t stop him from pursuing her. According to his friends, he had simply fallen in love. His friend Guillermo Angulo attributed this to Vargas Llosa’s erstwhile flirtatiousness: “Mario has been a great womanizer and he’s a very good-looking man. Women die for Mario.”

Making these matters a bit more complicated was the fact that Vargas Llosa’s wife Patricia was on this same ship, traveling with him. When the ship docked in Santiago, Chile, Vargas Llosa and his new girlfriend left together. Patricia Llosa bought a ticket on a plane straight back home to Barcelona to pack up her things.

Before leaving Santiago, Patricia was visited by their friends, the Colombian novelist Gabriel García Márquez, and his wife Mercedes Barcha Pardo. Though she knew the couple through her husband’s long friendship with the writer, she told them everything.

It’s at this spot in the story where the details get a bit fuzzy.

García Márquez insisted to his friends that Patricia came onto him and he resisted, while Patricia would later insist that the married García Márquez, or “Gabo” as he was known in personal circles, took the friendly task of consoling her to romantic levels.

But García Márquez ended up driving the devastated Patricia to the airport, encouraging her to leave her husband for good. They were late, rushing to make the flight, and according to his friend Plinio Apuleyo Mendoza, García Márquez had said something to Patricia like “If the plane takes off without you, great, we’ll have a party.”

García Márquez and Vargas Llosa, who had been friends for decades, had already been experiencing a rift. Once politically aligned, García Márquez’s politics had begun to move towards the left, while Vargas Llosa’s increasingly hewed towards the right. They had not been the companions that they once had been. When friends heard about their later confrontation, they had assumed that their clash had been motivated by chafing politics.

Regardless, Patricia went home to Barcelona. Angulo said that García Márquez had talked to him about the situation, conflicted. “She’s coming on to me but I’m so fond of Mario that, even though they’re separated… ”

Ultimately, an affair did happen—but not one that anyone could have expected.

Indeed, Vargas Llosa broke things off with the woman he had met onboard the ship, and began to have a new affair—this time, with Patricia, his own estranged wife. They officially got back together, but Patricia was quick to let him know that he had scooped her up in the nick of time. According to Angulo, she told him “Don’t think I’m not attractive. Friends of yours like Gabo were after me.”

It was February, 1976, two days before Valentine’s Day, when the two men met again. García Márquez was filing into a packed movie theater in Mexico City. He and his wife Mercedes were attending a screening of a film about a plane crash in the Andes. Across the room, García Márquez saw his friend, Vargas Llosa, entering the auditorium with Patricia. García Márquez called out his friend’s name and walked towards him, arms open. Vargas Llosa was hurrying towards his friend “Gabo” at an even faster pace.

But when the two men were face-to-face, and García Márquez leaned in for an embrace, Vargas Llosa wound up his right arm.

“For what you tried to do to my wife!” he cried, before slamming his fist hard into García Márquez’s face. The punch was a strong hook, and it knocked García Márquez to the ground. His glasses shattered from the punch, causing a scrap of glass to cut him across the nose.

García Márquez’s wife Mercedes was apparently the first person to say anything. Speaking to the Vargas Llosas, she remarked, “‘What you’re saying can’t be true because my husband likes women, but only very good-looking women.”

A woman from the theater ran to get the felled García Márquez a raw steak for his face. Blood was everywhere, all over the theater floor.

Two days later, the García Márquez couple visited their friend, the photographer Rodrigo Moya. When he saw the pair at the door, he was surprised. García Márquez looked horrible; Moya told The New York Times in 2007, “he looks like he was really beaten up, like beaten up by the Mexican police.”

García Márquez requested that his friend take a photo of his face, which now featured a smeared black shiner over his left eye. He never asked to do anything with the photographs—it seemed that he wanted them for posterity. In fact, the photographs were not known to have existed until 2007. And Moya said that most of the photos he took don’t feature García Márquez looking nearly as chipper.

Standing in Moya’s living room in his large house in Colonia Nápoles, listening to her husband recount the story as his friend snapped photos of his black eye, Mercedes García Márquez, who was dressed in black and wearing a pair of gigantic sunglasses, interrupted the men to sum up the feud in her own words: “Mario is a jealous fool.” 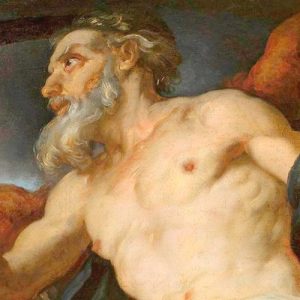 Heartache so universally understood, it's literally biblical: The sins of the father. We look to our dads—and moms, of course,...
© LitHub
Back to top