On the Risks & Rewards of Switching Genres

Listen, I get it. Nobody who regularly follows the notoriously violent Stinky McMalley, Boy Spy novels is delighted when Stinky’s reclusive author Seymour K. Doe comes out with the love story of two septuagenarian gardeners who meet on an Alaskan cruise.

I mean, we’ve all been there, right?

But alienating your loyal readers with a novel that’s a change of pace is a risk a fiction writer may simply have to take. You can’t just slavishly follow popular trends—that seldom works anyway, because those trends move too fast, and the writers who set the trends were following their own storytelling needs and desires. A successful fiction writer runs a worse risk by staying strictly in his or her own lane, telling the same story over and over again, boring yourself and (worse) your readers.

Few who have gone down the popular fiction-writing path did so figuring a quick buck and instant success was in the offing. No, we loved being told stories as kids and grew up wanting to tell stories, too. Soon we were reading books and, unlike more well-balanced readers, we didn’t just want to be entertained—we wanted to entertain. As we matured, interests and experiences and emotions and observations kept finding their way into our work in ways original and distinctive enough for publishers to pay to share that work, generating enough interested readers to keep us afloat.

The first major job of my writing career was taking over the scripting of my favorite comic strip, Dick Tracy, when its creator, Chester Gould, retired. Years later, my friendship with my mentor Mickey Spillane led me into the dream-come-true task of completing his unfinished Mike Hammer manuscripts (Murder, My Love, is a March 2019 publication). Gould and Spillane led me down the path of mystery fiction, with an emphasis on detectives in the noir tradition. Along the way, I’ve been blessed with enough success—including Road to Perdition, the graphic novel that spawned the Tom Hanks film—to be typecast. My Nathan Heller novels have labeled me a writer of historical crime fiction—usually a true crime researched thoroughly and then presented in the form of a private eye novel. Next year’s Heller, Do No Harm, tackles the Sam Sheppard murder case.

In the early 1990s, I yearned to write different kinds of fiction, usually (but not always) in the mystery/suspense area. But both my agent and my various editors and publishers were not anxious for me to muddy the waters with work that varied from what I’d become known for.

Few who have gone down the popular fiction-writing path did so figuring a quick buck and instant success was in the offing. No, we loved being told stories as kids and grew up wanting to tell stories, too.

Then somewhat out of the blue, I got the chance to do the movie tie-in novel of Clint Eastwood’s In the Line of Fire. The book did well. For several decades, movie tie-in novels and TV tie-in novels became a sideline of my writing career. I wrote novels based on some very popular and well-received movies, and had a particularly successful run writing original novels for the CSI TV series.

I had been encouraged to use a pseudonym on such work, but insisted on using my own byline—it kept me honest and attracted new readers to my work. And I got to do horror (The Mummy), western (Maverick), war (Saving Private Ryan), sword and sorcery (The Scorpion King), science fiction (Waterworld), humor (The Pink Panther), and techno-thriller (Air Force One). While tie-in fiction is often dismissed with the same kind of patronizing put-downs as comic books, I found the work rewarding and instructive. I learned things writing outside of my genre that I otherwise would not.

The change-of-pace bugaboo is no stranger to me. My long-running Ms. Tree comic book had a loyal following that included comics fans with no interest in reading books with no pictures, and my other books had mystery fans who wanted nothing to do with books that had pictures in them. But some in both camps did make the jump.

When my wife Barb and I began writing our humorous “Trash ‘n’ Treasures” mystery series, many fans of my noir fiction didn’t join the fun. On the other hand, that series—whose 14th entry, Antiques Ravin’, is out later this year—has brought many new readers into the fold.

My upcoming novel for Thomas & Mercer, Girl Most Likely, sees me overtly taking the risk of changing pace and perhaps throwing my readers a curve. It grows out of my interest in so-called Nordic noir, although I have read precious few of the novels under that banner. My exposure has been through television and film.

What attracted me is the fairly traditional murder-mystery core of such series as The Killing, The Bridge, and the various Wallander adaptations. These tend to combine thriller and mystery elements, with the crimes shocking and even over the top. But the detective protagonists feel more like real people than the genre figures in many American detective novels.

Further, Nordic noir almost always seems to have an element of social commentary and themes of social concern. For example, Varg Veum (too little known here) is in many respects a typical private eye series, but its detective is a former social worker focused on child abuse.

My first toe in these waters was a previous Thomas & Mercer novel, What Doesn’t Kill Her, which owes a debt to the Millennium novels. Girl Most Likely—while invoking the many “girl” titles of thrillers in recent years—owes less of a debt to any specific influence, and more to my desire to do a father and daughter story with an American setting evocative of the Nordic countries.

Krista Larson, youngest police chief in the nation, works in Galena, Illinois, a small tourist town attracting hundreds of thousands of visitors annually. Keith Larson, her father, is a retired homicide cop from nearby Dubuque, Iowa, still grieving over the death of his wife (Krista’s mother). The backdrop is Krista’s own 10-year high school reunion, disrupted by brutal murders.

Superficially, the novel is not so different from things I’ve done before. But the humor is less wise-guy and more dry, the relationships more real. My usual first-person approach has been set aside for third-person and the larger landscape that provides. Ex-homicide cop Keith is no tough guy.

I understand the risks, and the rewards. And ultimately, I think readers—my readers, anyway, including the new ones this approach may well attract—will find the ride as rewarding as I have.

Max Allan Collins is the author of Road to Perdition, the acclaimed graphic novel that inspired the movie starring Paul Newman and Tom Hanks, and of the multiple-award-winning Nathan Heller series of historical hardboiled mysteries, as well as the Quarry series. Collins is one of most prolific and popular authors working in the hardboiled field today. He is also a filmmaker whose work includes "Shades of Noir," "Real Time," and the documentary "Mike Hammer’s Mickey Spillane." Before his death, Mickey Spillane asked Collins to finish his final Mike Hammer novel, The Goliath Bone. Collins' latest novel, Girl Most Likely, is now available from Thomas & Mercer.
http://www.maxallancollins.com/blog/ 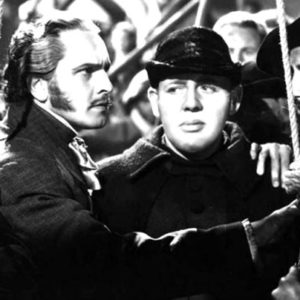 The character of Inspector Javert in Victor Hugo’s masterpiece, Les Miserables, set the standard for the unyielding, driven...
© LitHub
Back to top