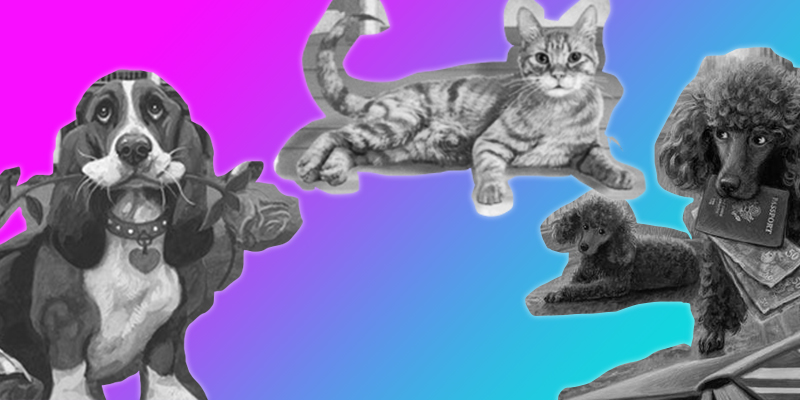 Pick up a copy of any book in my Cajun Country Mystery series and you’ll see a basset hound on the cover—sometimes crafty, sometimes woebegone, but always there. In the series, the Crozat family pet is a male hound named Gopher. In real life, she was our beloved Lucy, who we adopted through the Basset Hound Rescue of Southern California. Lucy crossed the rainbow bridge in 2010 but will live forever on bookshelves, thanks to the talents of my wonderful series’ cover artist, Stephen Gardner. 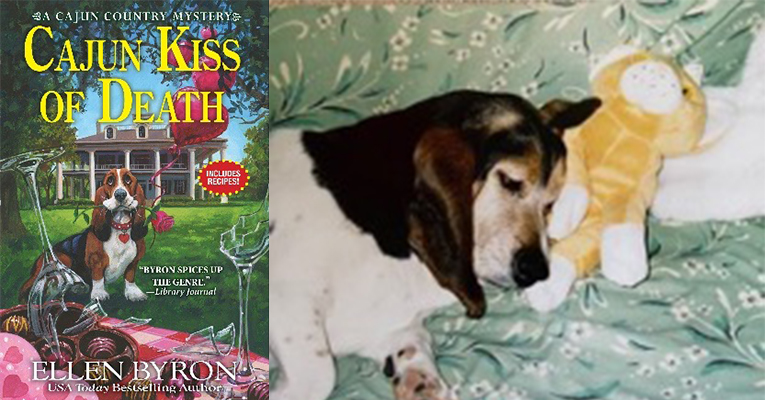 I’m not the only mystery writer whose four-legged friend has served as a cover girl or boy. Here, seven cozy authors share the artistic inspiration they derived from their beloved furbabies. 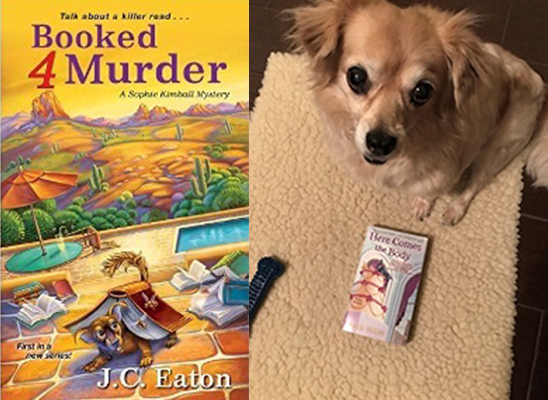 J.C. EATON: When we lost our old coon hound mix, we were devastated, and Jim vowed never to get another dog again. But when we went to the pet store to pick up kitty litter, the Arizona Small Dog Rescue had an adoption going on and this adorable little Chiweenie came over to us, begging to be picked up and held. Well, that was it! Home we went with Streetboy. He was found on the streets in Oklahoma, then shipped to New Mexico, and finally Arizona, his last stop on the train. Hence, the name. When our editor asked us to add a dog to our first novel, we immediately created the fictionalized version of ours and named him Streetman. Their cover design, however, shows a shorthaired Chiweenie and ours has long hair. Still, we know who he is. (And he knows, as well!) 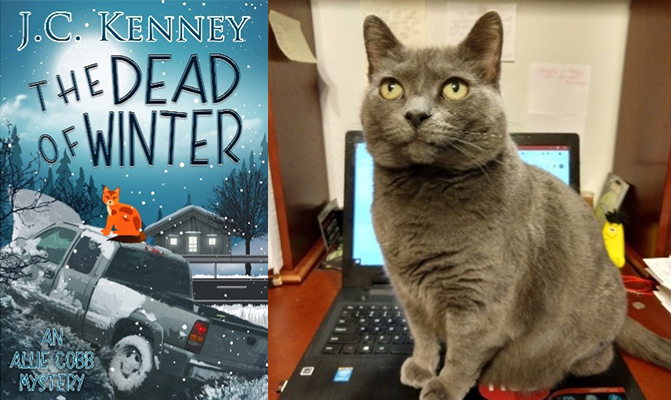 J.C. KENNY: Maria came to our family in February 2014 from the Humane Society of Indianapolis. She’s FIV positive, a condition which can make rescue kitties hard to place. Once we met her, though, there was no doubt we were meant to be together. Maria’s an affectionate kitty who loves to spend time on my lap, just hanging out. She can be bossy, but she also can sense my mood better than I can, it seems. If I’m feeling down, she’s right there by my side with purrs and other signs to let me know she’s there for me. I want to show that caring side of cats. In my Allie Cobb Mysteries, Allie and her cat Ursi are best buddies. Ursi gives Allie a lot of love and support. The relationship goes both ways, too, as Allie adores Ursi. Just like it does in real life with Maria and me. I hope my affection for cats, and Maria in particular, shines through in my books. 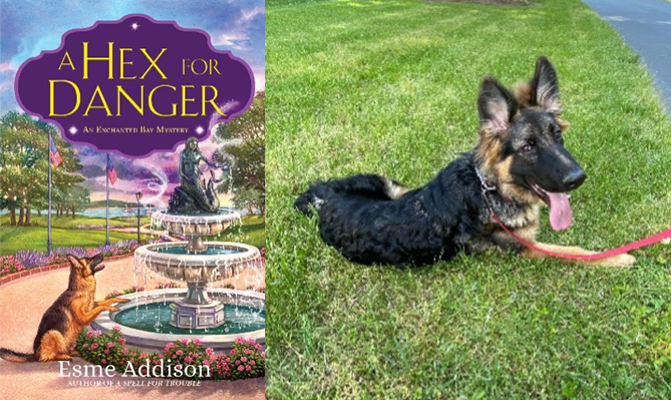 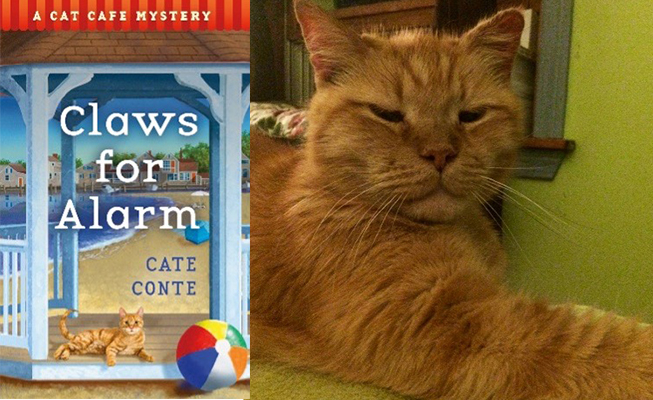 LIZ MUGAVERO/A.K.A. CATE CONTE: Junkyard Johnny was the coolest orange cat rescued (you guessed it) from a junkyard in New Hampshire. He had the cutest face and the funniest sound for a big tough guy—he squeaked instead of meowed. He ended up at the shelter where I volunteered, and I knew I had to take him home. Johnny was a handful from the minute he came into my life, but he was quite a character and I loved him dearly. When I started writing the Cat Cafe Mysteries, he was perfect as a model for the stray cat who walked into Maddie James’s life and adopted her. And the crew at St. Martin’s were more than happy to model the cat on the cover of all the books after one of his pictures! Johnny passed away a few years ago, but this series allows him to live on in the world as well as my heart. 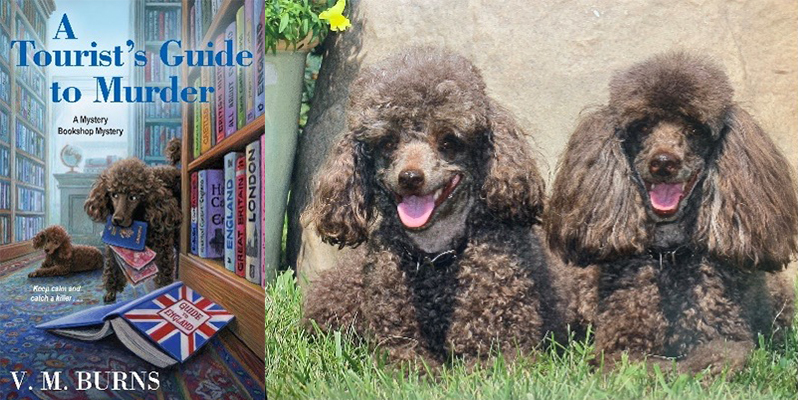 VALERIE BURNS: Coco Chanel “Coco” was born 10/7/1999. She was a chocolate toy poodle and a ball of energy. She was a licker. If you weren’t careful, she’d catch you with your mouth open and…in she went. In 2002, I got another puppy to keep Coco company. Show Me the Money aka “Cash” was also a chocolate toy poodle. Cash’s personality was totally different from Coco. He was a happy boy with a zest for life that never failed to put a smile on my face. He fell in love with Coco at first sniff and was a game for whatever sinister plot she devised. It took Coco longer to realize that she needed this eager fluff-ball in her life, but eventually, they became the best of friends. In the Mystery Bookshop Mystery series, bookshop owner, Samantha Washington’s two toy poodles, Snickers and Oreo are based on Coco and Cash.  Snickers shares Coco’s intelligence and snarky personality, and Oreo demonstrates Cash’s enthusiasm and joy. 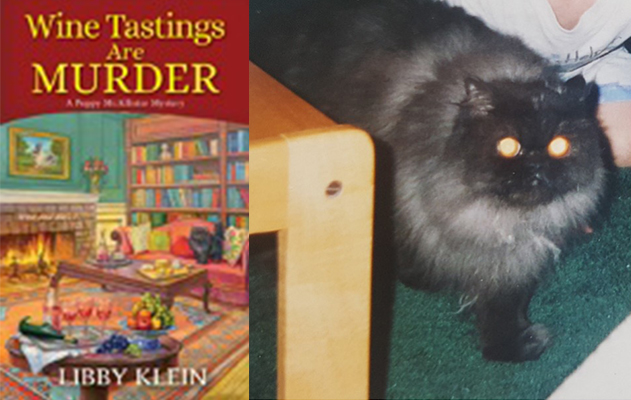 LIBBY KLEIN: Sir Figaro Newton is a black smoke Persian with bright orange eyes who used to scare the bejeezus out of children. One three-year-old cried and said that he looked like a Halloween cat. Even as a little kitten he was bold and adventurous bordering on cocky. He would follow me all over the house meowing for attention—especially if I was making a roast. Ever the opportunist. He wasn’t super cuddly, but he loved to sit next to me and put his paw on my leg. His character in my series has been heavily influenced by his real-life self, and my other fur babies Miles—the flopper, and Miss Eliza Doolittle—the naughty. 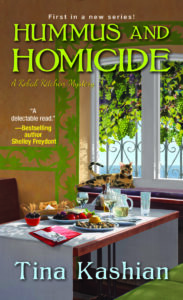 TINA KASHIAN: I have a cat in my Kebab Kitchen series, and he plays a big part in the last book by rescuing Lucy. Gadoo translates simply as “cat” in Armenian. He starts as a stray who keeps hanging out in the parking lot of the restaurant. Lucy’s mom feeds him outside, but the frisky Gadoo keeps finding his way into the back storage room of the restaurant. Lucy ends up adopting him and taking him home. Gadoo is based on a cat I had as a child. My dad found a stray kitten in the parking lot of our family restaurant and the rest is history.

Readers, do you have a favorite author whose pet graces a book cover? Share it with us! 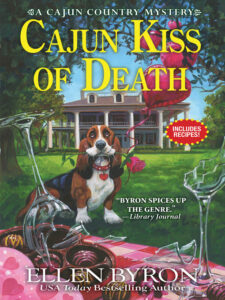 BIO: Ellen Byron’s Cajun Country Mysteries have won the Agatha award for Best Contemporary Novel and multiple Lefty awards for Best Humorous Mystery. She writes the Catering Hall Mystery series, under the name Maria DiRico, and will debut the Vintage Cookbook Mysteries (as Ellen) in June 2022. Ellen is an award-winning playwright, and non-award-winning TV writer of comedies like WINGS, JUST SHOOT ME, and FAIRLY ODD PARENTS. She has written over two hundred articles for national magazines but considers her most impressive credit working as a cater-waiter for Martha Stewart. She is a lifetime member of the Writers Guild of America. https://www.ellenbyron.com/ 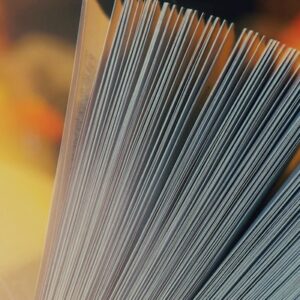 In 1990, after almost two decades spent collecting rejection slips, I finally published a novel, Murphy’s Fault. The book...
© LitHub
Back to top