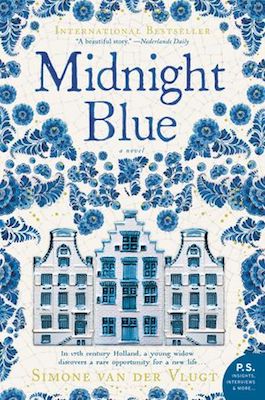 The following is an exclusive excerpt from Midnight Blue, by Simone van der Vlugt, a tale of murder, painting, and pottery, set in 17th century Holland. In the following passage, an artist is blackmailed by a former friend and must get out of town before suspicion falls on her for her husband’s death.

The short walk to Keizersgracht seems to take twice as long as usual. With each step I’m aware of Jacob’s presence and my mind keeps on searching for a way out. As the loss of half my fortune draws nearer, Jacob talks animatedly about the latest news from the village. I don’t hear a single word of it and when we reach the house, I cut him dead.

“I’ll go and get the money, you wait here. If I come back and we’re not alone, pretend you’re collecting payment for a bill.” I turn my back on him and go inside.

I hear the voices of Matthias and Brigitta coming from the back of the house. I rush upstairs to my room in the attic. With shaking hands, I fetch my purse from the drawer under my bed and count out fifty coins. Fifty! I could cry. But I really am getting off lightly. As he said, Jacob could have asked for the lot.

With the coins in a piece of cloth with the corners knotted, I rush back outside. Jacob is standing with his back to me further up the canal, watching the barges go by. At that moment he turns around, as if he can feel my presence. “Have you got it?” I hold out the little bundle to him without saying anything. He opens it and counts the contents. “Great, then I’ll be off.”

“I never want to see you again.”

“Don’t worry about that. Goodbye, Catrin, all the best.” He doffs his cap and walks away whistling.

I watch him go. There’s something about the greedy way he counted the coins that makes me uneasy. Jacob has never been any good with money. He always ran through his wages as soon as he got them, he thought saving was a waste of time. He’ll be back for more.

Over the preceding weeks, I had often wondered whether I would make the same decision as I did back then, when I stood over Govert with a split lip, a couple of fresh bruises and a pillow in my hands. I don’t know. Despair takes over, switches off your mind and clouds the consequences of your actions. The life I would have led if I’d had second thoughts doesn’t appeal to me, but at least I would have had a life. Now I might be free from the blows and kicks, but the internal turmoil that has come in their stead, the specter of the gallows, make for a poor exchange. As long as I’d still believed no one else knew about my crime, it had been different. Now everything has changed. I can’t rely on Jacob keeping his mouth shut, I have to leave. God wasn’t looking the other way when I gave in to my baser instincts and smothered my husband. Now he’s punishing me.

God wasn’t looking the other way when I gave in to my baser instincts and smothered my husband. Now he’s punishing me.

Later that same afternoon, I make a decision. I wait for Adriaan to come back from a meeting in the VOC building and ask to speak to him. He nods, leads me into his office and closes the door behind us.

“Sit down.” He gestures to a chair and sits down without waiting for me. “What do you need to talk to me about? I hope you like it here because I’m very pleased with your work.”

I sit down and straighten my back. “Thank you. I do like it here, and I’d really like to stay but unfortunately I need to give notice.”

“You want to give notice? Why?” “Something has happened.”

“It can’t be so bad that you need to leave. Although . . .” He studies me with knitted brows. “It doesn’t have anything to do with my brother, does it?”

“With Mister Matthias? No, not at all.”

I know that I owe him an explanation. One that will convince him it’s better for me to leave. I take a deep breath and tell him the truth about the painting. That I painted it in Brigitta’s studio, that I used her canvas and paints and replaced them later, that I got myself into an impossible position now that Doctor Geelvinck wants to buy the painting.

Adriaan listens to me with an expression of growing astonishment. “I wouldn’t have expected that of you,” he says finally. “You hear of servants who wear their mistress’s clothes, put on her jewelery or try out her bed. All highly objectionable. I never thought you’d take the liberty of painting in my wife’s studio while she lay sick in bed.”

“I’m so sorry. I should have bought my own materials and sat in the kitchen. It’s only that then I’d have to use the table where we prepare food and there are poisonous substances in paint so—”

“Enough.” Adriaan holds up his hand. “I don’t like it, but I don’t see any reason to dismiss you. Certainly not now that you’ve confessed of your own volition. I’ll make sure everything is resolved with Brigitta’s painting. I’ll have someone buy it and tell Geelvinck that there was a higher bidder. It’s not an issue.”

“There’s something else.” Adriaan’s eyes narrow to slits.

“I’m being threatened by someone from my village. He’s tracked me here and I ran into him this morning.”

“I’m being threatened by someone from my village. He’s tracked me here and I ran into him this morning.”

“Why is he threatening you?”

A silence falls in which I cast down my eyes. “I’d rather not say, sir.”

“Is it someone who you promised to marry or something? Has he come to fetch you home?”

“So you left your village to escape a marriage. But hadn’t you recently been widowed?”

Adriaan heaves a sigh. “Say no more then. It’s a pity you want to leave. Brigitta is happy with you and she doesn’t warm to people easily. I understand you’ve been helping her make paint. She said you were very quick and deft, and now I see why.” He pauses before adding: “I’d like to take a look at that painting of yours.”

I hesitate. “Is it a good idea to walk through the house with it, sir?”

“You’re right, that isn’t a good idea. I’ll come with you.” We leave the office and go upstairs to my room. The little window doesn’t let in much light. I pull out the painting and take it onto the landing where Adriaan is waiting. I hold up the canvas without saying anything.

For a long time, Adriaan studies the half-finished vase while I wait, nervously. Maybe he’ll get angry after all and throw me out without my final wages.

“Do you know what you’re going to do?” he asks finally.

“No, sir. The one thing I’m certain of is that I’m not going home, whatever happens.”

“Do you want to leave Amsterdam?”

“Yes, I think that would be best.”

“The further the better, I assume.”

“What do you think of going to Delft?”

I gawp at him, dumbfounded. “Delft?”

“Is that far enough away?”

“Yes, I think it would be. But if that man comes here and asks where I am—”

“Then I’ll tell him I have no idea,” Adriaan says.

From Midnight Blue. Used with the permission of the publisher, William Morrow. Copyright © 2018 by Simone van der Vlugt.

Reckoning with the Crimes
of Amanda Stott-Smith 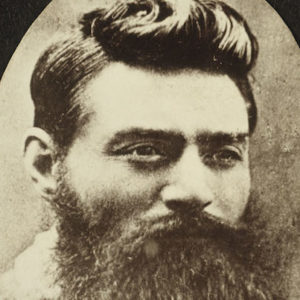 CrimeReads Brief: Week of July 1, 2018 "I think there’s a deep societal fear of female rage, partly because it hasn’t been experienced a lot."...
© LitHub
Back to top