Olivia Rutigliano on the greatest buddy-comedy, road-trip crime movie of all time.

There is a scene towards the beginning of Midnight Run in which the two main characters have their first in-depth conversation. Bounty hunter Jack Walsh (Robert De Niro) and his captured fugitive, an embezzler with a heart of gold named Jonathan Mardukas (Charles Grodin), are seated across from one another in the dining car on a train that’s speeding west from New York to Los Angeles, where Walsh must bring his charge. Jonathan is watching in silence as Jack gnaws on a chicken wing. Eventually he speaks, in a low, grave voice. He asks Jack, “Familiar with the word arteriosclerosis?”

Jack stares back, shoving the meaty end of a drumstick into his mouth. Jonathan continues, in the same quiet, serious tone: “Cholesterol?” Jack still says nothing. “If you want, I can outline a complete balanced diet for you.” Finally Jack responds. “Mail it to me from C-block,” he says, but Jonathan remains undeterred. After a moment he asks, slightly more emphatically, “why would you eat that?”

If this seems like surprising conversation between a bounty hunter and his prisoner, it is because it is, but Jack is determined not to seem taken aback by Jonathan’s questions. As normal as he might present, Jonathan is slippery. He is in this mess in the first place because, while working as an accountant, he had discovered that his firm was a front for the Chicago mob. Wanting to do something good after the years he unwittingly spent helping a sinister outfit, he has stolen $15 million from their accounts, given most of it to charity, and then vanished. Jack has located him rather easily, but he still has to drag him across the entire country in only a few days, and Jonathan is clear that he plans to subvert this plan as best he can, knowing that he will be killed by mob hit-men as soon as he arrives in LA. “I’m gonna have to give you the slip,” he tells Jack matter-of-factly while aboard the train.

It is the story of a pitch-perfect, once-in-a-lifetime friendship doomed by circumstance to be nothing more than a fleeting encounter.

The conversation in the dining car encapsulates the entire dynamic of the two men: Jack’s veneer of tough-guy disaffection and Jonathan’s incessant, slow, slightly-smug undermining of it. It’s clear that Jonathan will soon get under Jack’s skin, if he hasn’t already. In fact, Jonathan is already in control of his journey towards captivity more than Jack would like; they are on a train in the first place because of Jonathan’s severe “aviophobia,” which manifested in an spectacular panic attack after they boarded a plane to LA. After Jonathan’s screaming protests get them booted out of JFK, they journey to Grand Central. Jonathan smiles lightly as they walk towards the train platform; “I love to travel by train,” he calmly tells the frazzled Jack, as if nothing out of the ordinary has driven them to this point. Jonathan is stretching out their trip, looking for ways to trick Jack and escape. But he also is fascinated by the bounty hunter, a man who is his exact opposite but with whom, he realizes, he shares a sense of ethics. He is curious about him. Neither man can deny their instant connection, although they do try hard for a while. 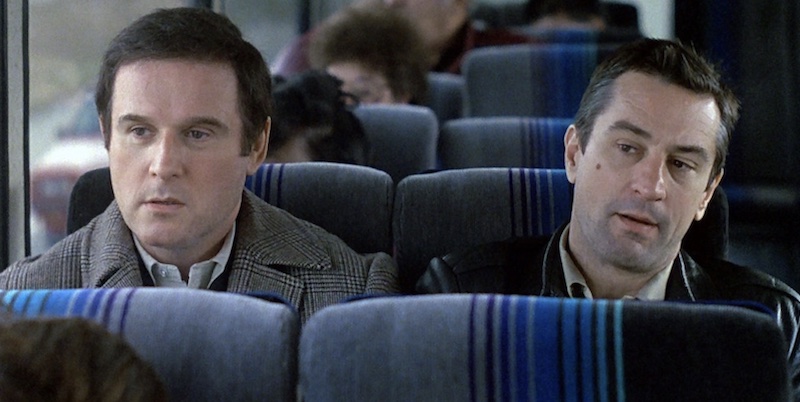 Midnight Run is, in the words of the great critic Alan Sepinwall, “the Casablanca of buddy comedies”; it is a road-trip odd-couple action-adventure but it is also, first and foremost, a tragic love story. It is the tale of a pitch-perfect, once-in-a-lifetime friendship doomed by circumstance to be nothing more than a fleeting encounter.

The special thing about Midnight Run is that “friendship” isn’t merely something that happens to them because of the genre they’re in; it’s something they each really need. Each of them is alone (technically Jonathan has a wife and a dog he loves, but he is also a wanted man who must spend his life in hiding, not the greatest social scenario in the world). That they wind up being pursued by a rival bounty hunter, a gaggle of gangsters looking to kill Jonathan, and the FBI (led by the inimitable Yaphet Kotto as Special Agent Alonzo Mosely), means that for the first time, they also get to experience solidarity against the rest of the world—a beautiful thing, since, until now, both men had been up against all the forces out to get them, by themselves.

Midnight Run was written by George Gallo and directed by Martin Brest in 1988, and was released to critical success. The New York Times film critic Vincent Canby wrote that the film itself was “perfectly serviceable” and that it “might have remained a perfectly forgettable action-comedy if somebody hadn’t had the inspiration to cast Mr. De Niro and Mr. Grodin in the leading roles.” Canby is a little hard on the plot for my money (what’s so wrong with a formula if it’s followed well?), but he is right about where the film burns brightest. De Niro and Grodin have the best platonic chemistry I’ve ever seen on film, and they each alternate in the “straight man” and “lunatic” roles, making the film a true give-and-take.

Grodin, as I’ve written, was a master of the “straight man” shtick, delving so far into the persona of calm normalcy that he revealed the madness inherent in it. Here, though, he starts off as the film’s neurotic foil, with De Niro’s sarcastic, pissed-off bounty hunter the reigning Bud Abbott of the duo. But the two switch in and out of these stock parts, especially once it’s clear that Jonathan, and not the bounty hunter Jack, is the one really calling the shots.

Article continues after advertisement
Despite its frequent laughs, the film’s greatest joy is watching the two men acknowledge their feelings for one another.

Grodin, all the while, plays it cool; his constant comedy comes from his subtle, straight-faced, annoying remarks, peppered with the occasional psychotic outburst. The great fun of Grodin as an actor is that it is never clear when his characters are going to blow. De Niro is a particularly good casting contrast to him because he has made a career out of playing equally pent-up characters, only his have a much wider blast radius than Grodin’s on the off chance they do explode. He creates tension by keeping his cool in circumstances where any other man would easily lose his mind, which is often far scarier a move.

Throwing together two such time-bomb performers, as Midnight Run does, doesn’t yield bombast as much as balance… Jack and Jonathan never go off at the same time. And, since Jonathan is ultimately revealed to be more of a desperate lunatic than Jack, there’s a greater meta-comic payoff in watching De Niro’s Jack flounder haplessly for a few moments, whenever Jonathan does get the better of him.

Despite its frequent laughs, the film’s greatest joy is watching the two men acknowledge their feelings for one another. In the middle of the second act, Jack gets on the phone with Eddie Moscone (Joe Pantoliano), the slimy bailbondsman waiting for them in LA, and yells at him for a double-cross. He shouts that he’s going to screw Moscone by killing Jonathan (thus preventing Moscone from getting a payout from the price on Jonathan’s head). But as he’s yelling this into the receiver, he looks up at Jonathan while shaking his head and frowning, reassuring Jonathan that he would not do such a thing. There are numerous little moments like this—promises, gestures between the two men that cement what they are already starting to realize, which is that they care for one another.

It’s part of the film’s uniqueness that both men actually do understand that they are, of all things, soulmates. They clearly feel themselves being transformed by the presence of the other, forming a bond despite (or perhaps because of) their opposing personalities and secretly-similar worldviews. The film’s beginning suggests a reluctant friendship, but most of the ensuing misadventures actually represent a very symbiotic collaboration. By the end of the film, they don’t want to leave each other. Although they never tell one another directly what they feel, they do allow it to become subtext when they talk. “I think… under different circumstances,” Jonathan tells Jack on another train ride, towards the film’s end, “you and I probably still would have hated each other!,” a joke which sends both men into a fit of laughter, because of course they don’t hate each other at all, they just drive each other nuts.

This connection is foreshadowed in the first dining car conversation, as Jack attempts to turn the tables on Jonathan and pester him with questions for a while. Jonathan explains why he’s in this mess in the first place and why he’s kind of okay with it: “taking $15 million of mob money and giving it to charity was good for a lot of people.” Jack doesn’t buy Jonathan’s goody-goody answer, shooting back, “so you pissed off a mafioso killer just to be loved by a bunch of fucking strangers? That makes a lot of sense.” Jonathan, always determined to destabilize Jack, asks intensely, baldly, vulnerably, “don’t you want to be loved?”

Jack is startled by this question—averting his eyes and deflecting quickly by saying, “lots of people love me!” And when Jonathan hears this, he, who will become the first person to love Jack Walsh in many years, pauses for a second, tilts his head, and then asks, “really?” 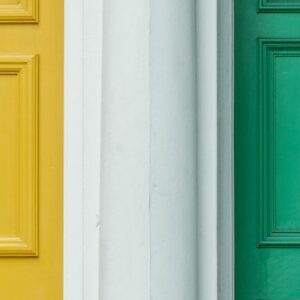 In much of domestic suspense, the scary stuff happens within the same home. It’s husband versus wife, wife versus husband,...
© LitHub
Back to top