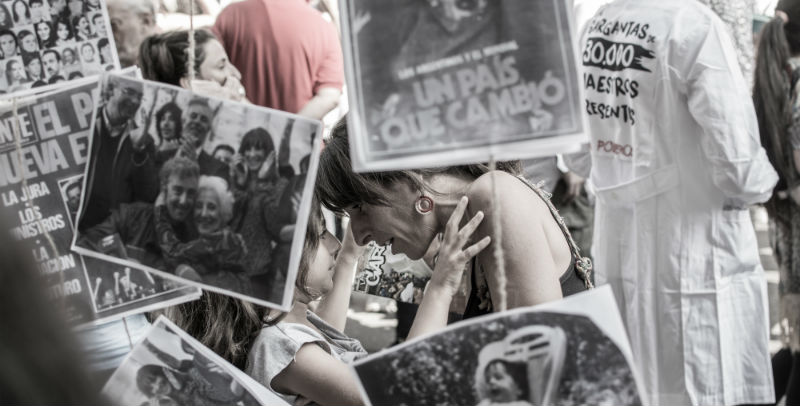 What is the readers’ fascination with books in which young girls vanish without a trace? As an author whose latest book is about one of these ethereal girl children who disappear in the terrifying blink of an eye, I have my own theories. It all stems, I think, from the very basic, visceral concept of The Fear. After our first child was born a friend said to me; have you had the fear yet? I knew immediately what he meant; that icy feeling in the pit of your gut as you step into your baby’s room and for a moment it looks like they’re not breathing; it’s the worst split second of your life. And then they twitch in their sleep, emit a sleepy gasp. Your gut unclenches, the fear passes.

From the moment a baby is placed in your arms you are watching it. You watch it sleep. You watch it eat. You watch for signs of reaching developmental goals, for signs of understanding, of sickness, of tiredness, of hunger. You watch because they are a part of you, taken from you and placed beside you. You watch, because if you don’t watch, you might miss something. Nowadays, even in their rooms, lying in their cribs, we watch them on small screens set on the kitchen counter, or on our smartphones.

The Fear is, I suspect, a relatively modern anxiety. As a child I was left in my pram outside shops while my mother went inside to buy things. My sisters and I were left unwatched in our father’s car outside the pub for an hour or two every Saturday afternoon. I left the house as a teenager with no means of communication beyond a reminder to make a reversed-charges call from a phone box if necessary.

But nowadays we have fewer children, we lose fewer children, we build our lives around the few children we have, our babies are the stars around which we orbit. And now that we can watch our children all the time, we do. Because if we don’t, something might happen. A bad man might hurt our baby. Our eight-year-old might be snatched as she walks home from school. Our fresh-faced teenager might be sneaking out to meet the nice boy on the internet who turns out to be a fifty-year-old paedophile. Without our watchful gaze, our darlings might, just simply, disappear …. 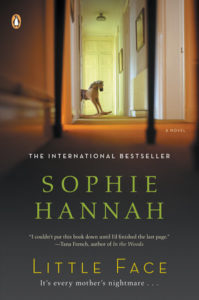 And that is the premise behind the chilling Little Face, Sophie Hannah’s first psychological thriller, published back in 2006. Alice Fancourt ventures to the gym for the first time since giving birth, leaving her two-week-old daughter in the care of her husband. When she gets home two hours later, she discovers that in her absence her daughter has been taken and swapped for another baby she has never seen before. Her challenge is to make her husband and the police believe her. After all, they do say that all babies look alike, don’t they? 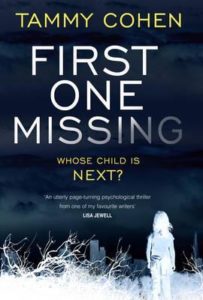 The strapline for Tammy Cohen’s brilliant 2015 thriller, First One Missing, is ‘Whose Child Is Next?’, perfectly tapping into the primal fear that charges through all these books. In Cohen’s novel we have not one missing ten-year-old girl, but four, all of whom have been found brutally murdered with the word “sorry” etched on their limbs. Their parents find mutual succor in a support group. They think the worst has passed. Then another girl goes missing … 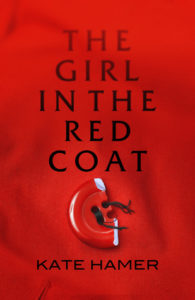 In Kate Hamer’s spellbindingly delicate thriller, The Girl In the Red Coat, eight year old Carmel, prone to hiding, and to getting lost, disappears at an alternative festival in the English countryside. This is a fear that every parent can relate to and is something that has happened to everyone at some point; the blood-chilling realisation that you should be able to see your child, they were right there, literally right there. But now they’re not. They’re gone. And you become a different person; rabid, loud, hyperventilating, aching with desperation. And then they are found and immediately you are unburdened of the terrible gnawing certainty that your life, your happiness, has been snatched from you, that you have entered hell. No such luck for Carmel’s mum who returns home without her child and not one tiny idea where she might have gone. 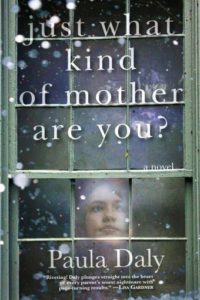 The opportunities for bad things to happen to your daughter grow exponentially as they become teenagers. Teenage girls can be mercurial and unpredictable, whilst also unwittingly desirable and horribly susceptible to flattery and attention. Their social lives begin to eclipse their home lives, they spend increasing amounts of time in other people’s houses, in the care of other parents, parents who in many cases you barely know. And that is the fear laid bare in Paula Daly’s gritty, addictive debut, Just What Kind of Mother Are You? The strapline here is, “Your friend’s child is missing. It’s your fault.” Busy, slightly chaotic mum Lisa forgets that her daughter’s friend is meant to be staying over one night. The next day she is nowhere to be found. 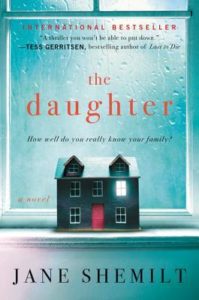 Another chilling debut about a missing teenager is Daughter by Jane Shemilt. Here we meet fifteen-year old Naomi’s mother a year after she has disappeared on her way home from a meal with friends. ‘She turned to go, a little wave at the door. “Bye, Mum,” she said.’ But Naomi never returns home from her night out and nobody knows where she’s gone. A year later her mother remembers a tiny detail about her daughter, something she said just before she disappeared, and this sets her off on a mission to retrace all her steps until she finally uncovers the truth about her daughter. But is it a truth that she is ready to face? 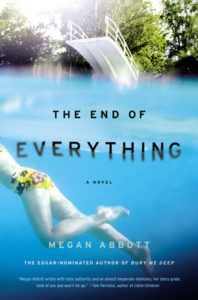 Thirteen-year-old girls are a fascinating subject to write about. They are creatures in flux, neither child, nor teenager, both dusk and dawn, wholly transitional, and more unpredictable than at any other stage of childhood. A thirteen-year-old girl can play dolls with her little sister at ten am and flash her breasts at a man in an internet chatroom at 3pm. Lizzie and Evie, the thirteen-year-olds in Megan Abbot’s The End of Everything are points in question. Inseparable best friends for years, both overwhelmed by their burgeoning sexuality, both on the cusp of doing something dangerous and crazy. Then Evie disappears, and Lizzie is left behind to wonder how well she really knew her best friend after all. 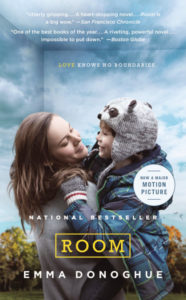 Room by Emma Donoghue shows the reader the missing girl from the inside out. We join Joy in a state of confinement. We can guess exactly what has happened to her as we listen to her young son’s description of their life in a windowless room of 11 x 11, but we don’t really know much about who she was in her before life, or of what she has left behind. We assume she has a mother, that that mother is in a living hell, but we don’t know who she is, where she is, what her pain looks like. We live Joy’s life with her, minute by endless minute.  We are missing with her, we feel the holes and the emptiness of a life stopped short in a heartbeat. It’s mesmerizing and terrifying. It’s every mother’s worst nightmare. 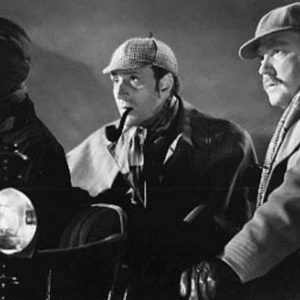 Detective fiction has a solution. That's part of what's satisfying about the genre. The writer creates a puzzle, and then,...
© LitHub
Back to top