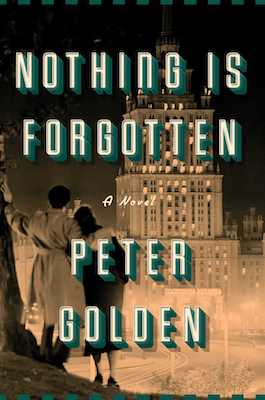 The following is an exclusive excerpt from Nothing is Forgotten, a new historical mystery by award-winning journalist and historian Peter Golden. In the following passage, a boy reflects on a childhood in paranoid 1950s America.

I was never too interested in my family’s history. My indifference wasn’t just the apathy of a kid bored by school and obsessed with rock ’n’ roll; it was because my father and his mother, Emma Dainov, preferred not to talk about it.

“Misha, ne sprashivay,” my grandmother would reply in Russian on those rare occasions I prodded her with a question. Don’t ask.

Still, some of the history was unavoidable because we seemed different from the other families in South Orange and Maplewood, a pair of subur­ban Edens with houses in every style from redbrick Federals to flat-roofed split-levels that resembled spaceships. Our neighbors were hardworking Jews, Italians, and Irish, along with some black families to prove no bigots breathed among us, and at the top of the food chain, a papery-skinned layer of Wasps whose chief purpose, as they perused the financial pages in the gin-soaked ambience of their restricted country club, was to provide some incentive for their social-climbing inferiors.

As a boy, I learned that Daniels wasn’t our original name while I was digging through a trunk in the basement and found my father’s passport from the Soviet Union, with its faded green cover and strange lettering. I was holding the passport when my father, a wan, asthmatic beanpole with a Brylcreem-resistant cowlick, came down with a laundry basket, a chore he had handled ever since my mother refused to separate his lights and darks.

“You the detective now?” he asked in his slightly accented English, peering at me through his pince-nez.

I shook my head, and he smiled a little sadly—the Russian smile, my grandmother called it, like a weak sun in a winter-gray sky.

I shook my head, and he smiled a little sadly—the Russian smile, my grandmother called it, like a weak sun in a winter-gray sky. Then he said that in 1934, at the age of eleven, he had landed at Ellis Island with his father, whose imagination was aflame with Yankee-Doodle dreams of strik­ing it rich, which was why he Americanized their surname from Dainov to Daniels, and my father’s first name from Lev to Lawrence. My grandfather died before I was born, leaving Larry Daniels to run his empire—Sweets, a candy store on Irvington Avenue, a five-minute walk from our modest Colonial in South Orange.

The name change was odd enough, but what perplexed me was why he had emigrated to the United States without his mother. My father squeezed the rubber bulb of his nebulizer and cleared his airways by drawing on the mouthpiece before he wheezed, “My parents had a divorce, and my father, he took me away.”

Divorce wasn’t fashionable in those days, so my grandparents splitting up was further evidence of our family’s difference, but it—and the mu­tation of Dainov into Daniels—might have remained a minor puzzle had I not been the baffled owner of four first names. On my birth certificate, I was Michael, and that was the name my mother and teachers used. My father called me Mikhail, and to my grandmother I was Misha, short for Mikhail, or Mishka, an affectionate form of Misha. This left me with a touch of multiple personality disorder and was a point of contention be­tween my parents.

My father’s English was excellent, though out of some nostalgia for his boyhood, perhaps, and undoubtedly to irritate my mother, he often spoke to me in his native language. I didn’t mind. It was cool using words none of my friends understood, and I needed Russian to understand my grandmother. She insisted that I answer her in English, because my father was completing his degree in accounting at Seton Hall University—a few blocks up Ward Place from Sweets—and he wanted his mother to take over the business after he passed his CPA exam and opened an office.

My mother, a violet-eyed beauty with a pug nose and poodle-cut hair she dyed a shimmery copper, hated that my father spoke to me in Russian. She was born in New Jersey and lorded it over her husband, as though hailing from the Jewish ghetto of Paterson, with parents who worked them­selves to death in that city’s silk mills, qualified her to be next in line for the British crown, a view of herself fortified by the fact that after high school she had masqueraded as an Episcopalian to work as a secretary at a law firm in Manhattan that didn’t hire Jews.

My father, needling his wife about her pretensions, frequently referred to her as “Queen Shirley the First.” Nor did he stop conversing with me in Russian even after the blowup at Clinton School with my fourth-grade teacher. Miss Smethers was an elderly taskmaster whose dark dresses gave off a whiff of mothballs and who would order you to stand by her desk and face the class if she caught you smiling. On this morning, she was writing multiplication problems on the blackboard while in my head Big Mama Thornton was singing “Hound Dog,” a bluesy wail that I—and the deejay Jocko Henderson, the self-proclaimed Ace from Outer Space—couldn’t get enough of. I was sketching Big Mama’s face on my math homework—the big grinning face with the devilish eyes I remem­bered from an album cover in Village Records—when suddenly students were turning to gawk at me, and Miss Smethers said, “Michael, we’re waiting for your answer.”

You couldn’t admit that you weren’t paying attention, not if you wanted to avoid standing in the place of shame. Without thinking, I replied, “Ya ne znayu.”

The class broke up as if I’d cut the world’s loudest fart instead of saying that I didn’t know. Miss Smethers, believing I’d cursed her out, marched me to Principal Furrie’s office and, before returning to the class­room, suggested he wash out my mouth with soap. The principal was a jolly rotund fellow who combed his hair east and west to hide his baldness. I explained that I’d spoken Russian by accident. He nodded sympatheti­cally, then phoned my mother. For the last week she’d been going on about a sale at Bamberger’s—arguing with my father about her spending limit—and I hoped she wasn’t home. No such luck—she stormed into the princi­pal’s office, eyes blazing. Mr. Furrie told her what happened and asked if I’d ever been dropped on my head as a baby, which could account for my confusing two languages.

“My husband’s a schmuck,” my mother said. “That’s why he’s confused.”

Grabbing my shirt collar, she dragged me through the school yard to her Country Squire and drove to Sweets, where my father was arranging packs of cigarettes in the honeycomb behind the cash register.

After telling him why I wasn’t in school, my mother said, “I told you to stop with the Russian. Everyone’ll think Michael’s a commie spy.”

“Hollywood was blacklisting directors, actors, and screenwriters if they’d ever taken a sip of vodka.”

This was the 1950s. Ethel and Julius Rosenberg had been sentenced to die in the electric chair for selling atomic secrets to the Soviets; Sena­tor Joseph McCarthy had accused everyone except President Eisenhower’s parakeet of spying for Moscow; and Hollywood was blacklisting directors, actors, and screenwriters if they’d ever taken a sip of vodka.

“Calm down, Shirley. You’ll have stroke.”

I piped up. “Will I get to miss school?”

My mother whipped off her shoe and, with the spiked heel, swatted my backside. A geyser of pain shot up my spine. She wasn’t shy about hitting me, but I refused to cry; she might enjoy it. The enraged stoic—that was me.

Glaring at my father, she said, “This is your fault,” and then she was off to Bamberger’s.

I looked at my father. He shrugged helplessly. “Mikhail, you shouldn’t use Russian with your teacher.”

And you, I recall thinking, shouldn’t let your wife smack your son with a spiked heel. 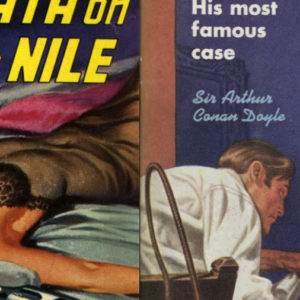 When Classic Detective Novels
Became Sexy Pulps Twentieth-century detective novels are intimately tied to the history of the pulps. Many works we now consider classics in the genre...
© LitHub
Back to top