The following is an exclusive excerpt from Of Mutts and Men, by Spencer Quinn. The world's most beloved canine narrator, Chet the dog, is back. When and his human partner, PI Bernie Little arrive to a meeting with an esteemed hydrologist, they are shocked to find the scientist dead. But when the police arrest the wrong man, and Chet starts smelling water where he can't see it, they know something very strange is afoot.

Hands up where we can see them is one of our best techniques. Humans can’t do much in a fight without their hands. Biting— except in dentist-hygienist cases, as I mentioned—is pretty much a non-factor, which leaves kicking, and most humans are slow and clumsy when it comes to kicking, although we have run into an expert kicker or two. Take Joe Bobb Wu, owner of Wu’s Wonderful World of Martial Madness—a spot on the wrong side of the tracks in Rio Vista, where both sides of the tracks are wrong— that turned out to have martial madness in front and a meth lab in back. Joe Bobb had lost his temper a bit when Bernie and I discovered the meth lab part—we’d been so palsy until then— and he’d come flying at Bernie feet first, high off the ground and lashing out with speedy kicks at Bernie’s head. At least in his mind. But in real life, the moment that leading-edge foot just twitched, who was up in the air with him, grabbing him—yes, this is pretty amazing—by both pant legs at once? I think you know the answer to that one.

Back on board the blue boat, we had what you might call the beginning of a problem, namely this huge dude on the bunk not getting his hands up where we could see them, but in fact sliding them under his pillow, a stained pillow with no pillowcase. Here’s something funny about Bernie: he won’t sleep on a caseless pillow. No matter how tired he is, or even if he’s had a teensy bit too much in the bourbon department, and he comes home to find no pillowcase, he roots around for one, maybe in the laundry pile, and puts it on.

Florian frowned. “How do you know my fuckin’ name? Who the hell are you, anyways?”

“Okeydoke,” Florian said. And slow and easy, like a nice, cooperative perp, he slid one hand out from under the pillow. But after that, things speeded up. First, out came his other hand, real quick, and not empty. A knife? In some ways knives are scarier than guns, but no time to get into the reasons, if any. This was a long knife, the blade golden for a moment as it passed through one of those shafts of sunlight, and then silver as Florian came lunging toward us in the shadowy cabin. Yes, a huge guy, one of those mountain-of-a-man types, surprisingly quick and seeming to fill the whole space. He raised the knife high, his face all twisted from the force he was gathering inside himself, and stabbed down at Bernie. At the same time, I flew right at him. And also at the same time, not looking like he was in any kind of hurry, Bernie launched that sweet, sweet uppercut.

A lovely sound. Bang on the chinny-chin-chin. Florian’s eyes fluttered up, his eyelids fluttered down, he toppled backwards, and I soared right over him. The knife clattered down on the floor. Bernie picked it up.

“That’s not the way to attack with a knife,” he said. “First of all, you hold it like so. And the motion is this, not that.” Bernie demonstrated the motions. Who for? Florian was out cold on the cabin floor and I had no need for knives or weapons of any kind. I was . . . a weapon all by myself! What a thought! Did you get smarter as life went along? Something to look forward to.

We got busy, Bernie taking out the plastic cuffs, flipping Florian over and cuffing his enormous wrists nice and tight behind his enormous back, and me . . . well, just sort of tidying up, if taking care of that last slice of pizza counted as tidying up. Meanwhile Bernie found some bungee cord, flipped Florian back over, and then bungee-corded his legs together from ankles to hip.

Bernie sat on the bunk, the wallet and the knife on his knee. “Wendell’s wallet, murder weapon, murderer,” he said. “The whole package in”—he checked his watch, not the one that had belonged to his grandfather, our most valuable possession, currently with our buddy Mr. Singh at Singh’s Pawnbroker and Financing for All Your Needs shop, but the everyday watch, that had come in a cereal box—“less than three hours. This could be some kind of record, big guy.”

I sat beside Bernie, got patted a bit. We really were pretty good. For a moment I thought: Who is paying? A bothersome thought and it quickly vanished. We waited peacefully, nice and comfy in this blue boat in the middle of the wide wide desert.

After a while, Bernie gave Florian a little kick, not hard, on the sole of one of his huge, bare, and toe fungusy feet. Florian groaned. Bernie gave him another kick. Florian groaned again and his eyes fluttered back open. He . . . how would you put this? Took in the situation? Something like that. That went on for what seemed like a long time. At last he spoke.

“Whaddya want from me?” he said.

Bernie’s eyebrows have a language of their own. Now they rose in a very interesting way that made Bernie look like the huge one and the huge guy look small.

“Nothing,” Bernie said. “We don’t want anything from you.” He glanced down at the wallet and the knife, still resting on his knee. Very slowly, Florian’s little eyes shifted in the same direction, gazed at the sight in a confused sort of way, like he didn’t quite understand what he was seeing.

Bernie didn’t like that, not one little bit. He didn’t show it on the outside. Was Florian sensing what I was sensing? Probably not, and maybe if he’d been back on his feet and unbound, he’d have been in big trouble. But right now he was safe from harm. Bernie would never hurt someone tied up, not even the worst of the worst. Was Florian the worst of the worst? We’d only come up against one single man who was the worst of the worst for sure. That was at the end of the broom closet case, the only one where we’d failed completely. We’d found the missing kid—Gail was her name—but not soon enough. Later that night, we’d taken care of justice ourselves, me and Bernie, also a onetime thing in our career. After it was over Bernie had said we had to forget what we’d done and never think of it again. Yet here it was back on my mind, and not for the first time.

Bernie rose, opened the wallet, took out the driver’s license, and held it for Florian to see. “This is who he was,” Bernie said.

Florian’s face scrunched up in thought, not a pleasant sight. Then his eyes opened wide. “Wait a goddamn minute. You think I killed that old man?”

Bernie didn’t answer, simply pointed at the long knife, resting on his knee.

“But . . . but that’s crazy!” Florian said. “That knife never leaves the boat. It’s under my pillow at all times.”

“Why would that be?”

“Any of them on the inside?” Bernie said. “Because that’s where you’ll be spending the rest of your life. Unless you get the death penalty, still a real possibility in this state.”

“You . . . you bastard!” Florian starting wriggling around on the floor. “You’re framing me.”

“Oh?” said Bernie. “This”—he gave the wallet a little shake— “was lying right there when we came in.” He pointed to the console.

“So what?” said Florian. “Maybe I stole the wallet. But that don’t make me a murderer. The old man was dead when I got there.”

“Like I said—he was dead when I went in the trailer, sitting back in his chair, throat cut from ear to ear. I almost had a heart attack, for Christ’s sake. But then I happened to see the wallet, lying right out there on the desk. So I made myself go up and take it. Not easy, I can tell you. The sight was like . . . like a fuckin’ horror movie. The slasher kind. I hate those.”

He studied Bernie’s face. Good luck with that, amigo. When Bernie wants his face to show nothing it doesn’t. Florian was getting nowhere. Where was he even hoping to get?

“Well, Mr. Little, one more thing, going back to the . . . the situation in that trailer. I’m not a lawyer, but is taking something that belongs to no one theft? See what I mean?”

“Belongs to no one?” Bernie said.

Bernie looked down at Florian, gazed at him for what seemed like a long time. A bright sort of hopefulness rose in Florian’s eyes, one of those perp things you saw from time to time.

“What about his phone?” Bernie said. “His computer?”

“You had no problem taking the wallet, but the phone and the computer were a bridge too far?”

Bernie gave him another look. This one made Florian turn away.

Bernie gave Florian a look. “Ever had any concussions?” he said.

“Hell, yeah. You just gave me one, for Christ’s sake. With that sucker punch.”

“Um,” Florian said. “No offense.” From somewhere overhead came the sound of the beating wings of a big bird, probably heard only by me.

“What were you doing at the trailer in the first place?” Bernie said.

“I was just ATVin’ around, happened to come across it. Had no idea anyone was inside, else none of this would ever have happened.”

“I believe that part,” Bernie said.

“One hundred percent. But then when you did go inside, there was this rather well-known scientist working at his desk. An old man, but feisty. He didn’t like you coming in uninvited, didn’t cooperate when you demanded his wallet. So”—Bernie took out two baggies, big and small, tucked the knife in one and the wallet in the other—“some sort of scuffle broke out and your temper got the best of you, just like it did when Chet and I came in here, and you went for the knife, also just like in here.”

“No!” Florian shouted. His face went red, bright bright red, although Bernie says I can’t be trusted when it comes to red. “I’m tellin’ you the truth! This is a frame-up. You cut his throat and—and—”

By that time Bernie and I were back outside, and Florian sounded much farther away than he really was. Bernie walked around the boat to the back. Stern, was that the name? There’s all sorts of boat lingo, which I’d learned on our San Diego trip but mostly forgotten. Bernie scraped some dirt off the peeling paint and read: “Sea of Love.” Then came a long silence. After that he took out his cell phone.

“Bernie Little here,” Bernie said. “There are tides in the affairs of men, Deputy Beasley.”

I was with Beasley on that, but would never admit it, especially not to myself. 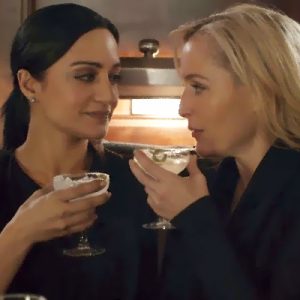 A Brief History of Queer Women Detectives in Crime Fiction I spent my teenage years reading mysteries and realizing I was queer. The two pastimes aren’t exactly connected, but they...
© LitHub
Back to top