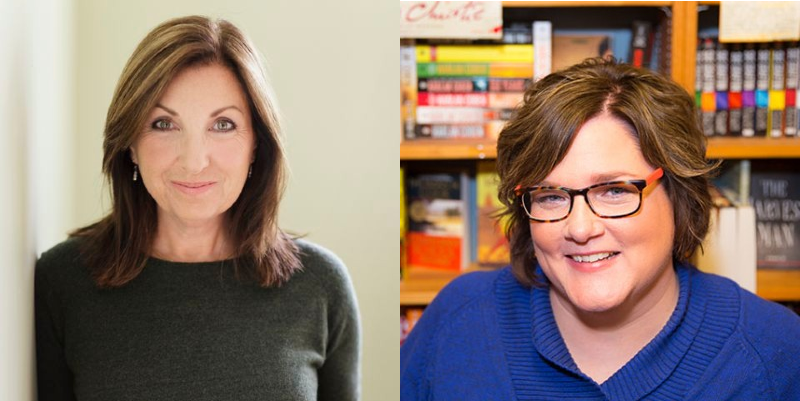 My new novel, The Lucky One, tells the story of a woman who takes up with a community of online amateur sleuths. The real kind. My early efforts to try and understand how an actual online sleuth would work and how a true-crime community like this would function—and break down—led me directly to a book called The Skeleton Crew: How Amateur Sleuths Are Solving America’s Coldest Cases by Deborah Halber.

Halber’s book follows several sleuths as they chip away at long-cold cases of missing and unidentified people, trying to make matches between those who’ve disappeared and bodies found without ID. The Skeleton Crew was, for me, a case of the perfect book falling into my hands at the right time. I was especially thrilled that Halber detailed the story of Wilbur Riddle, Todd Matthews, and “Tent Girl,” the thirty-year case of an unidentified woman’s body found in Kentucky. (Riddle found the body and his eventual son-in-law Matthews took to the early-internet forums to solve the case. Thanks to them, Barbara Ann Hackmann Taylor’s family now knows where she is buried.) Matthews is one of the original founders of the Doe Network, the website I was using as the basis for my fictional online community.

Halber’s book was first published in 2014, before the onslaught of true crime podcasts and documentaries, before Murderinos, before the Golden State Killer arrest, which may or may not have been made possible by the tenacity of amateur sleuths like Michelle McNamara, whose book I’ll Be Gone in the Dark I also read for The Lucky One’s research. The Skeleton Crew was blurbed by none other than Sue Grafton, a fact that probably adds to the feeling that Halber’s book came out ahead of this true-crime moment. Graft loved it, by the way. 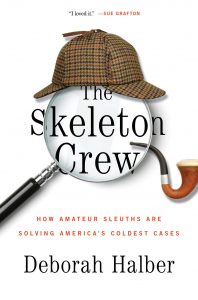 As part of my research for The Lucky One, I interviewed Matthews, who encouraged me to change anything I needed about the way the Doe Network really worked. For instance, online sleuths work alone, at home, most of the time. That’s kind of their thing. Here’s how Halber put it in her book: “Anybody with an idealistic bent, a lot of time, and a strong stomach could sign on: a stay-at-home mom in New York, a chain store cashier in Mississippi, a nurse in Nebraska, a retired cop and his exotic-dancer girlfriend in Houston. Venturing into the web sleuths’ demimonde of alias and screen names and pseudonyms…they were an underground society whose members wouldn’t recognize each other if they passed on the street…” In The Skeleton Crew, the solitary sleuth’s isolation is part of the story. For The Lucky One, I planned a Chicagoland meet-up for my sleuths and got them jostling against one another’s nerves in meat-space. I had to get the facts wrong, in this case, to get the story right.

What The Skeleton Crew really lends to The Lucky One is that day-to-day detail I would have been hard-pressed to imagine. Who would dedicate their life to such a pursuit, and how might this obsession start to color how they saw the world? Through Halber’s book, I met “Mike,” who wears some masculine jewelry, a thick bracelet and two rings. Halber wrote: “These rings, he noted in the same confiding tone he might use to give me a promising stock tip, were exactly the kind of distinctive details that came in handy when identifying a body.” Mike’s stock tip paid off for The Lucky One’s Alice Fine, who always notices when she meets someone new “the scratches and dents” that a human body collects, “…the details of a life that, once noticed, could only lead home. That crooked tooth, the birthmark on the back of the neck, that scar from a childhood fall. Set dressing that turned out to be structural.”

Halber’s book was a lucky find for me—but it’s also a snapshot of a very particular hobby that few would ever undertake, and it’s endlessly readable. Another lucky break: I finagled an introduction to Halber, and had the chance to ask her some questions about The Skeleton Crew and her work putting more truth into true crime.

Lori Rader-Day: Where did the idea for the book The Skeleton Crew start for you? How did you decide on which stories to document and which people to spend time with?

Deborah Halber: I came across a story in The Boston Globe about the unsolved murder of the Lady of the Dunes, a murder victim who had been brutally disfigured and left in an idyllic cove along the Cape Cod National Seashore. The image accompanying the story was a digital reconstruction that looked exactly like a photograph of a stunning young woman. When I googled Lady of the Dunes, I realized there was a small city of people across the country who, like her, had lost their identities after death. And I also realized there were amateur sleuths working feverishly to identify them.

LRD: What were the challenges of writing the book?

DH: Many of the amateur sleuths used pseudonyms, and there was a lot of nastiness festering in the online forums they used to post their theories about the victims. I wanted to meet these people, but they scared me.

I was particularly leery of one web sleuth who had been banned from multiple forums.   She routinely got into knock-down, drag-out fights with other web sleuths, including a really nasty series of encounters with a former Texas sheriff. She lived in the middle of nowhere in South Carolina and I had no idea what I was getting into when I went out there to meet her. Spoiler alert: I survived. And venturing into morgues definitely forced me out of my comfort zone.

LRD: At the time you wrote the book, what was the general feeling about internet amateur sleuthing? Tell me about the response the book got or that you got when you did spoke about it.

DH: People love the idea of web sleuths. It conjures up notions of armchair detectives playing Sherlock Holmes in real life in their spare time. [The website] websleuths.com had tens of thousands of users. But I wanted to concentrate on people who were trying to make a difference in one relatively unknown, macabre backroom within the online world: those who were willing to pore over autopsy photos and police reports to try to identify unidentified victims. The people and cases I profile in the book were—and still are—a fascinating segment of society.

LRD: I’m fortunate that your book came out when it did so that I could read it when I needed it—but do you think you were somewhat ahead of your time?

DH: In one sense, my book came out at the end of an era. The all-volunteer Doe Network had helped make law enforcement around the country aware of the limitations of purely local efforts to identify bodies and missing persons. By creating national and international databases, they were able to do what local law enforcement could not: match a missing person to a body that turned up far from where the person originally went missing. The amazing result of these volunteer efforts is the National Missing and Unidentified Persons System (NamUs), a Department of Justice effort that exactly mimics what the Doe Network had created with the primitive tools of the early Internet.

LRD: What do you think about the current surge of true crime storytelling—is there anything you worry about or wish someone would ask you about?

DH: As someone who started her career as a diehard newspaper reporter, I’m firmly in the camp of doing the reporting, giving opposing sides equal time and letting the facts speak for themselves. I believe journalism has immense power to right wrongs—wrongful convictions, for sure—but when the criminal justice system, flawed as it may be, revisits a case that was picked apart in the media and still finds no cause for a new trial, maybe it’s time to consider that a podcast producer isn’t better qualified than a judge and jury to determine guilt and innocence.

LRD: What are you working on now?

DH: I’m working on a narrative nonfiction piece about one of Massachusetts’ oldest unsolved murders. It’s full of twists and turns, quirky characters and unlikely coincidences. Fact can most definitely be stranger than fiction.

LRD: Sounds right up my alley. Can’t wait to read it.

Lori Rader-Day is the Edgar Award-nominated author of Death at Greenway, The Lucky One, Under a Dark Sky, The Day I Died, Little Pretty Things, and The Black Hour. She lives in Chicago but drinks her builder’s tea English, with milk.
https://loriraderday.com/ 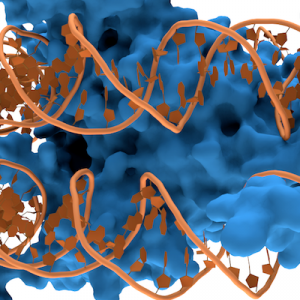 Since I teach Creative Writing as well as doing the thing myself (19 novels so far), I always include a section on how professional...
© LitHub
Back to top