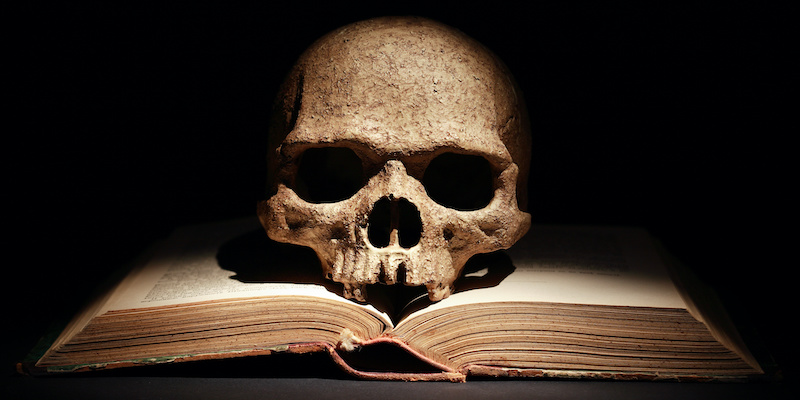 "Horror ﬁction and dark fantasy, at its best, can teach us how to survive real fear."

(Adapted from the introduction to The Year’s Best Dark Fantasy & Horror, Volume 3, edited by Paula Guran.)

Poverty, inequality, climate change, violence, disease and so many other evils—real life is frightening.

Why, then, would anyone want to read dark fantasy or horror?

One traditional view of why we enjoy horror—because it gives us a feeling that bad stuff can be overcome and order restored—may be true, but today’s dark ﬁction often challenges and discomforts, even in these challenging and uncomfortable times.

The ﬁction of H. P. Lovecraft and Stephen King and many others arose after the societal nightmares of the first world war and a worldwide influenza pandemic. The theory is that such fiction became a way we psychologically coped with modern fears.

However, and very simplistically, that “we” was primarily the “we” of the empowered; written from the viewpoint that, generally, the universe was a fairly balanced place where fear intruded. Too often, what “we” feared was frightening because it came from “outsiders”—ﬁguratively and even literally people who were not “us” were the monsters. The discomforting “other” was deﬁned by those who were the most comfortable.

Lately, some of the best dark ﬁction has been grounded in the perspective of those who aren’t so comfortable to begin with. Protagonists who already deal with the history and daily reality of prejudice, oppression, injustice, and lack of empowerment. They come from and, after defeating the evil, often return to a life where there is little if any complacency. Yet these ﬁctional heroes still confront terrors and survive the monsters.

Horror ﬁction and dark fantasy, at its best, can teach us how to survive real fear. It portrays both what is truly terrifying and what is nothing more than ﬁgments of imagination. That there are different kinds of evil to confront and defeat. It tells us, no matter what, we can ﬁght back and survive the monsters, or, at worst, we can put up a damned good ﬁght and leave behind a story worth telling.

Not surprisingly, since I annually compile The Year’s Best Dark Fantasy and Horror, I read a great deal of current dark fiction. I’d never consider my observations trends per se, but here are just a few themes I’ve noticed popping up in short dark fiction—some relatively new, others not new at all—in the last couple of years that may give some clues how modern writers are telling those worthwhile stories.

Historically based horror is particularly powerful because reality is so much more horriﬁc than ﬁction. Looking back is another way of dealing not only with the past but confronting the present.

Conversely, fairy tales, myths, and folk tales are not realistic at all. But they remain highly relevant to us all on both personal and societal levels. Culture and history—these days, not always European-based lore—are revealed in such tales. They are reflections of both our dreams and our fears. Modern writers are, more than ever, adroitly using these often-ancient motifs in new ways to effectively reach our psyches.

I often choose stories for Year’s Best set in the future. In some cases, the futures involved seem so close, so logical, that I’m not sure they can really be considered science fiction. In some cases, more of the supernatural is involved in the future than science. Stories about altering the human genetic code, climate change, governmental and political upheaval, and—perhaps least surprisingly—the world altered by pandemics and other overwhelming disease are common.

Old age. Not so much the fear of aging (and therefore dying) or aging itself but dealing with the folks who are aging and dying. Or the elderly coping with it themselves. Which brings us to the related theme of family. Biological families and chosen families. The ties that bind, that are sadly sundered, and that sometimes must be unbound. The particular fears that having children and loving those children inspire. Monsters that prey on children and children who are themselves monsters.

Sometimes, but not always, an extension of “family” is where those families—or individuals—reside. Homes, houses, and other domiciles often play important roles in recent fiction. Not traditional “haunted house” tales, but the concept of “home.” Perhaps the inspiration simply arises from the fact that folks had to stay home more than usual for a while was an influence.

That said, the outdoors—woods, sort-of-woods, yards, bodies of water, caves—are common settings in many of the most recent batch of my selections. Maybe we are grateful to get out of the confines of four walls now and want to be anywhere but home. Even if we find those surroundings less than bucolic, perhaps we want to escape to such—and then escape from them!

Of course, there are many more ideas reflected in the fine tales crafted in a variety of ways that I chose and present to you in every volume of The Year’s Best Dark Fantasy and Horror. Each story, each writer is unique. As Anna Quindlen once stated, “…each writer brings to the table, if she will let herself, something that no one else in the history of time has ever had.” That stories and writers and their approach to those stories are all so different while still resonating with us in a common human way gives me some faith that we may yet be able to keep reality from being overtaken with darkness. 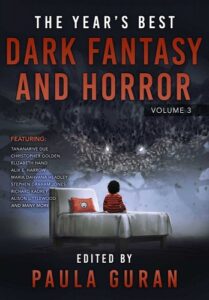 Adapted from the introduction to The Year’s Best Dark Fantasy & Horror, Volume 3, edited by Paula Guran. Copyright © 2022 by Paula Guran. Reprinted by permission of the publisher, Pyr.

Freelance editor, anthologist, and reviewer Paula Guran was senior editor for Prime Books for seven years. Previously, she edited the Juno fantasy imprint from its small press inception through its incarnation as an imprint of Pocket Books. In addition to the annual Year's Best Dark Fantasy and Horror series, she's edited many other anthologies. In an earlier life she produced weekly email newsletter DarkEcho (winning two Stokers, an IHG award, and a World Fantasy Award nomination), edited Horror Garage (earning another IHG and a second World Fantasy nomination), and has contributed reviews, interviews, and articles to numerous professional publications. 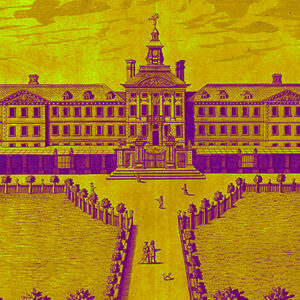 My historical crime novels The Bloodless Boy, The Poison Machine— out on October 25!—and a subsequent sequel The...
© LitHub
Back to top